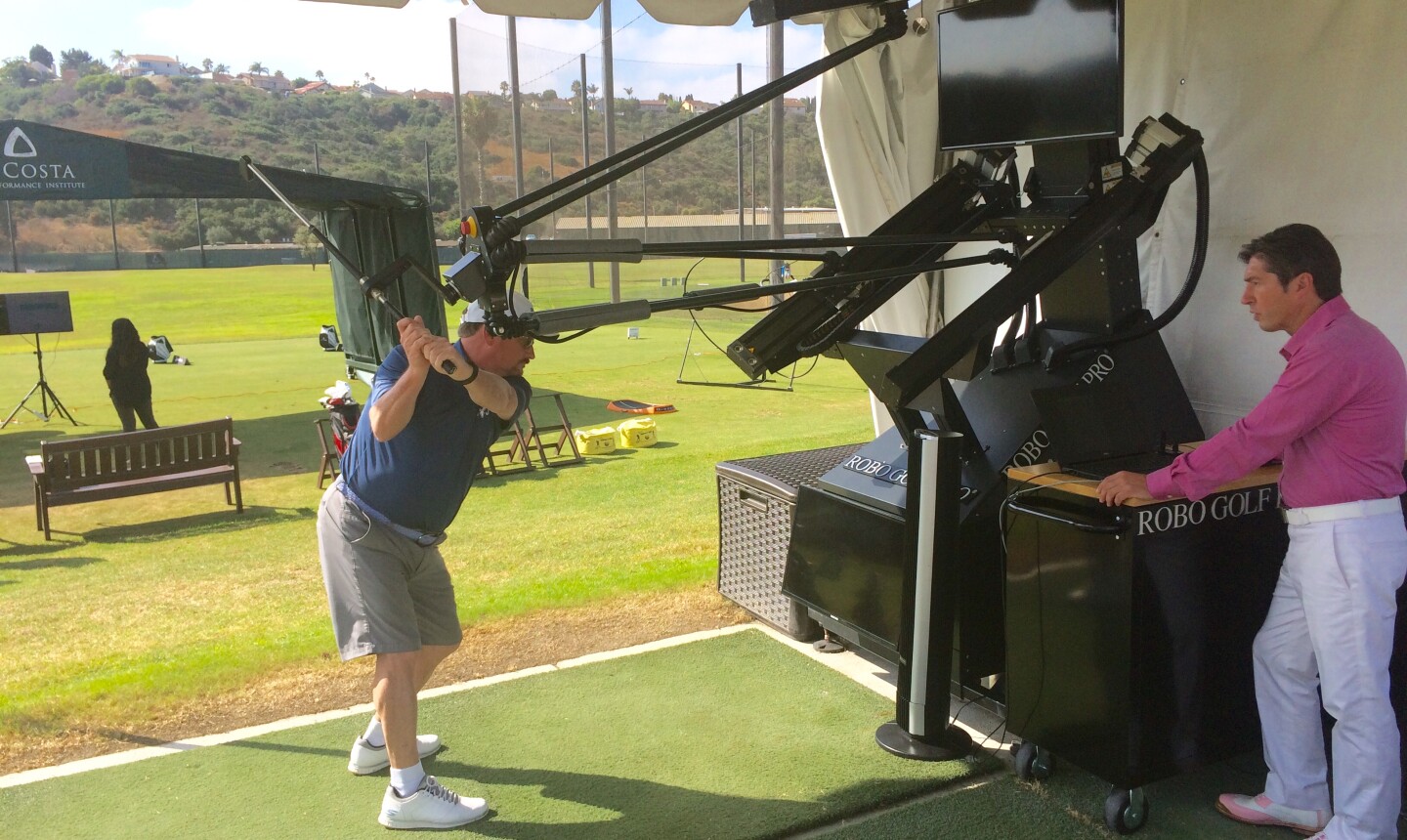 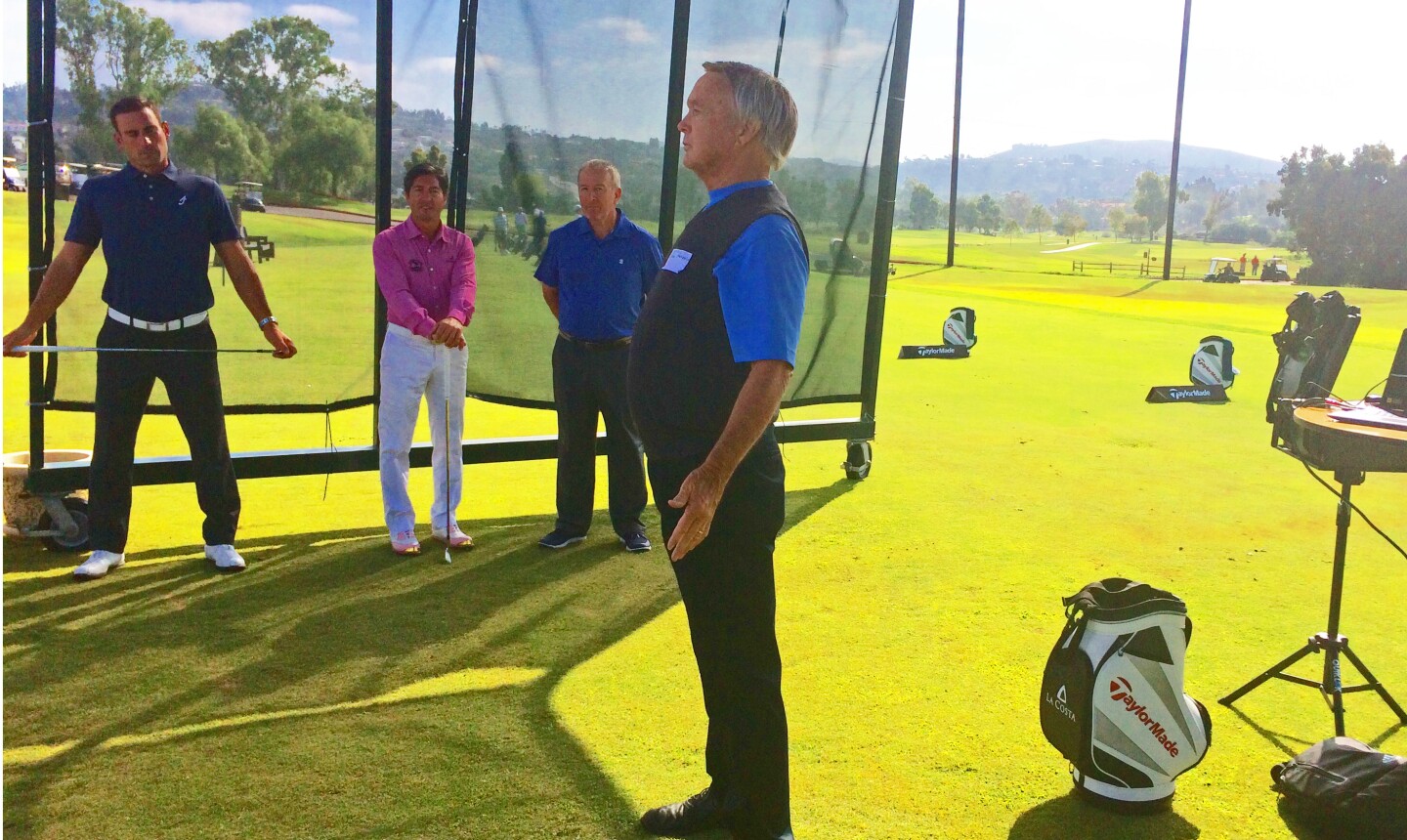 CARLSBAD, Calif. -- A recent trip to the Omni La Costa Resort & Spa wasn't just an opportunity to tune up my golf game, but transform it.

I got to meet Dr. Deepak Chopra, head of the famous Chopra Center at La Costa.(Read about Chopra's Beyond Performance Sports program here.) That was inspiring, but I spent the majority of my time there checking out the latest in golf instruction, technology and technique. From RoboGolfPro to the teachings of flexibility and swing expert Roger Federicks, they had me covered.

Wishing for a robotic swing

You know how critics say that nowadays all the tour players look like robots out there on the course? I'm still trying to figure out why that would be a bad thing. I'd like to have a robotic swing, one that repeats time and time again producing the same boring resultss. You still have to play the game, but if you'd like a repeatable golf swing that you can learn quickly, thenRoboGolfPro, which is now offered at the Omni La Costa Resort & Spa, could be the ticket.

Even better for me, Scot W.R. Nei, who is CEO and President of RoboGolfPro and TourBound Academy in Chicago, was on hand to put us through our paces. Nei -- who is also a guest instructor at La Costa as well as the Pebble Beach Golf Academy where the first RoboGolfPro was installed -- gave me multiple sessions over two days and transformed my ball flight and swing. Before, I was certainly a trapper, who played a draw (and sometimes hook), with a closed clubface. Now, I can even cut an iron on purpose with a more neutral swing thanks to the training I went through.

So here's how it works: After an initial video analysis, the $150,000 machine can be programmed to duplicate any kind of swing you want. You hold onto a club connected to the machine as it takes you through swings at different paces. After 20 or 30 swings, you start to build muscle memory. Golfers often go right from the RoboGolfPro to the range with a completely overhauled swing built entirely on feel.

In my case, Nei exaggerated a couple of things with the RoboGolfPro to help me feel more laid-off because I have always crossed the line at the top with a closed clubface. Now the clubface feels open (really, it's square) and I don't fear missing it left.

I also saw Nei work with another player who has never felt a golf swing that wasn't severely over the top. The immediate results were astounding. The golfer in question probably added 70 yards to his tee shots, and they weren't being sprayed wildly anymore. The whole process took about 30 minutes.

"It makes a hard game easy," said Nei, a Chicago-based PGA pro who invented RoboGolfPro when he was a player. "If an instructor ever tells you that you're going to get worse before you get better, you need to ask for your money back."

I don't know about easy, but it's certainly easier. And it certainly accelerates the learning process, especially when Nei combines the RoboGolfPro with the biomechanics tool K-Vest a wireless sensor system that produces a 3-D representation of the golfer's body positions in the swing. Often, Nei doesn't have to say a word when working with a student. You simply work with the machine then go to the range and eventually the course and repeat what you just felt.

Video: Vaughn Taylor rides RoboGolfPro to get back into win column

A couple of pro golfers as well as some wealthy amateurs have their own RoboGolfPro machines, including Vaughn Taylor, who used the machine for a year before resurrecting his playing career at the 2016 AT&T Pebble Beach, which he won. Taylor practices with it regularly now, and the machine is available at 35 teaching locations worldwide, including new ones in Green Bay, Wisc., and Cabo San Lucas, Mexico..

Fredericks' way is the right way

Another portion of this remarkable weekend included a session with Roger Fredericks, who not only teaches golf, but the proper way to stretch and build speed and flexibility in the golf swing.

"He's helped me with my body," said La Costa's director of instruction, A.J. Avoli, who teaches golf fitness as well. "Some of the things he can do are amazing."

If you've never heard of Fredericks, who is now 71, just know this: When Arnold Palmer was playing the then Senior PGA Tour, he had lost a lot of distance, particularly off the tee. At that time, Palmer literally needed help getting off the mat during his early workouts with Fredericks. After a few months, (also aided by modern golf equipment) Palmer was blasting drives close to 300 yards again. But that wasn't even the most important part.

"Even if I never hit another golf ball," Palmer said a few years ago, "I'll continue to do Roger's program the rest of my life."

Fredericks, author of "Roger Frederick's Secrets of Golf Instruction & Flexibility," has worked with dozens of tour players, but his own body might be his best testament. He can bend over and place his hands completely under his feet without bending his knees and a do a full split with ease. A former player, Fredericks underwent several surgeries in his early adult life and has overcome all of them to become one of the most fit and flexible people you'll ever encounter.

I was fortunate enough to do one half hour session with Fredericks. It showed where my strengths and weaknesses were, and by that I mean where I was most and least flexible. After one session, I already felt better about playing.

And like Palmer, it isn't just about your golf game; it's about all aspects of your life. In my case, I'm sure it will help my other sports passion, tennis, as well. (Speaking of tennis, I couldn't pass up an opportunity for a lesson at the wonderful facilities and Cliff Drysdale Tennis Academy at La Costa, which used to host a professional WTA event and most recently staged a professional team tennis event I was fortunate to get a lesson on the multi-leveled center court.)

But Frederick's program benefits your health in general. Many of us spend way too much time sitting in front of a computer, compressing our spine, losing flexibility daily. His often yoga-based exercise routines can do wonders to combat that and make your life more enjoyable in your prime and in your senior years.

Students can request one or all of these technologies and techniques at La Costa's Golf Performance Institute. A one-hour session on the RoboGolfPro with director of instruction A.J. Avoli is $250; a two-hour session with Avoli with the K-Vest 3-D analysis is $350; and two and half hours with Roger Fredericks, who will conduct a swing analysis as well as a custom stretching program is $395. Golfers can also create their own full-day or multi-day packages using any or all of these techniques and technology by contacting the La Costa Golf Performance Institute.