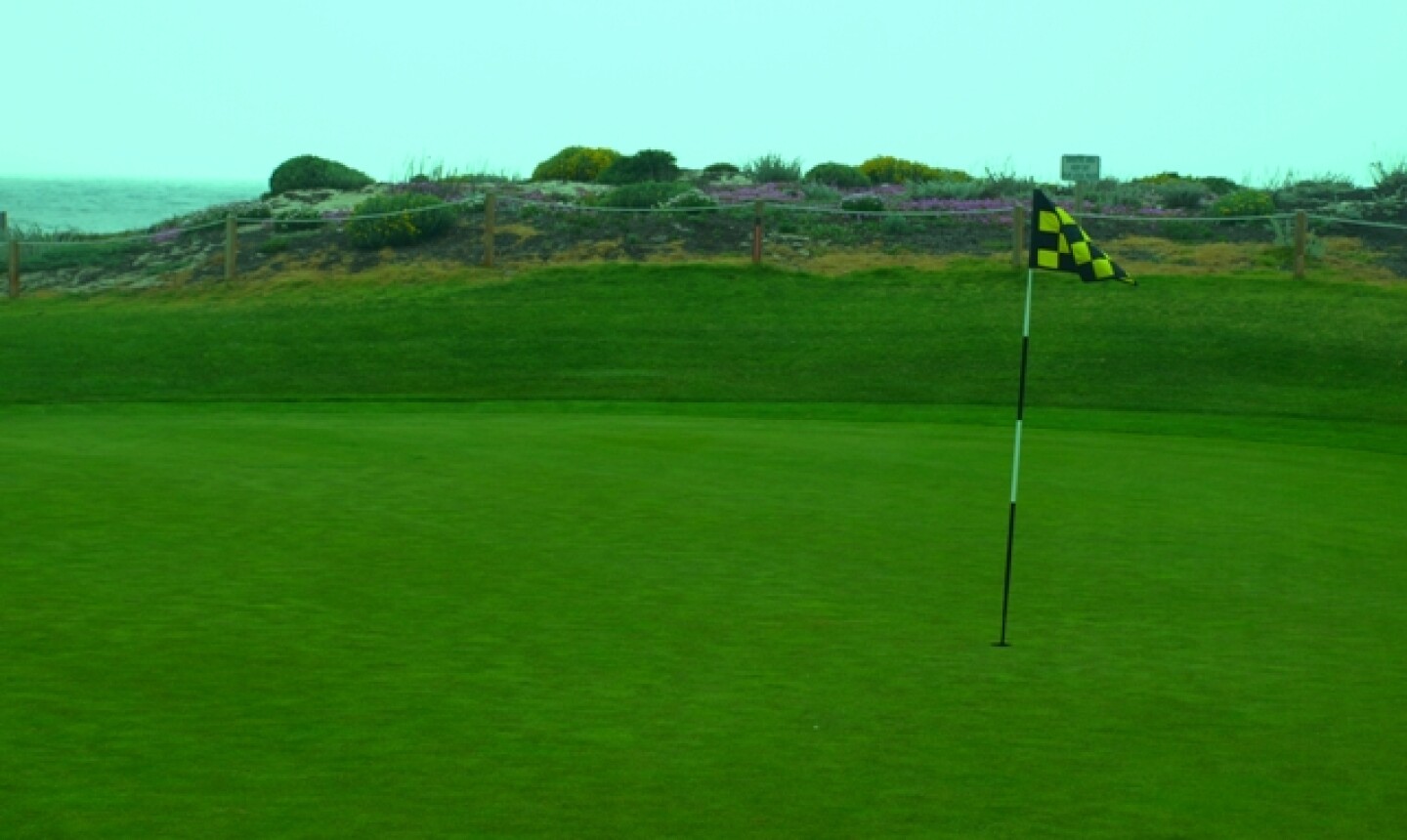 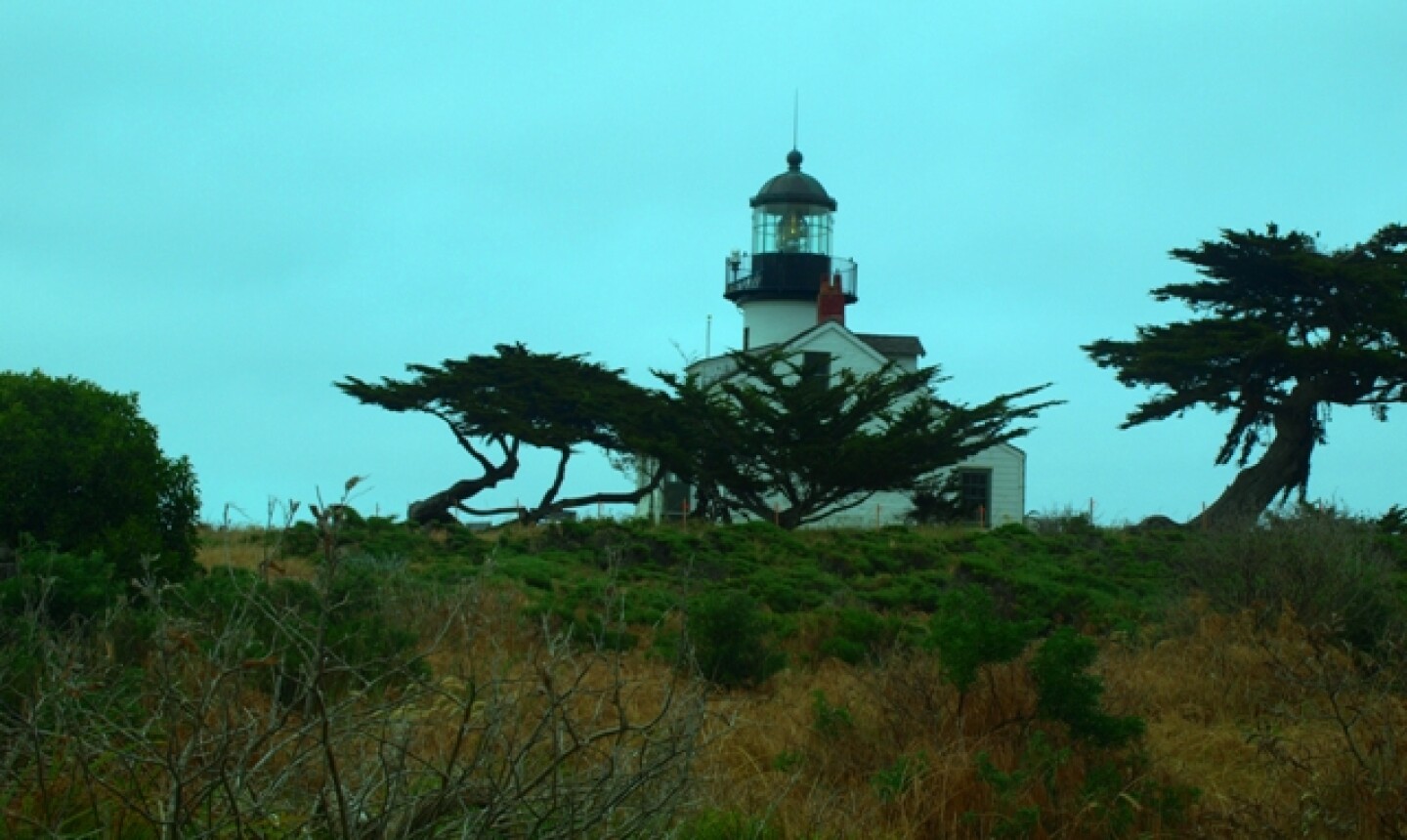 The famous Point Pinos Lighthouse can be seen from every hole on the back nine at Pacific Grove Golf Links. Mike Bailey/Golf Advisor 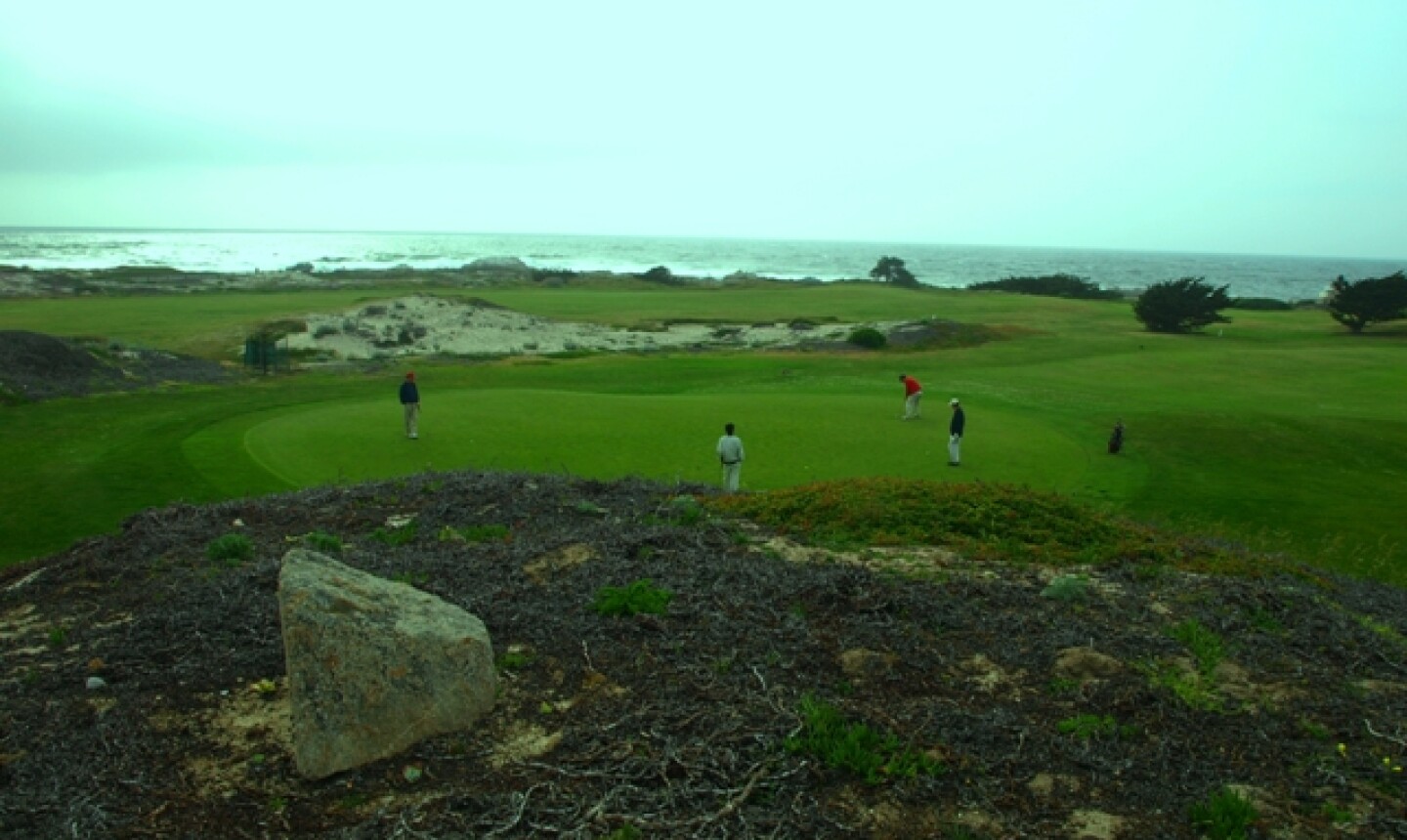 As this group on the 13th green demonstrates, Pacific Grove Golf Links is a great walking course. Mike Bailey/Golf Advisor 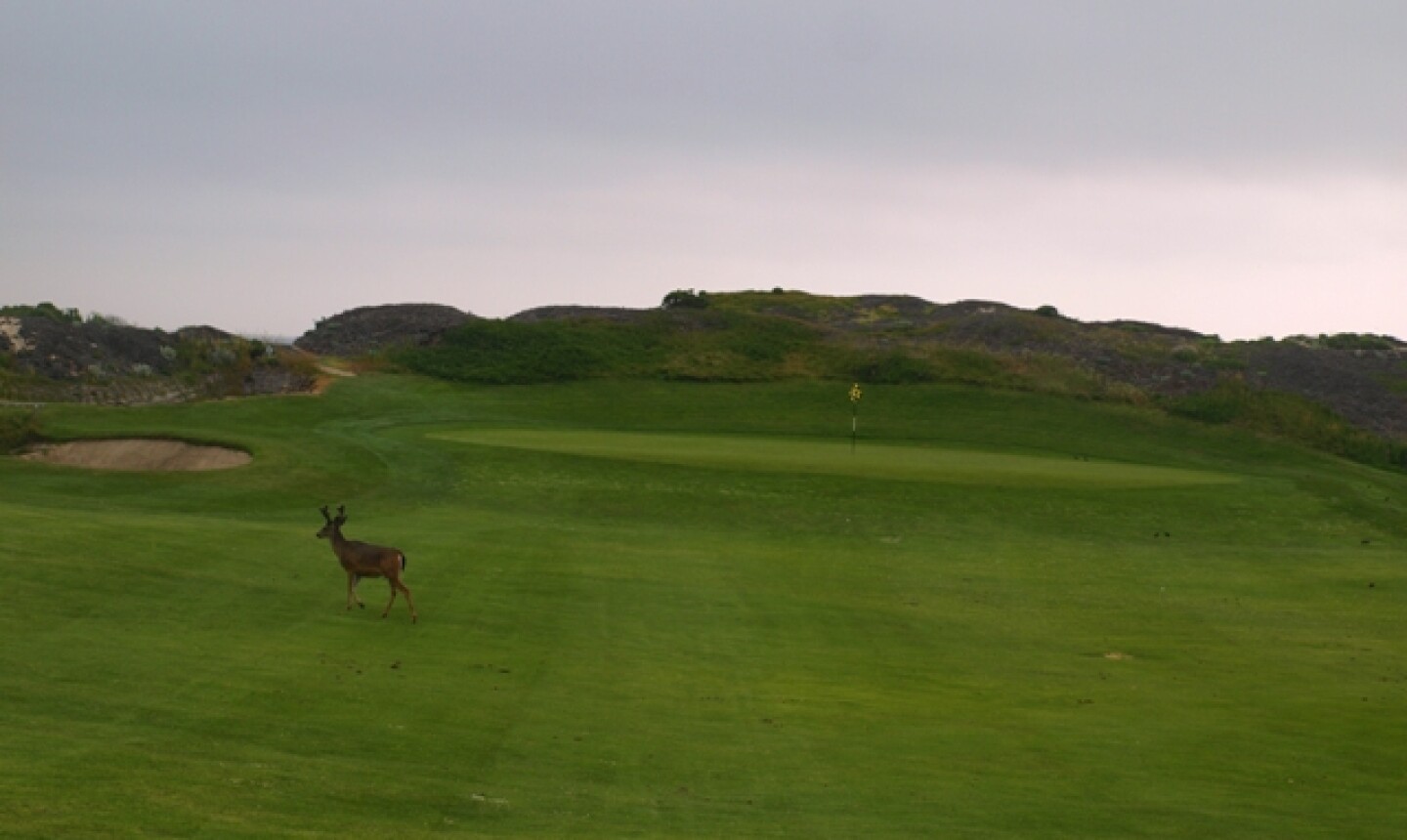 PACIFIC GROVE, Calif. -- Around these parts, it's simply known as PG, an economy golf course that often draws comparisons to Pebble Beach Golf Links on the other side of the Monterey Peninsula. Overlooking Point Pinos and the Pacific Ocean, it's almost unfathomable that you can play Pacific Grove Golf Links (aka PG) for around $40 or less.

But there it is, a somewhat unassuming golf course that opens with two warm-up par 3s and ends with a flourish. It's eminently walkable and memorable. This humble municipal might be the best deal in golf.

Pacific Grove Golf Links is a tale of two nines. While the back nine ocean links certainly gets all the press, the more mundane front nine isn't without merit.

It was designed by H. Chandler Egan, a former captain on his Harvard golf team and NCAA champion. In 1904, he not only helped his college team to its third NCAA title, but he also won medals at the Olympics (the last time golf was an Olympic sport) and the first of two U.S. Amateur titles.

Egan's excellent playing career continued as he moved west to Oregon, and he soon began a career in golf course architecture. Egan partnered with Alister MacKenzie to renovate Pebble Beach prior to the 1929 U.S. Amateur, and in 1932, he designed the nine-hole Pacific Grove course.

Egan's original design opened with a par 5 but had to be rerouted when a new clubhouse was built in 1990. Instead, it now opens with the aforementioned par 3s, then two short par 4s that are best played conservatively since out-of-bounds looms for drives that are hit through the fairways. This parkland nine features plenty of tall pines and cypress trees, so it's anything but easy.

The back nine came along in 1960, and it, too, has a strong Pebble Beach connection. Back nine architect Jack Neville collaborated with Douglas Grant on Pebble Beach Golf Links. Ironically, Neville and Egan were rivals during their playing careers and also friends.

At Pacific Grove Golf Links, Neville got the property that backs up to the sea, and he was able to put together a links layout among the dunes reminiscent of the Scottish golf courses on the other side of the Atlantic.

This is the side that gets all the press. On a clear day, it doesn't get much better than the views of the Neville nine at Pacific Grove. Starting with the 11th green, you'll spend the next couple of hours listening to the surf as you negotiate the wind and try to avoid the pitfalls of a traditional links course.

It's here that you catch views of the Point Pinos Lighthouse from every hole, and the names of the holes themselves -- Seaward, Rocky Shore, Whaler's Watch, Lighthouse and Last Chance -- evoke the early spirit of the game. Again, like the front nine, greed can be the death of a good round. Patience is generally rewarded.

First off, Pacific Grove isn't easy. Just because this par 70 is less than 6,000 yards doesn't make it a pushover.

In fact, it almost makes it more difficult because if you try to drive some of the short par 4s, especially on the front side, you can find yourself re-teeing and make double bogey or worse in a hurry.

Pacific Grove Golf Links isn't overly difficult, however, if you play with a little course management. And while the front nine is somewhat pedestrian, it serves as a nice warm-up until you get to the highly anticipated Neville nine.

After the par-3 10th, Pacific Grove, of course, is a different golf course. It takes on a seaside links feel, and you must play it that way. First-timers will have a tough time understanding where some of the holes go, like the par-5 12th with out-of-bounds on the right that isn't evident off the tee. It's advisable to play the 12th conservatively, perhaps an iron or hybrid off the tee to avoid going through the fairway on this dogleg right or finding the white stakes.

Pacific Grove Golf Links is also in an ongoing renovation that includes a dunes restoration plan to protect biological habitat and plant species. Bunkers are also being renovated.

For around $40 or so ($20 twilight) you're unlikely to find a better deal anywhere in the country, especially anything on the ocean. It's a golf course you should play at least once on any trip to the Monterey Peninsula.

The clubhouse has some 3,000 square feet of space and includes a nicely stocked golf shop as well as the Point Pinos Grill, which offers a nice menu of bar food and entrees as well as brews and drinks. The clubhouse also has a large outdoor patio for groups or tournaments. 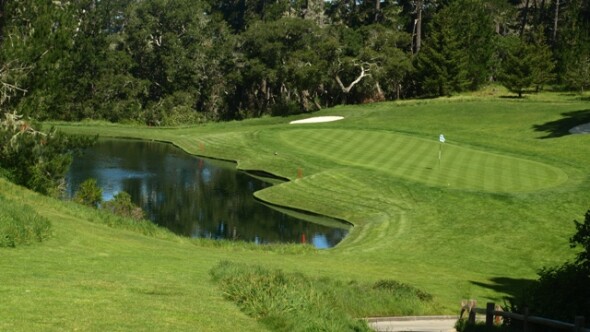 Articles
Spyglass Hill Golf Course in Pebble Beach: Looking beyond the epic first five holes
Perhaps if not for its big sister in Pebble Beach, Spyglass Hill Golf Course would receive consideration for a major championship. It's that good, especially the opening stretch of five holes, which ranks, arguably, as the best in golf. Don't sell short this historic gem, though, Mikes Bailey writes. It offers beauty and challenges beyond the great views of the Pacific Ocean.
4 Min Read