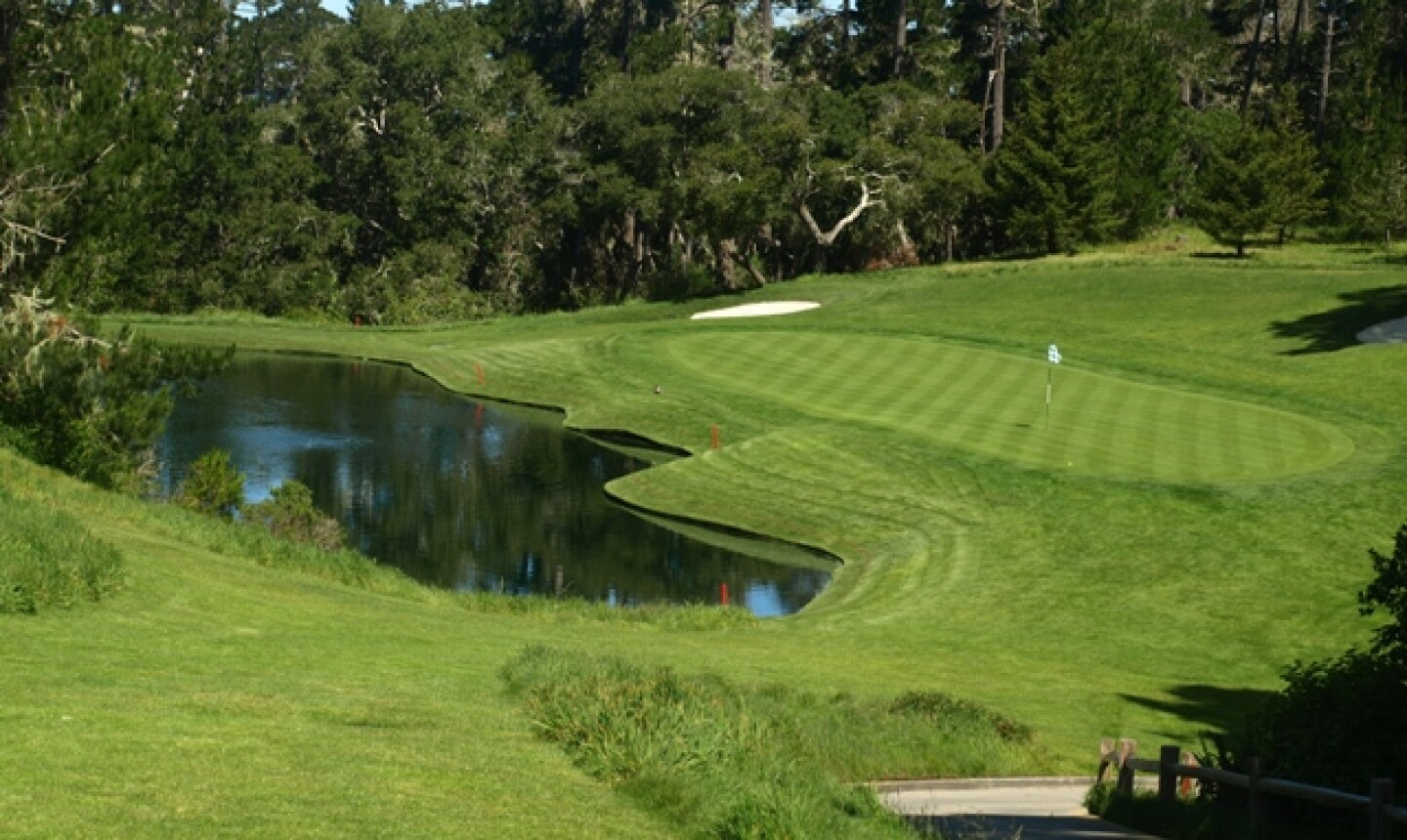 Holes like the par-3 12th at Spyglass Hill Golf Course don't include ocean views, but they're good in their own right. Mike Bailey/Golf Advisor 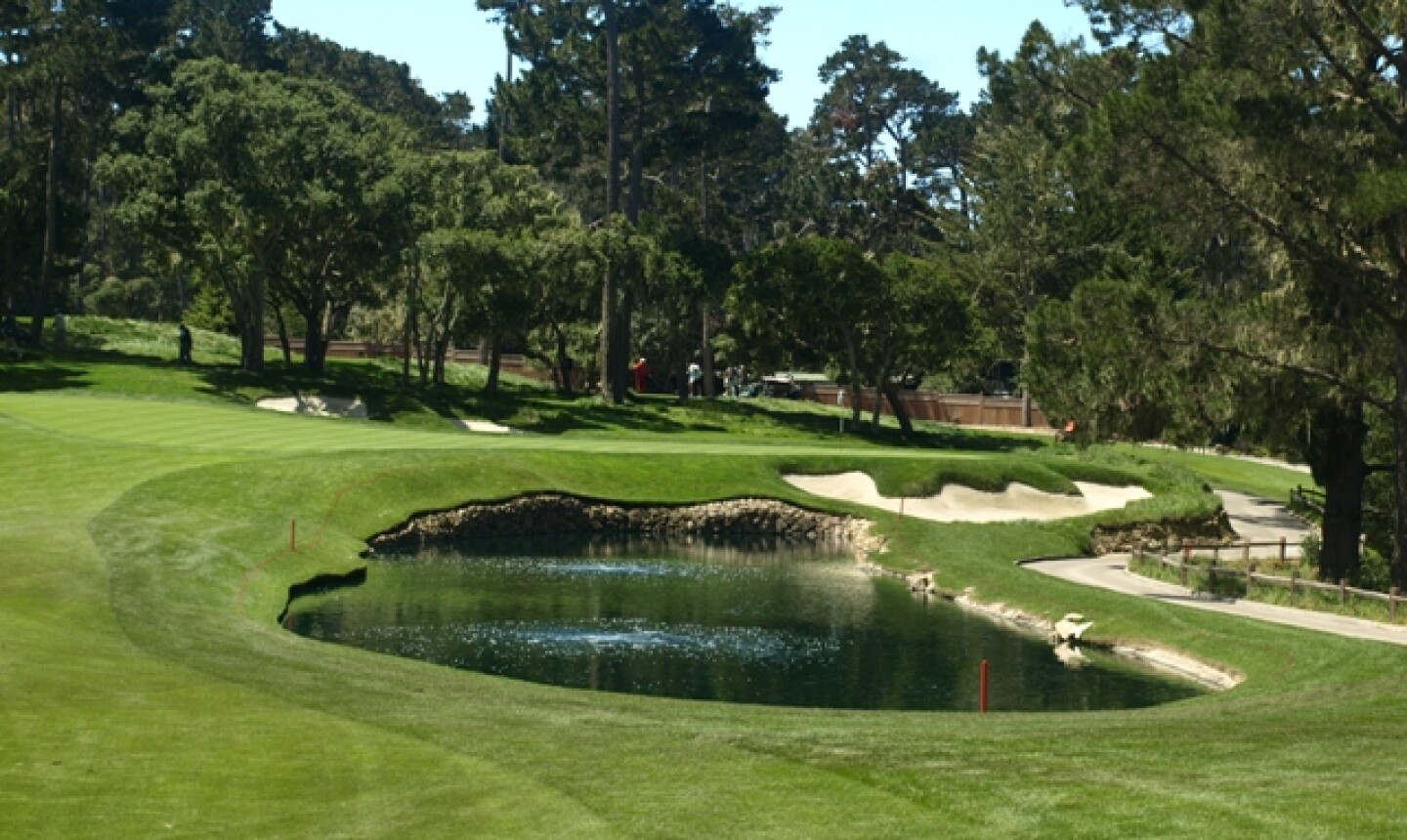 The 560-yard par-5 14th at Spyglass Hill Golf Course is not only difficult, but it's also pretty scenic, despite its inland location. Mike Bailey/Golf Advisor 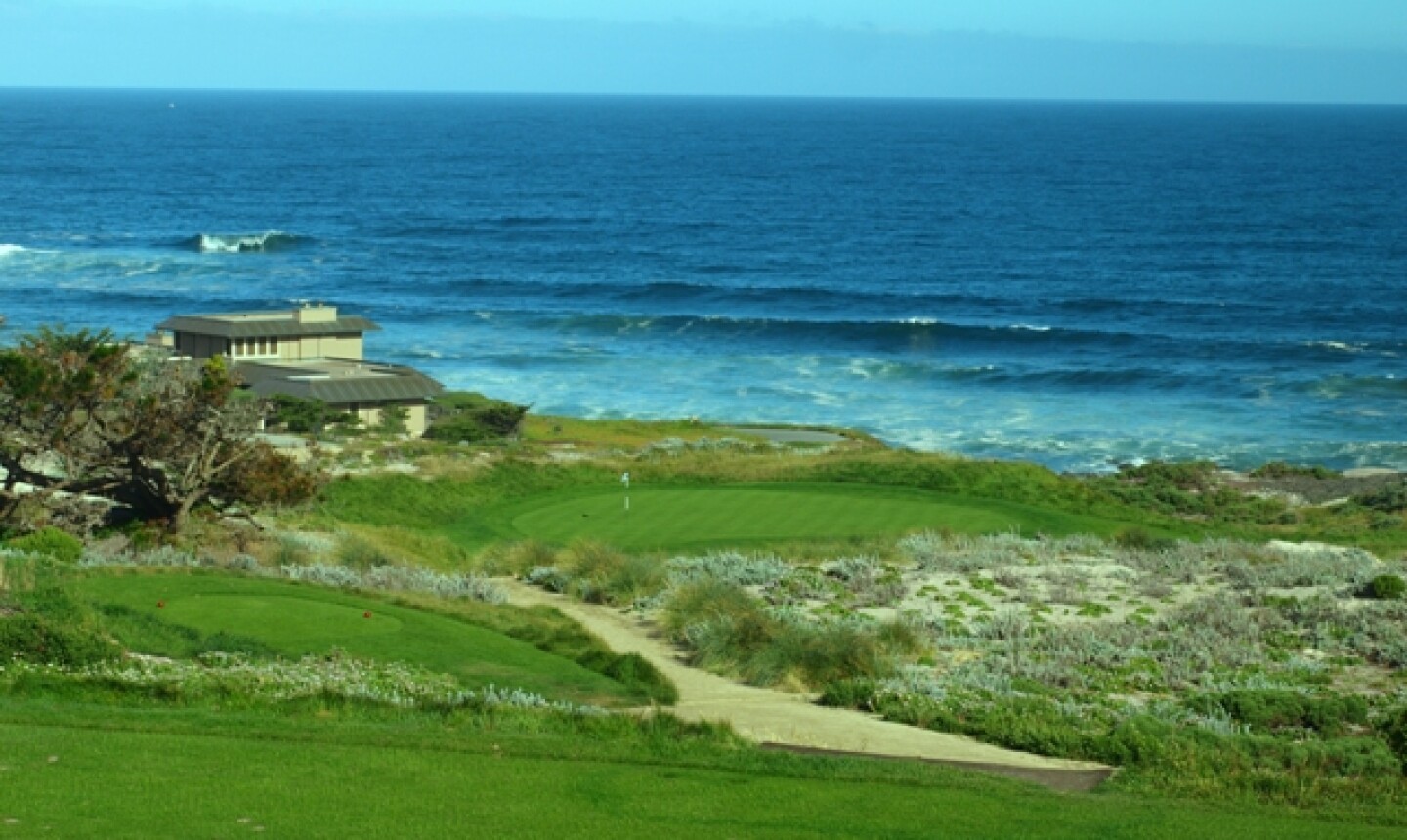 There's no denying that Spyglass Hill Golf Course's first five holes, including the par-3 third, rank among the most picturesque in golf. Mike Bailey/Golf Advisor 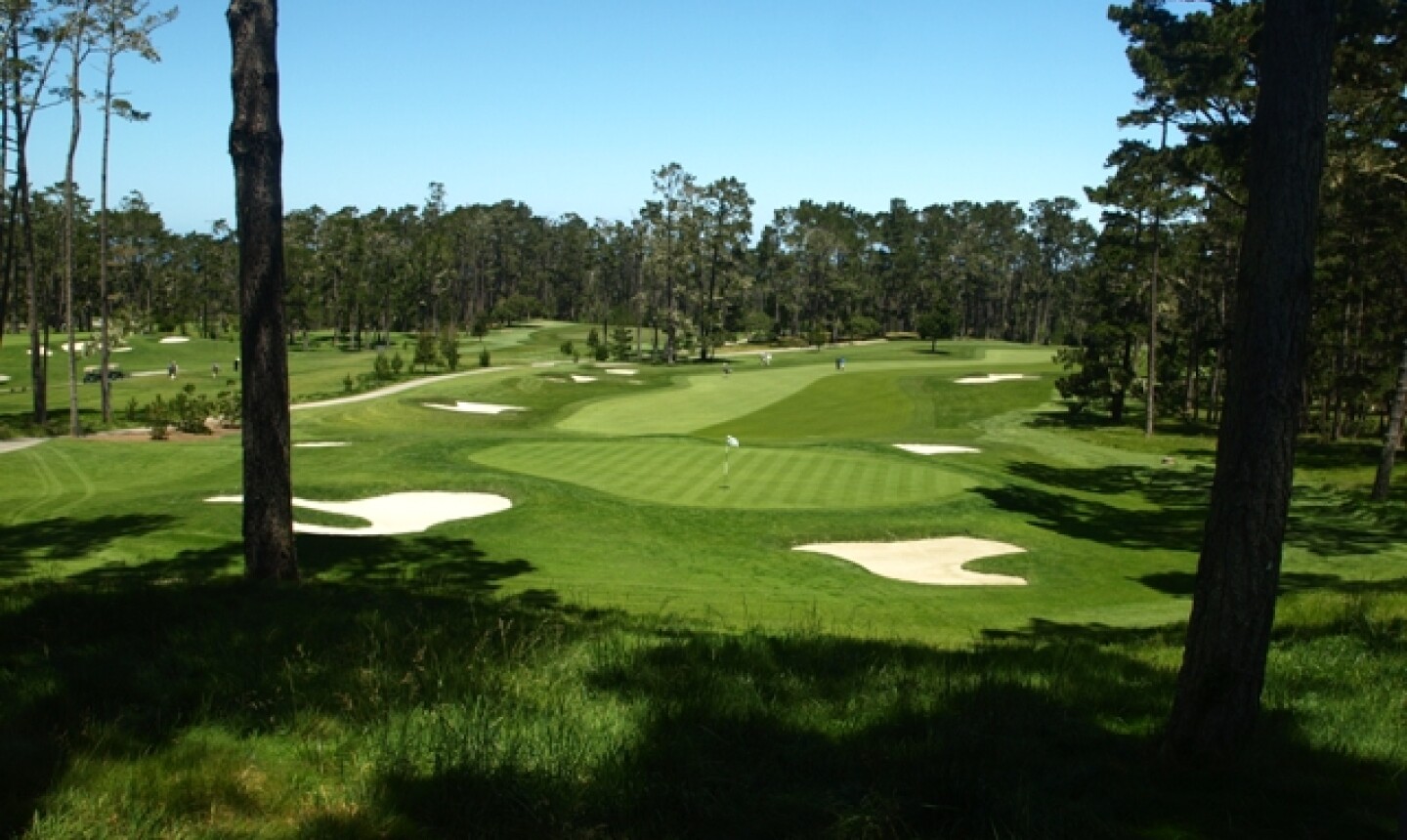 The short, par-4 17th at Spyglass Hill Golf Course offers one of the few birdie opportunities on the back nine. Mike Bailey/Golf Advisor 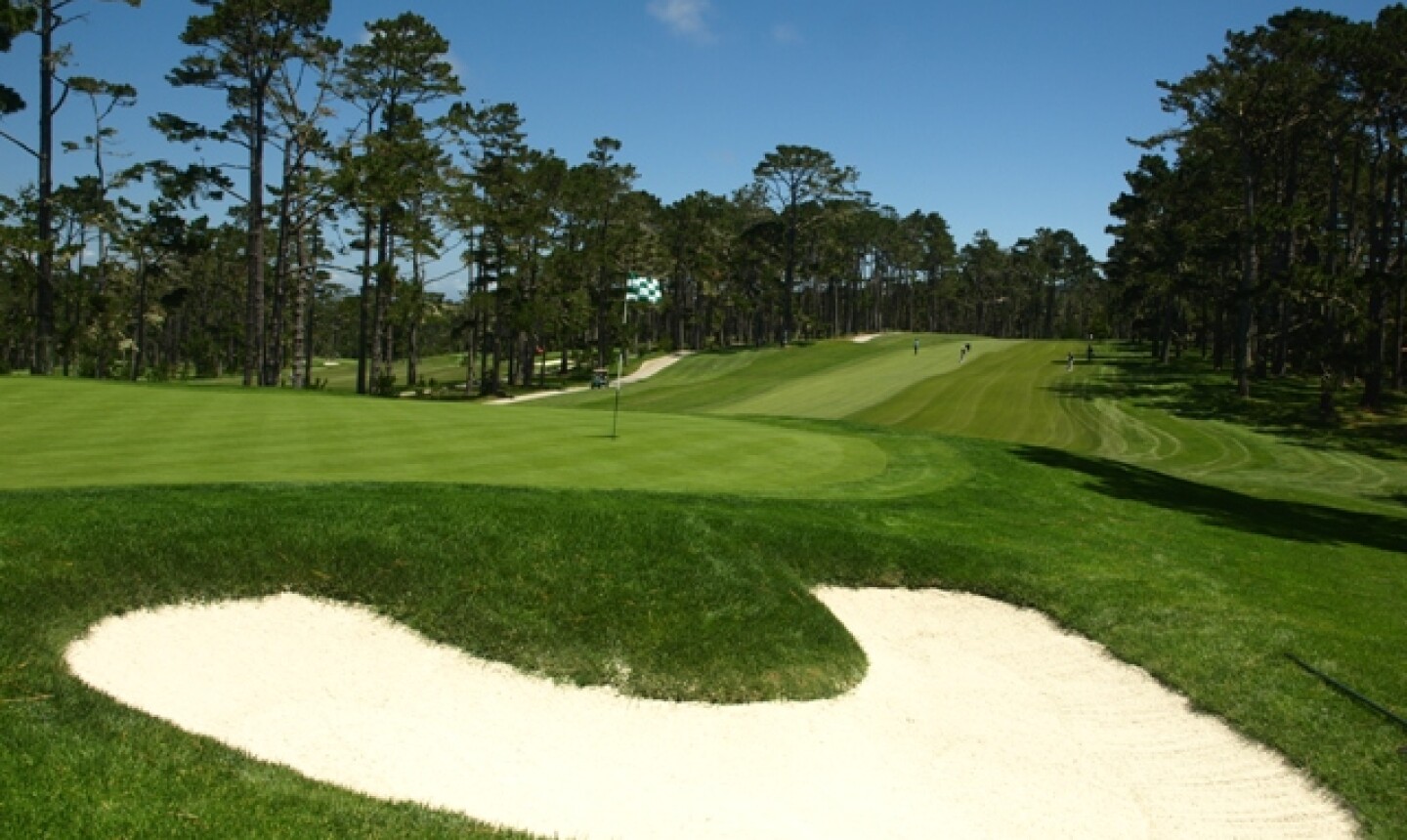 PEBBLE BEACH, Calif. -- There's almost no denying that the best starting five holes in golf await at Spyglass Hill Golf Course. The Pacific Ocean enters view on the opening hole, a dogleg-left par 5, and it doesn't leave for about an hour.

The second hole, an uphill par 4, features a green perched so high you'll see nothing but the flagstick on approach. The downhill third ranks as one of the best par 3s you'll ever play, with the ocean in the background as dunes and high grass guard the green. The dogleg-left, par-4 fourth, another postcard, includes an unusually shaped, multi-tier oblong green reminiscent of the great holes in Scotland. And the fifth is another challenging par 3, exposed to ocean breezes.

But what about the rest of the golf course? To hear some descriptions of this classic, 1966 Robert Trent Jones design, the splendor of Spyglass Hill ends after the fifth hole as the golf course turns inland through a forest of tall pines. Nothing could be further from the truth.

The history of Spyglass Hill

According to Neal Hotelling's book, "Pebble Beach: The Official Golf History," Spyglass Hill G.C. was built for a mere $650,000. Initially, it was to be named Pebble Pines, but that was vetoed by Samuel Finley Brown Morse.

Morse headed the Del Monte Properties Co., which developed Pebble Beach in the early 20th century. He had "a passion for local history and knew well the legend of Robert Louis Stevenson's inspiration for "Treasure Island" stemmed from his time on the Monterey Peninsula," Hotelling wrote.

Once they settled on Spyglass Hill, the holes received names for themes and characters in Stevenson's novel.

Indeed, the first hole of the Glass, as the golf course is also known, is named Treasure Island. Others include the Black Spot (No. 3), Captain Flint (No. 10) and Long John Silver (No. 14). More later on the 14th.

Immediately upon the opening of the golf course, Bing Crosby added it to the rotation for his annual PGA Tour pro-am. But not everything was rosy. Many viewed the golf course as too hard, so officials softened some of the greens.

But the biggest problem involved drainage. It seems the economical building of the facility, which included the on-site burning of timber cleared from the fairways, didn't exactly lend itself to good agronomics.

Drainage got so bad that in 1996, tour officials canceled the AT&T Pebble Beach Pro-Am. Something had to be done. And it was.

Later that year, Hotelling wrote, the drainage system underwent a $2 million revamp project, and improvements have continued since. According to one caddie who has worked the golf course for 20 years, the difference is "night and day." The turf, now healthy, allows the golf course to drain. But it's still a difficult test.

Spyglass Hill, one of the most difficult layouts in the country. measures almost 7,000 yards from the championship tees with a par of 72. The course rating is 75.5 with a slope rating of 147.

Perhaps if not for its big sister, Pebble Beach Golf Links, Spyglass Hill would receive consideration for a major championship. Pebble Beach will host its fifth U.S. Open in 2010.

Spyglass Hill Golf Course makes an impression almost immediately. By the time you hit your second shot on the par-5 opening hole, the blue bay waters emerge behind the green. When you get to the sixth hole, a long par 4 that plays uphill back into the Del Monte Forest, the ocean reaches your rearview mirror.

Now you've got doglegs and ponds and stimulating greens complexes that entirely change the complexion of the golf course. Critics claim that the final 12 or 13 holes alter the character. But like the book for which the holes are named, they are simply represent new chapters with interesting twists and turns.

The eighth, named Signal Hill, ranks as Spyglass' No. 1 handicap. It plays uphill to a narrow fairway with plenty of uneven lies and a difficult green. The ninth, also uphill, comes back to the clubhouse. And the 10th, a long, downhill par-4 through a chute of trees, requires a long, accurate tee shot, preferably right to left to prevent an overshoot of the fairway.

Then you hit the first of two great, little par 3s. The 12th, a downhill, 175-yarder, includes water on left side of the green and bunkers right. The 15th at only 120 yards, ends with a green that wraps around a picturesque pond on the right.

The golf course also features four unique par 5s, none better than the 14th. At 560 yards, the second half of this double-dogleg moves uphill. It's enough of a challenge just to hit two or three good shots. But add another pond near the front of an elevated green, and even a short third shot requires precision -- especially when the flagstick sits in the back right.

The golf course closes with three diverse par 4s, including the 18th, a 408-yard tester that plays longer than its yardage because of an uphill approach. In the end, the staff will even clean your shoes, capping the unforgettable golf experience that is Spyglass Hill.