Paris Landing State Park Golf Course in Buchanan, Tennessee: Hideaway in the 'Land Between the Lakes' 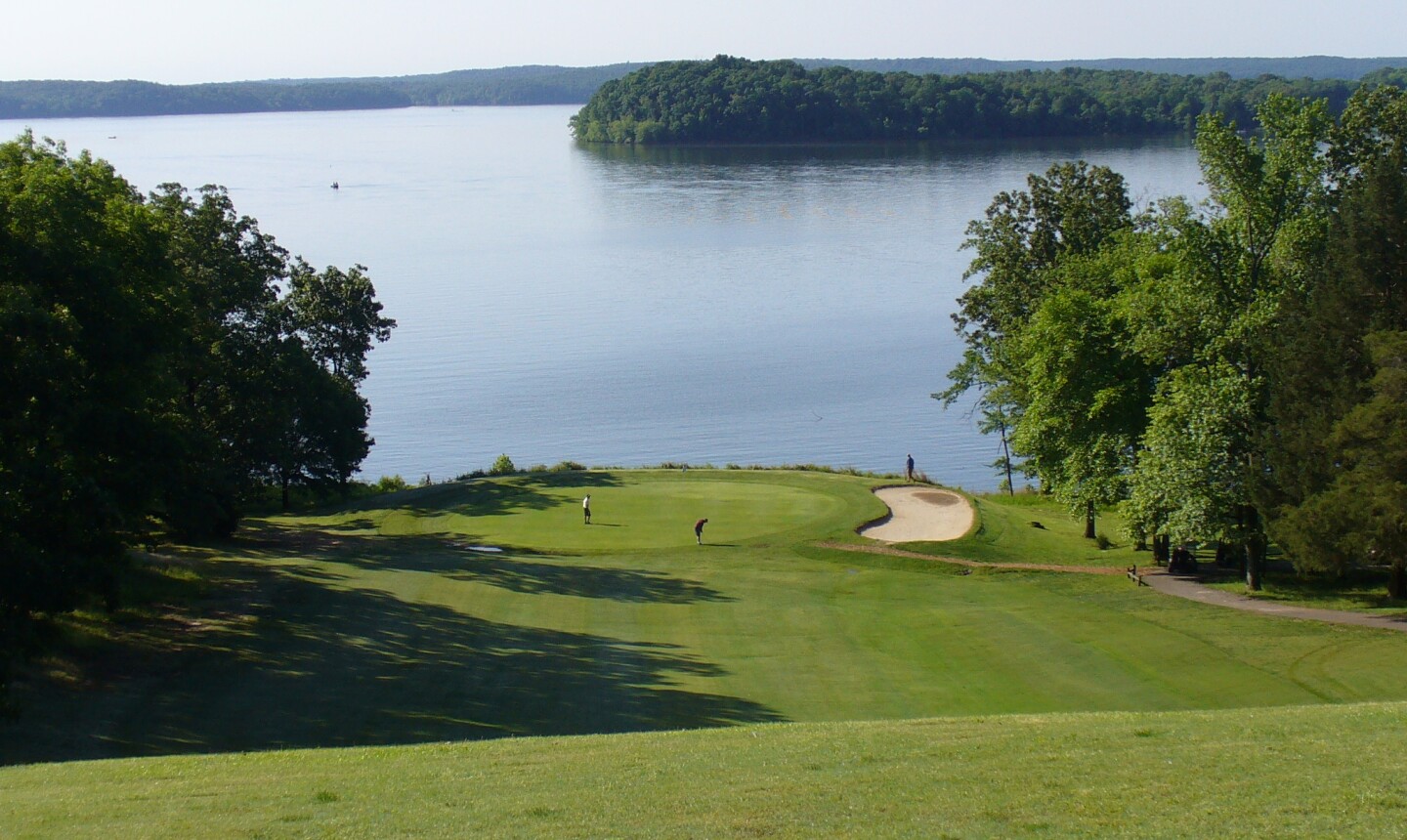 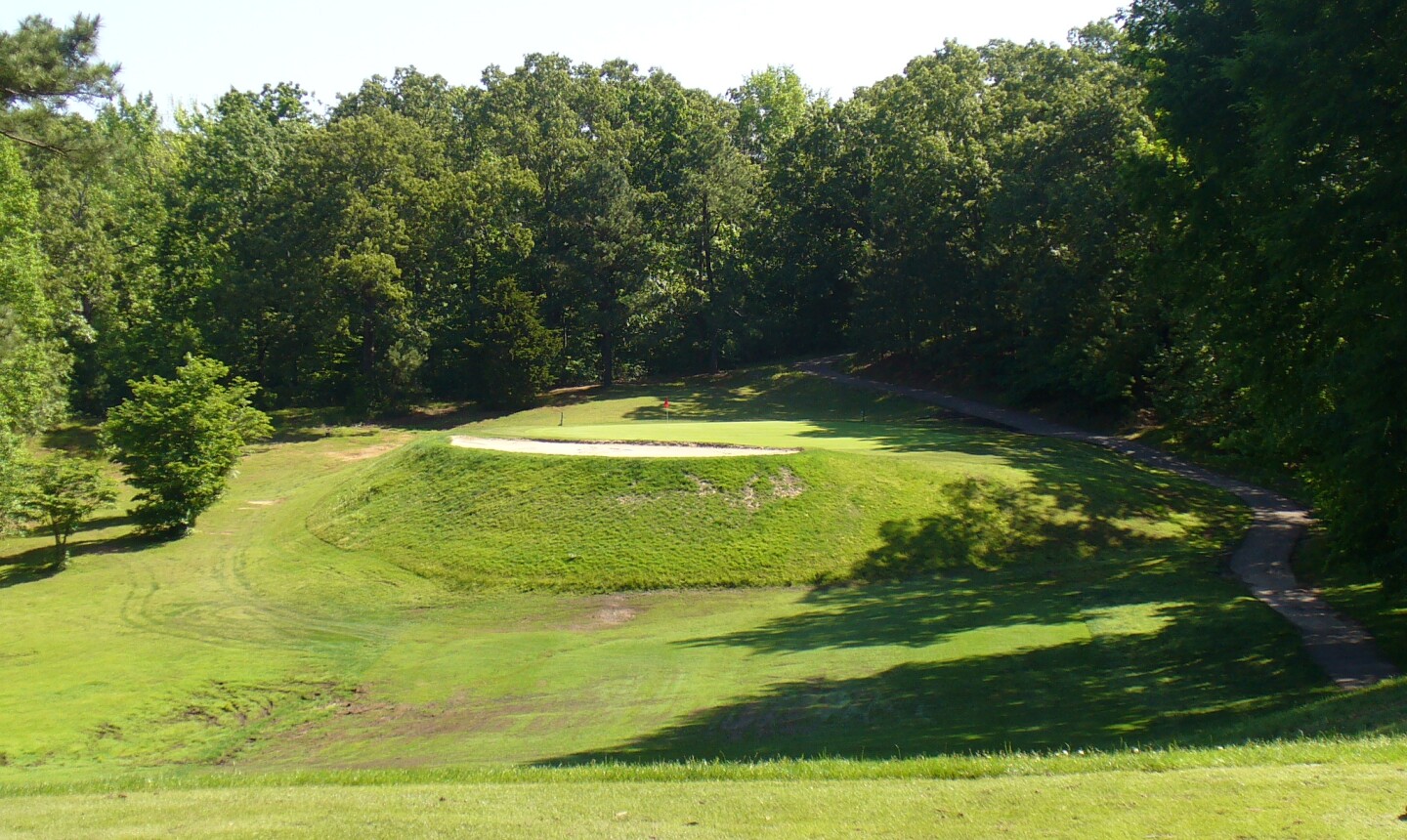 Golfers who end up on the steep sides of the eighth green at Paris Landing State Park Golf Course will have a nearly impossible stance. Kiel Christianson/Golf Advisor 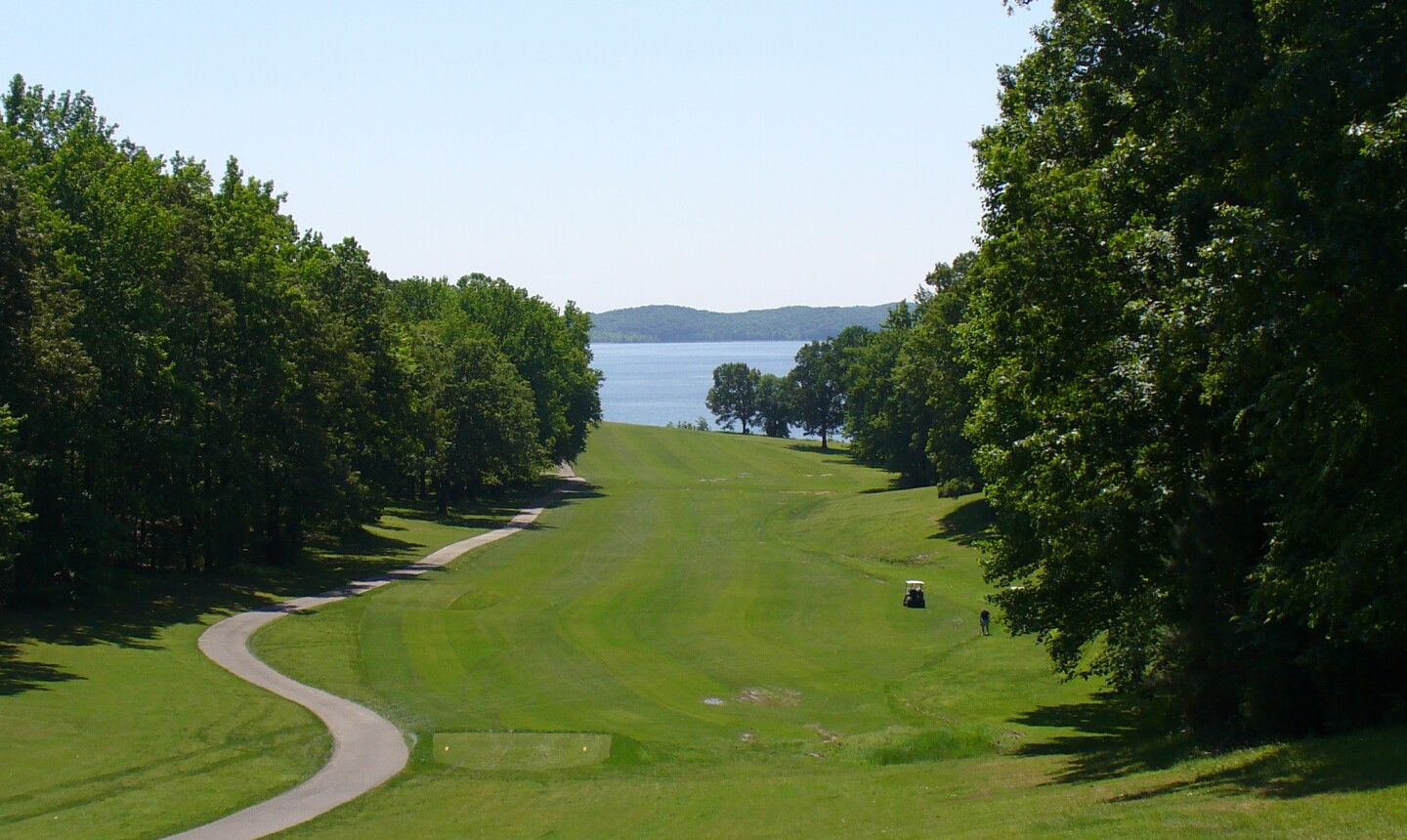 The tee shot on the par-5 12th hole at Paris Landing State Park Golf Course is arguably the best of the bunch. Kiel Christianson/Golf Advisor 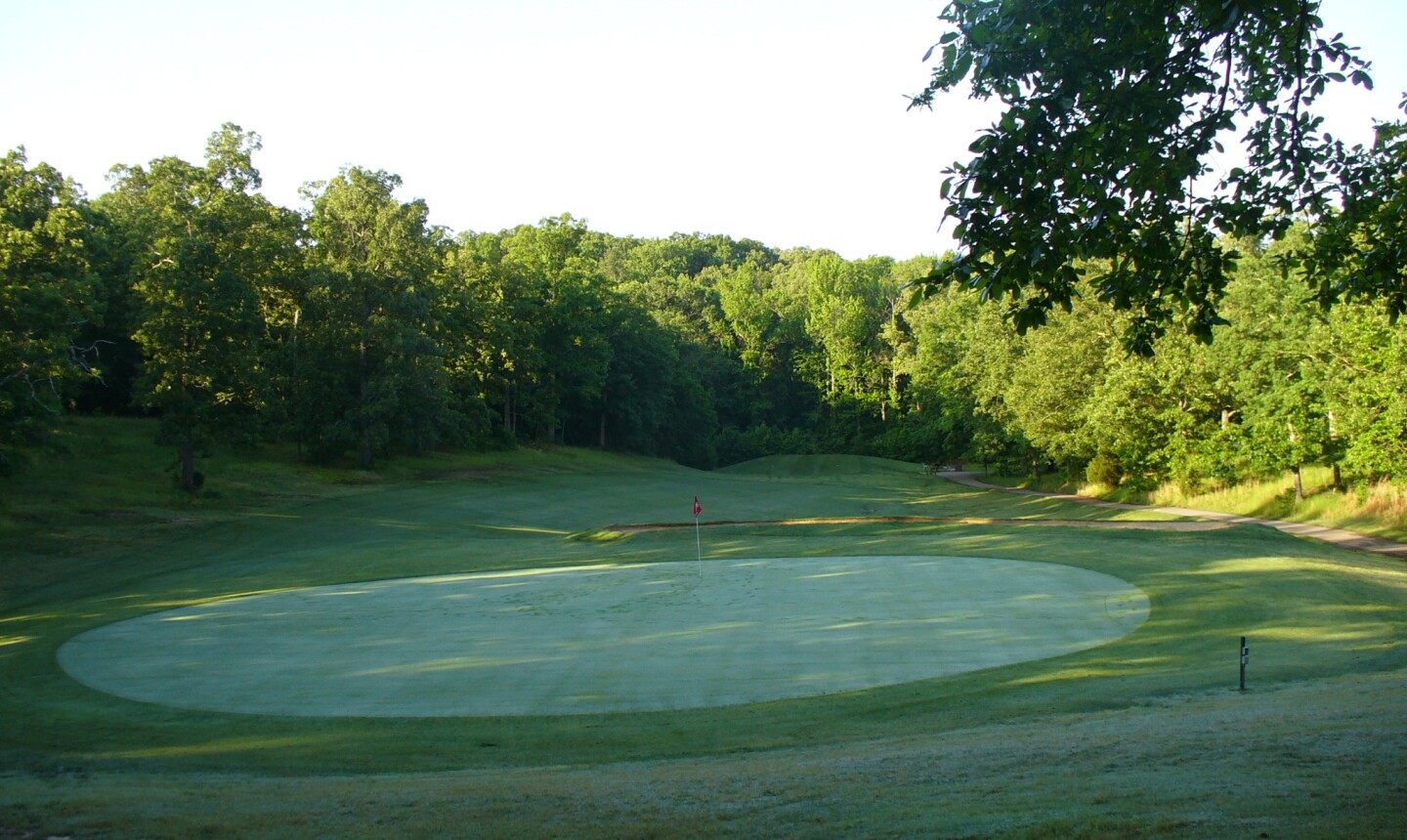 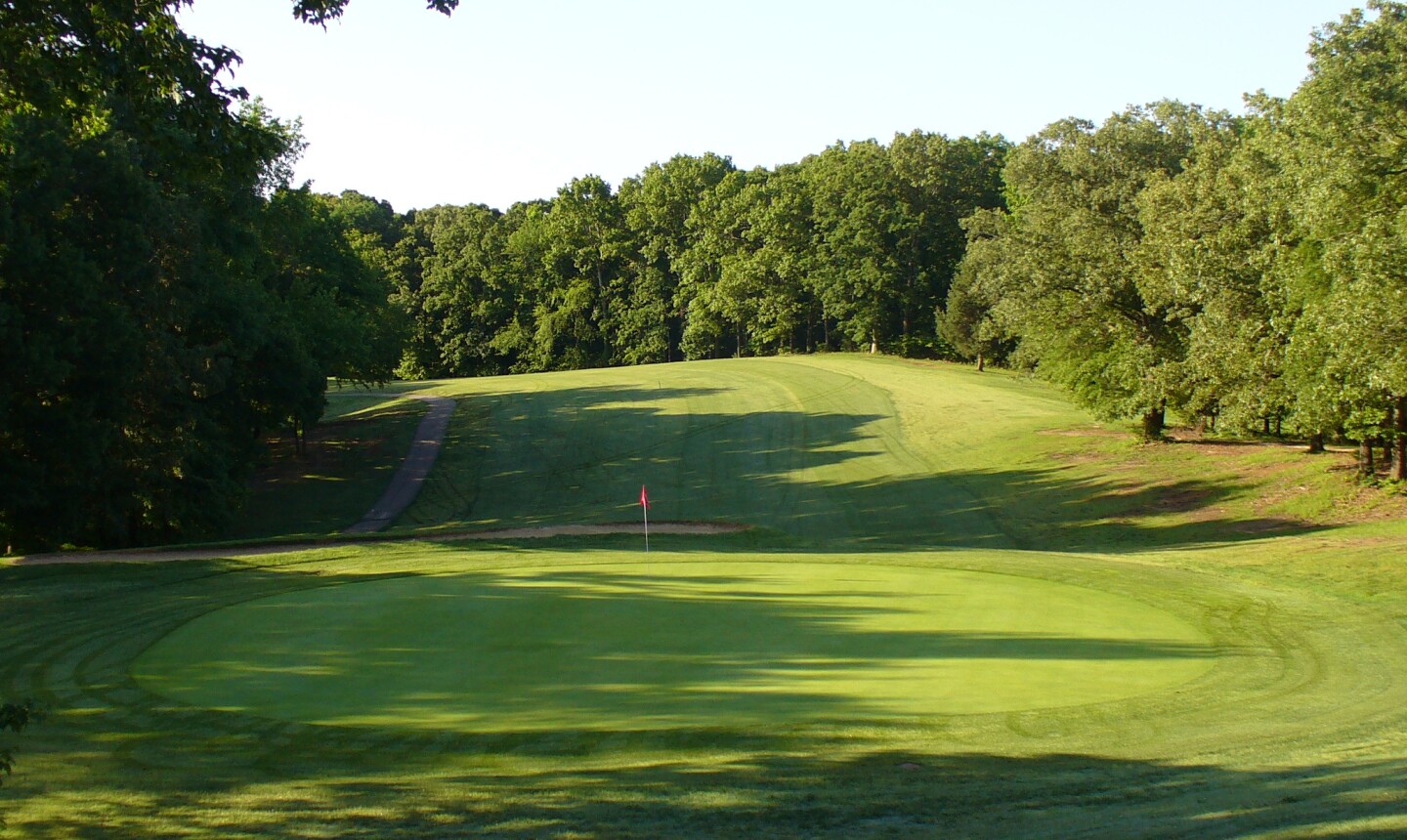 The 18th green at Paris Landing State Park Golf Course is one of the few you can see from the fairway. It's an excellent closing hole. Kiel Christianson/Golf Advisor

BUCHANAN, Tenn. -- The Tennessee Golf Trail consists of nine state park golf courses. Each are situated on scenic -- even dramatic -- landscapes, being located in state parks, as they are. But the location of Paris Landing State Park Golf Course, in the "Land Between the Lakes" area, is special.

The 6,643-yard track threads its way through towering trees along the western shore of Kentucky Lake. On several holes, serene vistas out over the lake calm you on the tees and greens, and bald eagles watch you from their nests on the telephone poles erected for them in the water.

Players enjoy one inspiring, challenging and usually elevated tee shot after another, and green complexes often defended by up-slopes to occluded putting surfaces. The tranquility and isolation of each hole, along with fine conditioning, provide outstanding value and understated difficulty for golfers of any skill level.

Paris Landing State Park Golf Course opened in the early 1970s. It was designed by the same consortium that laid out the courses at Montgomery Bell and Pickwick Landing.

All of these feature plenty of elevated tees and elevated greens, so that you drive down into a swale or valley and then climb back up toward the greens. Unlike Montgomery Bell, though, Paris Landing's tees are higher and allow for more carry, and its landing areas offer much more roll-out. (Many fairways at Montgomery Bell start their ascent right at the landing area, so shorter hitters hit straight into an upslope.)

Probably the most striking driving hole at Paris Landing is the 586-yard, par-5 12th. From the heights of its teeing area, players need to drive their balls long and straight through a corridor of tall timber. On the second shot, the fairway looks like it opens up straight into Kentucky Lake, as the green is perched on the side of a small hill to the left, overlooking the lake. On the next hole, take a look to the left through the trees, and you'll probably see some bald eagles nesting atop their poles just off shore.

Paris Landing's collection of par 4s and 5s is strong, with no hole that feels like any other on the course -- each one has its own identity. There is a ton of up and down and side-to-side movement in the fairways, making it a challenge to find a dead-flat lie anywhere.

The strongest par 4 is the 435-yard closer. This is one of the few holes with a teeing area lower than the landing area, as you play your drive up toward a wide fairway that cants and sweeps left to right. From there, you play slightly downhill across a swale to an elevated green. Come up short on your second, and you will end on yet another hallmark blind shot, scrambling for par.

Although all the longer holes are strong, the par 3s are probably the most memorable holes on the course. The 183-yard 17th is a devilish, uphill one-shotter that plays to a blind putting surface over a moat-like front bunker.

The 185-yard eighth plays slightly downhill, but it's all carry to a mesa-like green complex, fronted by a crescent-shaped bunker. Miss left or short, and you'll be pitching straight up a 15-foot sheer hillside. If you're really unlucky, your ball will stick on that hillside, and you'll be lucky to stay on your feet as you take your next swing. Take extra club here, as it feels a lot longer than the scorecard says.

The course's "wow!" moment is on the tee of the 186-yard fourth hole, however, where you find a 50-plus-foot drop down to a wide, relatively flat green set against the backdrop of Lake Kentucky. Notice how all three of these par 3s measure the same distance, but in each case, you'll be adding or subtracting yardage from the card. No. 4 plays about 30 yards shorter than the card says, for example.

Of all the Tennessee Golf Trail courses I've played (six of the nine, so far), Paris Landing is my favorite. The old-school defenses of elevated greens and strategic bunkering, along with uneven lies and tree-lined fairways kept it exciting and tough but still playable.

Conditioning was good, especially for a state park course, and promises to get even better: On June 20, 2016, the course will shut down as they re-sod all the greens, switching over from bentgrass to Champion Dwarf Bermuda, which will weather hot, humid temperatures better. (The course will re-open for play in September 2016.)

Paris Landing is a certified Audubon Society Sanctuary (just ask the eagles), but despite the forest in which it is set, all but the most errant shots have the possibility of being found. Course knowledge is not critically required -- which is nice for what is essentially a resort course catering to visitors to the park. Everything is in front of you and visible off the tee, but it is often difficult to know where the green exactly sits or where the flagstick is, given the elevated putting surfaces. Miss these greens, and most of the time you'll be happy to get up and down for bogey.

Paris Landing State Park Golf Course is a great stop on a family trip, or as a diversion from a fishing trip on Lake Kentucky. The cabins are quite lovely, with decks overlooking the lake, as well as high ceilings, fireplaces and modern bathrooms. Given the amenities of the park system and the reasonable green fees, once you've landed in Paris Landing, you might not want to take off again for quite some time.

Courses on the Tennessee Golf Trail:

Cumberland Mountain, Harrison Bay and Tims Ford are designated as "Bear Trace" courses, as they were all designed by Jack Nicklaus. The remaining five tracks are designated as "classics," having been wrought from the countryside largely in the early 1970s and later renovated to various extents.