So you're flying out of town on business or pleasure and want to get in a quick round when you land or right before you depart.

In some markets there isn't much close or convenient to the airport. But at several of the country's busiest airports, there is quality golf close by.

Here then is a look at golf around seven of the nation's 12 busiest hubs -- and a couple of bonus courses as well at some medium-sized airports:

The country's second-busiest airport is near two golf courses for anyone looking to play a quick round right off the plane or before departure. White Pines Golf Club is a 36-hole championship venue that's been around since 1928. Technically located in Bensenville, the club is actually only a couple of miles from O'Hare's runways, but it's more like a nine-mile drive from the terminals. White Pines' East Course and West Course are laid out over 240 acres in a very pleasant setting that's challenging for all players. And instead of the 19th hole, there's the 37th Bar & Grill, which is part of a new restaurant renovation at the club. This local favorite offers casual dining both inside and out on the patio.

Golf near Dallas/Fort Worth International Airport

The nation's fourth-busiest airport probably has more golf options close by than any other major airport in the country. None are closer, however, than Bear Creek Golf Club, a 36-hole complex literally right next to the airport grounds. Designed by Ted Robinson, both Bear Creek's West Course and East Course offer plenty of challenge, interesting layouts (with no homes and plenty of oaks, waterfall, lakes and ponds) and generally good conditions, especially after the facility converted its difficult-to-maintain bentgrass greens to Bermuda a few years ago. Not quite as close, but less than 15 minutes away, are two more great options in Grapevine -- the pricier Cowboys Golf Club and Grapevine Golf Course. Cowboys Golf Club is a premium daily-fee course inspired by the Dallas Cowboys' history, logos and memorabilia. Grapevine's muni is bargain-priced and a terrific 27-hole daily-fee course with 18 holes designed by Byron Nelson.

Of the airports listed, the courses near Denver International Airport are probably the biggest stretch with a couple of them just outside of 10 miles. Still, they're worth mentioning. Green Valley Ranch Golf Club is an easy drive, about 12 miles south of the fifth-busiest airport in the U.S. This relatively new course is economical (around $60 or less) and has good practice facilities and an excellent teaching program if you want a quick lesson. Another course about the same distance away is Buffalo Run Golf Course, a links-style course with plenty of big fairways.

If you're looking for a premium daily-fee experience on the way to the airport, there might not be a better choice than Bali Hai Golf Club, located on the Las Vegas Strip right next to Mandalay Bay and no more than 10 or 15 minutes from Las Vegas' McCarran International Airport, the nation's eighth-busiest airport. Bali Hai is a cool, tropical-themed golf course that is always in immaculate condition. It can be pricey (about $200 rack rate), but you can find specials online. If you're just looking for a quick tune-up or to get in some practice, however, check out the Callaway Golf Center. There you can hit balls, work on your short game, buy equipment or play the excellent par-3 course.

Phoenix's Sky Harbor International Airport, the 10th-busiest airport in the U.S., has a couple of good choices just minutes away. The ASU Karsten Golf Course is in Tempe, just like the airport, and offers an economical golf experience, especially in the summer when green fees are at bargain-basement prices. Designed by Pete and Perry Dye, there are Dye's signature bunkers everywhere and even an island green (sound familiar?). Another good option is Papago Golf Course, a recently renovated municipal layout just minutes away from the airport. The signature red rock formations alone are worth checking out at this reasonably priced parkland layout, especially if you've had your fill of desert golf.

The country's 11th-busiest airport, George Bush Intercontinental Airport actually has several options that are fairly close. If you leave the airport from the north side to FM 1960, the 36-hole Cypresswood Golf Club is actually right across the street from the runways. The popular daily-fee course offers one solid option -- the Cypress Course, which has played host to numerous Houston Open qualifiers over the years –- and the newer Tradition Course, an even better championship test that serves as a perennial site of state amateur events, as well as PGA Tour qualifiers. Both of these tree-lined courses can be played for well less than $100, especially the Cypress Course. Also nearby in Humble is the site of the Shell Houston Open, the Golf Club of Houston's Tournament Course, which has rack rates around $175. The Golf Club of Houston is one of the best-conditioned courses in the nation during late fall, winter and spring. Lastly, if on approach you start having visions of "Church Pew" bunkers and stone bridges of Amen Corner, that's no mirage, it's Tour 18 Houston, a more affordable option with tribute holes from some of the world's most well known courses.

Okay, this is a pricey option, but Trump National Doral Miami, featuring the famed and revamped Blue Monster Course, is right next to Miami's airport. The 800-acre, 90-hole luxury south Florida golf resort has been a host venue on the PGA Tour for decades. It has a fresh new look courtesy of its owner, Donald Trump, who bought the resort out of bankruptcy in 2012. The famed Blue Monster Course is now more than 7,500 yards long thanks to an extensive renovation by architect Gil Hanse. The resort also includes the McLean Signature Course, designed by resident teaching pro Jim McLean, and Greg Norman's Great White Course, which was redone in 2005.

Although Oakland and El Paso's airports aren't among the nation's busiest, the golf courses next to them are two of the best. The Johnny Miller-designed Metropolitan Golf Links is right next to the runways at Oakland International Airport, which is listed as the 33rd-busiest airport in the country. Folks who fly into the Bay Area on Southwest Airlines often use Oakland instead of San Francisco as their destination and play Miller's fun layout while watching the jets take off and land.

And finally, Butterfield Trail Golf Club is actually on the grounds of El Paso (Texas) International Airport. Not only is it perhaps the best airport course in the country, but also this big Tom Fazio-designed linksy layout is rated the third-best municipal golf course in the U.S. by Golfweek magazine, ahead of such esteemed venues as Torrey Pines and TPC Scottsdale. Best of all, green fees are around $50 or less for a golf experience that might rank as the best on your trip. 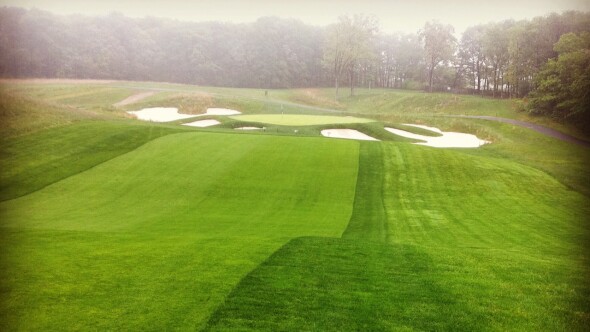 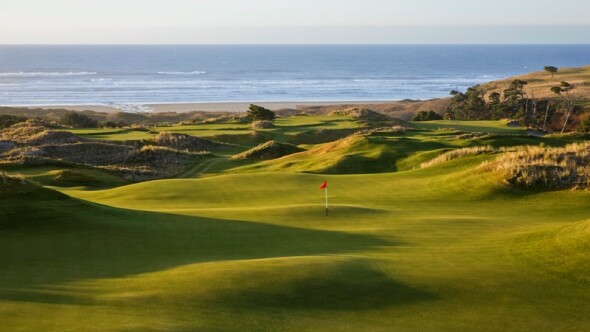 Articles
5 Min Read
The 10 best par-3 courses in the U.S. you can play
In celebration of the Masters Par 3 Tournament on Wednesday, here are my favorite short courses you can play in the U.S. 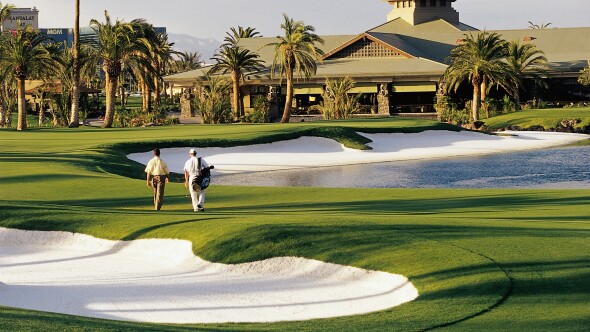 Galleries
15 Images
Ultimate golf on the Vegas Strip at Bali Hai
Bali Hai Golf Club offers guests an ultimate golf experience right on the famed Las Vegas Strip. At Bali Hai, it's all about ensuring everything is perfect from the moment players set foot on the grounds until they drive away. No detail is overlooked and each and every player is treated as a VIP. 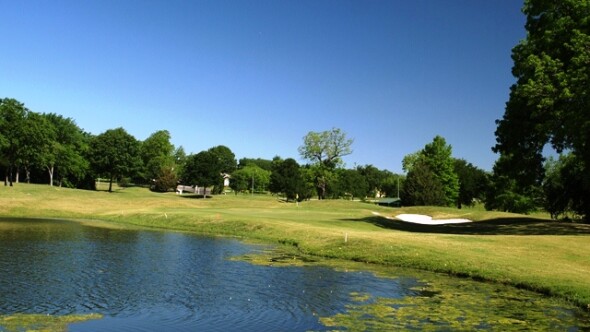 Articles
3 Min Read
From Tenison Highlands to Grapevine G.C., DFW-area munis provide north Texas golfers with plenty of great choices
The Dallas-Fort Worth area has a wealth of good to really good public golf courses. But what may surprise you is that it has one of the best collections of municipals courses in the country. Both Dallas and Fort Worth proper have some pretty good munis, but even better are that many of the suburbs have some outstanding municipal layouts by some pretty good designers. Best of all, they're all very affordable. Here's a rundown of some my favorites.

Articles
7 Min Read
Special Edition: Taking a stand on reining in golf equipment is a Cool Golf Thing
Recent USGA and R&A announcements on golf equipment regulations augur well for the long-term health of the game.

Kira K. Dixon
Lifestyle Correspondent
Now Reading
Planely speaking: America's best golf courses near busy airports
New Cookie Policy
WE AND OUR PARTNERS USE COOKIES ON THIS SITE TO IMPROVE OUR SERVICE, PERFORM ANALYTICS, PERSONALIZE ADVERTISING, MEASURE ADVERTISING PERFORMANCE, AND REMEMBER WEBSITE PREFERENCES. BY USING THE SITE, YOU CONSENT TO THESE COOKIES. FOR MORE INFORMATION ON COOKIES INCLUDING HOW TO MANAGE YOUR CONSENT VISIT OUR COOKIE POLICY.
CONTINUE
Search Near Me