Reminiscing about golf and Guinness on St. Patrick's Day: My 10 favorite places in Ireland Sitting on the patio at Old Head Golf Links and admiring the view of the 18th green never gets old. Jason Scott Deegan/Golf Advisor 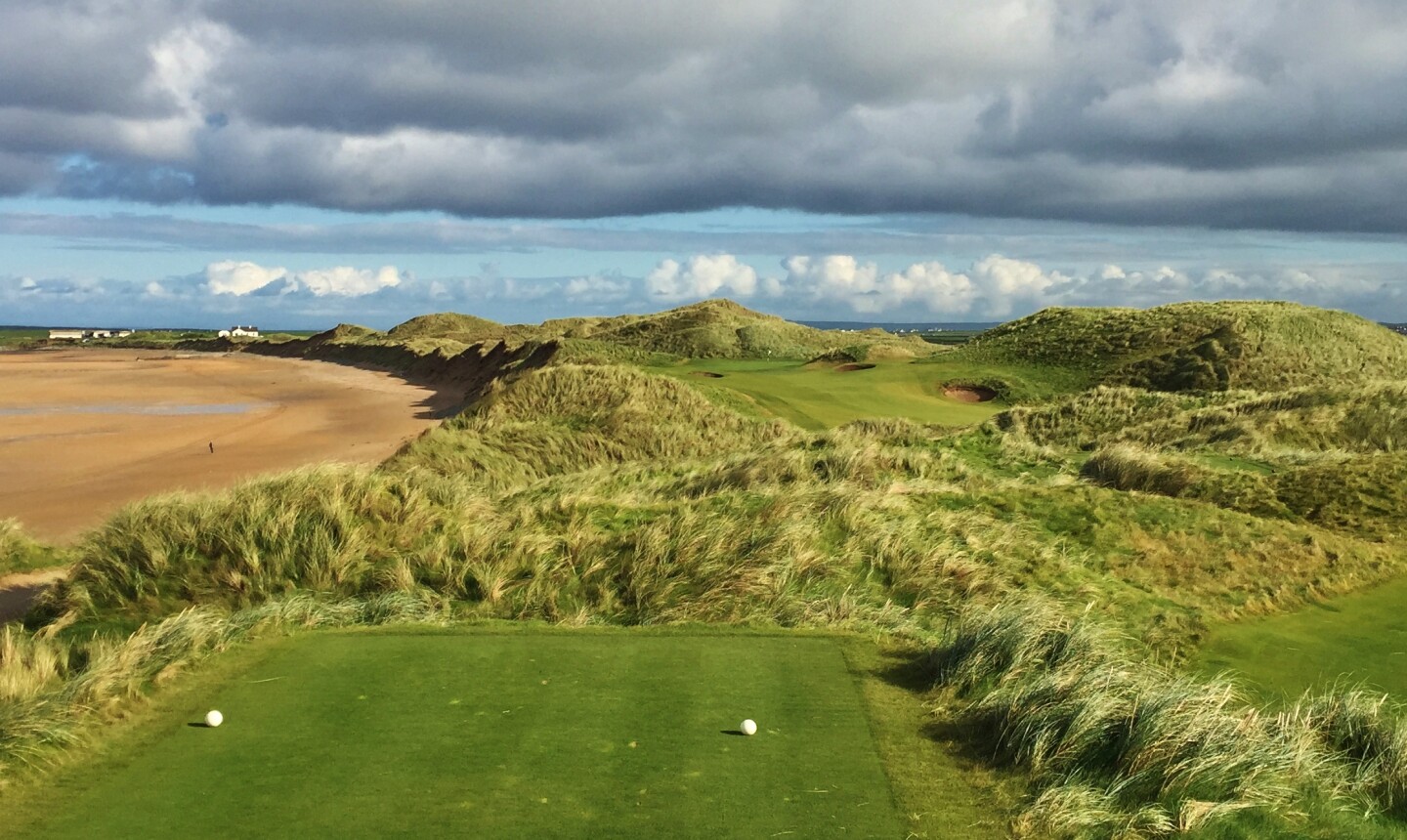 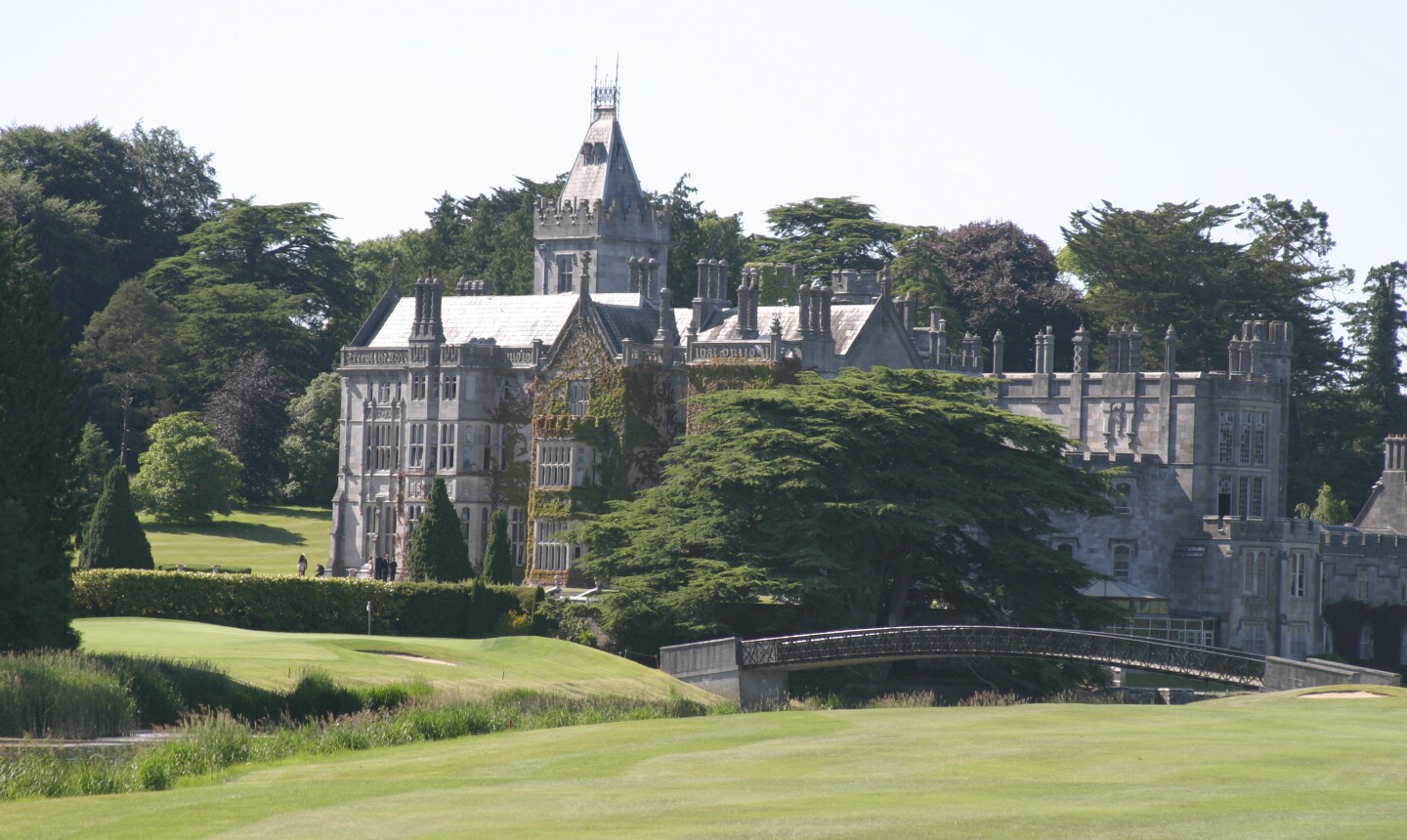 The Adare Manor Golf Club climaxes near the 18th green in the shadow of Adare Manor, which isn't a castle but a "calendar house. Jason Scott Deegan/Golf Advisor 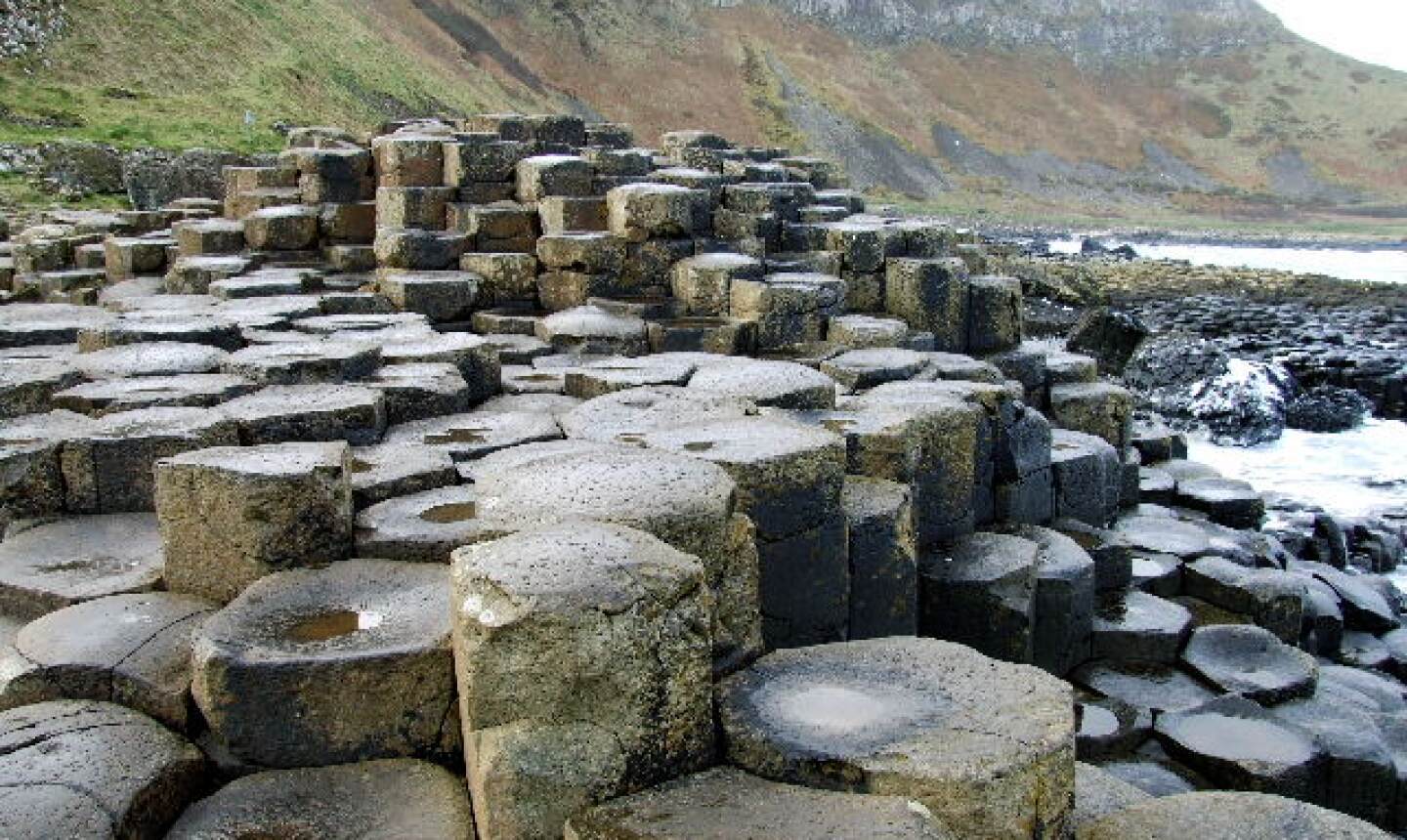 The Giant's Causeway in Northern Ireland showcases Mother Nature at her most creative. Brandon Tucker/Golf Advisor 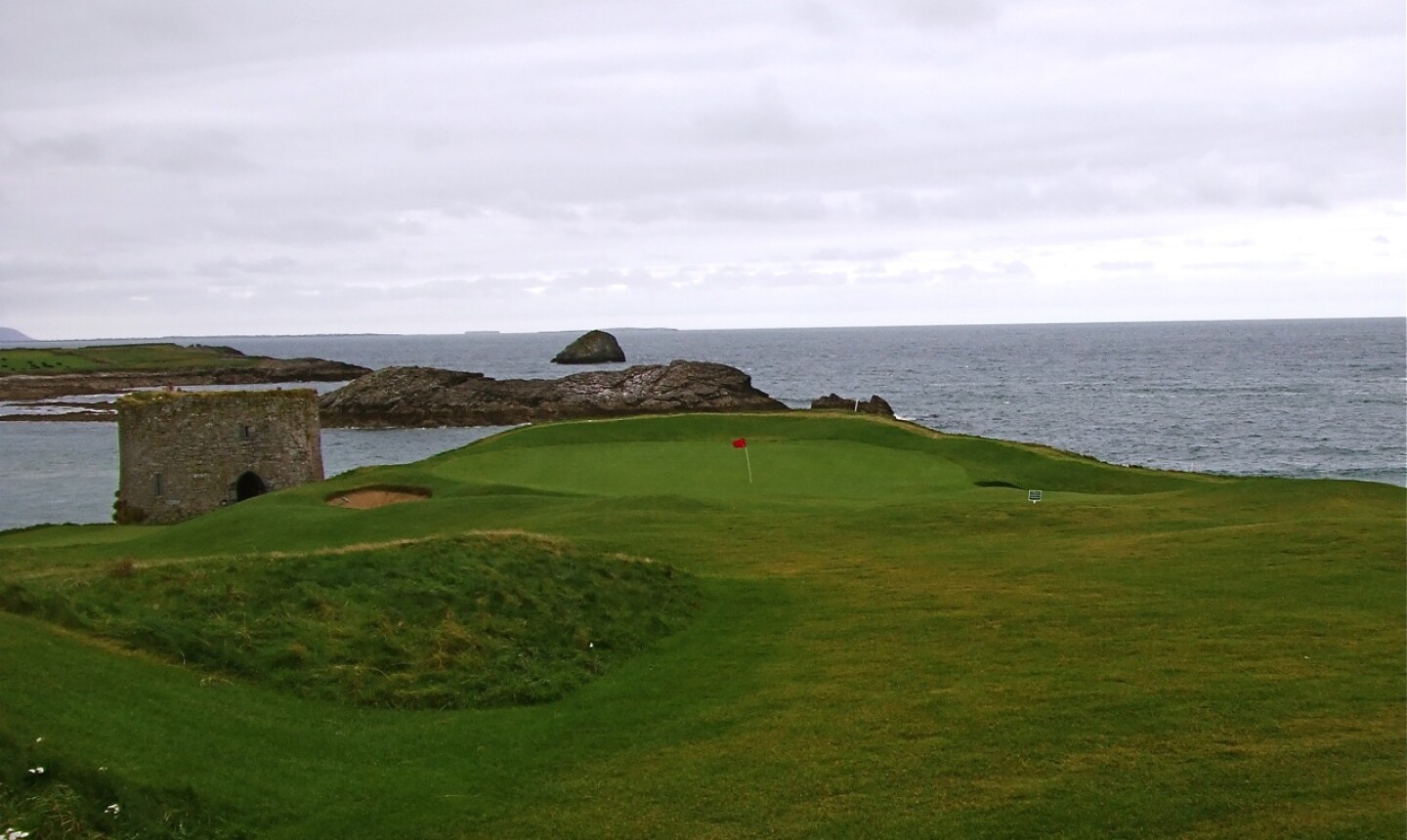 I always get sentimental on St. Patrick's Day.

Gone are the days of drinking green beer with friends, spending all day at a bar reveling in March Madness.

My current St. Patty's Day reality more closely resembles today's itinerary: driving the kids to school, writing another golf story and then taking the kids to the orthodontist to spend all my money on braces before gymnastics and baseball practices.

Whenever I need a good smile, I just daydream of Ireland, the land of milk (I mean Guinness) and honey (links golf). I've been to Ireland more times than I have fingers. I'm not Irish, but it still feels like home. I've reached into my memory banks for my 10 favorite places in Ireland and Northern Ireland. They're not all on golf courses, yet they're all related to golf in one way or another. Just make sure to read it after the buzz wears off. Sláinte!

Even my fear of heights won't keep me away from the 700-foot Cliffs of Moher along southwest Ireland's rugged Atlantic coast. They're so mesmerizing they don't seem real, even when I'm walking just feet from the edge. On my latest trip to Ireland last fall, I chose to tour the cliffs again over playing down the road at Lahinch Golf Club, one of my favorite links in the world. That's sayin' something.

I had no idea what I was getting into when my tour bus full of golf journalists pulled into the parking lot of the Giant's Causeway in Northern Ireland more than decade ago. The 40,000 interlocking basalt columns, the result of an ancient volcanic eruption along the Irish Sea, showcase Mother Nature at her most creative. This natural miracle has to be seen to be believed.

Gravity Bar at the Guinness Storehouse

Sure there are oodles of pubs with more life in downtown Dublin. This place has grown sentimental for me. The bar, at the "head" of the pint-shaped building overlooking Dublin city, is where I sipped my first true pint of Guinness on my first visit in 2003. Soooooo smoooooth.

The stone patio of Old Head's castle-esque clubhouse nudges out the 12th tee -- the harrowing drive over the abyss on the coastal cliffs -- for my favorite spot at Old Head. The view from the patio down the 18th hole to the lighthouse and out to sea will always be etched in my mind.

Now that the famous par-3 14th hole is gone -- wiped away by a 2014 winter storm -- the sixth tee box is my new go-to perch at Doonbeg. The short par 4 can be drivable if the wind is right. The magical Doughmore Beach rides sidesaddle on the left the entire way.

My whole night staying at this supposedly haunted 13th-century castle outside Dublin felt like a horror story written by Edgar Allan Poe. It stormed outside as I dined solo inside the small castle keep. Shadows grew longer as the evening wore on, dancing in flickering candlelight. I stayed up most of the night back at my room, spooked by stories of ghostly encounters experienced by the staff. No wonder I played so poorly at the K Club down the road the next day.

Approach to the 18th green at Adare Manor

What a stunning setting to end one of the best parkland golf courses in Ireland. The magnificent Neo-Gothic Mansion near Limerick -- a "Calendar House" with 365 stained-glass windows for each day of the year, 52 chimneys for each week, seven pillars in the lobby for the days of the week and four towers to mark the seasons -- and a massive tree and ornate bridge frame the 18th green.

Thankfully I didn't fall into the River Maigue on my approach like Richard Finch did while winning the 2008 Irish Open.

Unfortunately, the course and resort are closed until 2017 while undergoing a massive refurbishment.

Golf bar at Rozzers Restaurant inside the Killeen House Hotel

The Killeen House in Killarney might be designated three stars by the critics. But the hospitality of owners Geraldine and Michael Rosney rates closer to five. Their golf bar looks about the size of a large walk-in closet, but it serves up plenty of Irish "craic." Logoed golf balls from around the world plaster its walls, the perfect decor for golf ball collectors like me.

No. 3 at Tralee Golf Club

I love everything about Tralee Golf Club. I've told people I want my ashes scattered on Arnold Palmer's best design, located near Ballybunion. With so many scenic holes, it's hard to pick the best. I'll go with the most unique: the par-3 third hole, which is guarded by a castle tower turret dating to the 1190s.

Earl of Thomond restaurant at the Dromoland Castle Hotel

Just minutes from Shannon Airport lies Dromoland, one of the most authentic castle experiences in Ireland. A harpist serenaded our table as we dined in the ornate dining room. That's probably the first and last time I'll feel like a true king.

Old Bushmills Distillery, Northern Ireland. Anywhere at Ballybunion Golf Club. The Dingle Peninsula. The back nine on the Old Tom Morris Course at Rosapenna Hotel & Golf Resort in County Donegal. Perusing the ancient golf books in Pat Ruddy's personal library at The European Club. Buried in a plate of food at the Fishy Fishy Restaurant in Kinsale. 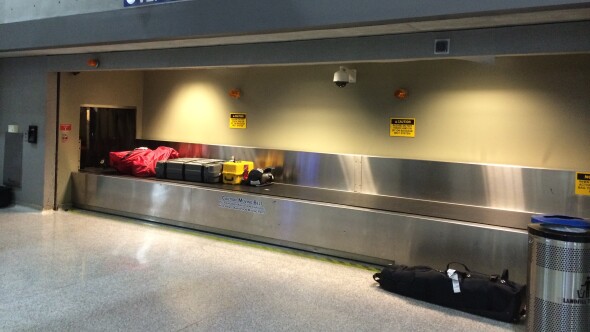 Articles
4 Min Read
Ship Sticks to the rescue for golfers traveling in 2022
Don't let the struggles of the airlines ruin your golf trip this year. Tim Gavrich
Senior Writer
Now Reading
Reminiscing about golf and Guinness on St. Patrick's Day: My 10 favorite places in Ireland
Search Near Me