Renovated Dubsdread golf course at Cog Hill is ready for the BMW Championship - and maybe a U.S. Open 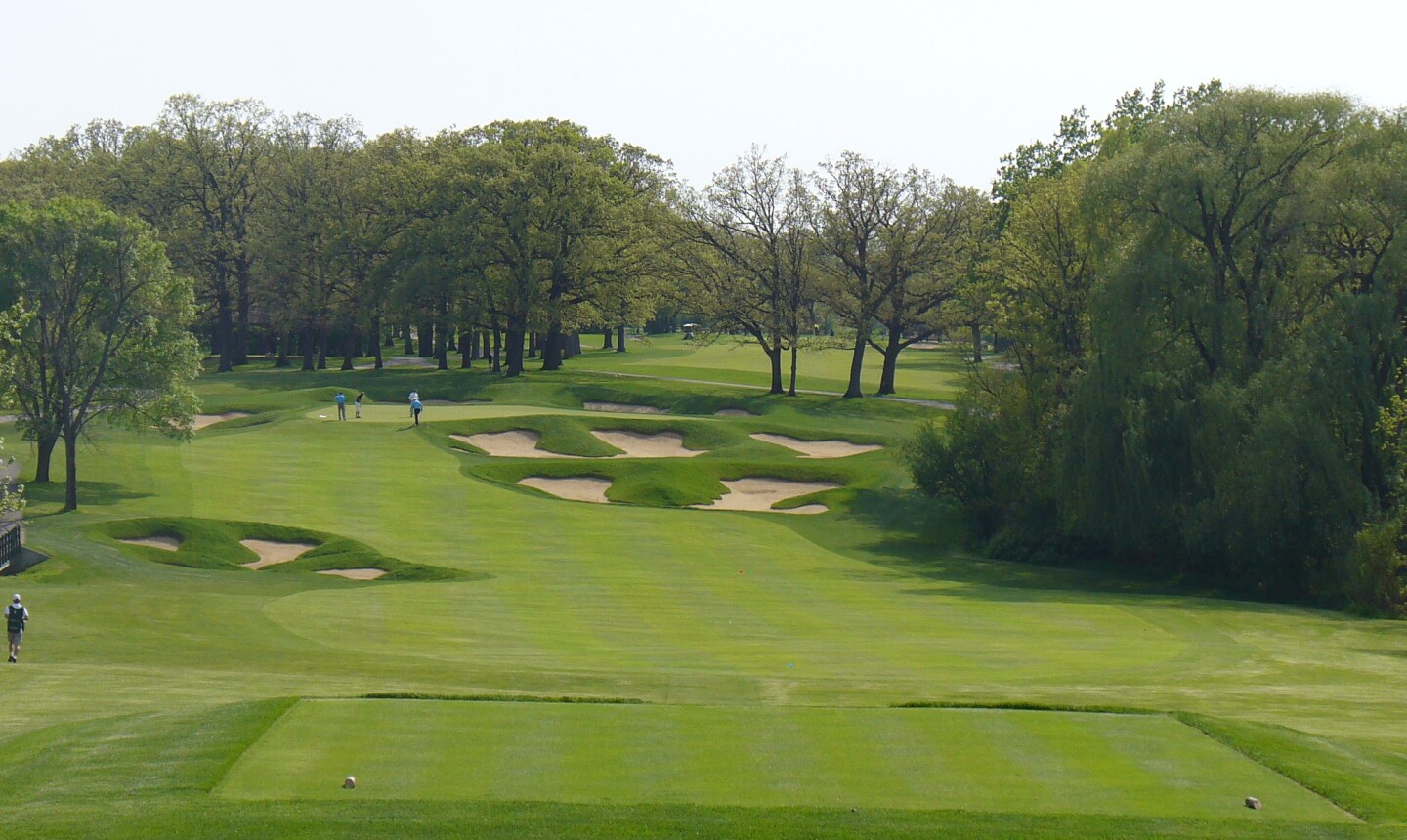 The 379-yard eighth hole at Cog Hill Golf & Country Club's Dubsdread is very strategic and can even be set up as a driveable par 4. Kiel Christianson/Golf Advisor 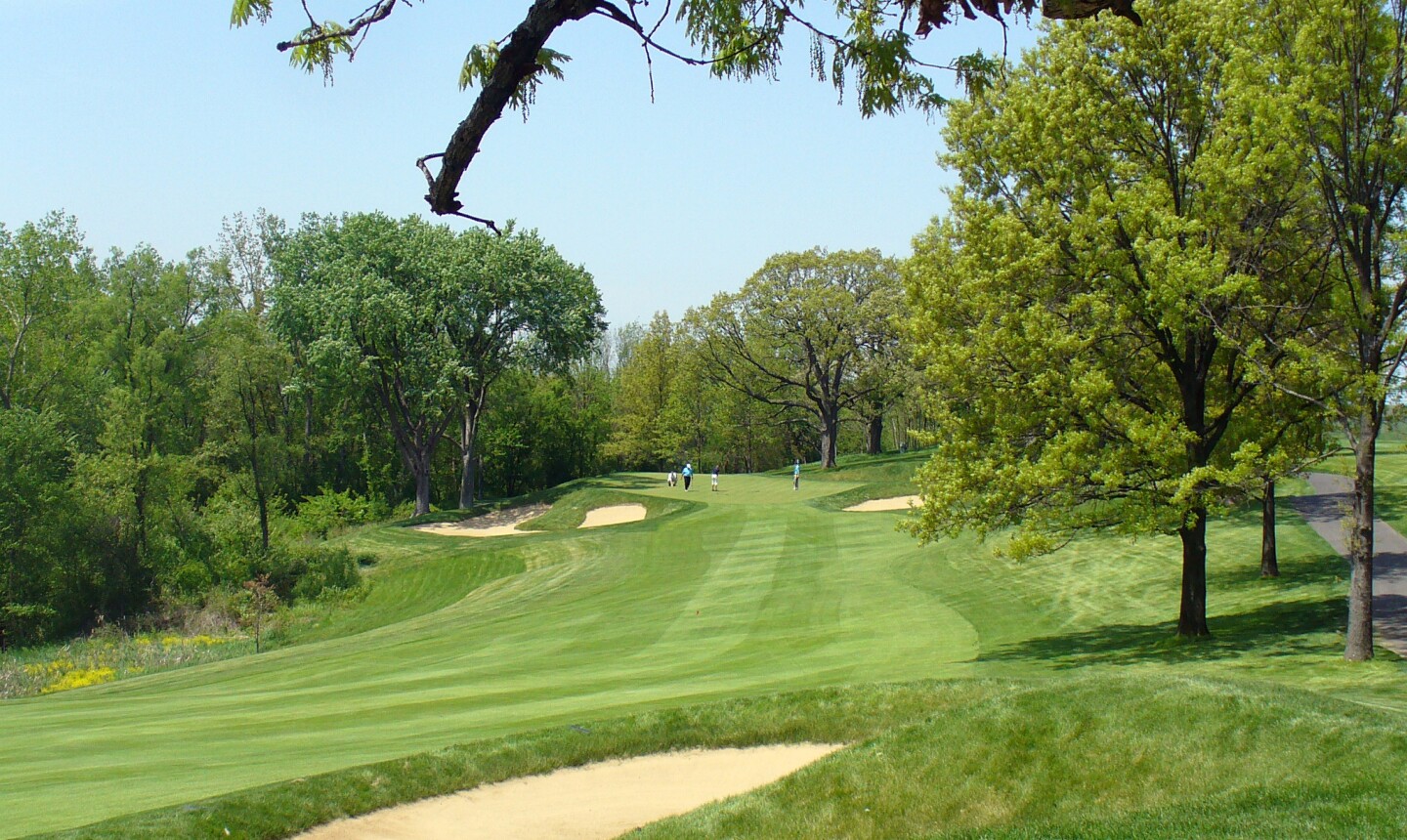 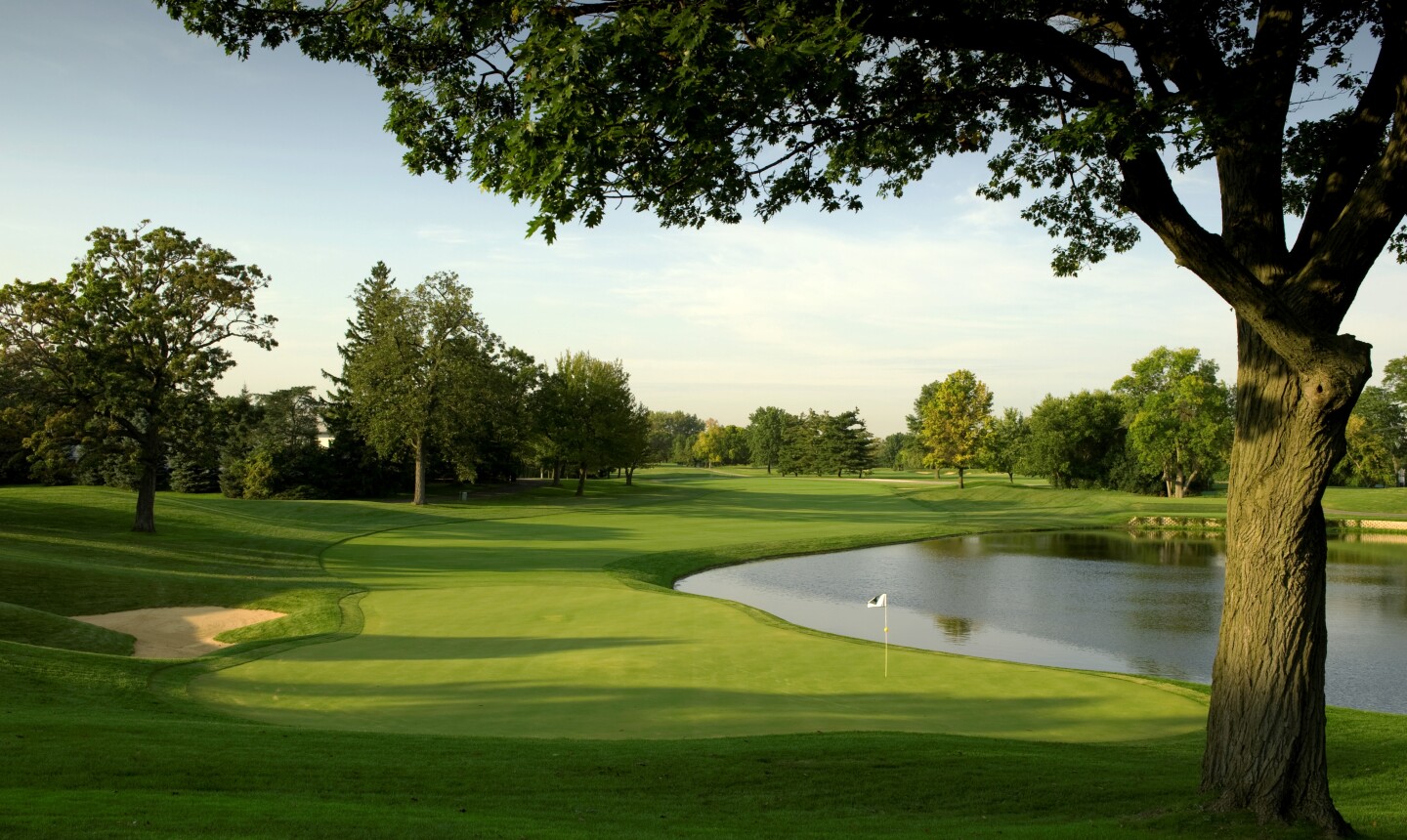 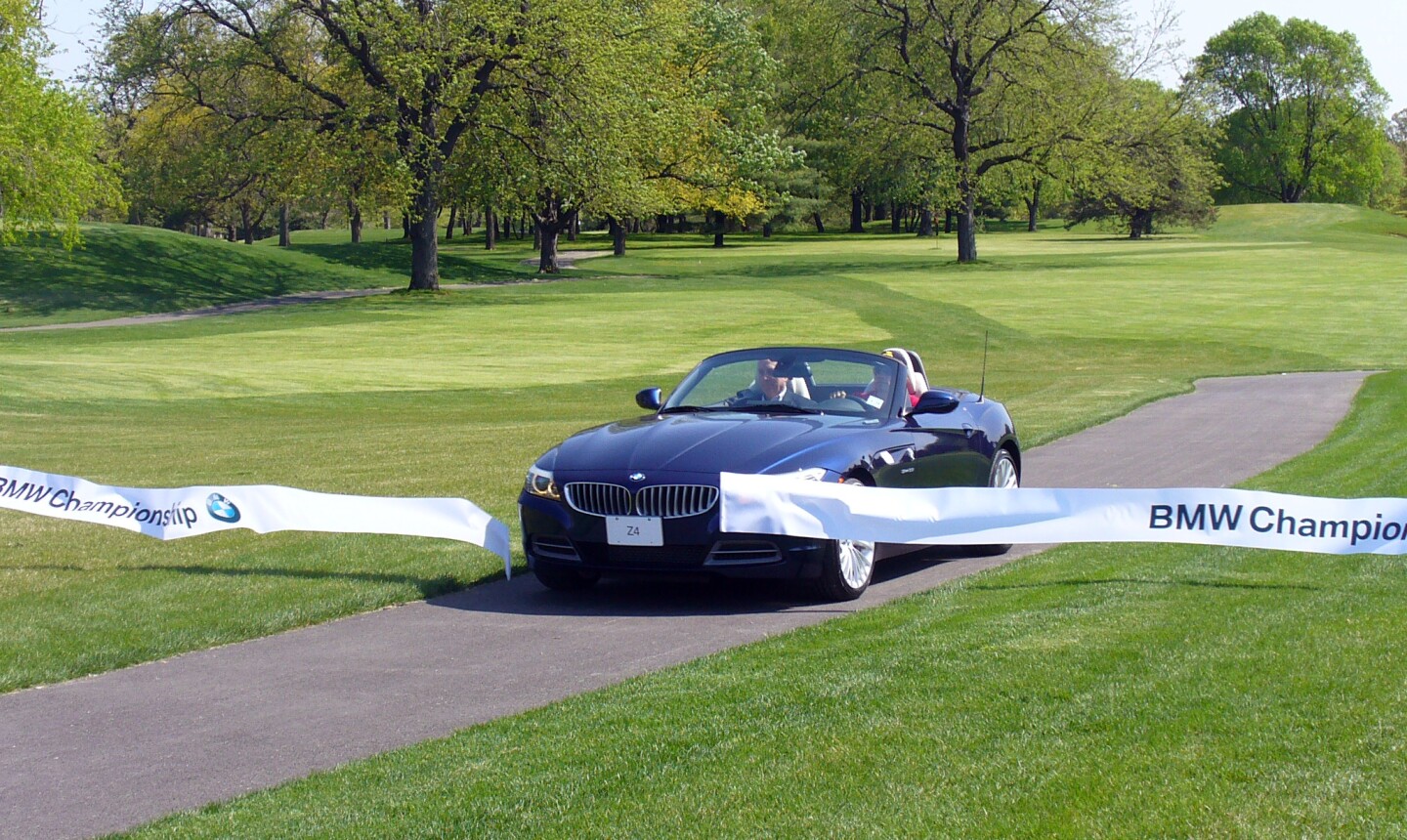 The primary goal was to bring a private-club atmosphere and tournament-quality golf to the golfing public. The result was the Dubsdread course at Cog Hill Golf & Country Club, the first daily-fee, upscale golf facility in the nation.

Joe Jemsek's second goal was to build a golf course that would someday host major championships. Along with a U.S. Amateur Public Links Championship and the Western Amateur, Dubsdread began hosting the PGA Tour's Western Open in 1991, and the BMW Championship in 2006.

In 2002, Joe passed away, and his son, Frank, became owner and CEO of Cog Hill. A tall, broad-shouldered, 60-something man, Frank carried on his father's legacy, hiring "Open Doctor" Rees Jones to renovate Dubsdread.

In May 2009, after a yearlong, $5 million facelift, what had been the best public golf course in Illinois and in the top 50 in the nation re-opened to great expectations for both public and tournament play.

The Open Doctor does Dubsdread

May 12, 2009: Dubsdread is unveiled for the media. The golf course will host the PGA Tour's BMW Championship for the coming three years, and 2008 BMW champ Camilo Villegas is on hand, as is the Open Doctor himself, Rees Jones.

Why's he called the Open Doctor, anyway? Well, he renovated both Congressional Country Club and Torrey Pines before their most recent U.S. Opens. The man knows what the USGA likes in an Open venue.

Jones also knows what Jemsek and the golfing public like, and he is quick to set the record straight on the renovation.

"Frank did this for the golfers and the land," declared Jones. Then, with quiet confidence, he added, "And hopefully to host a U.S. Open some day."

Jones went on to explain how he balanced the features of a daily-fee facility with the demands of a PGA Tour, and maybe a major, venue.

"We added some length, we pushed out the fairway bunkers, and we removed some shorter (bunkers) that penalized average golfers," he explained in a pre-opening press conference. "We moved some tees up, even. We really stressed making it more fun. We put the bunkers farther out. The greens are (now) ample size and most have tongues for lower approach shots."

Both Jones and Villegas, when asked about the lengthening of Dubsdread, responded the same way: "Overall length is meaningless."

Villegas even went so far as to say that he never even looks at the overall length of a course. Nevertheless, the renovation now allows the course to be set up at over 7,500 yards. However, thanks to the many newer forward tees, it can range all the way down to 5,400 yards for players of all skill levels.

The media hacks (wait, that includes me!) pressed Jones on whether Dubsdread was Open-worthy, though, and Jones responded again with matter-of-fact self-assuredness:

Jones continued to say that the man who does have a lot to say about it, Mike Davis (USGA course set-up guru who helped make the Open at Torrey Pines such a success) "has been here twice. I think they're very aware of the course. I think it's very similar to Torrey Pines and Congressional."

Jones ended with his own ringing endorsement of Dubsdread: "Working on this course and with Frank has been one of the highlights of my career."

After the press conference, I had the good fortune to play the pristine Dubsdread with Joe Jemsek, grandson and namesake of Dubsdread's patriarch, and a fine golf course architect (and player) in his own right. The younger Jemsek was Jones' assistant during the redesign, and his insight into the renovation was second to none.

"There's lots of talk about getting a U.S. Open," Jemsek said as we were looking for yet another of my stray tee shots. "But to be honest, it was a 45-year-old course that needed an update. We were really thinking about our weekend players."

Weekend players, as we all know, want a challenge, but they don't want to be bludgeoned relentlessly with penalty strokes and lost balls. This is the best feature of the new Dubsdread in my mind: It ebbs and it flows, but it never lets up completely.

Some holes offer legitimate birdie opportunities, while others simply demand four superb shots for a chance at par. Best of all, it is a course that allows mid-handicap players like myself to spray the occasional shot without losing a ball.

Take the nut-busting, 613-yard ninth hole. After pushing my tee shot horribly, I located it somewhere over near the 10th green. (Is it too late to yell, "Fore"?) Trees and bushes blocked all but one escape route back to the fairway, aside from a 4-inch sapling that I couldn't have hit with a hundred balls if I were trying to. Naturally, I hit that sapling dead-on and ended up carding a double-bogey.

The point is, the golf course let me find the ball, and let me try to salvage the hole; all I had to do was execute, and I didn't. That's perfect golf.

I asked the younger Jemsek what his favorite hole on the new course was and got a somewhat surprising answer: the 379-yard eighth. Actually, the choice isn't so odd. From the blue tees where we played it, the eighth measures just 341 yards.

There's little trouble, other than severe and severely penal sand bunkers around the green, beginning at about 30 yards out. In a major tournament, this hole could be set up on the weekend to tempt big-hitting tour pros to drive the green. (I can hear the cheers from the gallery now, echoing all the way to Lakeshore Drive.)

Perhaps my personal favorite is the 215-yard, par-3 14th, which is also a big favorite of local players but for a different reason. For regulars, the slightly downhill par 3 offers a chance for a heroic, arcing mid- to long-iron over bountiful bunkering to an undulating green.

For me, the allure is in the back story, shared by Jemsek: "These back tee boxes are new. We finally procured the land from the convent that used to own the land on this side of the course."

It turns out that the prayer house of that convent is still used by the nuns, and the prayer house sits just above the current new tees. "The nuns didn't want to sell for the longest time," explained Jemsek. "They were unhappy with all the cursing."

So, as a personal plea to all of you who play Dubsdread: Watch your language on the 14th tee.

Immediately prior to my visit to the new and improved Dubsdread, I coincidentally received a copy of Golf Digest's ranking of "America's 100 Greatest Public Courses." In it, Cog Hill No. 4 (Dubsdread) was ranked 45th. However, this ranking was done before the renovation.

I will make this prediction now: The Open Doctor's facelift, with an eye toward both daily-fee golfers and a U.S. Open, has easily vaulted Dubsdread into the top 10, with the likes of Pebble Beach, Whistling Straits, Bethpage Black, the Stadium course at TPC Sawgrass and Pinehurst No. 2. Keep in mind also that greens fees for Dubsdread are $150 (including cart), and thus far, less than most of the other golf courses in that list.

In other words, golfers in the Chicago-land area are truly blessed by the golf gods - and by Frank Jemsek (a recent Illinois Golf Hall of Fame inductee and sort of a golf god himself) - to have Dubsdread at their back door.

Not only is Dubsdread amazing, but there are three other 18-hole courses at Cog Hill. In fact, No. 2 and No. 4 (Dubsdread) have been ranked by Links Magazine as one of the top 10 best two-course combinations in America - and, again, that was before the renovation.

Facilities are likewise equivalent to almost any private club you can name. I am particularly fond of the richly appointed, wood-and-leather bedecked bar just to the right of the main entrance to the clubhouse. I recommend visitors order a pint and wander to the back of the room, where they will find an old persimmon driver in a shadow box, with the following sign: "Joe Jemsek. 1934 World's Fair Longest Drive. 501 yards."

The story behind that driver is too long to include here, but let me close with this: That unassuming club led directly to Dubsdread, and, maybe someday, a U.S. Open. 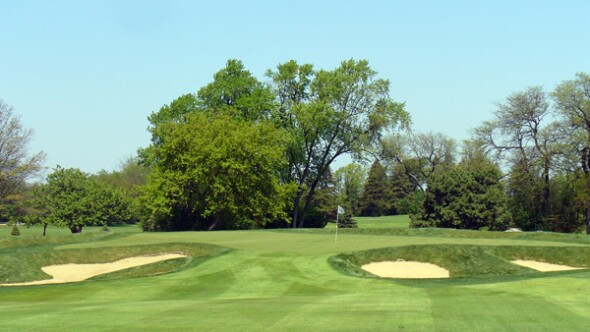