Mold-breaking course will give pros an unfamiliar test, courtesy of Gil Hanse.

When it wasn't having to defend itself against criticism from Justin Thomas and other PGA Tour pros, last week the USGA announced its slate of Sectional Qualifying locations for this year's U.S. Open at Pebble Beach Golf Links.

The most intriguing of those 12 "Sectionals" sites is Streamsong Black, the newest of the three courses at the mold-breaking Streamsong Resort in remote south-central Florida. The 36-hole qualifier on June 3 comprising between 40 and 70 players (depending on how the more than 100 Local Qualifiers play out) has the potential to be one of the most fascinating - and potentially controversial - episodes of competitive golf all year.

Why such expectations? Because this is not any old golf course, never mind a course for high-level competitive golf.

All about the greens 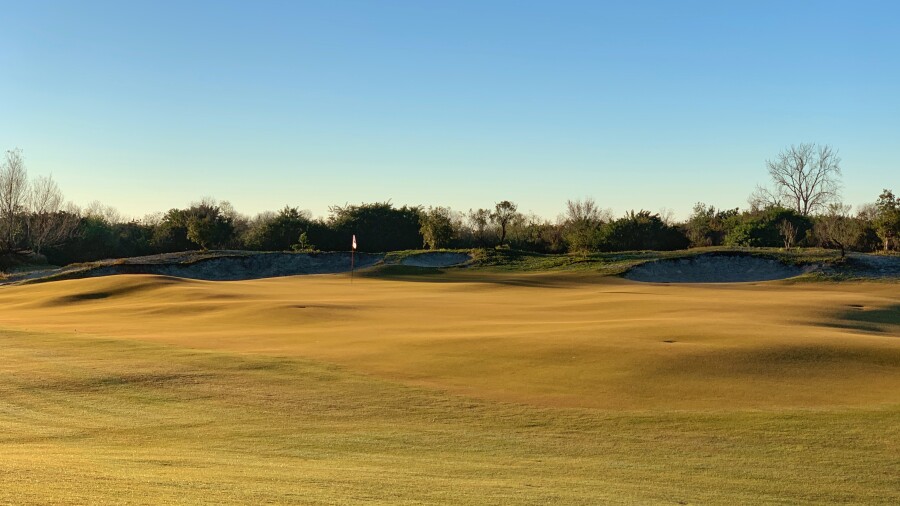 Streamsong Black's first green sets golfers up for quite a test of their putting skills. Matt Ginella/Golf Advisor 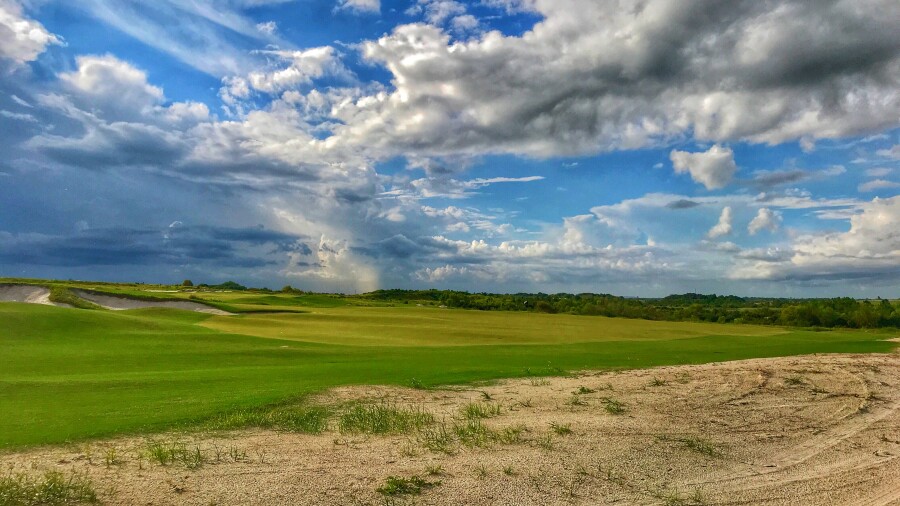 At more than 70 yards long and 50 yards wide, the eighth green at Streamsong Black is gigantic. Tim Gavrich/Golf Advisor 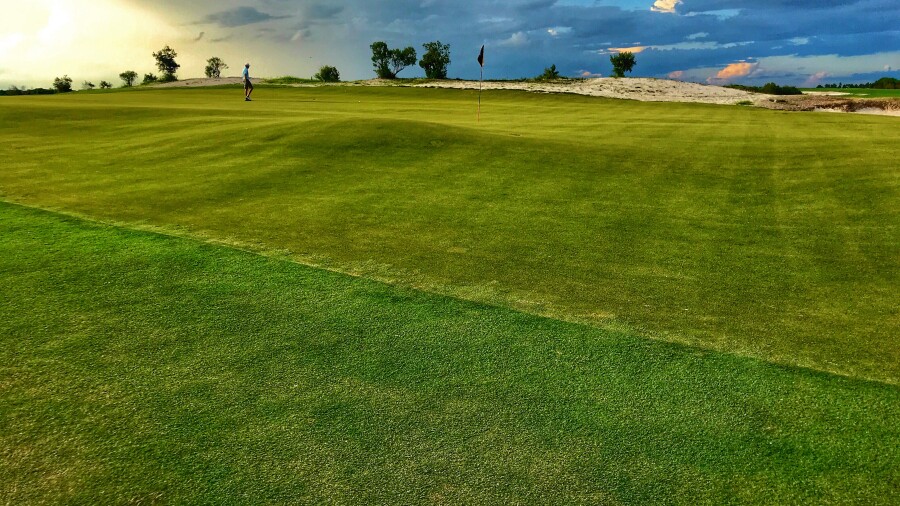 Mounds and shoulders, like this one at the 10th, make greenside recovery shots a test of touch at Streamsong Black. Tim Gavrich/Golf Advisor 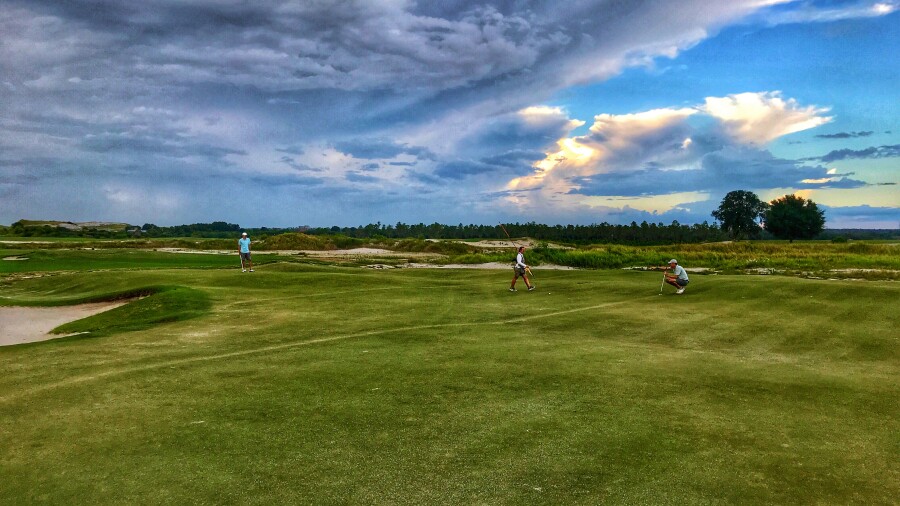 The Gil Hanse-designed Black will make for an unfamiliar, unconventional test in a few different ways. The biggest (literally) of these will be the greens, which are the largest, most complex and potentially confounding of any golf course I've ever played. Measuring some 11 acres, collectively, the surfaces maintained at green height average about 11,000 square feet each. They grew considerably during construction, as Hanse's team discovered that the shaving down outlying slopes around the original surfaces would make for exciting and unique potential short game recovery shots, particularly with one's putter.

I happen to think they make the course an absolute blast, but knowing competitive golfers, there might be some big complaints about "fairness." There are a number of blind and semi-blind shots at Streamsong Black, including the approach to the now-famous ninth, whose massive Punchbowl green is so sunken in the middle that the only way to tell where the hole is located is to consult a sign by the tee or the day's pin sheet. There is no flagstick long enough to be visible from the fairway, and given that pros tend to praise courses that are "all right there in front of you," they will have to overcome some mental and psychological hazards at Streamsong Black. Players will be wise to conscript the resort's caddies to guide them past all the pitfalls.

Unlike recent Florida Sectionals sites like Timuquana Country Club (2016) outside Jacksonville and The Bear's Club (2015, 2018) in Jupiter, Streamsong sits on hundreds of vertical feet of pure sand, meaning that the soaking rains that spring storms can produce are not likely to take too much fire out of the normally very firm fairways and greens. Those fairways measure upwards of 75 yards wide, meaning long hitters may be tempted into making overly wild swings. The contouring of the fairways at Streamsong Black tends to pull off-line tee shots into the bordering sandy waste areas faster than one might think, making them play narrower than they look. This is anything but typical Florida golf, and unprepared competitors may find themselves struggling to post the kinds of scores they'd like to.

This is not to say the Black is not scoreable at all. Depending on the hole locations the FSGA (running the event for the USGA) sets, players will be able to use many of the slopes on the greens to work shots toward the hole, resulting in good birdie looks. Furthermore, the course is a par-73 layout with five par 3 and a couple short par 4s, which can offer up birdies and eagles...as well as bogeys and doubles for those who get out of position. Because of the way the course challenges the player, scoring will likely be more volatile here than at most other Sectionals sites. I plan to catch some of the action on June 3. If you're in the area and want to be entertained by some great golfers' triumphs and trainwrecks, I'll see you there.

FYI: You can receive a $100 travel credit for your next trip to Streamsong if you're a member of GolfPass.

In just a few short years, Gil Hanse has become the high-profile tournament venue's architect of choice, both for renovation and original work.

In 2020, the U.S. Open will be held at Winged Foot Golf Club's West Course, which Hanse restored in 2016. In 2023, Los Angeles Country Club's North Course, which was a smashing success during the 2017 Walker Cup matches, will get its first U.S. Open turn. Hanse and his team have been restoring the George Thomas masterpiece since 2006.

The USGA's recent all-at-once announcement of upcoming U.S. Amateur host sites included two courses where Hanse is working or has worked: Ridgewood Country Club (2022 U.S. Amateur host) and Merion Golf Club's East Course (2026). Though he didn't work on the recent restoration to Pinehurst No. 2, this year's main U.S. Am host course, Course No. 4, which Hanse completely redesigned in 2017 and 2018, will be the second course used for the stroke-play qualifying rounds of the tournament.

Hanse is tight with the PGA of America as well. He has been tapped to design one of the organization's two new courses at its new Frisco, Texas headquarters over the next couple years, and it seems likely that it will get on the PGA Championship and/or Ryder Cup schedule before long. Meanwhile, Hanse's ongoing renovation work at the Perry Maxwell-designed Southern Hills Country Club is being done with an eye toward a PGA Championship sometime in the 2020s, and Aronimink Golf Club outside Philadelphia will host the 2027 PGA. Not to be forgotten, Hanse's two-year renovation of Oakland Hills Country Club's South Course, outside Detroit, should put the historic Donald Ross design back in consideration for a major championship as well.

Hanse's ability to both restore classic designs and execute a bold, form-pushing vision help make him one of the most in-demand architects alive.

I'm surprised Gil Hanse has risen to such prominence. I've only played one course he designed (Bond Head North Course in the Toronto area), and found it to be really contrived and not enjoyable to play. And, unfortunately, the feedback from pretty much everyone who played it was that they did not like, or enjoy playing, the course. Last I heard it was going to be demolished and the land used for a housing development. The first time I've ever been supportive of that happening! Perhaps it's a case of not judging a designer based on just one course.......

Peter, neither of the courses at Bond Head were designed by Hanse.

Streamsong Black was loads of fun. From 6400 yards I was able to hit all 18 greens (first and likely the only time I'll ever do that) but putting can be a challenge even with a caddie (I had 37 putts, 2 birdies and 3 bogeys). Yes, the greens were abolutely huge but the "intended" putting surface is whatever is inside the sprinklers. Outside of that and things get interesting. The pros will be just fine, in fact I bet they tear it up.

RyckyRych, I would agree that there will be some low scores, but I also think the nature of the challenge will get in several players' heads a little bit. Golfers who play more straightforward courses are used to reaching for a wedge and preparing to hit a little pitch or chip shot after a mediocre approach. At the Black, they'll be putting from upwards of 30 or 40 yards away, which is not something they're used to. I think it will drive some of them a little nuts if they're not extra-prepared.

Any of these guys that take a local caddie will have a good chance of going very low. If you’re a bad lag putter you will be exposed however. Article says 5 par 3’s but it’s actually 5 par 5’s. So many birdie chances on this course. Handful of birdies or more per round is very likely for the best players in the field

I get that completely and yes, #9 would be a great example of it. Me, I thought it was really cool to have something that different (and yes, I'm a fan of Mike Strantz also). The blind shots didn''t bother me too much, especially when you have a caddie pointing you in the right direction. In fact, that probably helps me more than I realize.

I have played all of the Streamsong courses and found the Black course to be my least favorite. The greens are stupidly large and there are numerous blind shots. It is also in the middle of no where. Overall, it is not worth the money imo.

I am a legit 30 handicap who plays a LOT of golf (4 to 5x a week in season) so it's a bit embarrassing. Having played all three courses at Streamsong I have to admit the Black was by far the most fun. That all being said, as long the guys are playing the same course it's fair. The Black really isn't that tough of a course as long as you can putt and have a reasonable ground game. Yes, the Black is very different from most any other courses top level (or any players) will play but that doesn't mean it's not a fair test. There will be scores in the low 60s and scores approaching 90. I'd love to be there to watch but I'll be in Northern Ireland playing the Coastal Causeway Links tournament.

Oh yeah - I made par on The Punchbowl and was a foot from a bird so trust me it's not that tough of a hole! It's fun as hell though.

By Jason Scott Deegan
Read More
Load More
Popular
A hole-by-hole tour of Torrey Pines South, the 2021 U.S. Open host
Strokes Gained isn't just a stat for the pros anymore. Here's why and how you can use it in your game
Golf travel's greatest debates
Punch Shots: Our staff reacts to the top 100 lists
Editorial Staff

Kira K. Dixon
Lifestyle Correspondent
Now Reading
Streamsong Black is an inspired (and potentially controversial) US Open Sectionals choice
New Cookie Policy
WE AND OUR PARTNERS USE COOKIES ON THIS SITE TO IMPROVE OUR SERVICE, PERFORM ANALYTICS, PERSONALIZE ADVERTISING, MEASURE ADVERTISING PERFORMANCE, AND REMEMBER WEBSITE PREFERENCES. BY USING THE SITE, YOU CONSENT TO THESE COOKIES. FOR MORE INFORMATION ON COOKIES INCLUDING HOW TO MANAGE YOUR CONSENT VISIT OUR COOKIE POLICY.
CONTINUE
Search Near Me