SCOTTSDALE, Ariz. -- If your definition of a successful marriage or relationship is the couple that plays golf together stays together, then the Scottsdale, Arizona area has some great vacation spots for you.

From the Fairmont Scottsdale Princess to The Phoenician, Westin Kierland or Talking Stick Resorts, the area is primed for couples looking to relax and take in a little golf. Some have courses that are more couple friendly than others, but all of them offer the pampering, dining and accommodations that are honeymoon worthy.

Of course, some are better than others in certain areas.

Here are my picks for the best in each category:

To me what defines the best golf courses for couples are layouts where, no matter your skill level, both players can enjoy them. (And I'm not assuming here that the better player is the man, by the way.) No resort probably fits the bill better than the two Bill Coore-Ben Crenshaw-designed courses at Talking Stick Resort. Said Coore of its design: "The land was totally flat and treeless, but the beauty was for golf only and not a housing development. We were told to make the courses as opposite as we could, but make them user friendly."

And that's exactly what they did. The forward tees are forward enough so those players aren't hitting hybrids into every green and there are no forced carries. Yet, it you play either one of the courses from the back tees, there's plenty of challenge. (Talking Stick was the site of the 2014 Golf Channel Am Tour National Championships.) Both are also interesting. Talking Stick North has more of links-style look to it, while the South Course is more parkland style. Both are on most top 10 lists for public golf courses in Arizona.

First off, it's hard to go wrong at any of these resorts when it comes to dining -- almost all of them are exceptional. But having dined at the newly revamped clubhouse restaurant at the TPC Scottsdale -- Toro Latin Restaurant & Rum Bar -- I have to give the edge to the Fairmont Scottsdale Princess. In fact, Toro might be one of the best, if not the top, golf course clubhouse restaurant in the country with its Pan Latin fusion fare that includes something called a suviche bar (a combination of sushi and ceviche), plus its selection of more than 100 rums. Add to that the already established Bourbon Steak Restaurant (with James Beard award winner Michael Mina) and perhaps the best Mexican restaurant in town with La Hacienda, and you've got one great culinary destination.

With two Jay Morrish-designed golf courses (Boulders North and Boulders South) and its casita-style resort laid out among ancient giant boulders, the Boulders is a true retreat in every sense of the word. The stars are brighter, the nights are quieter and the air is fresher there, it seems. Take a stroll in the daytime or the night and you might feel like you're the only people on the planet. Then retreat to your individual suite and relax in front of the fireplace, where if you don't have the TV on, you can hear the coyotes at night. Walk outside and you'll see 100 times more stars in the sky than you likely see at home.

From the casino to the rooftop club Degree 270, the action is nonstop at Talking Stick Resort. The casino floor includes more than 50 table games, 800 slot machines, and Arizona's largest poker room. There's also plenty of live entertainment from big name bands and comedians in the Salt River Grand Ballroom as well as The Showroom as well as outdoor concerts and special event. And there's also live music at the resort's lounges, which include Degree 270, located on the top floor next to Orange Sky Restaurant.

There are so many good ones to choose from here, but if I had to narrow it down, I'd pick between the Four Seasons Resort Scottsdale at Troon North and the Fairmont Scottsdale Princess. You can't go wrong either way, but I'll give the edge to the Four Seasons with its adobe casitas are spread throughout a wonderful piece of property that takes in the true beauty of the desert (this was definitely a candidate for quietest spot as well). Not only do adobe casitas blend flawlessly into the desert landscape, but each room is packed with thoughtful features. You'll find an electronic fireplace, large bathroom with separate shower and extra-large tub, iPod-ready alarm clocks and dimming lights throughout. Guests also will enjoy the breathtaking views from the patios and interior colors capture the natural tones of the desert.

When it comes to romance, is there anything better than a view? Or how about a private area for dining? Orange Sky offers both as well as fine dining that includes fresh seafood, steaks and an extensive wine list. (Complimentary roses for the ladies on Valentine's Day is also a nice touch.) Located atop the 15th floor of the hotel, the restaurant provides the best 360-degree views of the Valley. The hardest time to get a reservation? Sunset, of course. Seating ranges from large tables to private enclosed booths to outdoor arrangements.

With its 27 holes of golf that feature designs that help funnel drives back to the fairways, the Westin Kierland was also a candidate for most couple-friendly golf. But more than that, the ideas never stop flowing at this Scottsdale resort. Golfwise, there are several ways you can enjoy your round -- traditionally with a golf cart or take a Segway, GolfBoard or Golf Bike. Couples might really enjoy the Golf Bikes, which provides terrific exercise while playing the Mesquite, Ironwood and Acacia golf courses. The GolfBoard, which simulates surfing or wakeboarding on the course, is also a great option for the adventurous type. And when you’re not playing golf, you'll want to check out the Flowrider, a surfboard experience in the pool area. Add to that the sunset bagpiper and The Scotch Library, which provides more than 200 labels, and you've really got a unique experience.

Most lavish: The Phoenician

Ranked among America's best resorts, the Phoenician certainly represent the gold standard in Arizona luxury accommodations. This AAA Five Diamond Resort has it all -- opulent accommodations (including casitas near the course), casual and elegant dining, tennis and pools and the 22,000-square-foot Centre for Well-Being spa. There's also a $75 million art collection that ranges from Navajo rugs to 17th-century Dutch landscapes. And the Oasis Pool Complex includes its famed "Mother-of-Pool" serenity pool. The genuine Mother-of-Pearl tiles, imported from Italy at a cost of more than $1 million, were painstakingly placed to create a glistening, iridescent sanctuary, much like the inside of a sea shell. Dark blue tiles on the rim are hand-colored and specifically designed for the area. To date, The Mother-of-Pearl pool at The Phoenician is the most expensive pool in the state of Arizona.

With years of history and one of the best locations in the valley, it's hard to go wrong with the JW Marriott Camelback Inn. This world-class retreat, envisioned by hotelier Jack Stewart in the 1930s, is laid out among the picturesque Sonoran Desert in the shadow of Camelback Mountain. Miles of hiking and horseback trails along with plenty of opportunities to relax make this an ideal resort for couples who want to follow in the footsteps of the rich and famous who have been coming to the Camelback Inn for decades. In 2007, the resort underwent a multi-million-dollar renovation that included a reinvention of the main building, rebuild of the ballroom, a courtyard with water and fire elements as well as two new restaurants.

If I had to narrow it down to one, it'd be hard not to pick the famous Golden Door at Boulders Resort. The 33,000-square-foot Golden Door Spa blends Eastern and Western influences in its design and treatments. Massages are great, but men, in particular, should not dismiss the gentleman's facial. Facials can help reverse some of the damage caused by exposure to the harsh sun. Plus, the treatment is relaxing in its own right, and it comes with a neck and face massage performed by the spa's highly trained therapists. Plus, if you're into that sort of thing, the Golden Door offers couples massages.

Still, I'd be remiss if I didn't mention some of the other spas in the Scottsdale area, which all pamper to the max. The Fairmont Scottsdale Princess offers a golfer immersion treatment, the Four Seasons Resort Scottsdale at offers something called the "Head over Heels" treatment, which involves two therapists working in tandem, and it's hard to go wrong at the Centre for Well Being at the Phoenician, The Spa at the Marriott's Camelback Inn or Agave, The Arizona Spa at the Westin Kierland Resort. 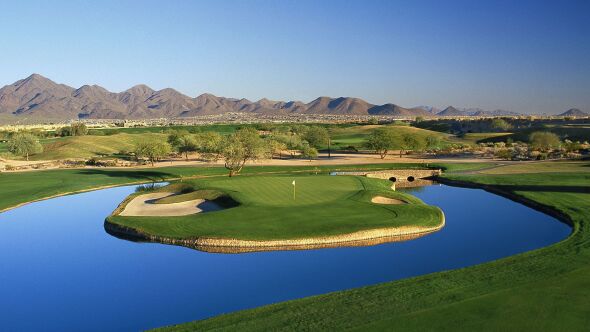 Galleries
Scottsdale's most scenic golf courses
Picking the most scenic courses in Scottsdale is an impossible task. Not because there's so few courses from which to pick. Because there's too many. With that said, here are some camera-ready classics.
11 Images 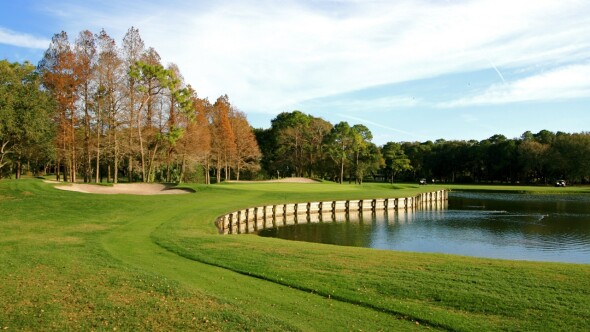 Articles
Reader asks: Best fall spa & golf getaways?
Spas and golf make up a great combination, and there's no shortage of them in the Tampa, Florida and Scottsdale, Arizona areas. Mike Bailey offers a few suggestions for a golf/spa getaway.
4 Min Read