The Devlin Course at Fairmont St. Andrews Resort plays like a champion 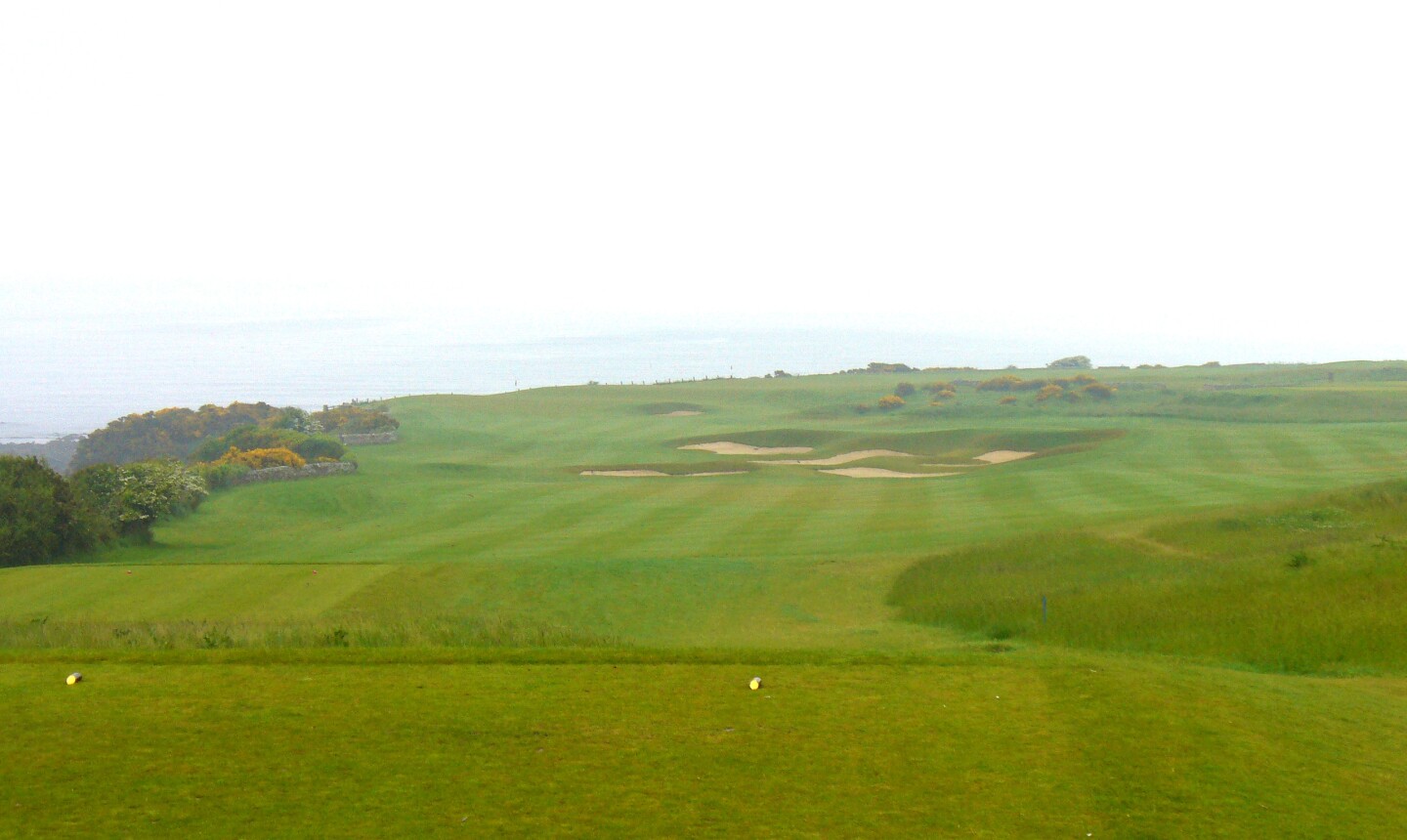 The seventh hole on the Devlin Course at the Fairmont St. Andrews offers one of the best tee shots on the course. Kiel Christianson/Golf Advisor 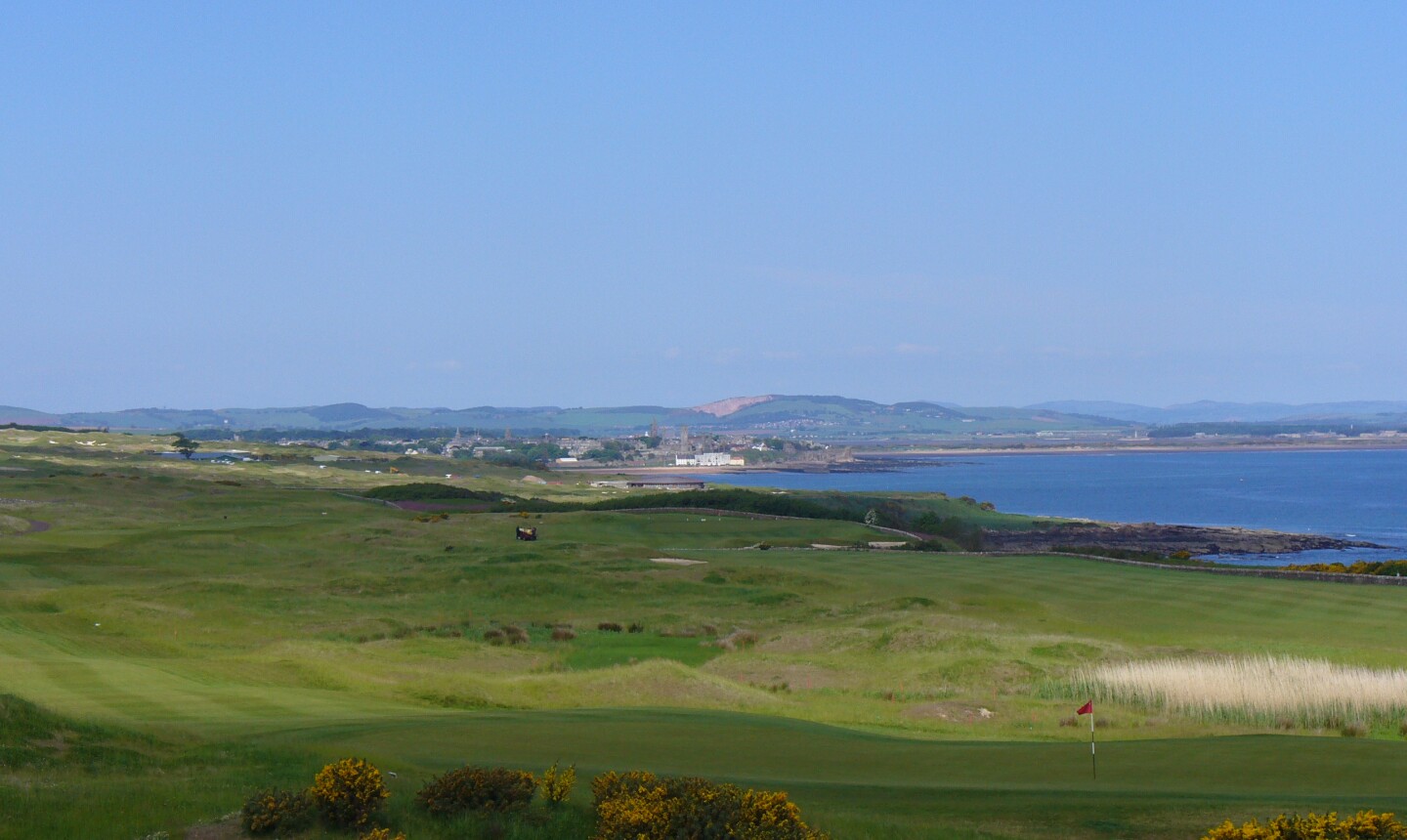 The 17th and 18th holes of the Devlin Course at Fairmont St. Andrews offer views of St. Andrews in the distance. Kiel Christianson/Golf Advisor 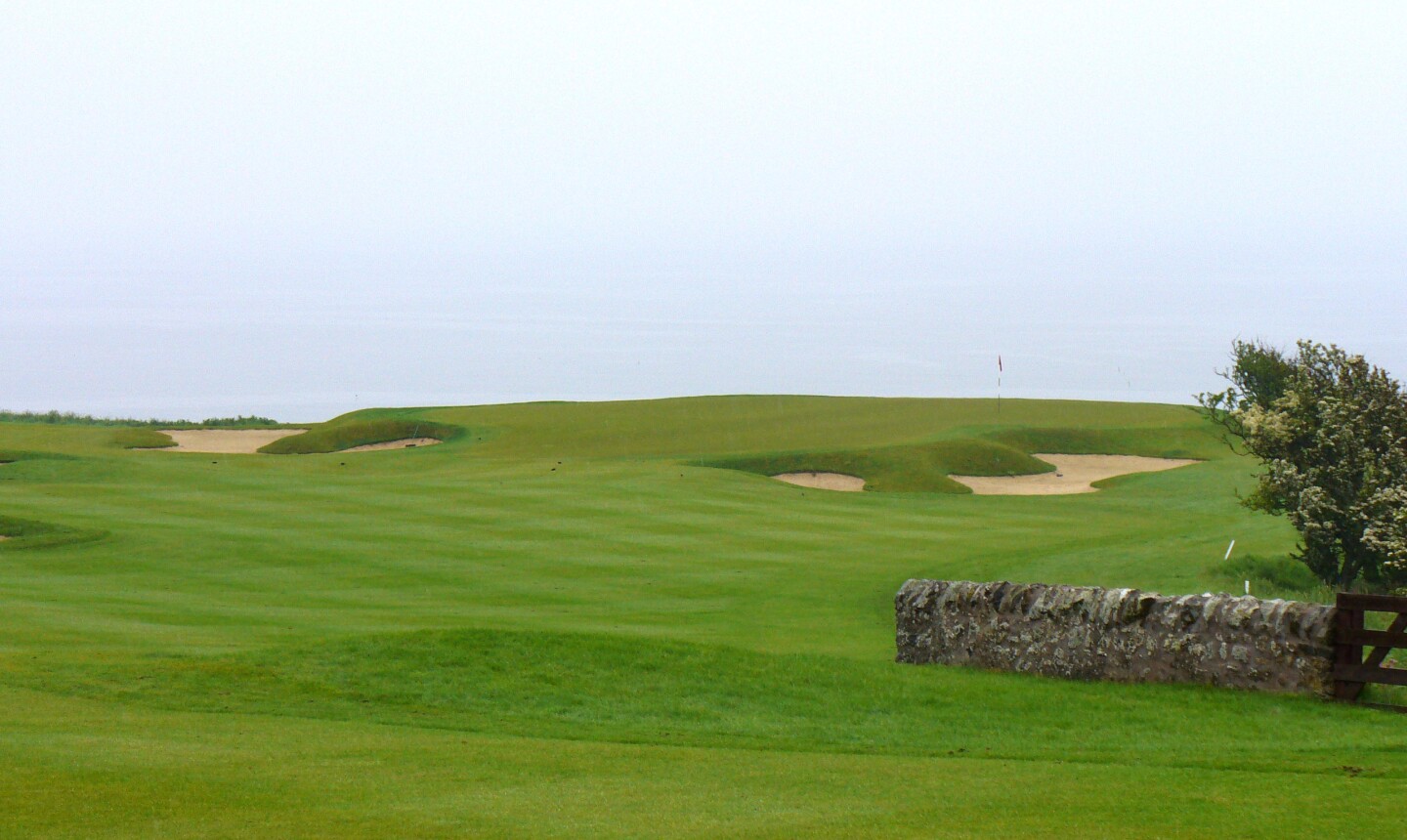 The approach on the 15th of the Devlin Course is gorgeous, but the tee shot leaves something to be desired. Kiel Christianson/Golf Advisor 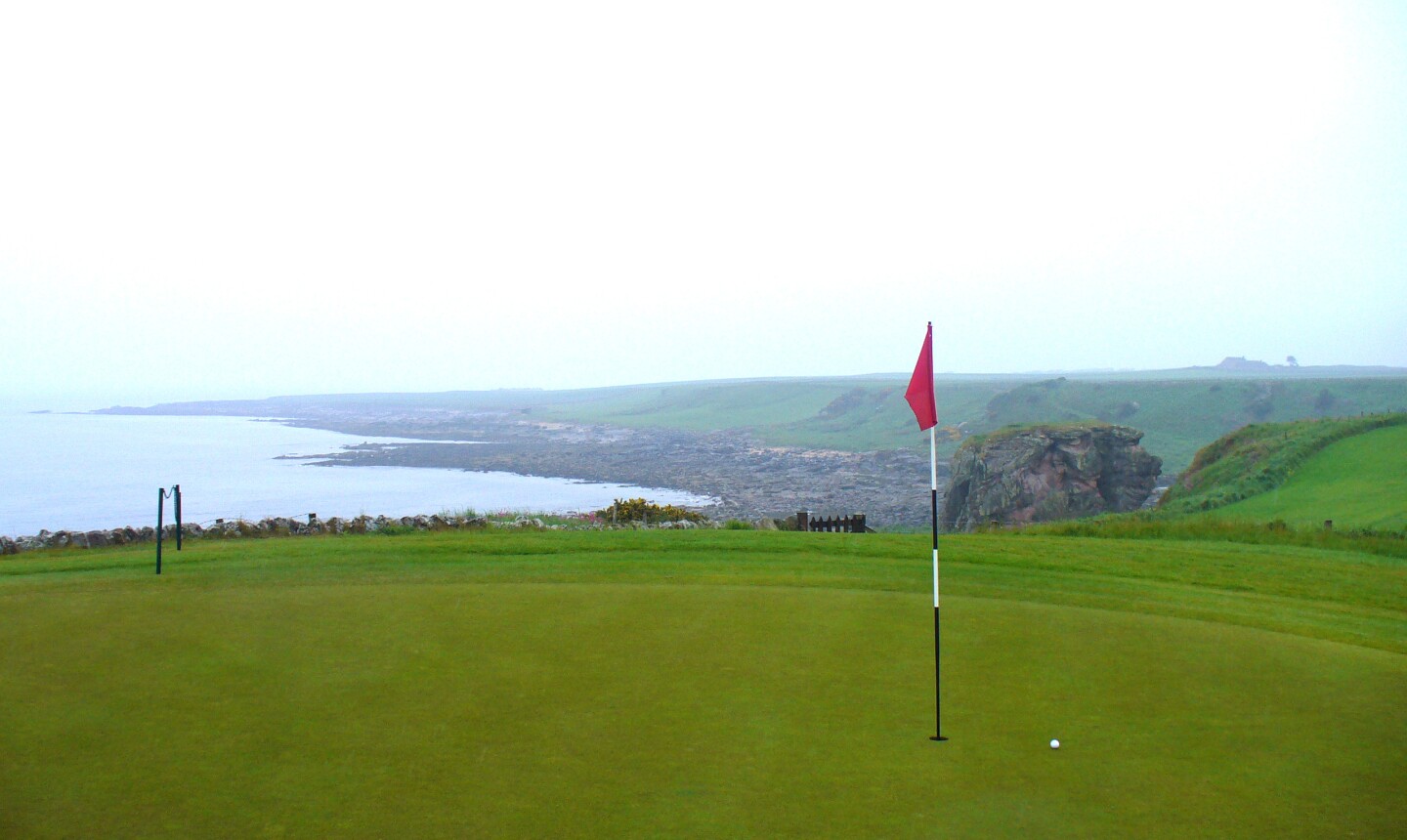 The view from the ninth green on the Devlin Course stretches all the way up the coast to Crail. Kiel Christianson/Golf Advisor

The Fairmont St. Andrews Devlin Course is a solid round of golf with exceptional greens and service.

ST. ANDREWS, Scotland - In 2001, the rather traditional town of St. Andrews, whose golf and tourism industry had experienced a bona fide explosion over the preceding decade, was further expanded as the St. Andrews Bay Resort opened just a few miles up the coast. American Dr. Donald Panoz enlisted the expertise of golfing great Gene Sarazen to realize his dream of a five-star luxury golf resort in the backyard of the famed Old Course.

Specifically, Panoz wanted to meld the history of St. Andrews, with panoramic cliff-top views of St. Andrews Bay, and merge the features of American resort golf with the allure of links golf. To that end, Panoz hired Ryder Cup Captain Sam Torrance and Australian great Bruce Devlin to design one course each on the expansive 540-acre site procured just outside of town. Anchoring the courses would be a $3.5 million clubhouse overlooking the sea, and an $80 million, 209-room resort and spa.

By all accounts, the clubhouse and resort are two of the very best in Europe, with service and amenities second to none. The courses, however, received mixed reviews. The main difficulty was the inherent incompatibility of certain American features with the site-specific demands of quasi-links golf. For example, Panoz wanted the courses to remain a verdant green year-round. As such, the basically flat farmland that was shaped into the courses was bulked up with richer, darker soil needed to sustain turf varieties that would not turn brown in the summer.

The result, however, was mushy tee boxes and some poorly-draining areas throughout the courses, and maintenance difficulties in nurturing non-optimal species of grasses.

Enter the Fairmont group, whose hotel and resort holdings from Manitoba to Monaco include some of the most opulent in the world. After a $20 million refurbishment of the hotel, and extensive (ongoing) renovation of the golf courses, Fairmont St. Andrews is poised to fulfill all of the incredible promise it has had since day one.

Both the Torrance and the Devlin courses, once completely renovated and reopened, will measure well over 7,000 yards from the championship tees. The Torrance is currently closed, but will re-open in 2009 in time to serve as the Final Qualifying Course for the 2010 British Open, which will be held at The Old Course at St. Andrews.

When the Torrance course re-opens, the Devlin will close for its renovation. Due to the overall renovation work, the Devlin is playing at 6,949 yards from the tips to a par of 70. The nice thing, however, is that none of the spectacular views nor the considerable challenge are affected by the ongoing work.

The day I visited the Devlin Course a steady rain was falling, but there was (thankfully) not a breath of wind. What struck me initially was that the layout looked so much like a links course, but felt different. During the round, one finds several greens that are receptive to aerial approaches, rather than the traditional links ground game (more prevalent on the Torrance Course). Consider the 448-yard 17th hole, where a deep gorse-filled ravine (Kittocks Den) snakes in front of the green from the right side, cutting off almost any chance of a run-up shot, or the 467-yard fourth, where a table-top green precludes any ground game at all.

In the true spirit of links golf, though, there are lots of tee choices, and an abundance of blind or semi-blind tee and approach shots. These features may be vexing to first-time visitors, especially considering that, during renovations, no yardage books are available.

Perhaps the obvious example of this rather frustrating characteristic is the 344-yard 10th. Here, players are faced with a 160-plus yard carry off the tee uphill over thick fescue, OB/ocean right, and three huge pot bunkers that look as if they are positioned right at the end of the fescue (they aren't, though). The uninitiated has absolutely no clue where to aim, or what to hit. It feels as if this hole was judged too easy, so it was tricked up quite unnaturally with the forced carry and contrived bunkers. (My advice: Don't play smart - bang a driver as far up toward the green as you can.)

Another irritating hole is the 445-yard 15th, where the fairway is completely blind from the tee, and one has to guess that the line is somewhere over a small bunker on the left side of the fairway, the last thing visible before the fairway disappears behind the hillside on the left. When I smashed a driver about two yards right of center of that trap, I thought I was golden. But after cresting the hill, my heart sank as I saw a long stone fence running along the sea cliff down the right-hand side of the fairway. My ball was nowhere to be found, and eventually I had to admit that my barely offline monster drive had carried across the fairway and out of bounds. Frankly, it was too good a shot to be so badly punished.

On the other hand, balancing out these two less savory holes are a solid dozen that present stunning views of the seashore all the way up to Crail in one direction, and the Auld Grey Toon itself in the other. A personal favorite is the 406-yard seventh, with its split fairway and massive sand bunkers, which runs downhill all the way to the edge of the sea cliff.

Another instantly memorable hole is the 438-yard ninth, with its fairway that heaves like waves on the sea during a squall and a back-right pin position that appears to drop straight off into St. Andrews Bay.

The verdict on the Fairmont St. Andrews Devlin Course

The Devlin Course - like the Torrance Course, and even neighbor Kingsbarns - suffers a bit from its "new" feeling in a place where people visit primarily to experience golf history. But the holes are generally solid, the greens are exceptional, and the service is impeccable.

If there is one weakness in the design, it is purely aesthetic: There are times when one speculates that somehow, the breath-taking views of the sea and St. Andrews and the coastline (and, on a clear day, even Carnoustie across the bay) could have been exploited to even better effect. One example is the 378-yard eighth, which, by itself, is a perfectly respectable hole; however, following the absolutely gorgeous seventh, the way the eighth turns back inland is a bit of a let-down.

This criticism seems almost like nit-picking, though, considering that the combination of golf and luxury at the resort can arguably be met by only one or two other destinations in all of Scotland (maybe Europe). And this would be true even if the resort were not located in the birthplace of golf. One of the best aspects is that the resort's courses are open to the public at very reasonable rates.

Although you really should not miss the 209-room resort, which boasts several gourmet restaurants, including the outstanding grill room in the clubhouse, with its $1 million, 180-degree vista out over the sea. The spa and recreation facilities are worth every single point on each of the five-stars the resort has earned, and, as alluded to, the location in the heart of the Kingdom of Fife's richest golf region cannot be beaten. Once the Fairmont group's planned refurbishments have been completed, they just might have to invent a six-star rating to do justice to the level of luxury - which was the plan from the start.

Guests at the resort may also book one of two 4,000-sq. ft., four-bedroom Manor Homes, if they want to feel even more at home during their stay. Both the Torrance and Devlin Courses will be back online together once again by 2011, after the Torrance serves as the Final Open Qualifying Course in 2010.

Kiel Christianson
Kiel Christianson has lived, worked, traveled and golfed extensively on three continents. As senior writer and equipment editor for WorldGolf.com, he has reviewed courses, resorts, and golf academies from California to Ireland, including his home course, Lake of the Woods G.C. in Mahomet, Illinois. Read his golf blog here.
0 Comments 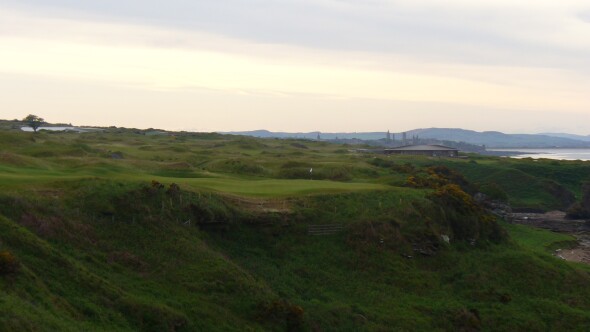 Articles
The Castle Course at St. Andrews: The "Home of Golf" receives a very modern addition
The Castle Course, designed by David McLay Kidd, is an intriguing and - dare we say it? - sexy addition to the six existing courses administered by The St. Andrews Links Trust. The course will leave many golfers utterly gob-smacked, whether it is by the panoramic cliff top views over St. Andrews, or the breathtaking vistas out over St. Andrews Bay, or, perhaps, by the vertigo-inducing greens.
6 Min Read

Articles
6 Min Read
The Castle Course at St. Andrews: The "Home of Golf" receives a very modern addition
The Castle Course, designed by David McLay Kidd, is an intriguing and - dare we say it? - sexy addition to the six existing courses administered by The St. Andrews Links Trust. The course will leave many golfers utterly gob-smacked, whether it is by the panoramic cliff top views over St. Andrews, or the breathtaking vistas out over St. Andrews Bay, or, perhaps, by the vertigo-inducing greens. 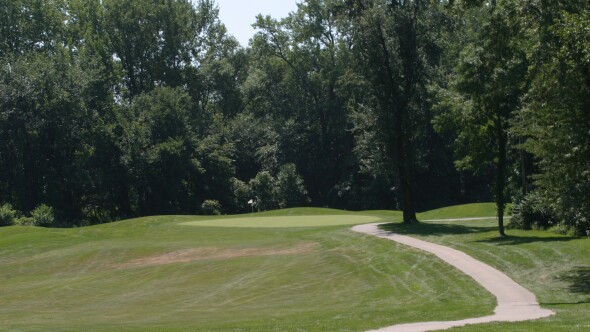 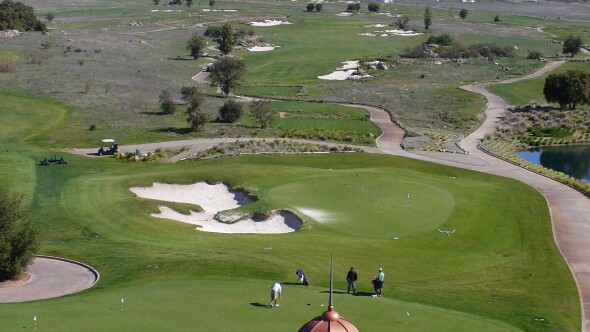