The real star at The Summit is the beauty of the landscape. Courtesy of Discovery Land 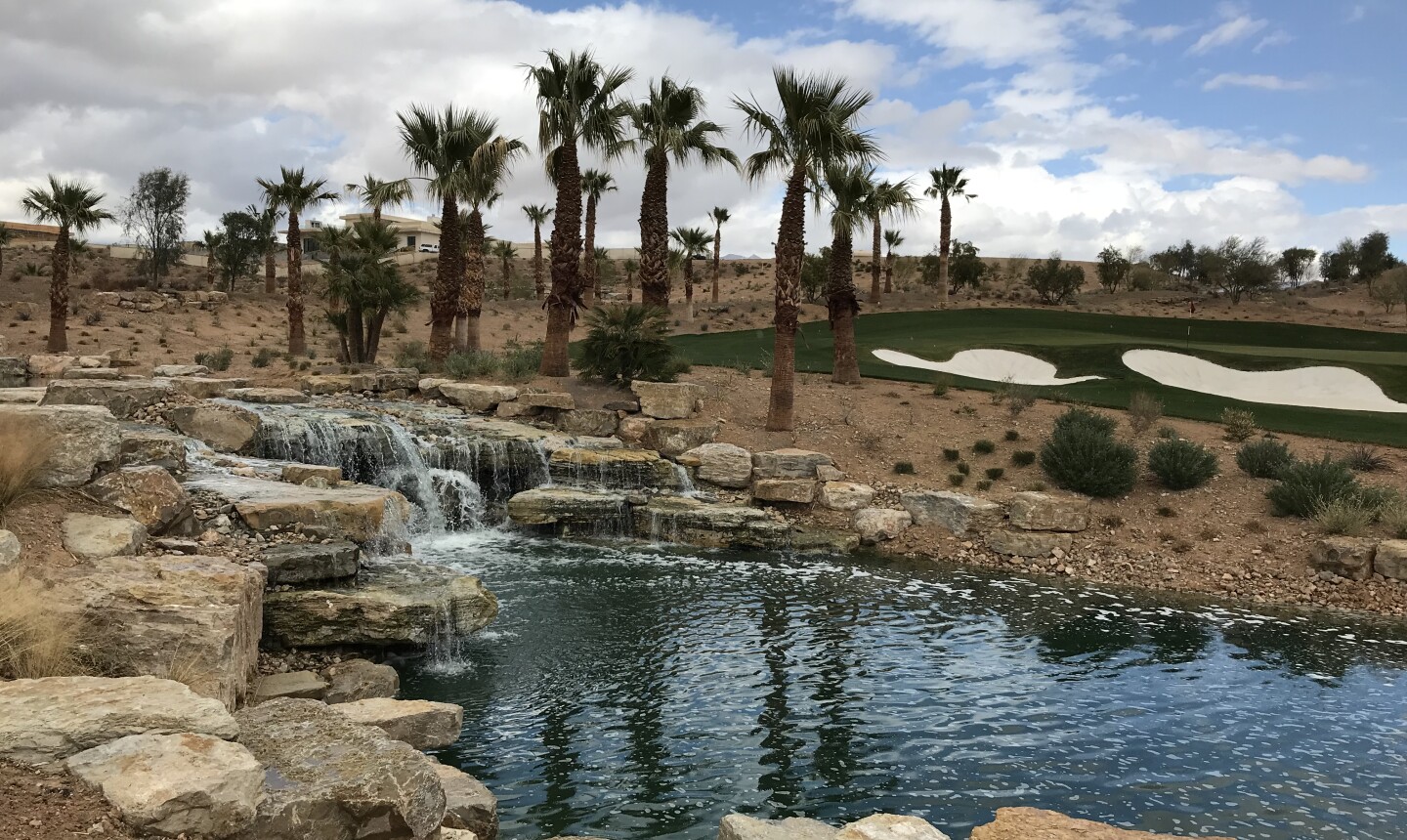 Intricate water features help make the Summit Club one of the most beautiful courses in Vegas. Mike Bailey/GolfPass 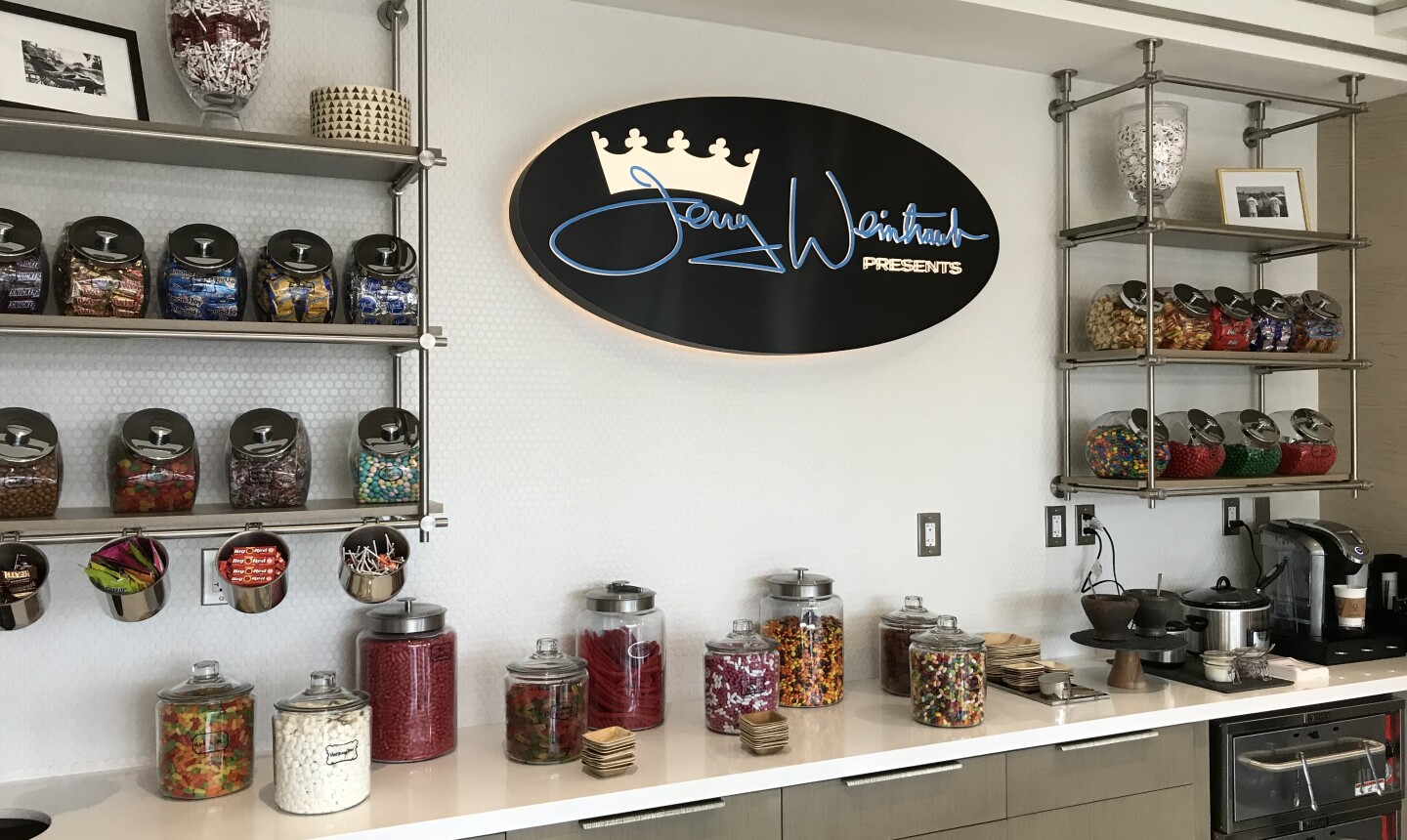 Halfway houses on golf courses don't get much better than Jerry Weintraub's at The Summit, where you can get gourmet meals and snacks at the turn. Mike Bailey/GolfPass 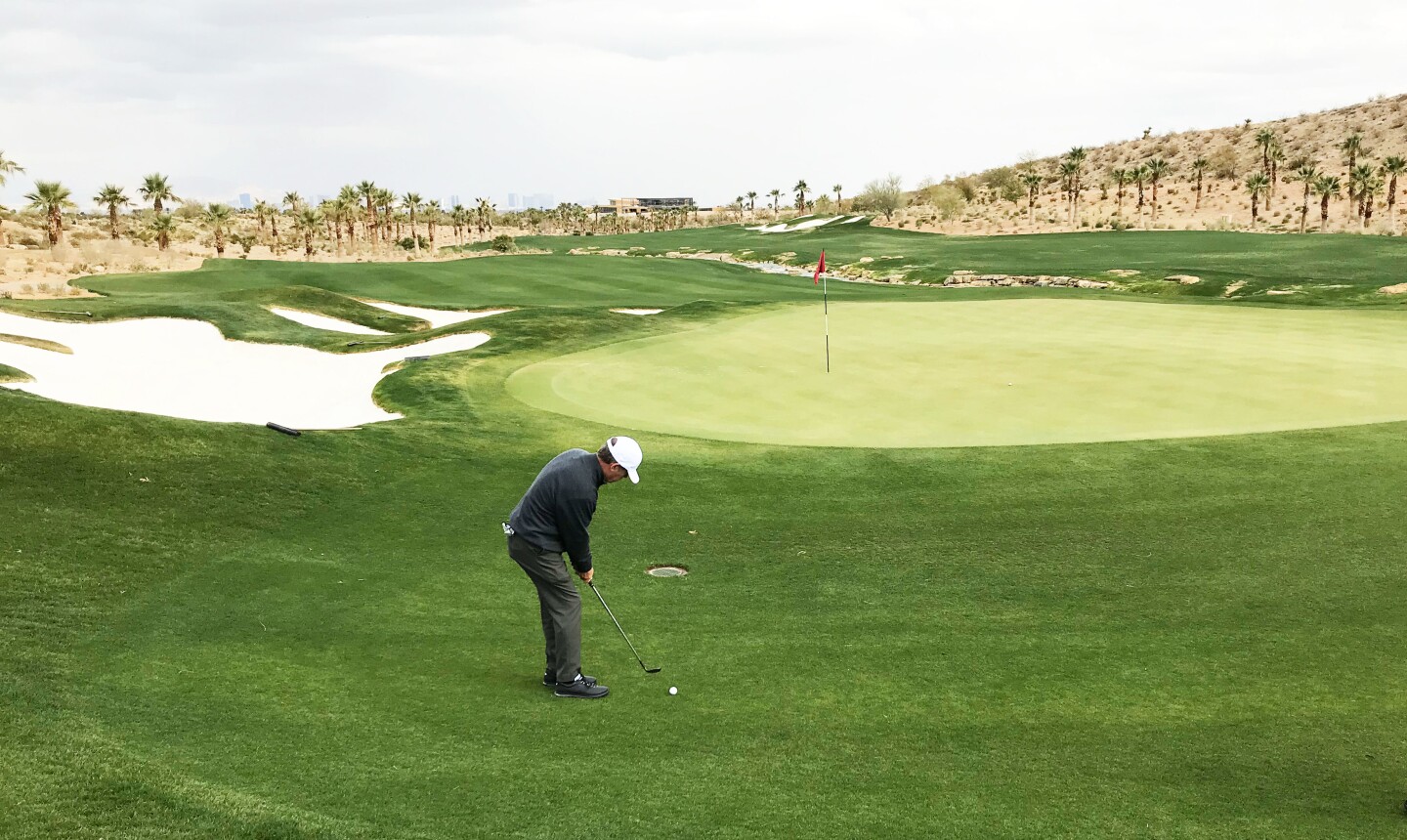 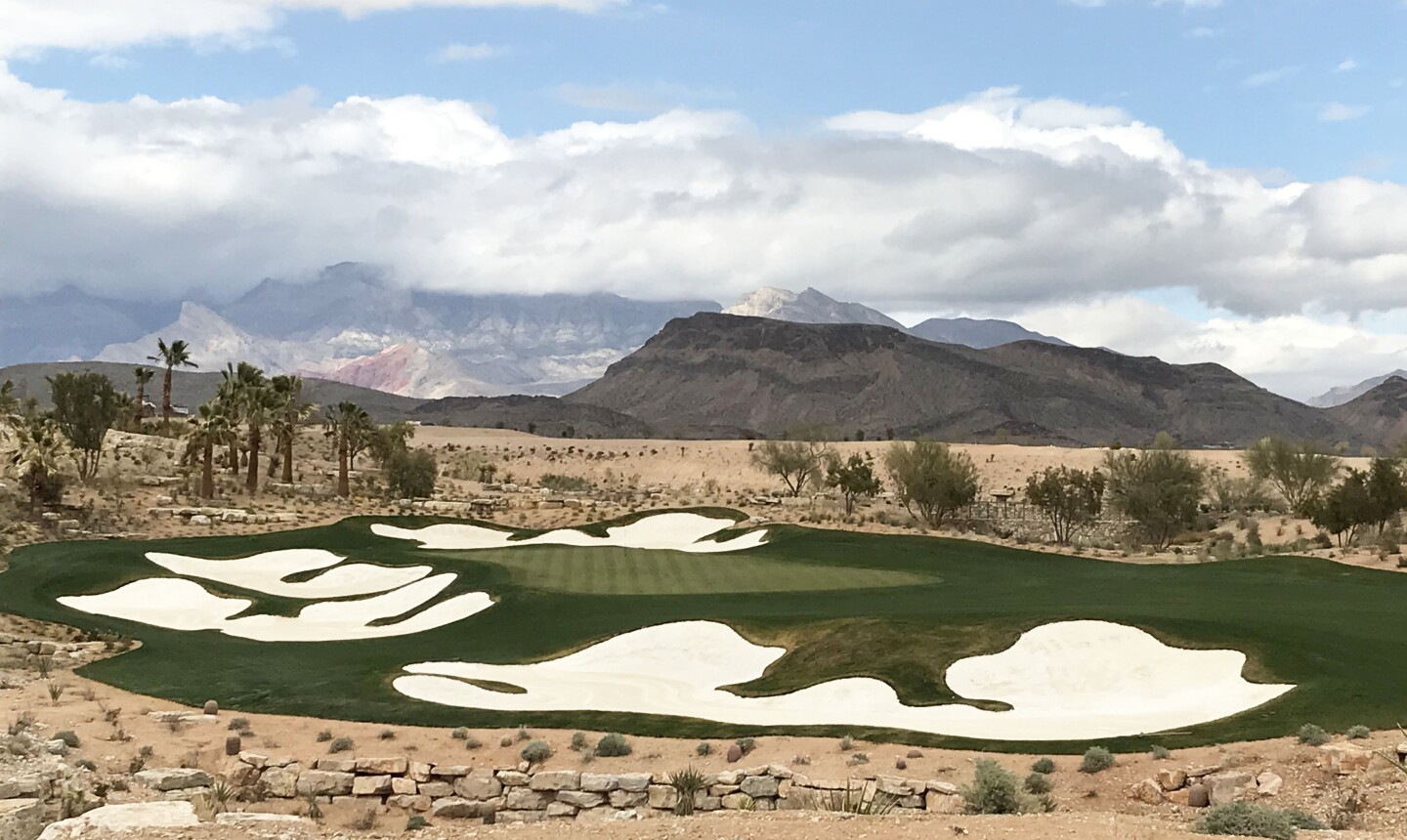 From the Tom Fazio-designed golf course, which opened in 2017, to all the extras on and around the course, this is a golf course community that will see to all its members' needs, laid out in arguably the best setting in the Vegas area. The Summit Club was developed by Discovery Land Co., which also counts the acclaimed Madison Club and The Hideaway in La Quinta Calif., in its portfolio. Opening initiation was $200,000.

Although you might not get to play this exclusive club, every golf fan will get the chance to see it during Golf Channel's coverage of the CJ Cup from 2-5 p.m. PDT Thursday-Sunday.

According to Discovery Chairman and CEO Mike Meldman, Las Vegas has been a market that was completely underserved for an upscale private club. The timing was right.

"Over the course of my 30 years in the business, exceptional pieces of developable land have become fewer, farther out and more constrained," Meldman was quoted as saying in an issue of the company's Discovery Life Magazine. "We considered Las Vegas more than 15 years ago when I first had an opportunity to look at this piece of property. This is truly unique."

According to a 2020 story in the Las Vegas Journal-Review, the 555-acre development has contracted 154 of its 260 lots, pre-built residences and clubhouse suites.

The Summit is already a special experience. Besides the golf course, there are all sorts of nice touches throughout, like an antique slot machine near the driving range. Put a dime in it, hit on a winning combination and it dispenses special Callaway Chrome Soft Truvis golf balls with The Summit's logo on them.

Originally, a couple of luxury Airstream trailers served as locker rooms, located outside the temporary clubhouse and golf shop, before a 7,000-square-foot golf house for dining was added. On the course, you'll find comfort stations that take comfort to a new level (think pints of Haagen-Dazs and just about any candy or snack you can imagine) plus a halfway house named for Mike Meldman's longtime friend and late actor Jerry Weintraub (who produced the movie "Ocean's Eleven") that you definitely want to stop at for a gourmet lunch. The beef-barley soup, peanut-butter-and-jelly-and-bacon sandwiches and beef sliders are incredible.

The icing on the cake might be the fact that The Summit Club hired one of the golf business's most respected professionals to oversee its golf operations. Paul Marchand, known nationally as Fred Couples' longtime coach and teammate at the University of Houston, is the club's director of golf. He came to Las Vegas in 2016 after 40 years in the Houston area, with his longest stints at Houston Country Club and Shadow Hawk Golf Club, two of the most prestigious clubs in Texas.

Fazio is certainly known for creating great tests of golf that not only excel in the strategy and aesthetics department, but also tend to be very playable as well. That's certainly the case with The Summit Club, which, unlike most Vegas golf courses, really isn't a desert course, but more parkland with a desert background. In other words, there's plenty of grass on this 7,457-yard layout.

There are also five sets of tees, meaning that it will appeal to a wide range of players. From the high handicapper and shorter hitters to the near-scratch players, everyone can play this golf course. From the forward tees – which measure just 5,023 yards -- many of the forced carries are removed, or you can at least play around them. From the back tees, it's certainly a championship test with elevated, sloping bentgrass greens, some long carries (like the 235-yard par-3 11th) and plenty of beautiful and sometimes foreboding bunkers.

From the elevated tees and greens there are numerous views of the city of Las Vegas below, particularly striking at sunset. On the other side are mountain peaks and mesas, and the reflections of Red Rock Canyon National Park, providing a stark contrast to the deep green turf and crystal white bunkers of this perfectly manicured golf course.

The holes are memorable, from the downhill tee shot on the par-4 first that eases you into the round, to the nice risk-reward par-5 18th hole that's rated as the no. 2 handicap hole on the course. Play the course once, and you'll remember all the holes the next time you visit.

And one more thing about the course: There's a par-3 19th hole that works into the practice area, next to where the clubhouse is planned. The extra hole is perfect for settling bets, of course, but it wouldn't be surprising if most players play it because they simply don't want the golf experience to end quite yet.

While the golf course is certainly the centerpiece, it's only the beginning. There will be hiking and biking trails, tennis courts and, of course, homes, many of them huge luxurious estates that are sure to be among the most lavish in the Las Vegas area. But the star of this development is the golf course around which these homes are being built.

The Summit Club's homes will truly be well out of play, perched high above the course in many cases, sharing the same views the golfers will see. In 2018 when this article originally published, homesites ranged from a little over a half acre to three acres and range in price from $3 million to $10 million. They've certainly gone up in value since the pandemic real estate boom. The homes themselves? Well, you can imagine what some of the members are going to build on these sites.

As for the area, Summerlin has been one of the hottest things going for quite some time. First developed by the Howard Hughes Corporation (the community was named for Hughes' grandmother, Jean Summerlin), the 40-square mile community started to take shape in the 1980s.

It's a city of more than 100,000 residents now, featuring a newly-planned downtown with dozens of shops and restaurants in an outdoor, pedestrian-friendly environment. And now with The Summit, there are three quality golf courses, including the also private TPC Summerlin, which hosts the PGA Tour's Shriner's Hopsital for Children Open on the PGA Tour, and the TPC Las Vegas, which is open to the public. Great golf, shopping, dining, parks and recreation -- what more does a community need?

I’m coming over from Scotland in a couple of weeks, is it possible to play this course? And if you can, can you rent clubs etc?

I'd write or call the club. It can't hurt, especially if you're a member at a club in Scotland. As for rental clubs, it wouldn't surprise me if they had something available (I know the pros there are on the Callaway staff), but again, just ask when you contact them. If rentals are not available at the club, there are companies that can loan you clubs while you're in the United States. Examples include GolfClubsAway, GolfRentalWorld, and ClubHub.