The Oaks golf course at Tan-Tar-A Resort in Missouri: A Lake of the Ozarks classic 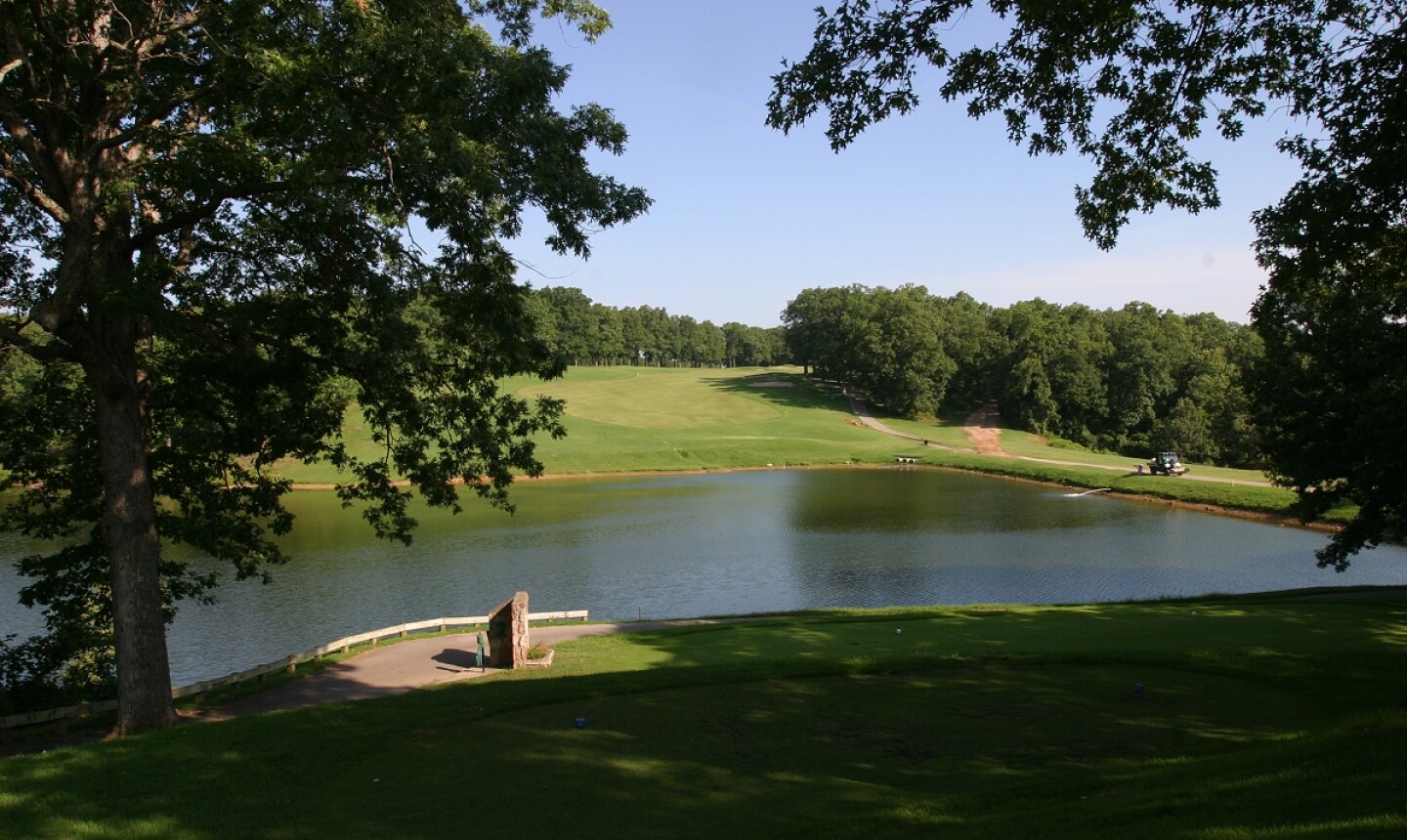 The tee shot at the 399-yard second hole at The Oaks at Tan-Tar-A Resort is one of the most daunting on the entire golf course. Andrew Hollingworth/Golf Advisor 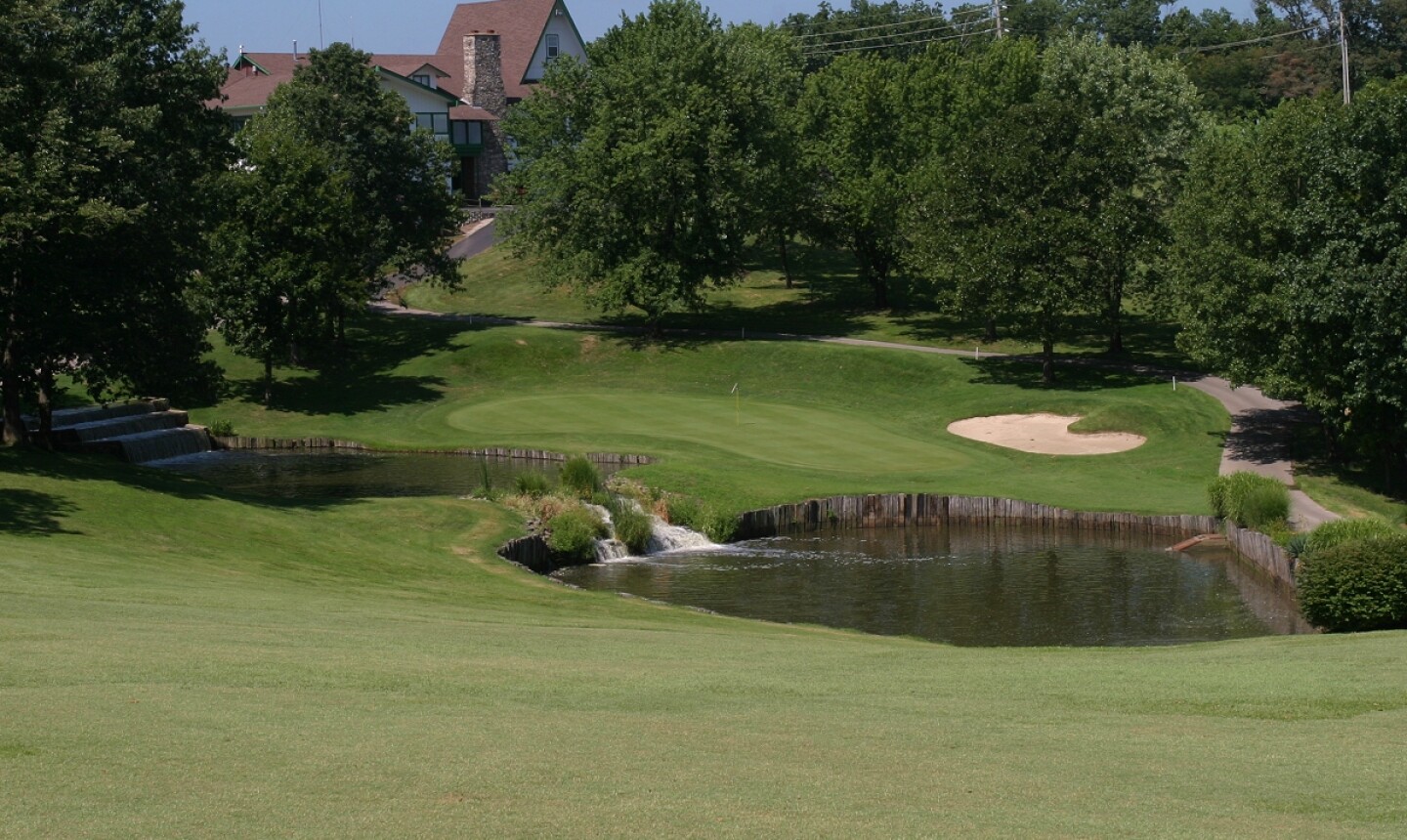 The approach to the green on the 528-yard ninth hole at The Oaks golf course at Tan-Tar-A Resort is picture perfect. Andrew Hollingworth/Golf Advisor 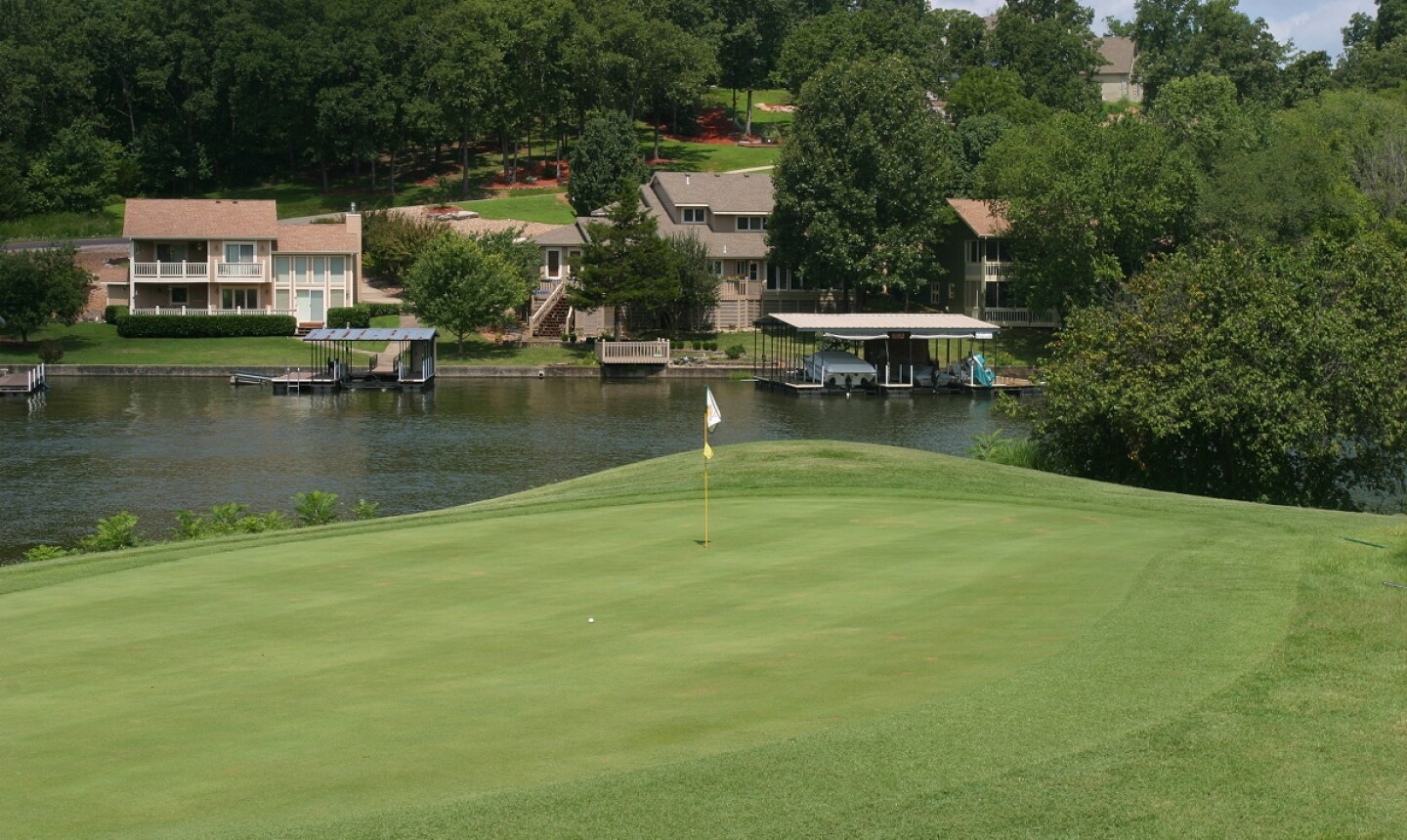 A marina provides the backdrop for the greens at the 177-yard 14 hole, shown here, and the 414-yard 13th on The Oaks golf course at Tan-Tar-A Resort. Andrew Hollingworth/Golf Advisor 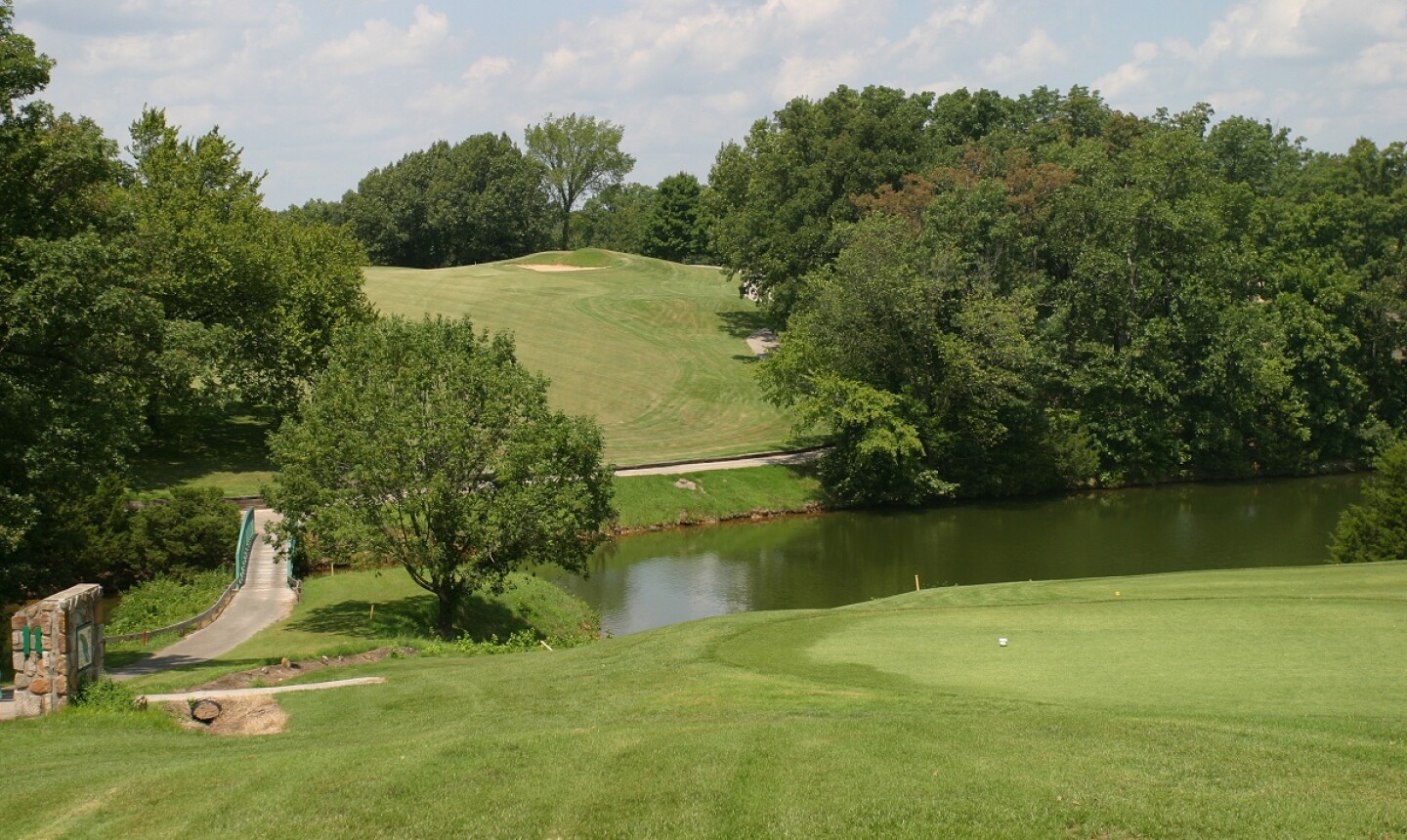 The tee shot on The Oaks at Tan-Tar-A Resort's 423-yard 18th hole might take a few rounds to master. Andrew Hollingworth/Golf Advisor

OSAGE BEACH, Mo. – The Lake of the Ozarks formed between 1929 and 1931 with the construction of the Bagnell Dam on the Osage River. Not long after the largest man-made lake in the Midwest came into being, vibrant tourism emerged along its shores. The first major vacation spot built on the lake, Tan-Tar-A Resort, turned 50 years old in 2010 and continues to go strong.

This year also marks the 30th anniversary of The Oaks at Tan-Tar-A Resort, making the Bruce Devlin and Robert Von Hagge design one of the most mature golf courses near Lake of the Ozarks.

The Oaks course, a par-71 layout, also rates as one of the most challenging, despite playing only 6,432 yards from the back tees. Dense woods, multiple water hazards and a near-complete lack of flat lies demand precision from tee to green.

How The Oaks at Tan-Tar-A Resort plays

"There are not a lot of level lies out there," Leahy said.

When you get to the 372-yard seventh, you'll see what he means: Standing in the middle of the fairway feels one of the banked turns at Talladega Superspeedway.

"There are also some nice elevation changes, and a few long drives between tee and green," Leahy said.

The latter feature makes for difficult walking. It is allowed, but greens fees include cart.

As with many golf courses around the Lake of the Ozarks, the yardage isn't intimidating -- just 6,003 yards from the middle and 5,317 from the forward tees. But unlike several other area tracks, The Oaks actually feels longer than the yardage would indicate.

Take, for example, the tee shot on the 399-yard, par-4 second, where, from the tips, golfers face a 180-yard carry over water to an uphill landing area bordered on both sides by thick trees. Even when a good drive hits the hill on the other side of the water, it stops dead -- or rolls backward -- to leave a blind, longish second shot to the green. That is, if you're not too far to the sides of the fairway and blocked by tree limbs.

Or check out the 423-yard, par-4 18th, on which the tee shot must carry a stream-filled ravine to the top of a hill that sits 10 to 20 feet higher than the tee box.

Throughout the golf course, the elevation changes make for lots of challenges and some memorable holes. The 365-yard fourth features a sharp elevation drop from tee to fairway, which runs into a water hazard. The second shot plays into a postcard-perfect green complex with water and a railroad-tie revetment to the right.

The approach into the green at the 528-yard, par-5 ninth ranks arguably as one of the prettiest shots on the lake. Players, depending on their drives and lay-up decisions, face anywhere from a 6-iron to a wedge shot some 40 feet down over two waterfalls to a small, kidney-shaped green.

The 414-yard 13th must be a local favorite, with its tight driving corridor into a fairway guarded on the right by trees and a babbling brook. A marina on the lake serves as backdrop to the slightly elevated green and makes the hole so visually pleasing that I almost forgot my anger at losing a ball in the aforementioned brook.

The Oaks at Tan-Tar-A Resort: The verdict

Like many of the 13 golf courses found around Lake of the Ozarks, The Oaks at Tan-Tar-A Resort is not overly long, but the dramatic elevation changes call for careful club choices and precise shot-making. The zoysia fairways and bentgrass greens appeared in generally good condition for my visit, though some hardpan patches existed around a couple greens and on the fairway edges. The greens on few of the holes -- like the 12th and 16th -- could be framed more attractively with bunkers or even flowerbeds.

As with all zoysia fairways, the ball seems teed up, making for good contact. But the Bermuda rough grew so lush it was possible to lose your ball while standing just a few inches from it. In fact, we found a dozen balls from previous groups nestled into the thick rough just off several fairways.

With rates topping out at just $55 during peak season, The Oaks is a highly recommended stop for golfers visiting the Lake of the Ozarks. Tan-Tar-A Resort includes 850 rooms, numerous shops, eating venues and recreational activities for guests and non-guest visitors.

Try the 90-minute Tropic Island Cruise. It costs $16 and provides an excellent and educational way to unwind after your round of golf. For more information, visit www.funlake.com. 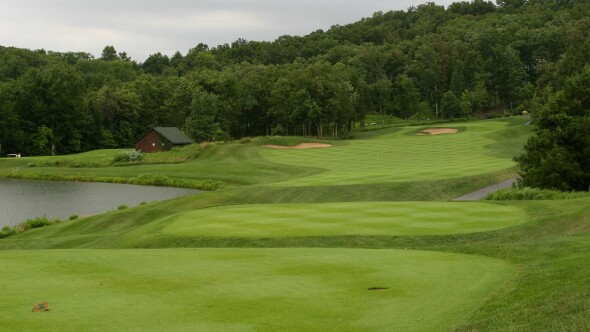 Articles
Lake of the Ozarks, Missouri: As many golf holes as fishin' holes
Lake of the Ozarks, Missouri is famous among anglers and boaters as an almost year-round mecca of aquatic fun. But golfers, especially in the Midwest, should consider it as an almost year-round golf destination, too. With some 15 courses dotting the countryside, there are as many golf holes to explore as there are fishing holes. And if non-golfing family members tag along, they'll have just as many off-course attractions to explore, Kiel Christianson writes.
5 Min Read 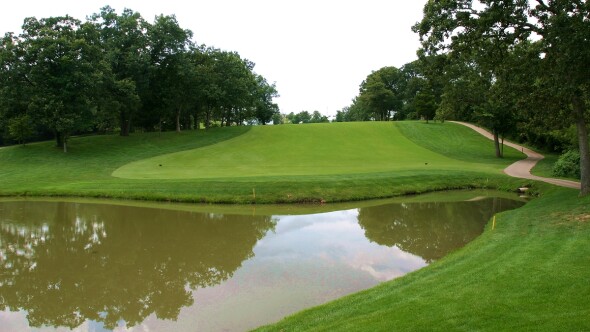 Articles
Bear Creek Valley Golf Club in Osage Beach, Mo.: The most underrated course on Lake of the Ozarks
There are more than a dozen golf courses at the Lake of the Ozarks in central Missouri, including several from famous designers, but the most underrated course around the lake may be Bear Creek Valley Golf Club. It may not have been designed by a famous name, but it has plenty of game, Kiel Christianson writes.
4 Min Read

Tim Gavrich
Senior Writer
Now Reading
The Oaks golf course at Tan-Tar-A Resort in Missouri: A Lake of the Ozarks classic
Search Near Me