The Ocean Club on Paradise Island in the Bahamas: Sometimes, the name says it all 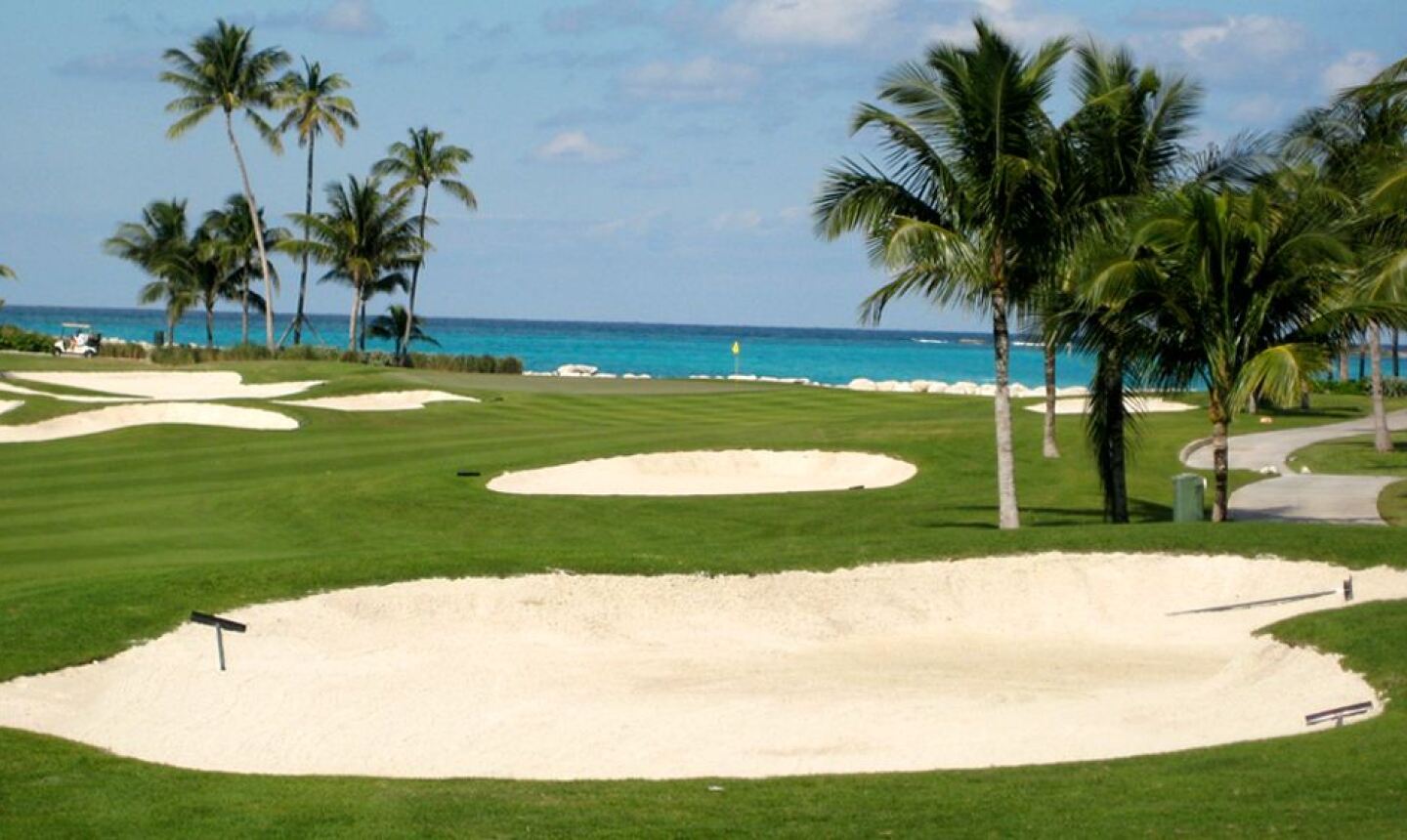 The Ocean Club's sixth hole is a 552-yarder flanked by bunkers from almost every angle. Wes Gilbertson/Golf Advisor 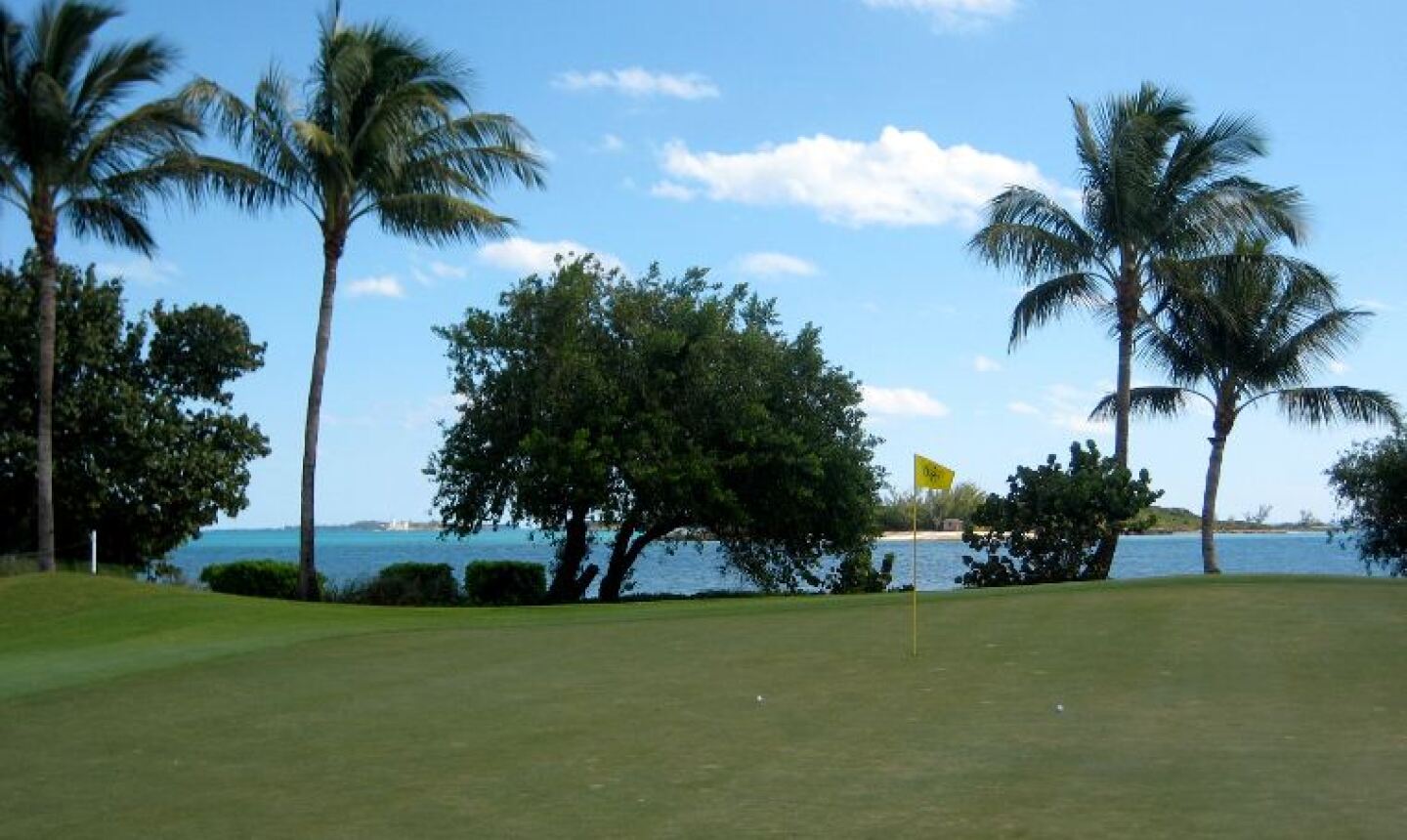 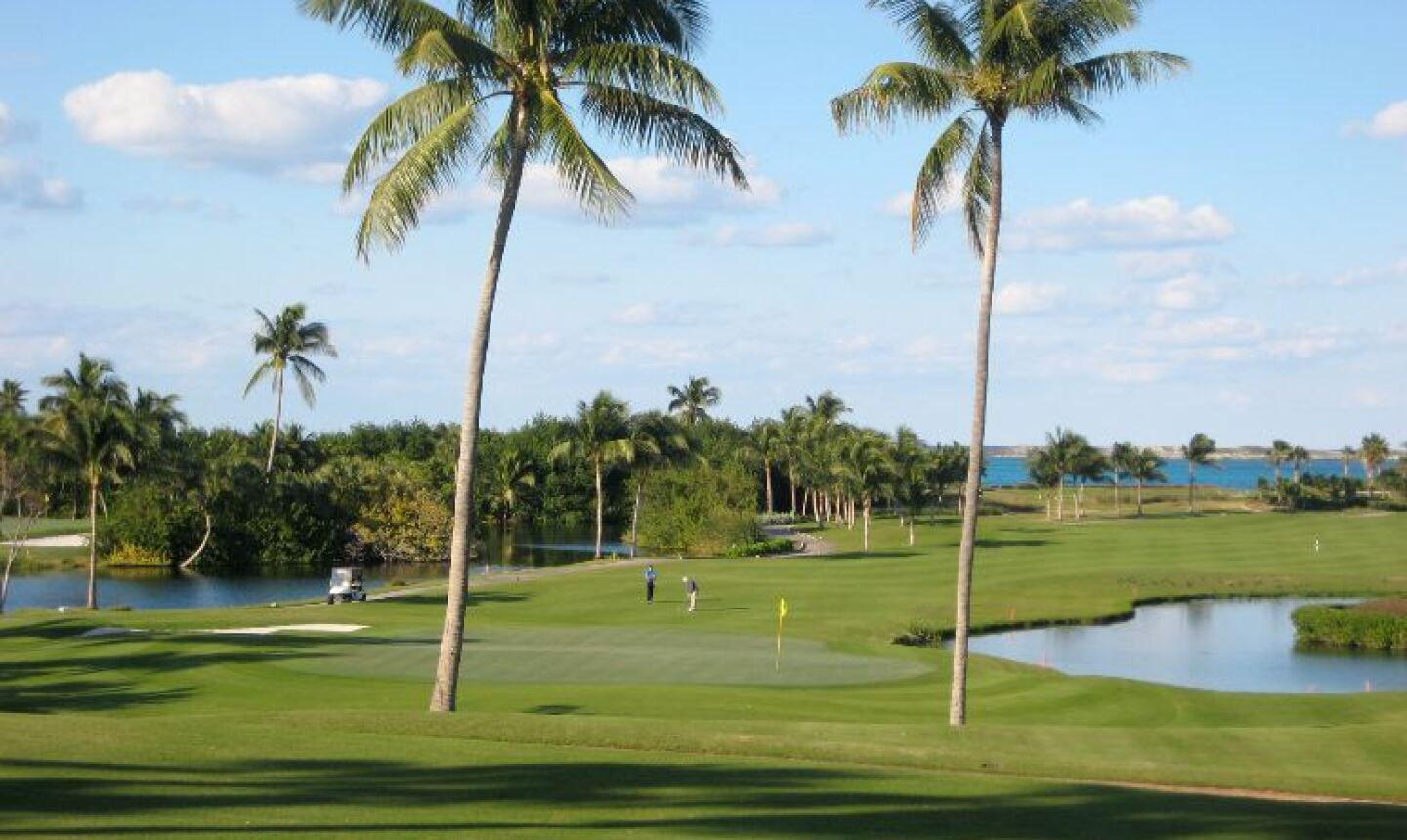 The Tom Weiskopf-designed Ocean Club is considered one of the best golf courses in the Bahamas. Wes Gilbertson/Golf Advisor 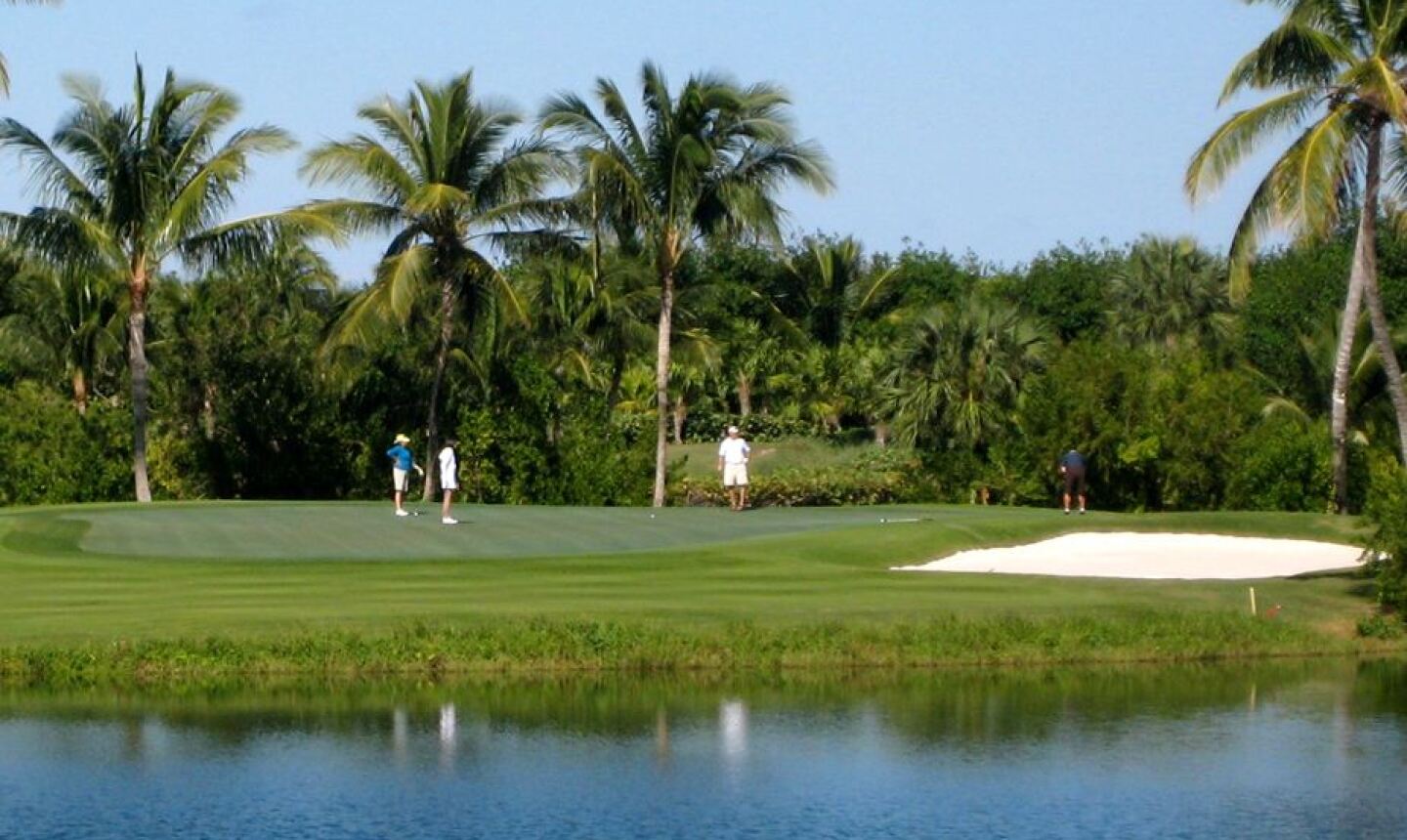 The 12th hole at the Ocean Club at Paradise Island in the Bahamas. Wes Gilbertson/Golf Advisor

PARADISE ISLAND, Bahamas -- It's a little slice of paradise. Literally.

And even your slice -- or hook, or whatever you call it -- should look spectacular in this setting.

Considered one of the best golf courses in the Bahamas, the Tom Weiskopf-designed Ocean Club sits on a sliver of lush land known as Paradise Island.

"To me, it's probably the most scenic golf course I've ever seen," said Mike Simms, who has a couple of high-end private facilities listed on his resume and is now director of instruction at the Ocean Club.

"Right when you get off the shuttle bus, you walk past the pro shop and you see that panoramic view of the entire golf course, and I don't think you can see that kind of view anywhere else. There's nothing like it."

Pretentious as it might sound, Paradise Island actually lives up to its lofty billing.

The main attraction is the Atlantis, a Las Vegas-like resort complete with a water park, dolphin cay and shark aquarium. Connected by bridge to the Bahamian capital of Nassau, Paradise Island is also home to the posh One & Only Ocean Club Luxury Resort. Unless you're a member, you'll need to be staying at one of these joints to score a tee time.

The golf course also lives up to its name.

Unlike some oceanside setups that are perched on the cliffs high above the water, this 7,159-yard track sits at sea level. You can catch a glimpse of the turquoise water from the clubhouse, the practice facility and most of the holes. If your view is obstructed, you're probably staring into the backyard of one of the multi-millionaires with a mansion overlooking these well-manicured fairways.

Celebrity golfers at the Ocean Club

You might see some A-listers on the links, too. For a decade, the Ocean Club hosted the Michael Jordan Celebrity Invitational. Although Jordan now hosts his annual fundraising event elsewhere, actor Michael Douglas has started another high-profile tourney under the palm trees on Paradise Island. PGA Tour star Ernie Els knows his way around the neighborhood and currently owns the course record.

If just a view of the water isn't enough to get your heart pounding, there are also a few opportunities to lose a ball in the salty hazard at the Ocean Club.

There's the 456-yard fourth hole, where the water creeps toward the right edge of the dance floor at high tide, creating a green surround that seems better suited for flip-flops than flop shots.

The same goes for the sixth hole, a 552-yard assignment flanked by bunkers from almost every angle. Send your approach shot sailing past the target and you might be attempting a sand save from a thin strip of beach that separates the golf course from the Atlantic.

Easily the most intimidating look on the course is from the tees at No. 17. Nicknamed Pintail Crossing, the 281-yard hole runs parallel to the ocean and dares the heavy hitters to take a shortcut over the beach with aspirations of an eagle putt. The risk, of course, is watching your drive splash into the water.

Then again, you couldn't find a much better resting place for a golf ball. Just tell your buddies it was lost in paradise.

"There is some challenge to it. I've made a two on that hole and I've admittedly made a nine on that hole," Simms said. "If you take that chance, you might pay the price or you might get rewarded. That brings the drama, and I think it heightens the golf course."

The Ocean Club is the host course for Big Break Atlantis, the 17th season of Golf Channel's popular reality series, which debuts May 14 at 9 p.m. ET. Big Break Atlantis will showcase a field of 12 women at different stages of their golf careers. One contestant will be eliminated each week, with the last player standing awarded her Big Break, a once-in-a-lifetime opportunity to compete in an LPGA Tour event.

Simms said the key to success will be the ability to handle the wind.

The Ocean Club: The verdict

You certainly won't leave wondering why they call it the "Ocean Club." You probably won't dispute the "Paradise Island" part, either.

This isn't a golf destination as much as a vacation hotspot that just so happens to have a championship-caliber golf course to go with its beautiful beaches and array of water activities. A lot of guests arrive at the pro-shop with only a camera and a canister of sunscreen, needing rental clubs and a four-and-a-half hour break from the poolside scene.

What you'll find at the Ocean Club is a postcard-like setting and a challenging layout, although not so tough that you'll wish you were swimming instead. It's also an easy walk, so you can make one more trip to the buffet line the night before. You are, after all, on vacation.

Kira K. Dixon
Lifestyle Correspondent
Now Reading
The Ocean Club on Paradise Island in the Bahamas: Sometimes, the name says it all
New Cookie Policy
WE AND OUR PARTNERS USE COOKIES ON THIS SITE TO IMPROVE OUR SERVICE, PERFORM ANALYTICS, PERSONALIZE ADVERTISING, MEASURE ADVERTISING PERFORMANCE, AND REMEMBER WEBSITE PREFERENCES. BY USING THE SITE, YOU CONSENT TO THESE COOKIES. FOR MORE INFORMATION ON COOKIES INCLUDING HOW TO MANAGE YOUR CONSENT VISIT OUR COOKIE POLICY.
CONTINUE
Search Near Me