Water-logged: You will get wet at scenic River Ridge Golf and C.C. in Edmonton, Alberta 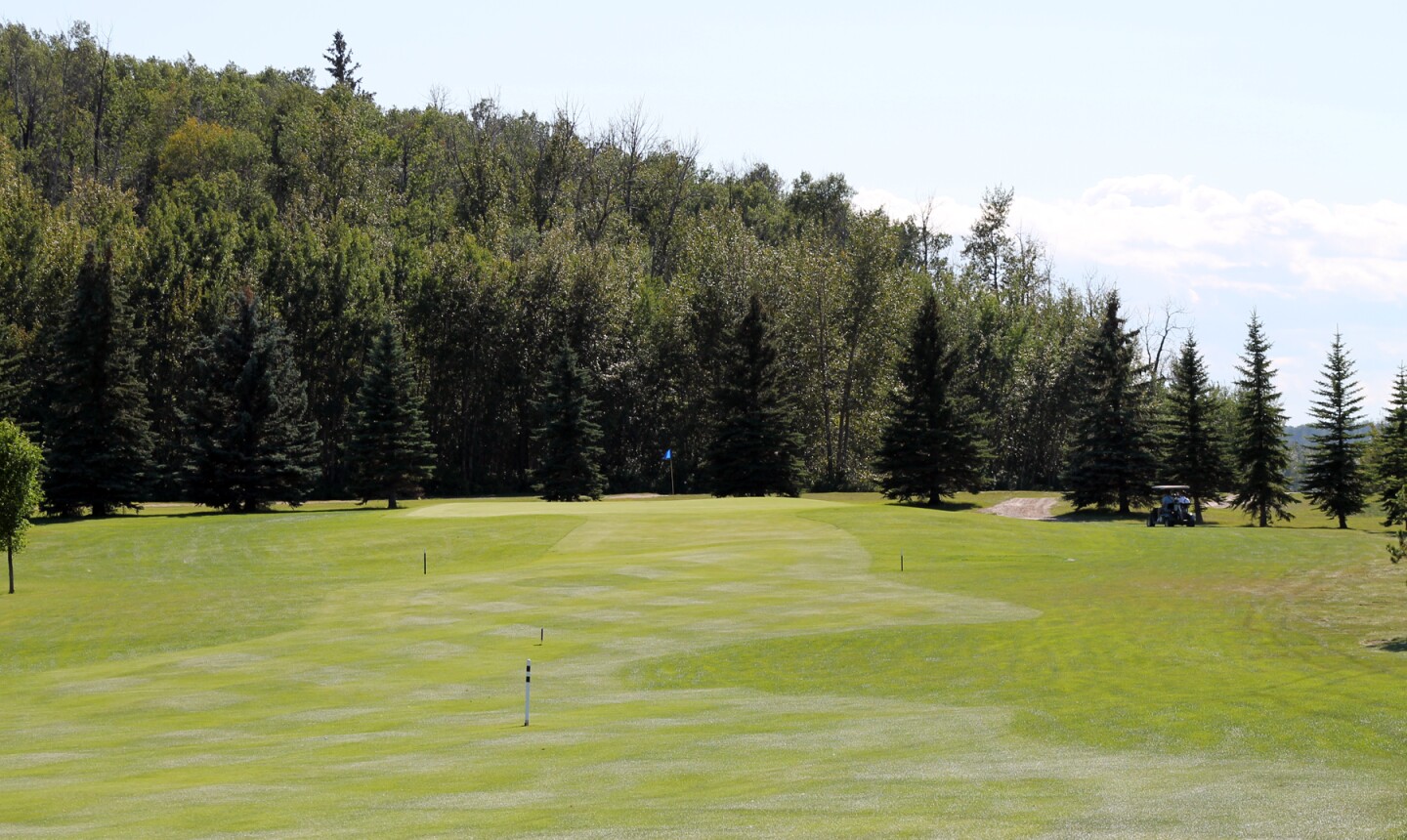 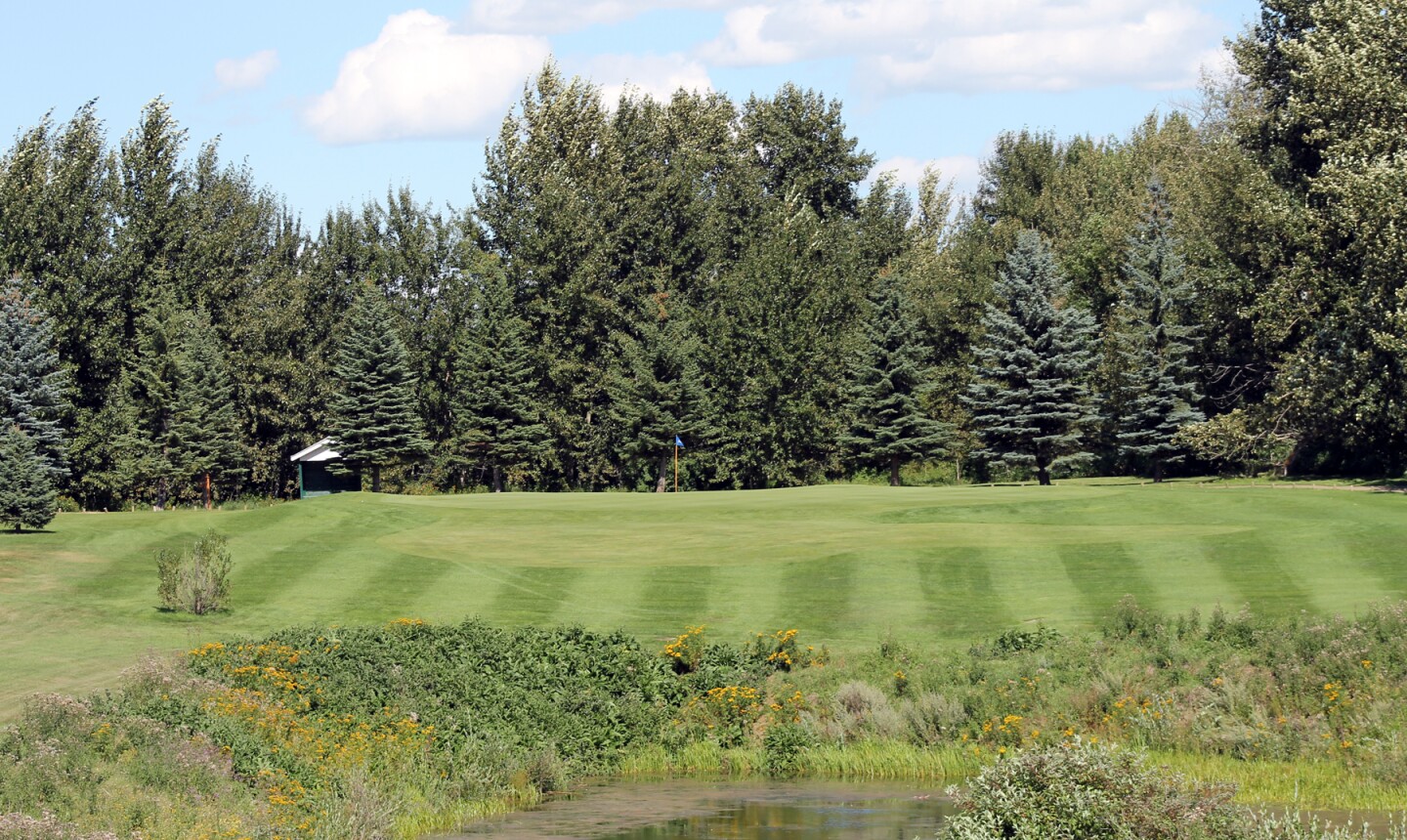 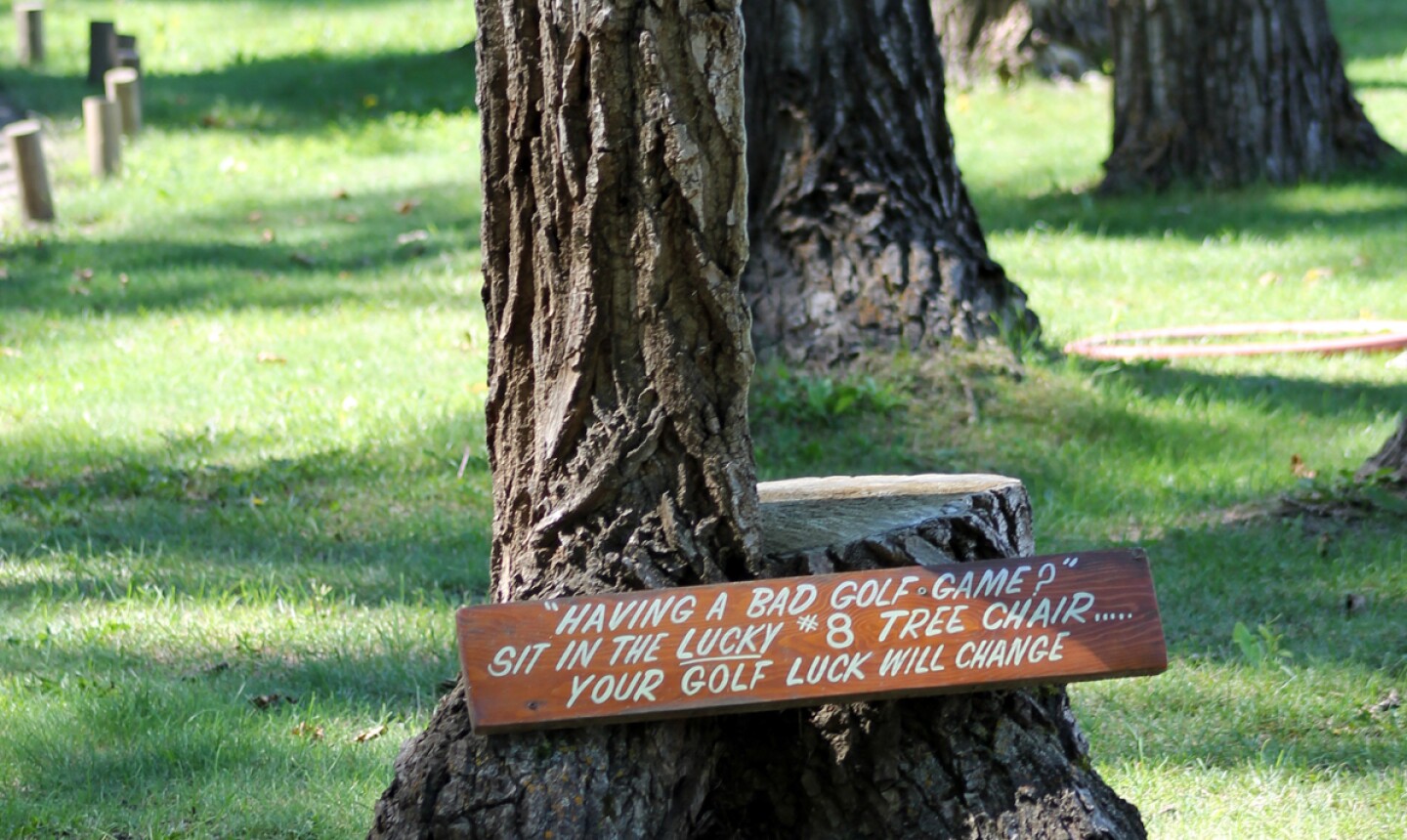 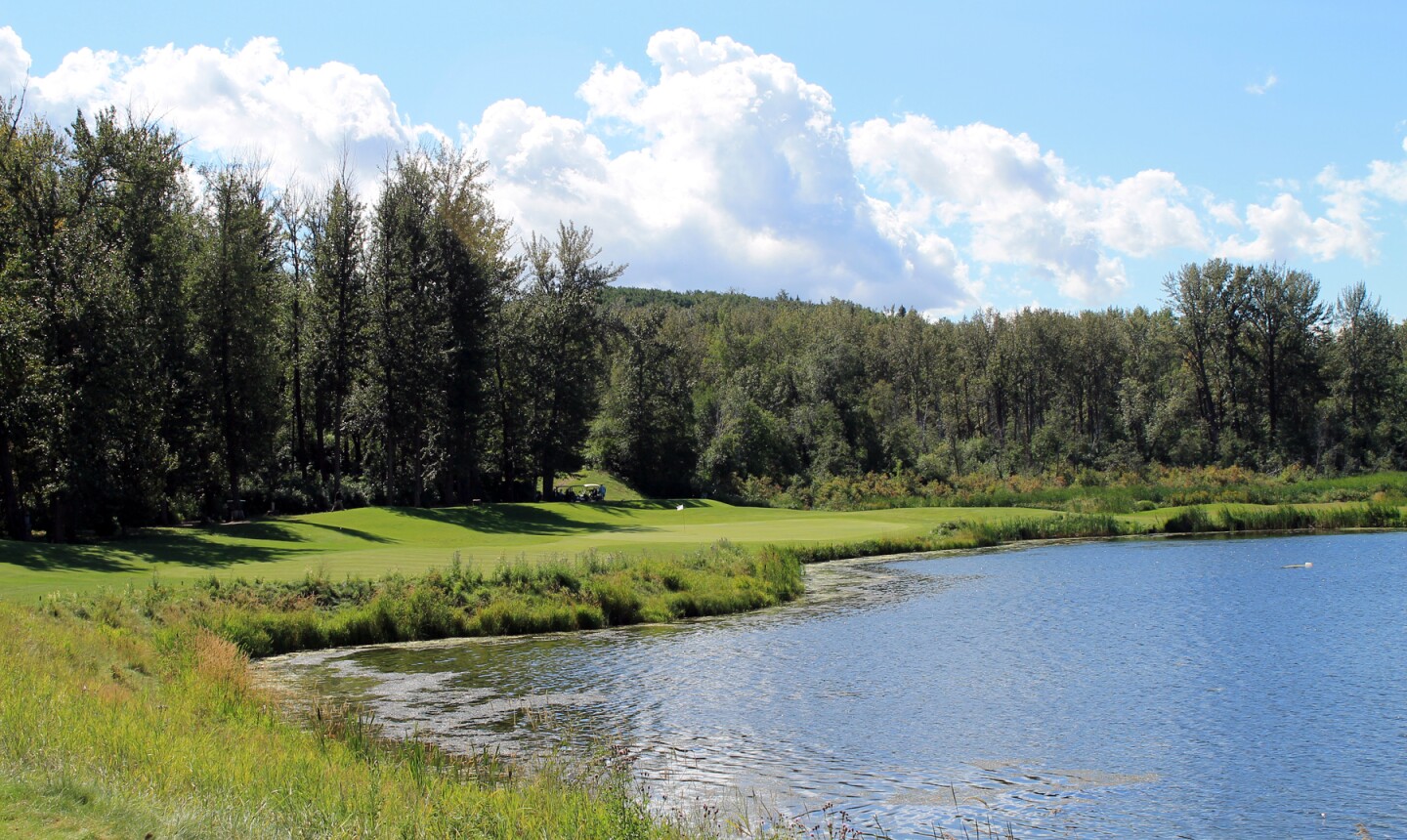 Water -- such as on no. 8 -- is a common sight on River Ridge Golf and Country Club. Wes Gilbertson/Golf Advisor 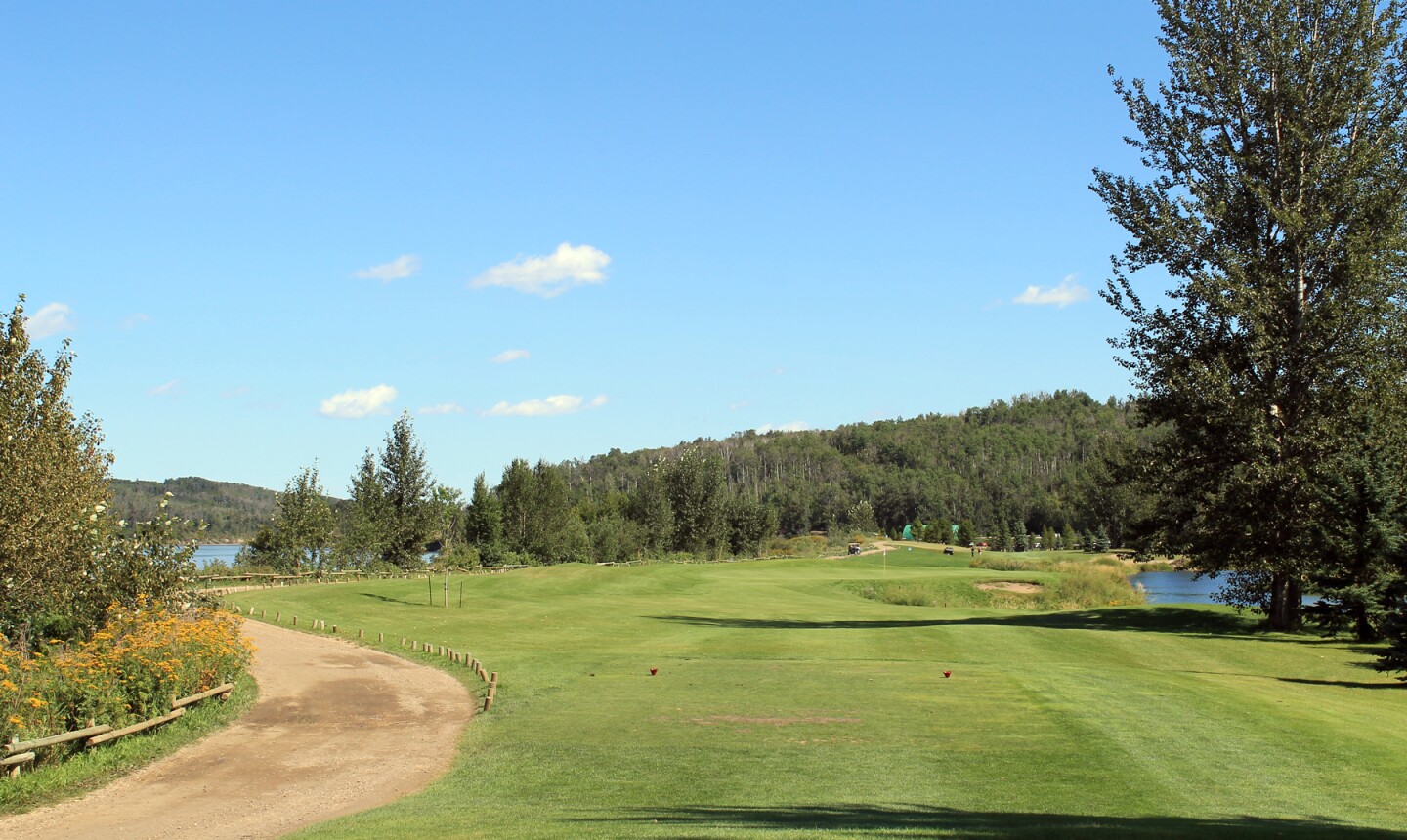 There's lots of room to play on wife-open no. 5 on River Ridge Golf and C.C. Wes Gilbertson/Golf Advisor 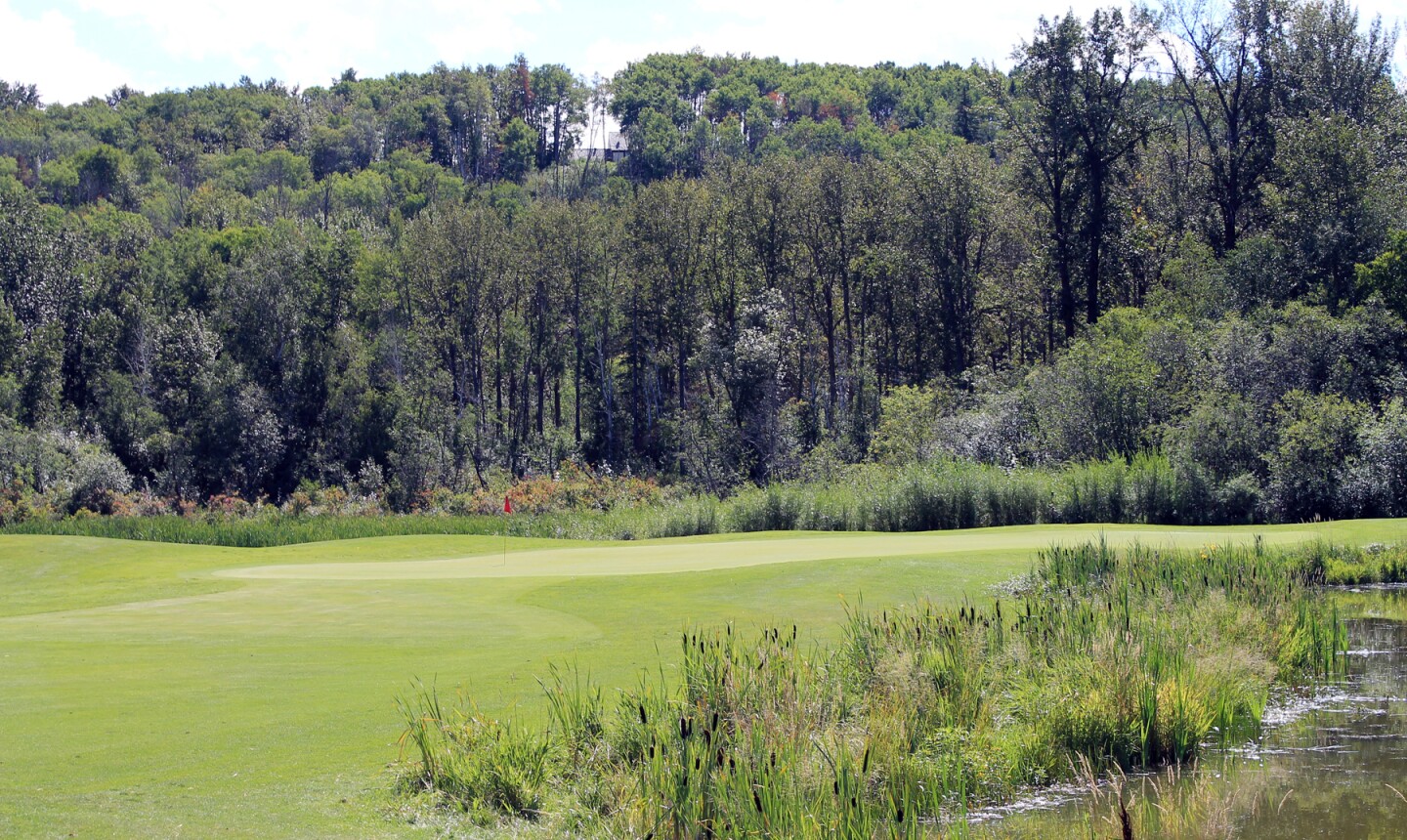 EDMONTON, Alberta, Canada -- Well, it's worth a try.

For years, golfers have retreated to bar-room stools to bemoan their crummy lucky.

At River Ridge Golf and Country Club in Edmonton, there's an alternative. Arrive at the putting surface at the 185-yard eighth hole, you'll find a seat carved into a thick tree trunk with a wooden sign that reads: "HAVING A BAD GOLF GAME? SIT IN THE LUCKY #8 TREE CHAIR ... YOUR GOLF LUCK WILL CHANGE."

And you thought you had already tried everything ...

"That tree was felled in a gigantic wind-storm that came through, and then, as we were cleaning it up, one of our longtime grounds-crew guys was feeling a little bit creative that day and made a chair out of it and put a sign up," explained Brett Prosser, the head professional at River Ridge. "It was kind of a joke, but it just stuck, and it's been here ever since. You can catch people sitting out there. Not many like to admit they do, but by hole 8, there are a few people looking for a luck change."

If you don't have luck on your side, you might want to bring an extra sleeve of golf balls for your round at River Ridge, which is located on the banks of the North Saskatchewan River on the southwest outskirts of Alberta's capital city, about a 20-minute drive from Edmonton International Airport and 15 minutes away from world-famous West Edmonton Mall.

Although the river is just eye-candy for a handful of holes and never really in play, there are water hazards lurking on 13 of 18 assignments at the 6,620-yard layout, including eight before the turn.

The front nine at River Ridge, one of three Edmonton-area golf courses operated by Country Club Tour Golf Group (with another about an hour away in Wetaskiwin, Alberta), was ripped up in the mid-2000s, with only one hole untouched in a major renovation.

"It was a much-needed re-do. The old nine was quite a poor golf course. We do fight the stigma of how bad it was, still," Prosser said. "There was a whole bunch of tiny, water-surrounded, turtle-back greens. Those are gone now."

Gone, but certainly not missed

"Easily once a day we get someone that will come back and say, 'I haven't been here for 10 years, and this place is really, really nice with all the improvements you've made,'" Prosser said. "Basically, the consensus is, 'We're glad our buddies talked us into coming back.'"

River Ridge is about half the price of some of the top public golf courses in Edmonton, and it's not often you'll find such an inexpensive course on such a scenic piece of property.

A testament to the quality of the land, River Ridge's next-door neighbor is Windermere Golf & Country Club, one of the finest private facilities in Alberta.

The water-logged layout at River Ridge can serve up a mix of fun and frustration, but it should be an easy to spot relax regardless of your score. If not for a long-distance glimpse of always-busy Anthony Henday Drive from the back nine, you might forget you are teeing it up in a city that is home to nearly a million people.

"It's quiet. There's no city anywhere. There's no houses on the course. There's no anything, really. It's just a nice secluded place down by the river valley," Prosser said. "The loudest thing you hear is the occasional jet boat going down the North Saskatchewan, doing some fishing or something."

River Ridge has a full driving range and practice facility and instruction is available.

Sandpiper Golf and Country Club in Sturgeon County, Alberta saves the best for last
More from the author

Tim Gavrich
Senior Writer
Now Reading
Water-logged: You will get wet at scenic River Ridge Golf and C.C. in Edmonton, Alberta
Search Near Me