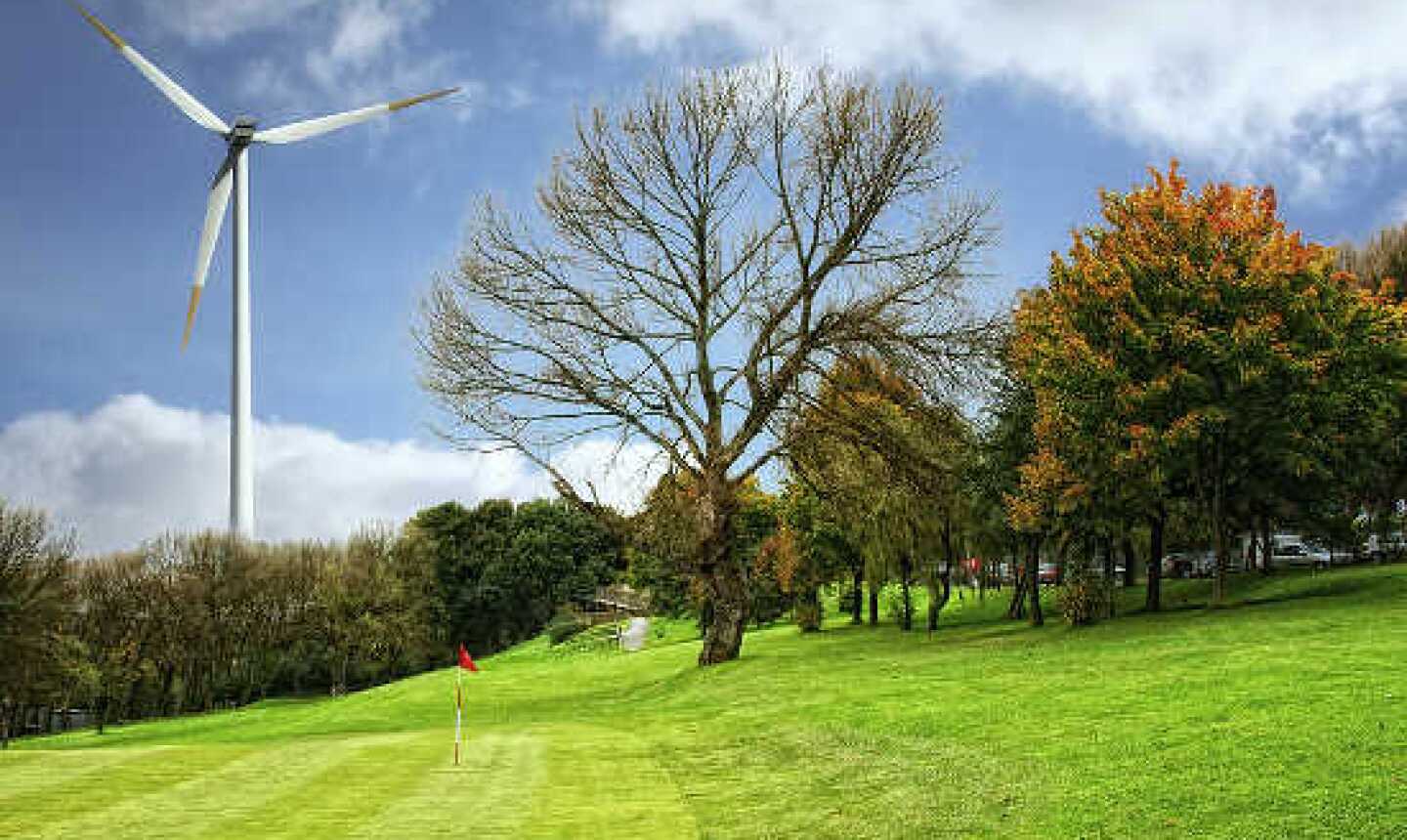 Not just for mini golf anymore: wind turbines are popping up on or near several Scotland golf courses. A wind farm is planned near Donald Trump's new course.

You've probably been hearing about the flap between Donald Trump and the country of Scotland.

In a nutshell, Scotland is planning to build a bunch of wind farms, including one offshore near Trump's soon-to-open golf course and planned resort.

Trump says wind turbines are so ugly, noisy, and dangerous they would not only ruin his project but lead to, "the almost total destruction of [Scotland's] tourism industry."

Last week, when Trump made this statement to Scotland's Parliament, the country's tourism arm (VisitScotland) released survey results showing that wind farms would have little negative impact on tourism.

The survey was based on 3,000 people -- not necessarily golfers -- and only those from the UK.

Before you share your comments, watch this potentially opinion-altering video:

So, will seeing (and possibly hearing) wind turbines ruin the Scottish golf experience?

Would you avoid certain Scottish regions or courses if wind turbines were present? (For example, one just went up near Royal Aberdeen's 14th hole.)

Please share you opinion or see what others are saying below:

Craig Better
Craig Better is one of the founding editors of Golf Vacation Insider. In addition to traveling to 15 foreign countries, he has twice traveled across America to play golf courses in all 50 United States. Prior to joining Golf Vacation Insider, Craig was a freelance writer who contributed to GOLF Magazine, Travel + Leisure Golf, Maxim Magazine, USAToday.com, and co-authored Zagat Survey’s book, America’s Top Golf Courses.
125 Comments

I've never played Scotland, and most likely never will. If Trump were building the towers to generate electrical power he would be adament about his right to build them where ever he saw fit. Golf will be around a long time longer than that big blowhard. Let him suck eggs...People will play wherever they want, if it is a place that has or has not windmills on it. Maybe if I were to win the lottery I would go there and see them for my own eyes and then decide.

I prefer to play next to turbines than to a nuclear power plant. It won't change my plans to travel anywhere.

In middle and northern Germany it' s quite common and you get used to it very fast.

Come and see yourself.

Wind turbines in the distance? Not so bad. Too close (less than a mile) and I won't play the course. I have been to Scotland four times to play golf. Last was at N. Berwick, Gullane, etc. It would not affect me as bad if I thought they were really necessary. As it is they have to be backed up with fossil fuel plants. are are at least five times the price per kilowatt. This means higher rates for your retired pensioners who are struggling as it is. Let's work on fusion, safe nuclear, low polluting natural gas and quit hammering our citizens with unnecessarily high electric rates just because some environmentalists want to force "sustainable" energy on everyone. These windmills also get damaged and wear out. Has anyone computed the energy cost to just build one wind turbine? The fuel to transport and erect it? It's probably not as "sustainable" or energy saving as we have been led to believe.

Trump is a "CHUMP"!
Wind farms are here to stay. If a clean, renewable source of energy is to be utilized, who but the Chump has a problem?
I do go to Scotland and have for 3 different 10 day golf trips. I love Scotland, its people and golf courses. I will be back many more times. I would wish for all that love golf, put this on their bucket list. NO PROBLEM WITH THE WIND TURBINES, what so ever!

What can you say. Anyone bothered by the presence of these structures has never seen the alternative scenario. Air so badly polluted by the burning of coal, people would love to be able to see far enough to see windmills. As far as the Donald is concerned, quit your whining, pack your bags and bless some other destination with your style, snow golf in Greenland comes to mind.

Wind Turbines are too expensive to build and yearley maintanance is very high ,so on a purely economic grounds they will Never pay.
They also Kill birds and bats because of the Shockwaves they produce,if erected near Human habitation these waves can cause serious medical problems.
On /Near a Golf Course, Unsightly and I would Never play there.

Personally, I find these fascinating and do not mind them. I live in Michigan &amp; these wind farms are proliferating. Also, as we travel on I-65 in Northern Indiana I enjoy them breaking up the boring topography of the area. I have also seen them offshore whilst on a Baltic Sea cruise near Denmark &amp; Germany and enjoyed sharing the waters with them. As long as they don't come into play and destroy an obviously scenic vista I have no problem with them.

The Trump course in Scotland should never have been built in the first place
Nothing more than a bully with loads of money !

The notion of playing under one is ridiculous.....

Remember the 1958 novel entitled "The Ugly American"? It has been retitled for the 21st century. The new title is "Donald Trump

Kira K. Dixon
Lifestyle Correspondent
Now Reading
Will Wind Turbines Ruin Scotland Golf Vacations?
New Cookie Policy
WE AND OUR PARTNERS USE COOKIES ON THIS SITE TO IMPROVE OUR SERVICE, PERFORM ANALYTICS, PERSONALIZE ADVERTISING, MEASURE ADVERTISING PERFORMANCE, AND REMEMBER WEBSITE PREFERENCES. BY USING THE SITE, YOU CONSENT TO THESE COOKIES. FOR MORE INFORMATION ON COOKIES INCLUDING HOW TO MANAGE YOUR CONSENT VISIT OUR COOKIE POLICY.
CONTINUE
Search Near Me