This is a hard review to write, becuase like so many golfers I just love Aspen Lakes.

How did one of the most scenic and breath-taking courses turn in to a bad muni course??? Greens were bumpy, brown, and dead in spots. Tee boxes were barely playable. Fairways.....well you get the point.

Very sad to see this happen. A business can't put out a product like this and expect customers to return and pay peak season rates. RIP Aspen Lakes.

OMG!!! This used to be my favorite in central Oregon and while there always made a point to play Aspen Lakes. On a recent guys golf trip, we played there and to a man, were all soo disappointed. Tee boxes were horrible, fairways were terrible and the greens were in the worst shape I have ever seen. And yet they charged FULL RATES! It will be until I hear the course has improved dramatically, I won't be back!

Most hospitable staff ever

From the moment you walk in the door to the clubhouse at Aspen Lakes that go above and beyond to make you feel welcomed. More so than anywhere I've ever played, which just made you excited to be there. They waived my push cart fee, the starter was very friendly and welcoming. It was my first time playing and so the marshal routinely checked-in on me to give me course pointers and tips. In addition to this they had someone else driving around handing out bottled waters, he was so friendly he ended up joining me and playing the final two holes of my round.

The course is fun, with generous fairways to hit driver, but with enough water and fairway bunkers to make you think twice about your target and club selection. There are creeks the wind throughout the course that require appropriate club selection to make sure you don't hit or roll into them. The bunkers (luckily didn't go in one) are beautiful to look at because of the volcanic red rock, but look somewhat treacherous because it's not your typical sand.

The course was in great condition besides what looked to be some areas that don't drain water great, but these areas are usually off to the side and not where you want to be hitting it anyways.

Would play again for the golf but also just because of how welcoming the staff is.

Thanks to the team at Aspen Lakes. It was hot out there today...91-93 degrees. But I didn't go more than three holes when there wasn't an Aspen Lakes employee offering water and cold-wet towels. Really appreciated their help. Thanks Aspen Lakes!

It was my first round here, course was in great condition. Staff was exceptionally friendly, course Marshall’s were out ensuring pace of play was good and asking if we needed anything. Beer cart was also making rounds, made it feel like everything was somewhat “normal” during these crazy times. I enjoyed the vast difference of layout of the front and back 9. Very happy with my first visit here, will definitely return.

My playing partner and I both thoroughly enjoyed this course in our swing through this part of Oregon. This course was a highlight for us. Scenic fairways, stunning lava-red sand traps, great views of the surrounding mountains and a reasonable challenge for 2 low-teen handicappers. Would highly recommend it.

2IZsGL6tTEGur9gNQI4e
Played On 07/18/2019
Reviews 2
Skill Intermediate
Plays Once a week
I Recommend This Course
5.0
Previously Played

Despite golfing In Central Oregon for years, I only played Aspen Lakes for the first time last year. I heard about it on the Morning Drive on the Golf Channel a few years ago (listed as a top 10 hidden gem in America) and told myself I should check it out. The course conditions are incredible. The landscape is very scenic with the mountains, water, and red bunkers— you can be playing terribly and still enjoy the course aesthetics. It’s a lot of fun with the high risk/high reward scenarios on many holes. Pace of play is perfect— can’t remember ever having to wait for anyone and I know no one has had to wait on me. I’ve casually talked to the employees in the clubhouse, the marshal, and a few of the groundskeepers and everyone was super friendly. After your round I highly recommend you check out the back patio at the clubhouse for a cold beverage and some food. I’m kind of a bargain golfer but this is a course I have no problem paying prime time greens fees for.

2IZsGL6tTEGur9gNQI4e
Played On 07/18/2019
Reviews 2
Skill Intermediate
Plays Once a week
I Recommend This Course
5.0
Previously Played

Beautiful course- have to play if you’re in the area

The course was in fantastic shape. The landscape is beautiful. Front desk, Marshall, groundskeepers were all super friendly. Clubhouse is great— it’s worth it to go get a bite to eat on the back patio even if you aren’t golfing. I’m usually a bargain golfer but this is a course I have no problem paying prime time rates for. .

Love the golf course but dont know if i will come back after today. Nothing better then driving 3 hours to start a 4 day golf trip and told theres a 3 and a half frost delay when its 35 degrees. Really???? Called another course and they have no delay. Widgi creek here we come.

Christmas all year around...

One of the first things you notice about Aspen Lakes is the red bunkers. Ground from the local cinder (as a choice by the course designer to avoid shipping in white sand from out of state), the bunkers give the course a distinctive (dare I say christmas'y) look.

Beyond being visually appealing, though, it should be noted that the bunkers do play differently since they are essentially ground up lava. I was fortunate to have a chat with a local before playing and it helped on the one fairway bunker I found as well as the single green-side trap I needed to play out of. Simply put, the cinder bunkers pack down and play a little heavier than regular sand. It's not "bad" like wet or "dirty" sand... but it is different. What I was told is that often (when possible) even the green-side traps should be played like a fairway bunker or waste area.

Beyond the traps, there is plenty to love about Aspen Lakes. The course is in fantastic shape, especially given that it spent a significant chunk of the winter under as much as four feet of snow. It lays out very nicely among creeks, ponds and enough in the way of elevation changes to keep you actively testing the various capabilities of your clubs.

I actually played a very good round (relative to me) and carded an 85 just inside of three hours. I was second out, playing as a single behind a local who was also playing by himself, so I don't think this is something you should typically expect. However, pace of play seemed to be good all day long as far as I could tell.

I was fortunate to avoid any real trouble, however I can see how you could have a completely different scoring experience with a few breaks going the wrong way. There is no shortage of challenge on the course. I also played the whites, protecting myself from some of the tougher shots. The #2 handicap 14th was (by far) the toughest hole for me, with a waste area in the landing zone of the typical driver, it almost requires a 200+ yrd approach shot (albeit from an elevated fairway) from just about anyone playing the hole.

A club Without a PA system, Aspen sends it's players to the tee courtesy of an old fashioned human starter. Whether you are on the range or practice green, the starter will track you down and get you on the tee box ready to hit at your allotted time. This personal touch is nice and I'd love to see it more often.

On that note, the staff at Aspen Lakes were energetic and enthusiastic about their work, and it really created a good vibe heading out to start the round. Laurie even took time out to give us a quick tour of the Sisters Mountains from the deck outside the clubhouse; a view well worth taking in especially when the “girls have their dresses on” as the locals call it when the mountains are snow capped.

Overall, Aspen was a terrific experience; Beautiful course, great staff and set against an absolutely stunning backdrop of major Pacific Northwest Mountains. I not only recommend the course, but have every intention of making the trek back to play again myself.

The overall conditions of the course were very good, very green, nicely manicured, greens were in excellent condition, and the scenery is beautiful. I thought the course was a little overpriced compared to what I paid at other courses in the area, but definitely worth the play.

All the benefits of family owned & operated golf courses.

One common theme to my travels is that family-owned golf courses—especially when they’re managed by The Family—is a great experience. You always get service with a smile, the food usually consists of some famous family recipe, there’s great attention to detail throughout the property, and there’s the general hospitality you might get when you’re visiting someone’s house. That was all true at Aspen Lakes in Sisters, Ore., which is owned and operated by the Cyrus family. The course was built by William Overdorf, and among the memorable features are the views of the surrounding mountains and the red sand in the bunkers, which they got by crushing red cinders that naturally exist on the 1,084-acre piece of land that is adjacent to the family farm. Green fees range from $20 to $75, depending on what time of day you play. 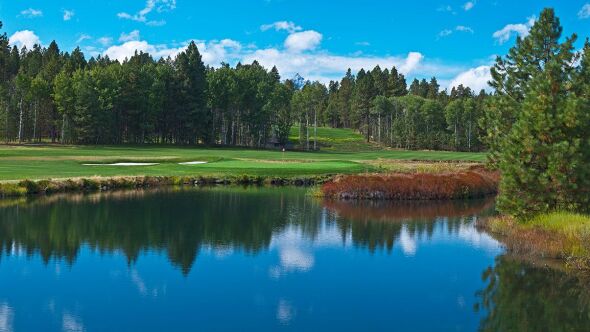 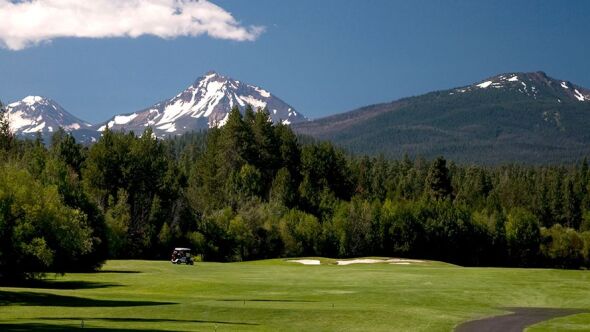 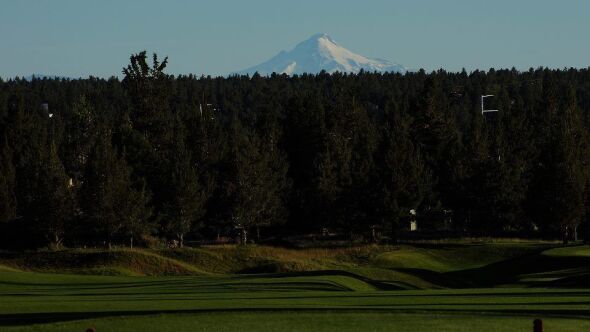 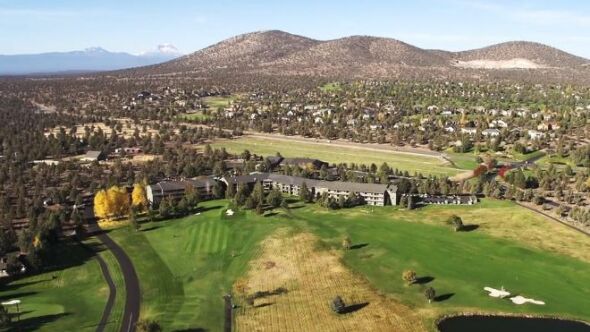 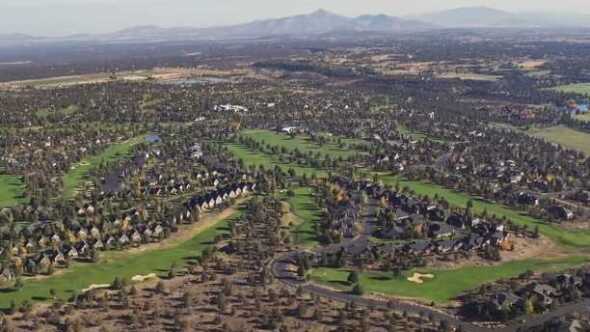 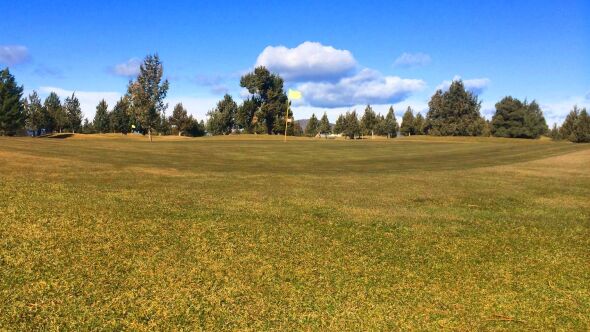 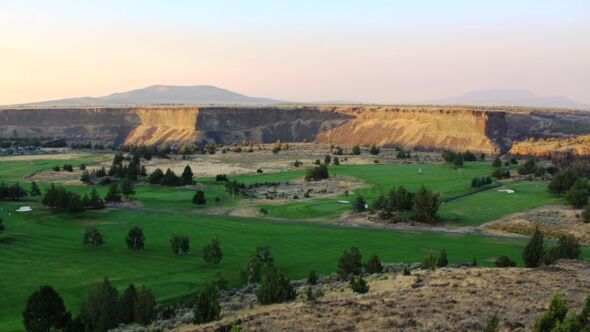 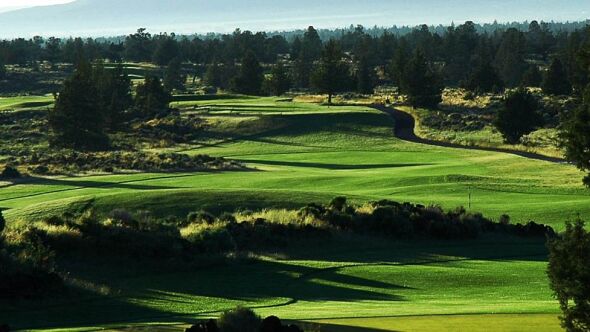 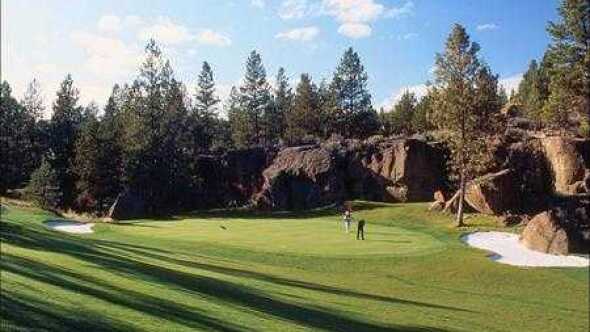 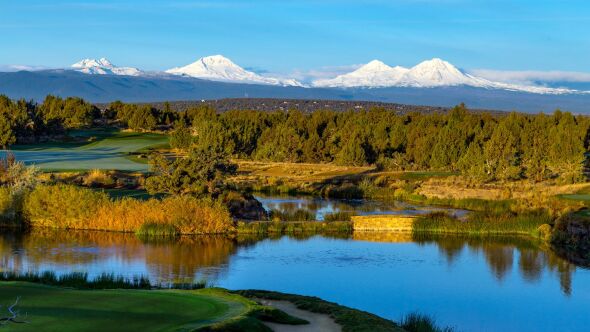 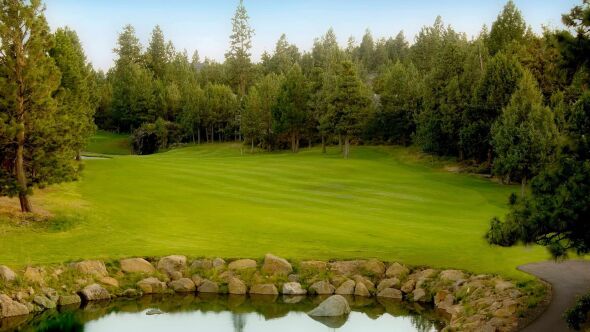 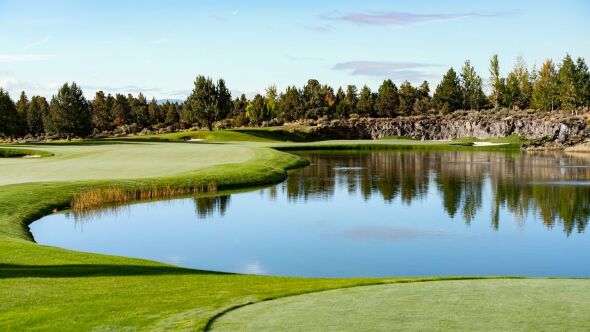 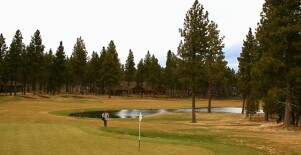 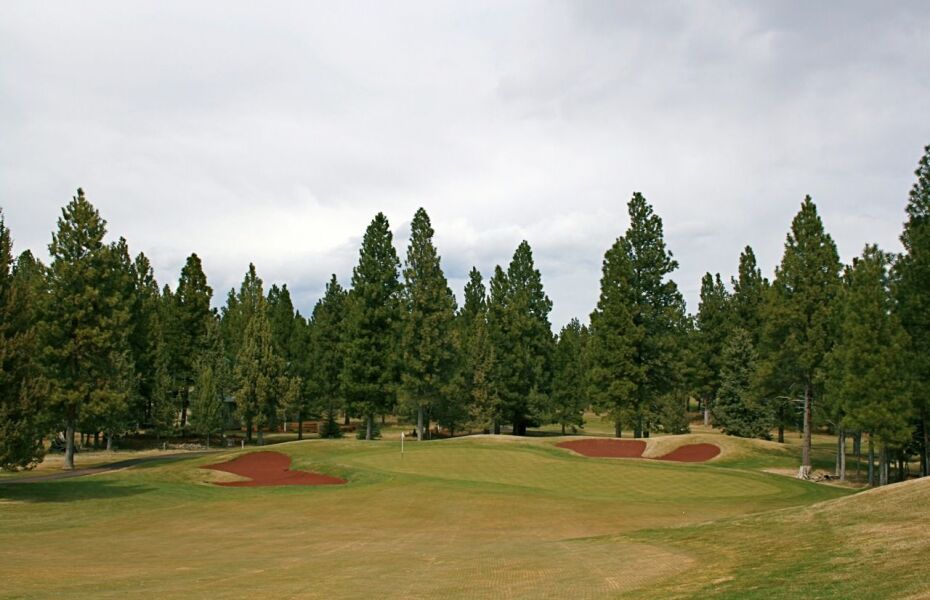 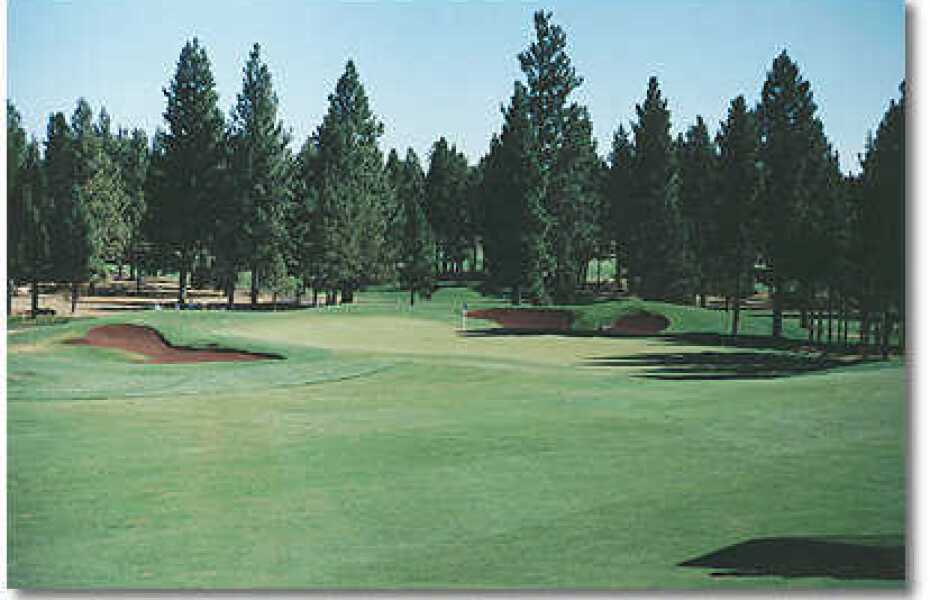 Aspen Lakes: Hole #1 - Great starting hole. Leave your tee shot short of the bunkers on the right for a short iron shot to the green. ( Dave Blackledge ) 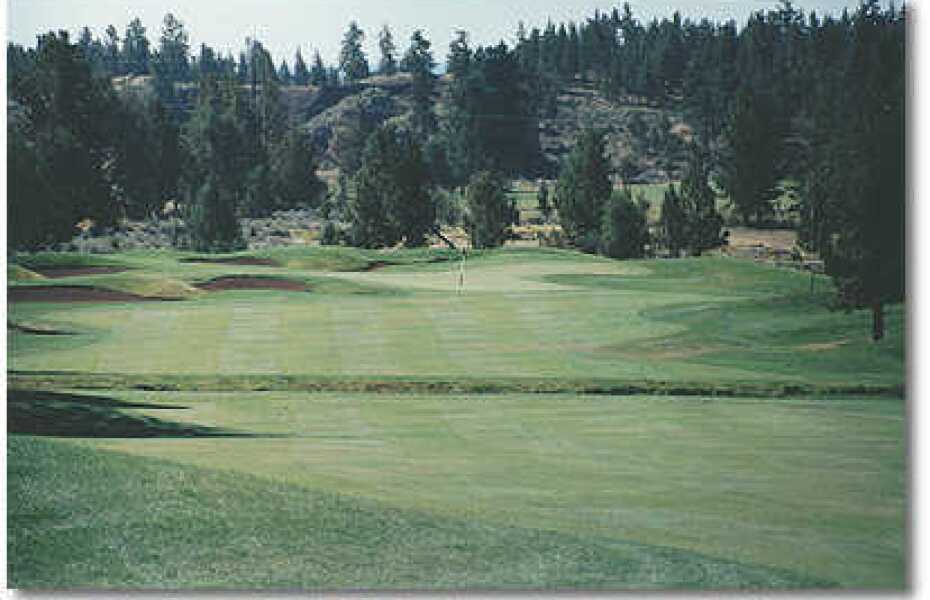 Aspen Lakes: Hole #3 - Let it rip off the tee. It takes two long shots to clear a canal that cuts across the fairway. Lay up short of the canal for a short iron shot to the green. ( Dave Blackledge ) 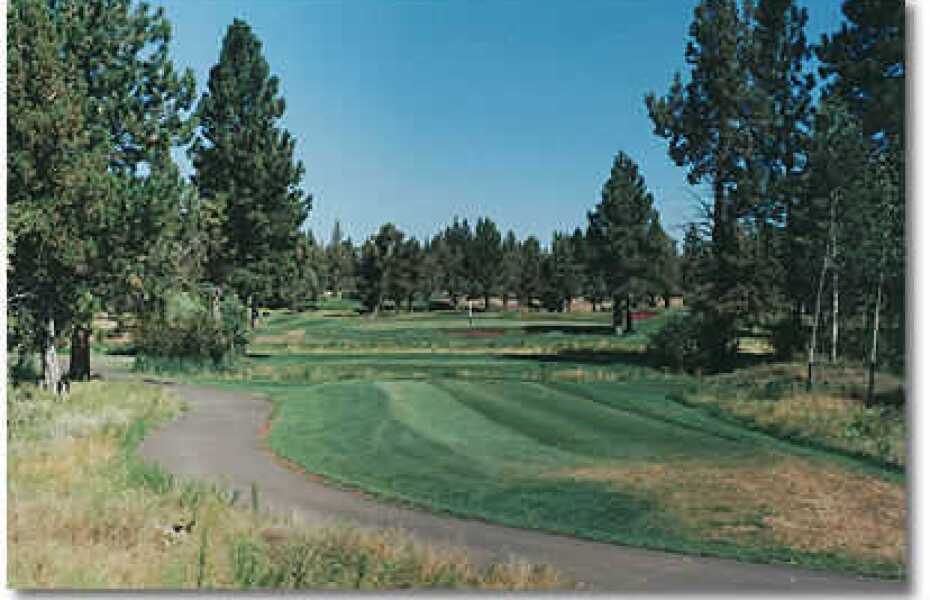 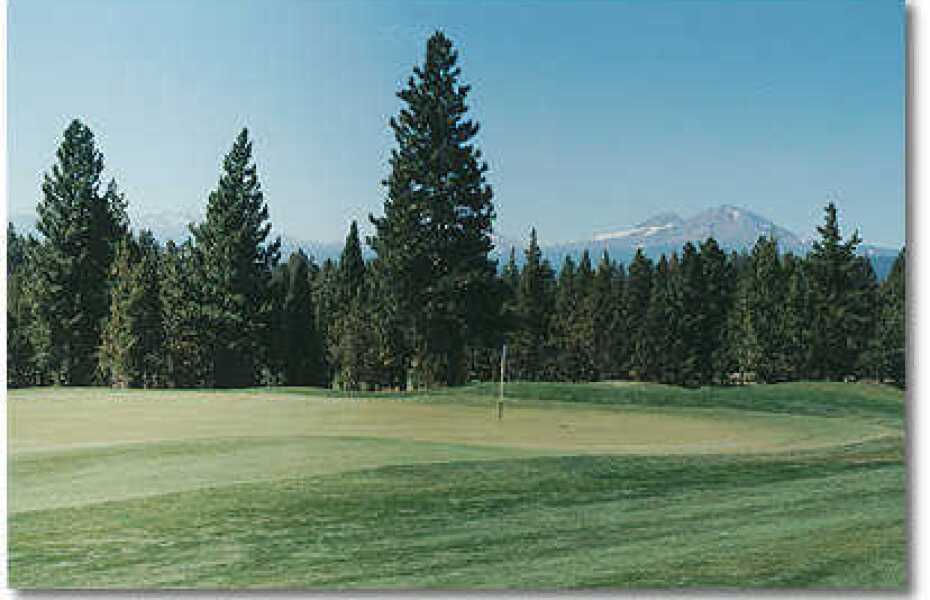 Aspen Lakes: Hole #5 - A long par 4 with slanting fairway from right to left. The green has two distinct levels. A par is a great score on this hole but hard to get. ( Dave Blackledge ) 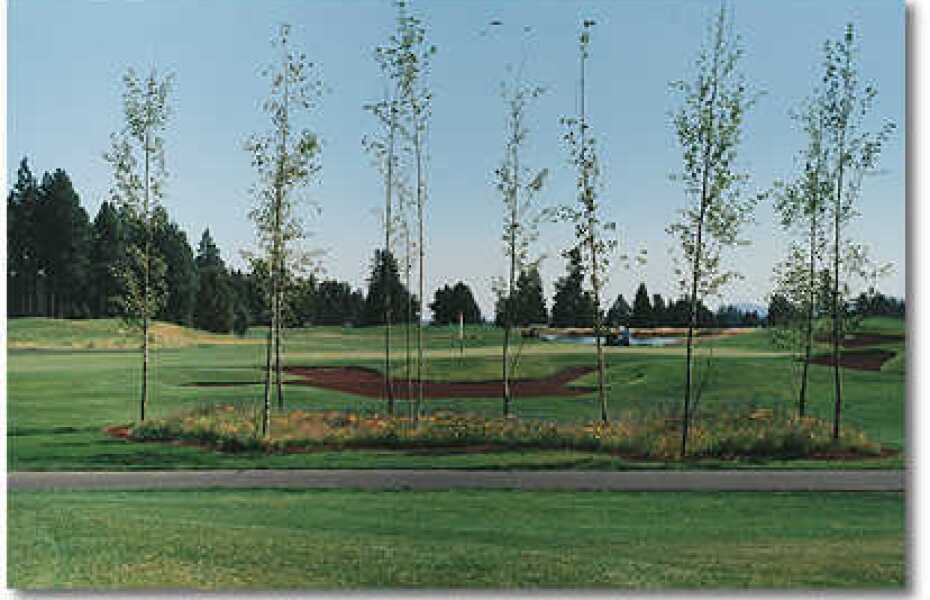 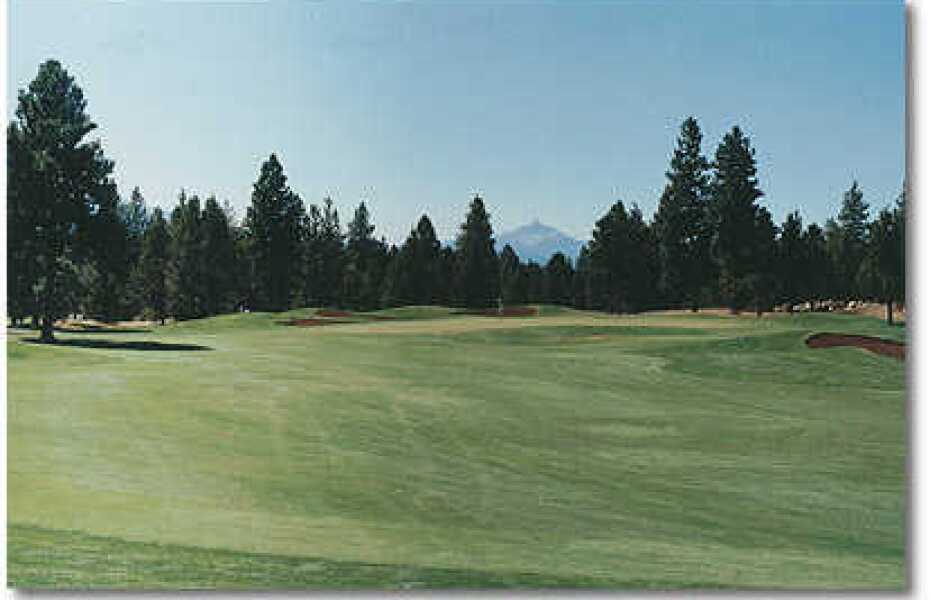 Aspen Lakes: Hole #9 - Favor the right side of this par 4. The green slopes from back to front and right to left with a ridge running through the middle. ( Dave Blackledge ) 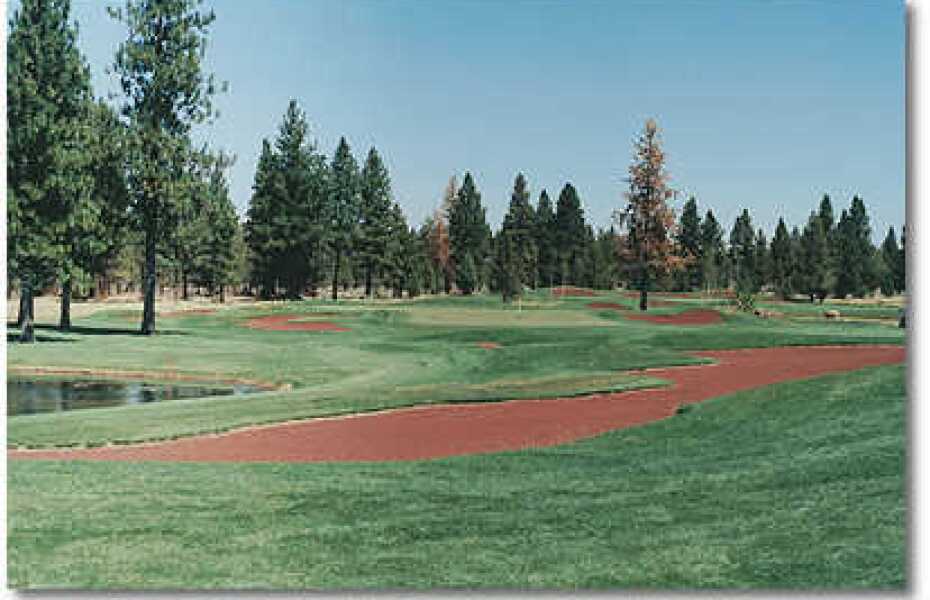 Aspen Lakes: Hole #11 - Play your tee shot to the right of the waste bunker located on the left of the fairway. This will leave you with a great iron shot to the two-tiered green. ( Dave Blackledge ) 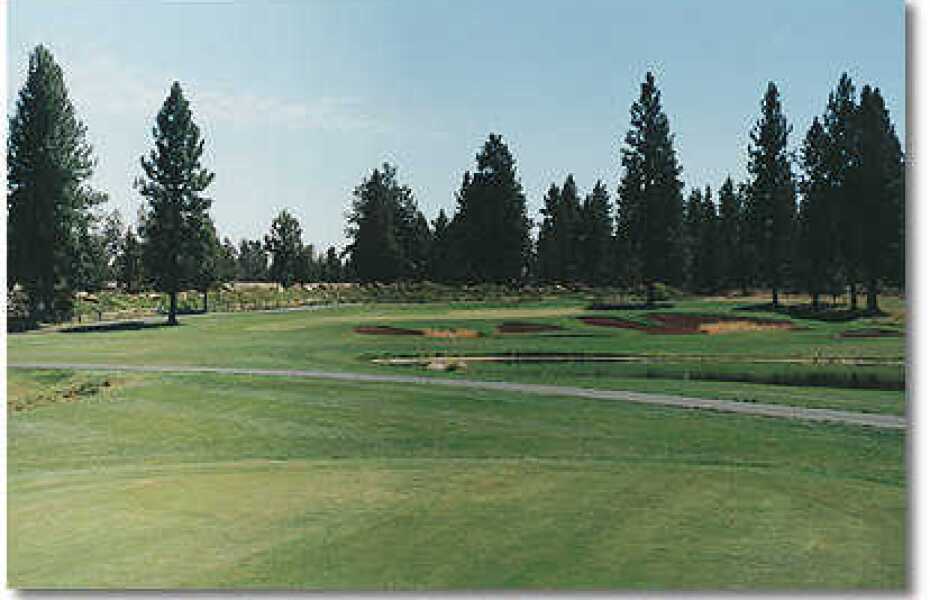 Aspen Lakes: Hole #15 - A beautiful and difficult par 3, with water and bunkers fronting the green and environmentally sensitive area behind. ( Dave Blackledge ) 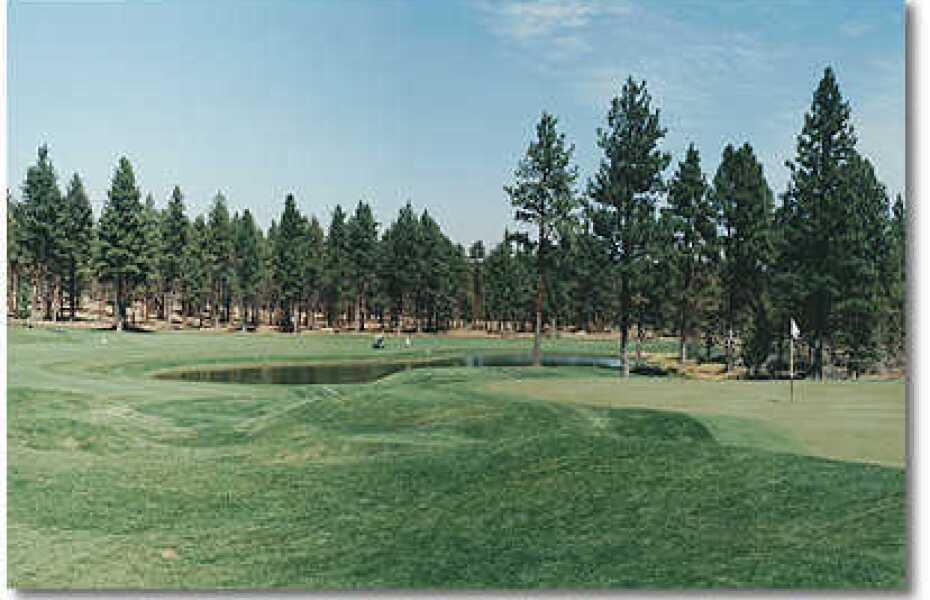 Aspen Lakes: Hole #16 - A dogleg left par 4 protected by water along the entire left side. Favor the right side off the tee. Approach shot is to an elevated green with grass bunkers on right and bunker behind.. ( Dave Blackledge )
10 Images
16900 Aspen Lakes Dr, Sisters, Oregon 97759, Deschutes County
(541) 549-4653
Course Website