Hazeltine National Golf Club is the result of former USGA President Totton P. Heffelfinger's quest to create a course that would host major championships while providing a pure golf experience for club members. Designed by Robert Trent Jones, Sr., Hazeltine National opened for play in 1962. Son Rees Jones renovated the course in advance of the 1991 U.S. Open. PGA Professional Mike Schultz says, "If you are out of position at Hazeltine, you are always hitting over something."

Hazeltine is a brawny, championship-laden golf course that plays even longer because it is largely exposed to the Midwestern wind.

The first thing you notice when setting foot on the premises is that that the membership is very proud of the major championship heritage. They have done a very nice job of encapsulating mementos from each one it has held.

These were among the fastest greens I can recall playing on. We were told they were stimping at 13 today and without a wealth of experience on greens that quick, it was easy to putt defensively. Just accept that this is a different animal and expect to have a few more 3-putts than normal.

Holes 4-8 stand out on the front. A mixture of alternating doglegs, with a bunker guarding the inside elbow - a RTJ staple - dominate the design. The interest and intensity ramps up after the walk from the ninth green to the 10th tee, which kicked off my favorite hole on the course. No. 14 was another standout, offering a risk/reward gamble off the tee. The signature 16th offers a breathtaking tee shot that must avoid Lake Hazeltine, and an approach into the windiest corridor on the property.

Our host for the day made it an immensely memorable experience. Like most members, I suppose, they delight in sharing their club with players who truly embrace the history of the place.

A friend of mine won a round of golf at Hazeltine for himself and two others. I was lucky enough to be selected to play along with him. What a fantastic day I had at Hazeltine National!

I want to start this review with the practice facilities, which are really good at Hazeltine. They have a tremendous driving range, a large putting green, and a nice short game area. Of course all of this is stocked with Titleist practice balls.

The golf course itself is one of the most challenging I've played. The first hole is a bit of a breather but after that it gets really challenging. The greens are firm and very fast, which makes both putting and chipping a challenge. That said, the greens were some of the best I've ever putted. If you got your ball started online, it always found the bottom of the cup.

The difficulty in Hazeltine comes from it's rough, and its many bunkers. I wasn't controlling my ball very well, so I got to experience a lot of the rough and too many of the bunkers. While both were well maintained, it's easily a half stroke penalty if you miss the fairway.

Perhaps my favorite part of the entire experience was getting to spend time in the clubhouse, and the locker room. There is so much history around the club that you can't help think about the greats that have played there. I got goosebumps looking at the major championship trophies on display in their Hall of Fame.

If you ever get a chance to play Hazeltine and experience the place, you definitely should. I would never turn down and invite to go back!

Wow. I don't think much explanation is necessary here. This course has so much history... from USGA championships to major championships to Ryder Cups. Even if the course was amazing, this would be a must play course if you can... but it is amazing and beautiful.

The most surprising thing to me was how fast the course played... even with a lot of rain. I expected mushy, soft fairways and greens, but that is not what I got.

Golf in the Twin Cities/Minnesota area is just imbued with history...

Charles (Chick) Evans Jr. winning the US Open at The Minikahda Club with 7 clubs in the bag; Robert Tyre Jones Jr. winning the Third Leg of what the New York Sun's George Trevor termed "The Impregnable Quadrilateral," which O.B. Keeler reduced down to the "Grand Slam"; multiple PGA (think Y. E. Yang's hybrid on 18 to take out Tiger) and US Open venues (Payne Stewart in an 18 playoff over Scott Simpson), both held at Hazeltine National and being one of less than a handful of states that has held EVERY one of the 17 championships the the USGA conducts. And amongst that history is Tony Jacklin's (the only player under par at the end of 4 rounds) 1970 US Open win at Hazeltine, this after Dave Hill's classic response to the question of what the course lacked: "Eighty acres of corn and a few cows. They ruined a good farm when they built this course."

Many, many years later and after a successful 2016 Ryder Cup campaign by the United States, Hazeltine has attained a place in the mind of the recreational golfer that stands aside clubs like Oakmont, Pebble Beach and Pinehurst #2. Rightfully so. This golf course in Chaska, MN, is just... brawny. It's muscular but not in a brutish way. Nor is it sinewy. It is simply mighty, rugged and strong.

Forget playing it from the US Open plates (the tees that are behind the back tees - unless 7600 yards of golf makes sense to you). Blue tees are a shade over 7100 and the gold right between 6600 and 6700. Interestingly, the slope for both tops 145. The key to playing Hazeltine well lies in driving the ball in the fairway. The rough and it's thickness and difficulty makes getting the ball on the green in regulation FROM the rough next to impossible. The green complexes are pronounced in their difficulty, with strong bunkering and a fair amount of movement on the large putting surfaces. Remember, if you have some experience with RTJ courses, this may have been a classic Robert Trent Jones design (and, to a degree, it still is) but when his son Rees came in to bring it all together, it became what it is today: A Quintessential American Golf Design. If you have a chance to play here, do. If you have the opportunity to become a member, please do. This course, this facility, brings out the very best in those it touches - from the caddies in the Evans Scholarship program, the professional staff that is exemplary and a membership that understands and recognizes why history matters SO MUCH to the Game of Golf.

Great Destination, Will Be Legendary

Hazeltine will be hosting the 2016 Ryder Cup and I had the opportunity to play the course about 1 year prior - so the same time of year, expected weather, conditions as when Team USA and Team Europe square off. Fall in Minnesota is gorgeous and this course delivers with scenic views that were highlighted by trees changing colors. The routing for the Ryder Cup and when I played will be slightly different - but that is being changed for the Ryder Cup so that the most dramatic holes will be some of the pivotal holes late in matches.

The course conditions were spectacular and this course has a tremendous balance between providing challenges for top-tier players, but also a lot of fun for the weekend warrior like myself. And this course will be the perfect stage for great match-play competitions, both between the world's best in the Ryder Cup or just you and your golfing buddies. 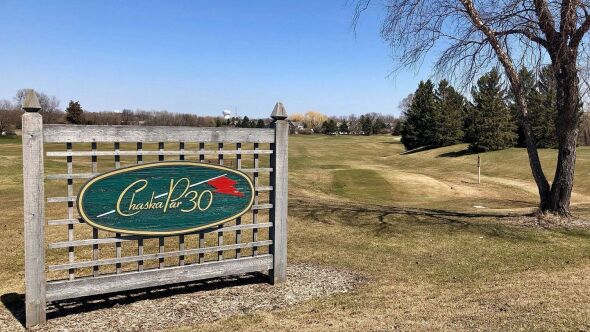 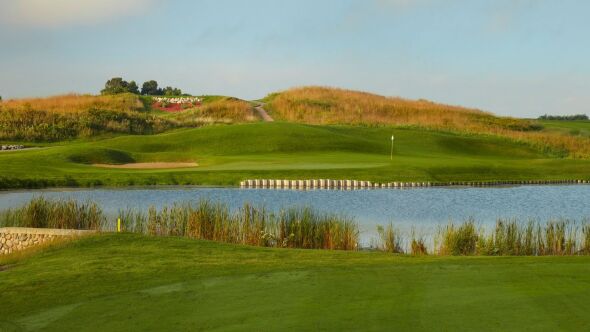 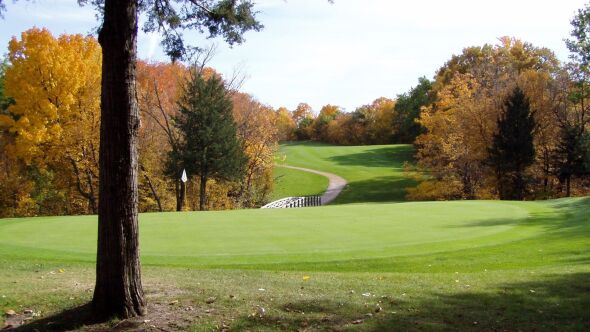 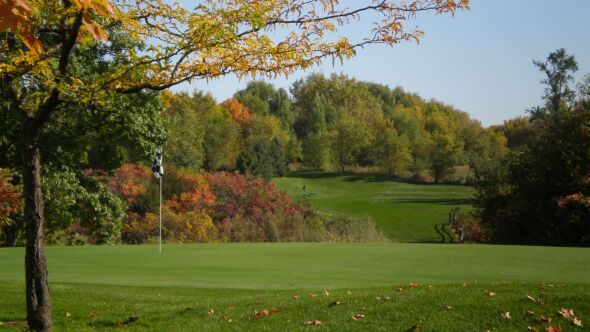 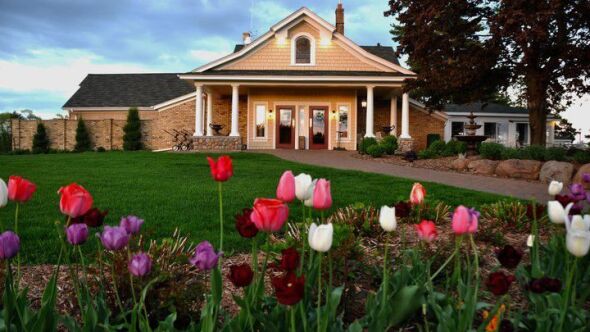 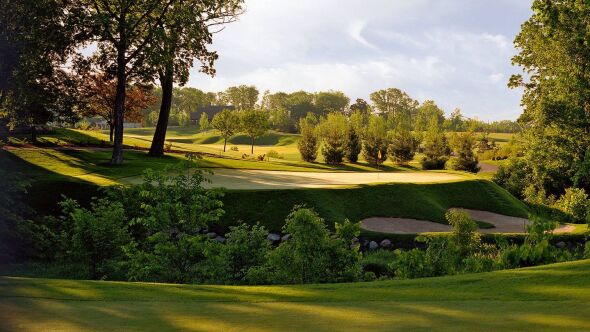 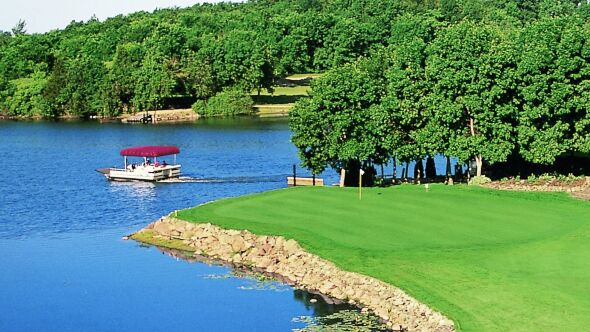 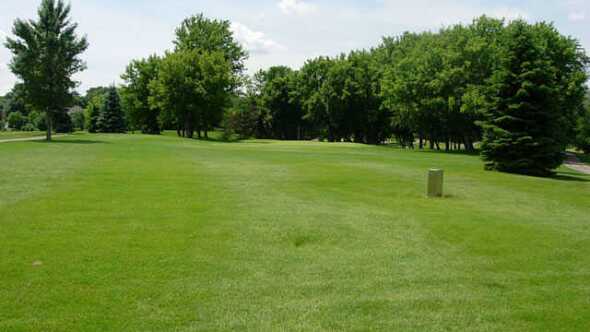 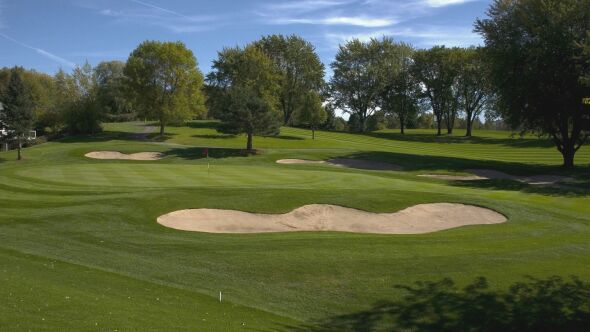 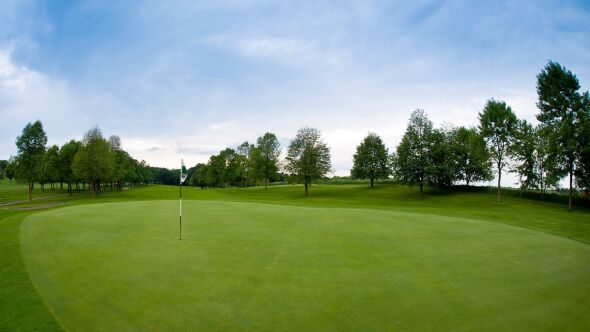 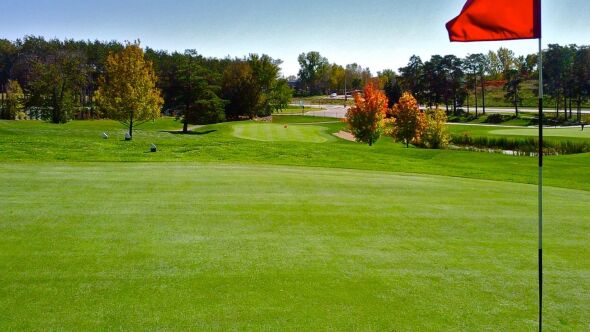 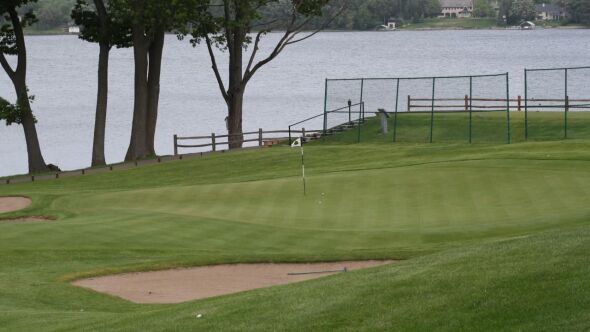 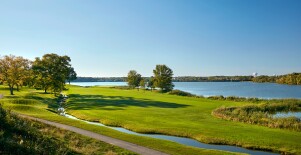 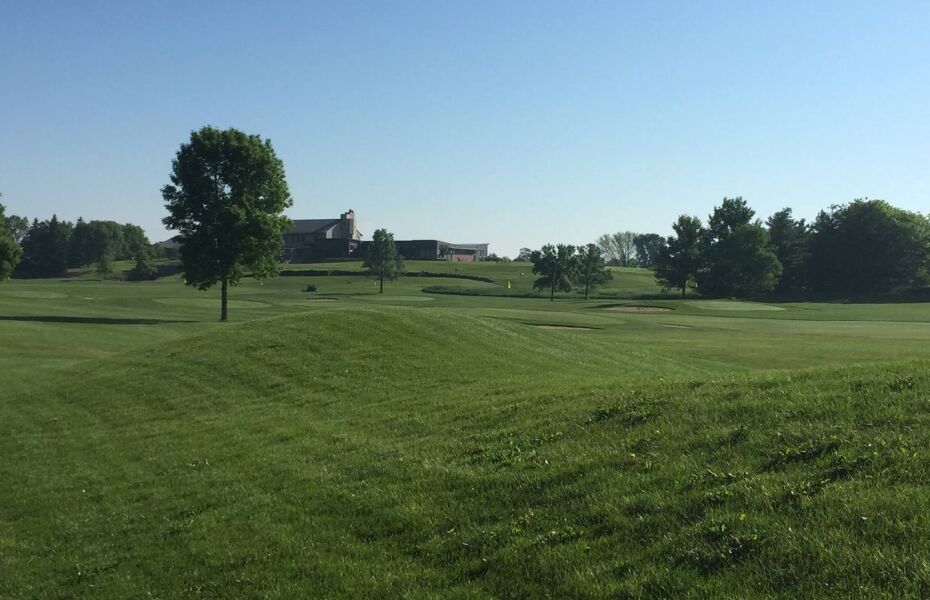 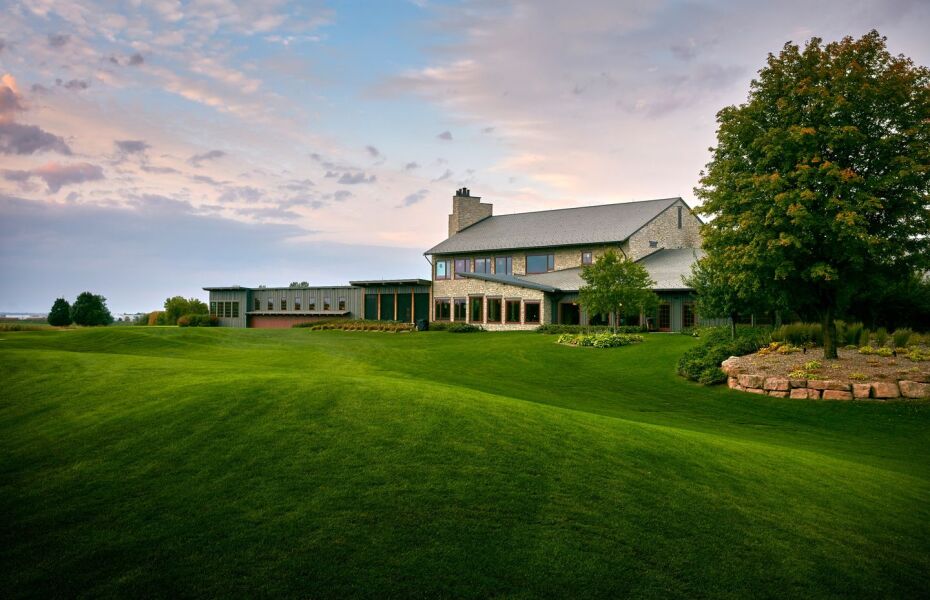 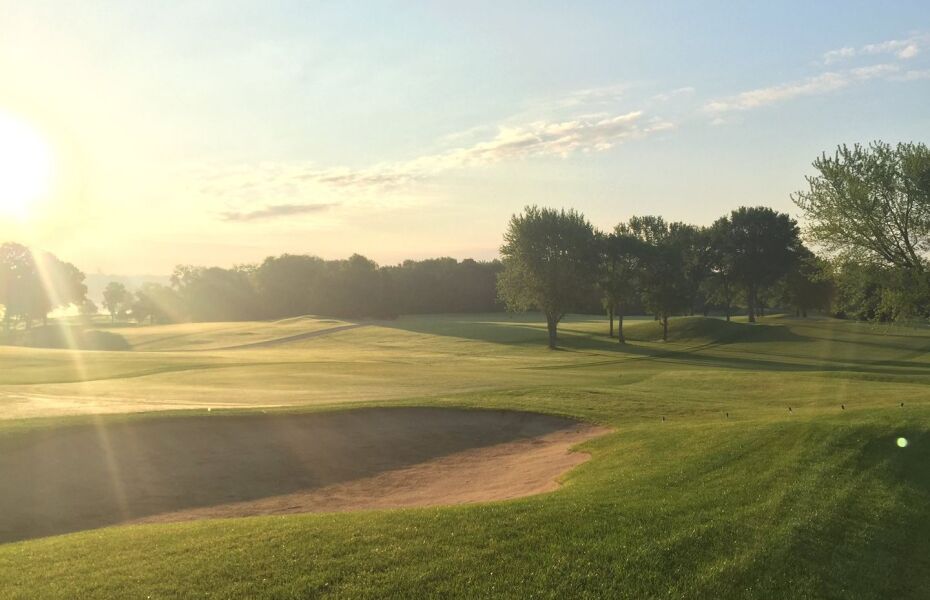 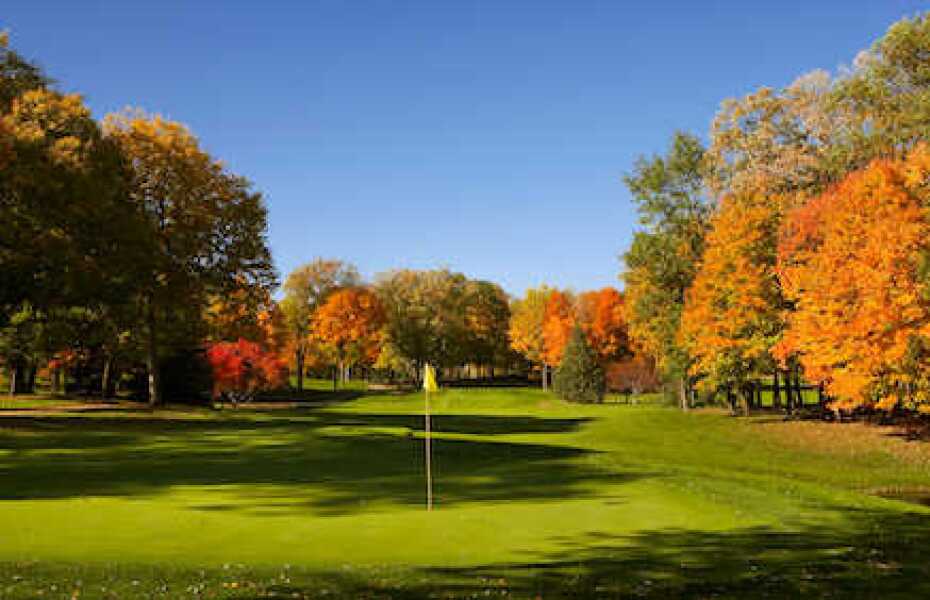