The fact that this is ranked ahead of granite links on two different websites is a crime. I was a little skeptical of playing here when i saw an article “woman assaulted on golf course” and several reviews talking about things stolen while golfing. This course is in the middle of the hood and a mess of a parking lot. The course itself is in pretty decent condition but has zero layout of each hole on either the scorecard or tee box. There are no yardage marks anywhere on the course. The kicker and icing on the cake was on hole ten (5:50pm) a staff member rudely demanded we return the cart. We payed for a cart for 18 holes, explained this several times and were also given a 745 cart return time by the starter and pro shop. After several attempts to find middle ground with this unreasonable staff member we were basically forced to get out of the carts and walk. Great customer service. The foursome behind us couldnt believe they had to give up their carts and walk either after explaining to them the situation. Three quotes to show what an unreasonable ________ this guy was “okay well im gonna walk back and whatever price we come up with is what you re paying for extra time” “you re wasting my time with these questions” also proudly claiming “no one has completed 18 after the 530 mark” (probably bc they re forced to walk the rest of the way.) This course is bush league level management and a let down if this a top course of boston. Id never golf there again until they get their act together.

Rl7gxpL2wtNiD4zKOovY
Played On 03/05/2020
Reviews 1
I Recommend This Course
4.0
Previously Played

28 million dollars will be invested to improve Franklin Park! Why is this? Because the golf course and zoo is making $$$$$$$$. Locals will tell you not to golf at the course to keep you away. The fear of higher fees, lack of tee times and parking is of great concern. I built a my house about 14 years ago right across the street from the golf course and yes my life is blessed. The urban setting can be loud at times but wow on a peaceful day you might hear the lion roar..

The course is not in the worse condition I've ever seen, but it's not for golfers (really for hackers). The neighborhood blasts obnoxious dance music by mid-day. I asked the ranger if that was normal and he said, "every weekend it happens". Sort of like when attention seeking "dudes" drive cars where their bass kicker box vibrates everything around it and sets of alarms on other cars (but you're trying to play golf). Golfers on the course do not have any etiquette (they stand in your fairway waiting, then hit balls towards you when they are out-of-bounds and in your fairway). It's a bit of a circus to me, but hackers may feel right at home here. On the positive, the staff is friendly and quite easy going.

Lets see, on our first visit we had:
1) A group of teenagers rob our bag in front of the staff.
2) When the staff confronted the boys we were told "well they said they didn't steal anything".
3) Again in front of the staff the boys jumped on our golf cart and threatened our group.
4) Staff refused to get involved and assured us it was just the area.
5) On multiple fairways we had older men walking across our game brown bagging liquor.
6) No parking (This is next to a state park so the golf course cannot claim their own spots). You will however find plenty of locals drinking/smoking in self made camps in said spots.

This course is in a ghetto and the staff has absolutely no control over the locals.
Even while staff was well aware of what was going on, no compensation was offered.

Avoid this course at all costs.

The last time I played Franklin Park, in the 1990's, the place was a mess. Fairways were scratchy, tee boxes were awful, greens were highly irregular, and sand traps were, well, not very sandy.

What a great renovation they have done with this place. We played today when it was close to 100 degrees in Boston. But it was windy enough so it didn't feel that bad--and while there were others on the course, clearly some were scared off.

The course is set in a very large park area. It is mostly an open area, with rough and areas of fescue. Many fairways appear open, but others wind through rough and meadows. Everything, including the greens, was in great shape--maybe a couple of tee boxes were a bit off but the greens and fairways were great. There are a lot of really interesting holes and none that I thought were really badly designed.

Players who hit the ball a long way may be a bit frustrated. No par 5s on the front nine and the blues and whites were together on many holes. But for us (two hackers in our mid-sixties), there were only a few holes on which par was clearly not gonna happen when we stepped to the tee. Not a lot of sand traps, but there are some small greens. And going into the rough or fescue can make life much more difficult.

The scenery was really lovely and seemingly wild, though the course sits next to a busy urban street. There is a new, large clubhouse with a real pro shop and a lunch area. I hope to play there again--because there were so few people on the course and because it was in such lovely shape, it was one of the best golf experiences I've had in awhile.

There are some negative comments below--I think they all go back to some years ago, before the City of Boston put some real money into renovating this course. This is a truly fun, interesting, attractive, and challenging place to play.

Stupidist Course in the World

I played a high school match here and it was torture. I hit a perfect sot and it rolls off the green and my opponent snap hooks it and it hits and rolls to two feet. This course is bull. I hate it. I had to apologize to the school whos home course this is because it was so bad. (the course is in good shape for the most part but the way that it plays with kicks and stuff is horrendous). If you find yourself on this course try to hit bad shots because they will end up being better than your partners good shot. Also the fries that we had on the way home were great.

expensive. public. not worth money

Good course but got all my things stolen on the 8th hole while teeing off. It is a shame you can not play golf without worrying about your stuff. This is sad ,this was not the first time this person has done this.

Course is in great condition and the greens are perfect

This course has great scenery and is a nice layout

Great layout. The first few holes are noisy, a road runs along the first two holes. It didn't bother me, I think it adds to the mystique of the old place.

This course is a well maintained good course that could be a great course but for the pace of play. I have played there on several occasions, not as much as in the past, and it is always the same. There are VERY SLOW golfers out there and the Rangers do noting to speed the play. Frustrating and throws your game off having to wait on every hole.

Short layout with some elevation change. Greens can be tough though, and were in very good condition. The rest of the course was in average condition. Pace was faster than expected, since I played on a Sunday afternoon and expected a 5+ hour round. Not very expensive, and the Golfnow rate of $30 with a cart was very low, so value was good.

US Open rough but fair if saty on faitrway or first rough cut.

Only complaint is no markings on tees and no markings to navigate from hole to hole.
In particular hole 6 to hole 7.
Other than markings great day even though we go caught in torrential downpour.

14 hours before i played i booked a tee time on golfnow for $16.67 (18,cart,+fee). probably my 4th or 5th time playing this course. I teed off 15 minutes early at 650 and there were few players on the course. The conditions were better than i remembered them being. Fairways were good and greens rolled quick and were in great shape. i was only in one bunker and the sand was nice and loose. Course is somewhat wide open but you have to work your way around some long fescue. The only thing i can say needs improvement is the rough around the greens in some spots. It was inconsistent and spotty with patches of dirt and grass mixed in making for some tough up and downs. i only noticed this on a few holes though. Id recommend playing this course. its a classic Donald Ross, 2nd oldest in the country.

Course is in good shape, especially the greens

Overall I was impressed with the condition. It's had issues drying out in the past but that was not the case Thursday. Franklin Park has one of the best holes in Boston, one of Ouimet's favorites #12, tough up hill dogleg left with a dime green. Get out and play it people, its a good one:)

Due to the total indifference of the course superintendent with regard to the golfers waiting to play, we wound up leaving after waiting for roughly an hour and a half with others who had simply run out of patience. I understand that work has to be done to keep a course in order but it seems that a course should not open its doors and collect greens fees when there is a half day delay for play. Very disappointing.

Still expensive enough for early in the season and course conditions not great. Greens were very good though. Quick for the time of year.

Great course, I especially liked the elevation changes within each hole play. The greens were in great shape. This is a municipal course so note that there IS NO BEER CART :(

I would recommend that the course management add more signage at the holes as well as along the cart paths. We got lost a few times between holes because there was no signage.

Great experience, always worth it.

It is more than a diamond in the rough. It is a classic. Must go, and even better if it is with someone that knows the course well. Fair # of blind shots and "safe" areas to know about. They do a great job with conditions and staff. At least worthy of a once a year visit. The more you play it, the more you will like it. 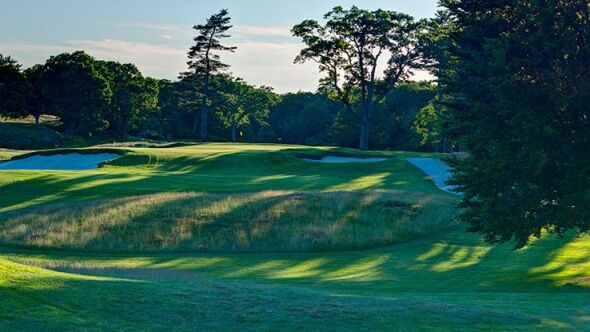 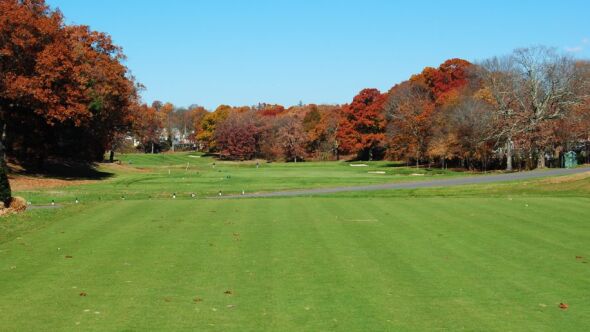 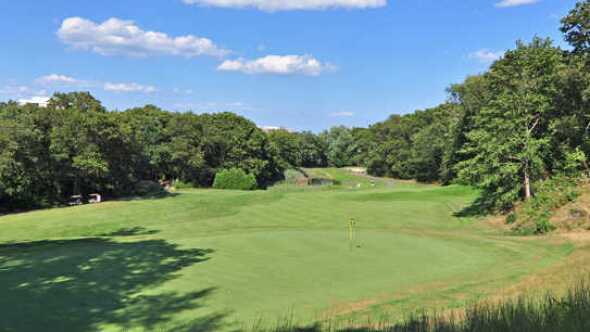 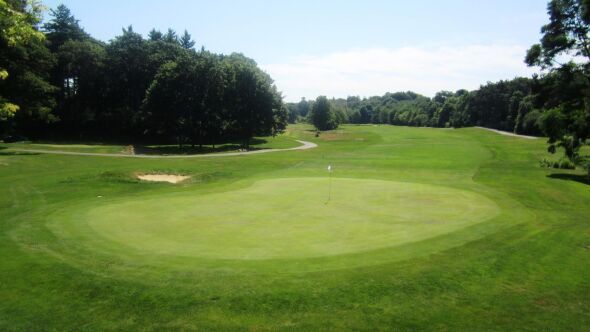 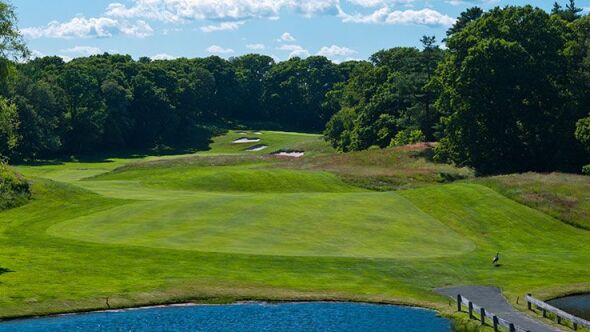 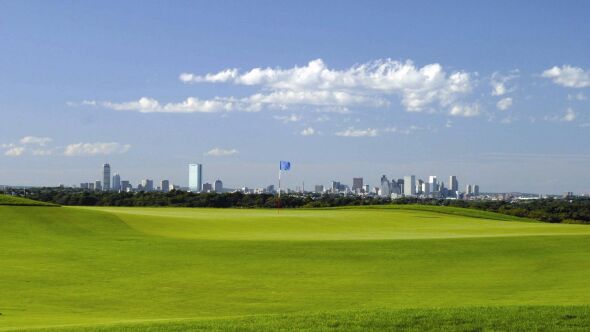 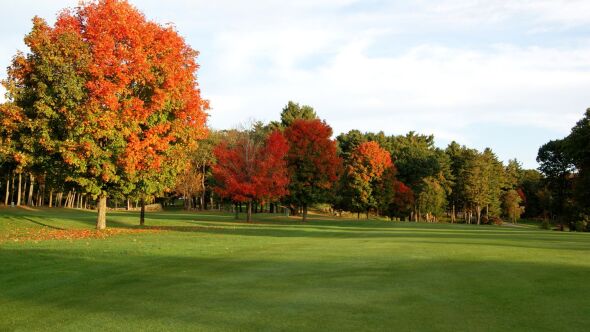 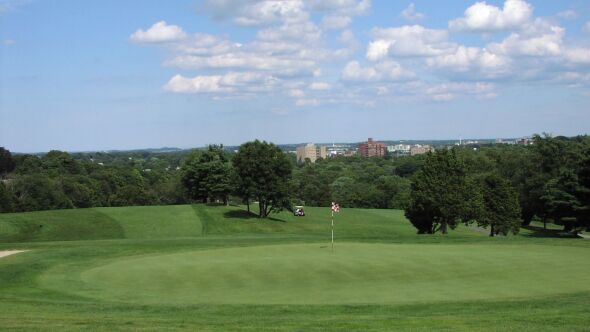 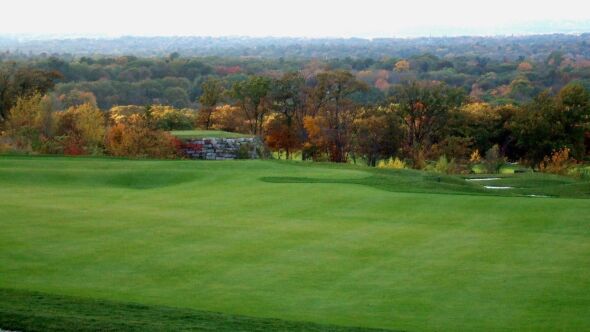 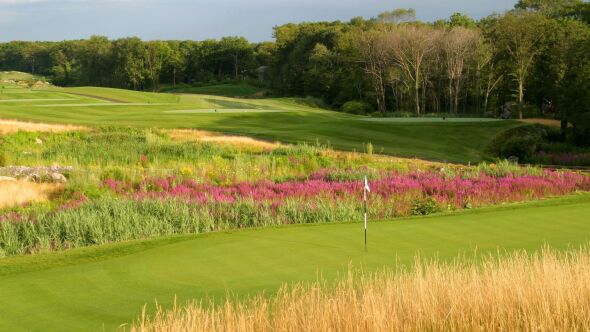 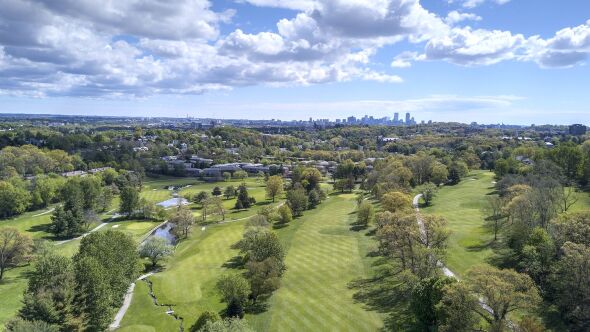 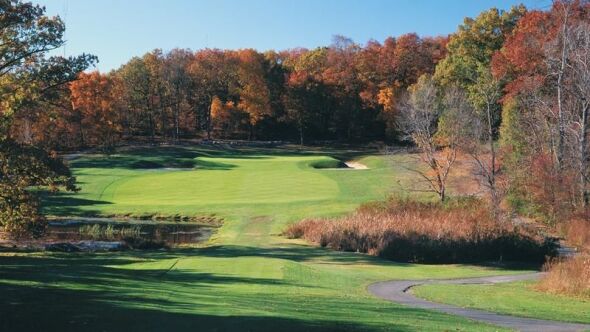 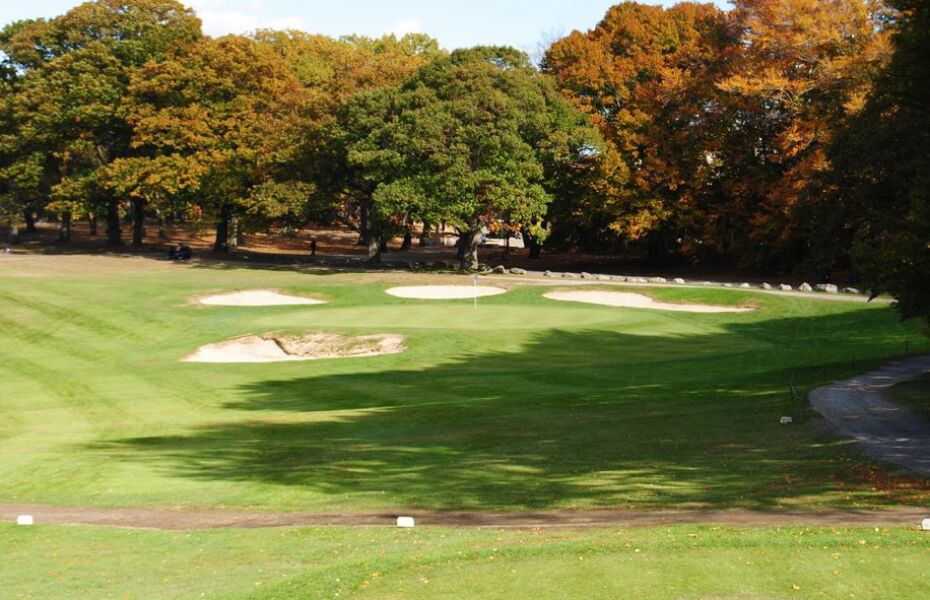 A view of green #8 from William J. Devine Golf Course at Franklin Park 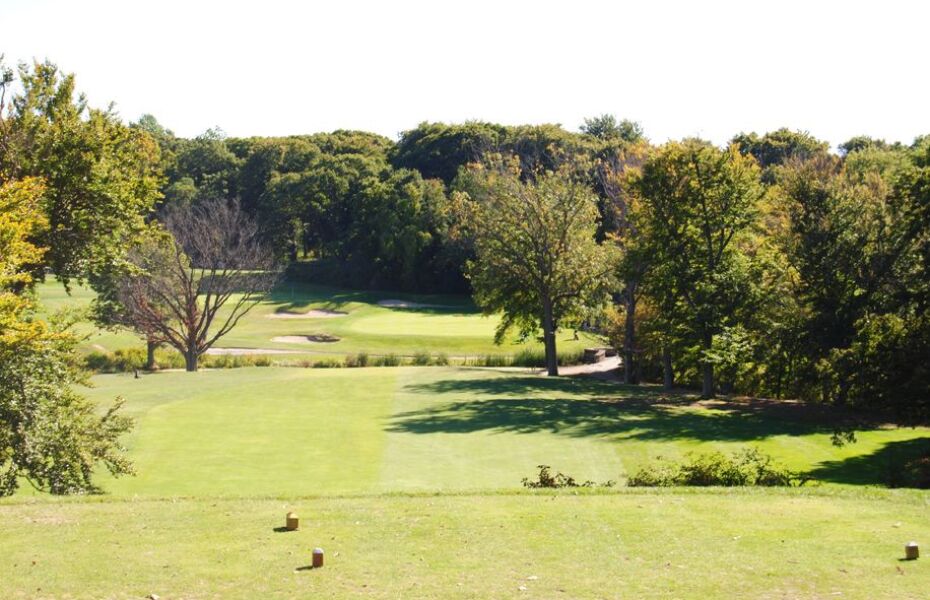 A view from tee #16 at William J. Devine Golf Course from Franklin Park 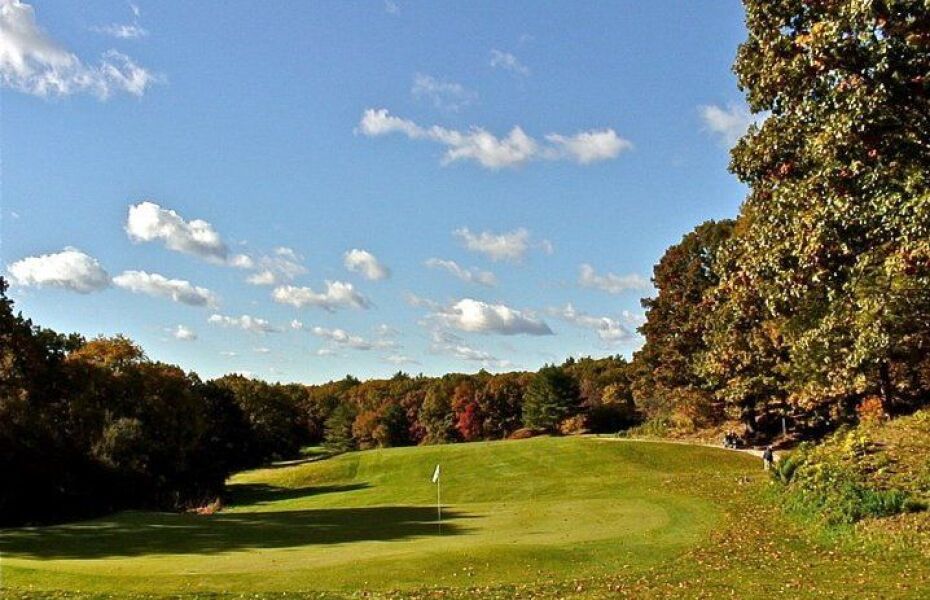