Dana Fry was on the golf team at University of Arizona and a year away from graduation when he took a summer job, flagging cacti for transplant at a course that Tom Fazio was building in Tucson.

More than three decades later, Fry is one of the most creative and successful golf course architects in the world, running Fry/Straka Global Golf Course Design.

A majority of the most recognizable courses on Fry's resume were done in collaboration with Dr. Michael Hurdzan, who he joined forces with in 1988. They include Golf Magazine top 100 U.S. courses Calusa Pines in Naples, Fla. and Erin Hills in Wisconsin, site of the 2017 U.S. Open.

Some of their other acclaimed works include Bully Pulpit in North Dakota, Naples National in Florida, Shelter Harbor in Rhode Island, Lassing Pointe in Kentucky and Ironhorse in Kansas.

Six Hurdzan-Fry courses are among Canadian Golf Magazine's top 100 including Devil's Painbrush and Devil's Pulpit, located five miles apart in Caledon, Ontario, but with vastly different signatures: One is links style, the other parkland.

Fry was with Fazio for only five years, but was instrumental in the creation of gems such as Wade Hampton in North Carolina, Barton Creek in Austin, Texas, and Lake Nona in Orlando.

At many of these courses, Fry has made his mark with artistic bunker schemes which vary from course to course.

"I have tried very hard the last 20 years to constantly change the style of my bunkers and not have repeating themes," Fry told GolfClubAtlas.com in 2009.

Fry's courses have lots of bold, memorable touches. At Devil's Paintbrush the par-5 eighth is one of the most unique, multi-option holes in golf, with a stone ruin in the middle of the fairway and a 60-yard wide sod wall influencing the approach.

In 2012, Fry opened his firm with another Hurdzan disciple, Jason Straka, and the two are busy with many overseas projects. After living in Hong Kong for five years in order to conduct business in Asia, where golf course construction is booming, Fry moved to Florida in 2013. 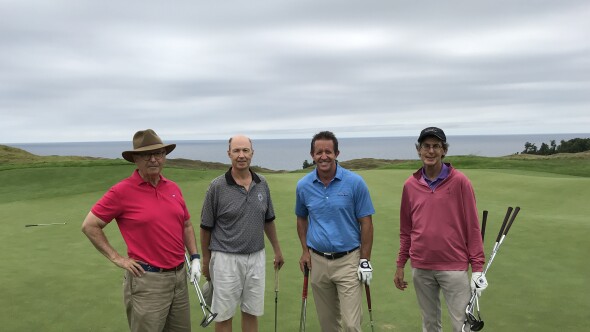 Recent Articles
What golf's 'Patio-gate' episode of 2023 reveals about the limits of change in a centuries-old obsession
WM Phoenix Open: a hole-by-hole guide to the Stadium Course at TPC Scottsdale
10 best Tom Weiskopf golf courses
Golfzon Leadbetter Academy opens at Reunion Resort outside Orlando
The second wave of the hottest new golf clubs for 2023
February 2023: Secrets From The World of Golf Travel
Now Reading
Search Near Me