Anatomy of a brilliant golf hole: the 12th at PGA Village's Dye Course 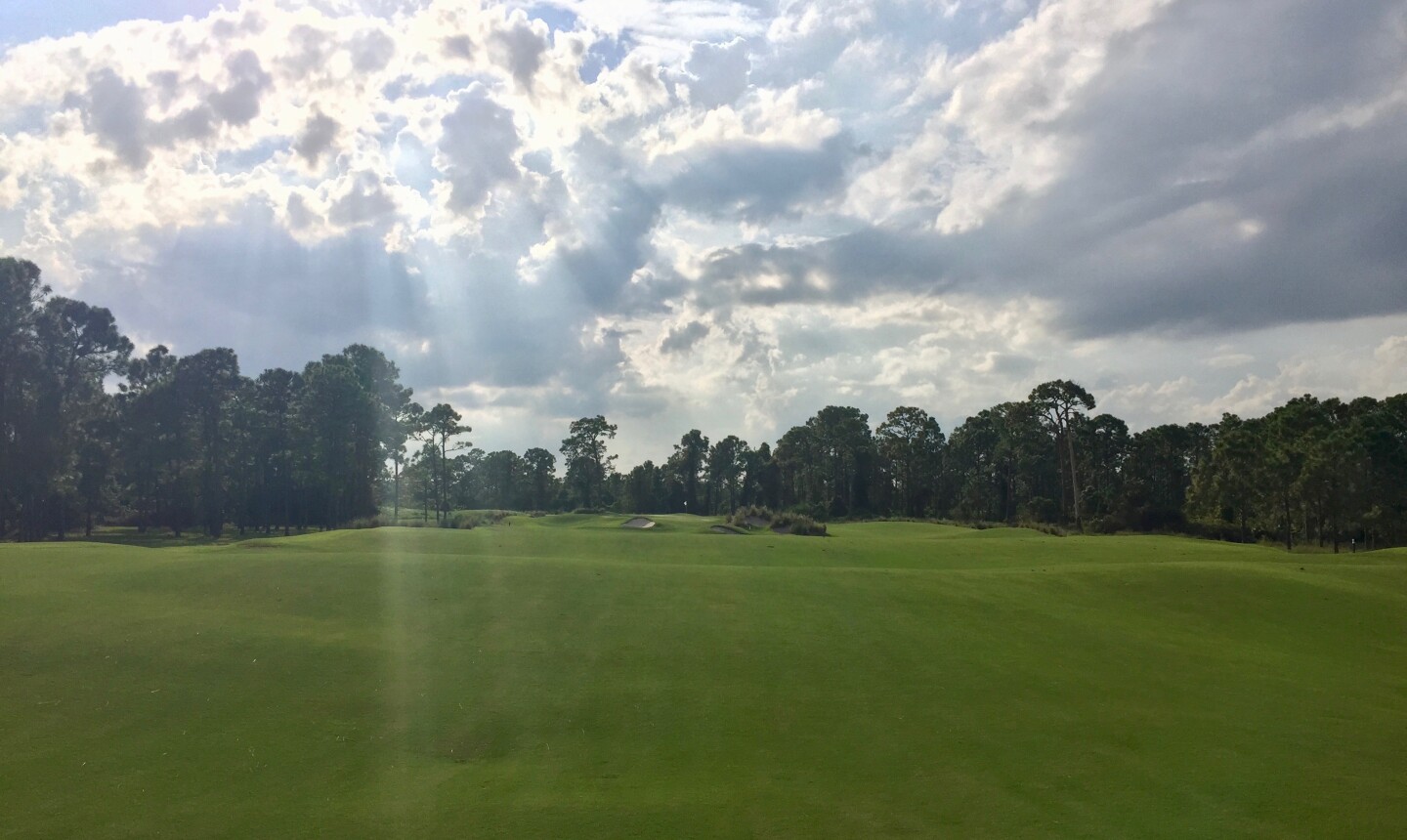 Later this month, Pete Dye will turn 92 years old. His career in golf course architecture needs little introduction: after six decades' worth of boundary-pushing, pot-stirring and championship-hosting designs, his mark on the game is legendary.

The list of influential Pete Dye courses, public and private, is longer than a three-shot par five. And to be honest, this list doesn't even really scratch the surface, because Dye's "B-sides" include some seriously underrated layouts.

One of them happens to be about half an hour from my house: the Dye Course at PGA Golf Club in Port St. Lucie, Florida.

And in honor of Pete Dye's contributions to the game, as well as Design Week on Golf Channel this week, here's a deep-dive into one of my favorites there: an underrated hole on a seriously fun course.

An aerial view of the 12th at PGA Village's Dye Course.

Drivable par fours are all the rage these days, especially on the PGA Tour. The 15th at TPC River Highlands in Connecticut, the 14th at Quail Hollow and the fourth at TPC Boston all provide thrilling playing and viewing experiences because of the real potential for scores from eagle to double bogey or worse. Championships have been won and lost on these short, tempting holes.

But drivability is not necessarily required for a great short two-shotter.

Overlooked in this trend toward eagle-dangling dangerous par fours is their slightly bigger brother: the "drive-and-pitch" or "wood-and-wedge" hole. Out of reach off the tee for anyone not named Dustin Johnson, it's the type of hole that, when thoughtfully conceived, can drive a golfer to distraction because of the myriad ways one can play it.

It's also a hole where everyone - particularly higher handicappers - has a real chance to card a birdie, while a tactical or execution mistake by an accomplished player can easily mean bogey or worse.

The tee shot on the 12th looks like the easiest on the course. And it probably is, unless you're serious about making a birdie.

In truth, there's not a whole lot to see here, but that's part of the 12th's charm. Pete Dye holes tend to overstimulate golfers with elaborate bunkering, which can sometimes create an almost lunar look. This hole, by comparison, can be as easy off the tee as the golfer chooses, as the fairway is a steady, straightaway 45 to 50 yards wide through the landing area. The fairway actually plays even wider than this, because tee shots landing near the edges tend to bounce back toward the middle. The flat-bottomed sandy waste areas on either side will catch a truly poor tee ball, but recovery from here is not too difficult because the sand is pretty firmly packed.

But this relatively benign view is not a license to swing indiscriminately, especially for golfers who want to make a birdie. What becomes clear after playing this hole multiple times is that playing to either side of this fairway is better than playing up the middle. As with many great golf holes, the hole location should dictate the plan for the tee shot.

So, how should the golfer approach this green?

My analysis: if the hole is on the front and/or right portion of the green, a tee shot up the left side of the fairway is best. If the hole is pretty deep into the green, it's better to attack from the right side.

(Note: Luckily, the GPS in the carts at PGA Village includes specific hole locations, so if you can't quite tell from the tee, the screen in your cart should help guide your decision.)

What is easy to see is that the middle of this fairway is not ideal for making a birdie, due to the a cluster of three centerline bunkers scooped out of a mound about 60 yards short of the green. This feature is derived from a similar one in the fairway of the 16th hole at The Old Course at St. Andrews, called the "Principal's Nose" and which Golden Age architects like Charles Clair Macdonald and Seth Raynor imitated in their classic designs.

Dye's Principal's Nose here is similarly meddlesome. A player who pulls driver and pipes it down the middle without thinking will end up behind this feature with a blind approach from the middle of the fairway.

A long, straight tee ball can lead to this awkward view.

By contrast, here's what the approach looks like from the margins of the fairway:

To this day's hole location, an approach from the left is very straightforward...

...whereas from the right, the shoulder of the green is enough to sow doubt in the player and force him or her to the middle of the green.

Both of these are preferable to a center approach, but to this hole location, the left-side look is better (that pot bunker is a good eight yards of the green). Because the green is angled slightly from front-right to back-left, a hole cut farther back in the green becomes easier to attack from the right side of the fairway. This adds intrigue to the hole because it plays differently one day to the next.

Greenside falloffs and chipping areas abound at the Dye Course, and the 12th green complex contains some of the most pronounced on the course, which is fitting because of the hole's modest length. A poor swing with a wedge or short iron can mean a tough up-and-down from three or four feet below the surface of the green. This danger heightens the reward for a good shot, and gives the golfer a sense of accomplishment when approaching a makeable birdie putt.

Since players are hitting short clubs into the 12th, missing the green is a more severe mistake than usual.

There are a ton of 340-yard par fours out there, but the strategy for playing most of them tends to be obvious and one-dimensional: hit a solid tee shot, try to wedge it close and maybe make a birdie putt.

What makes the 12th at PGA Village's Dye Course brilliant is that it looks that simple at first (and can be for higher handicappers for whom par is an accomplishment), but the experience of playing it reveals more than meets the eye. It's not a "signature" hole, but it's one that makes the course one of Florida's most enjoyable.

What are some of your favorite short, non-drivable par fours? Be sure to let us know in the comments below!