At the TPC Louisiana near New Orleans, you'll have to earn your money from the sand 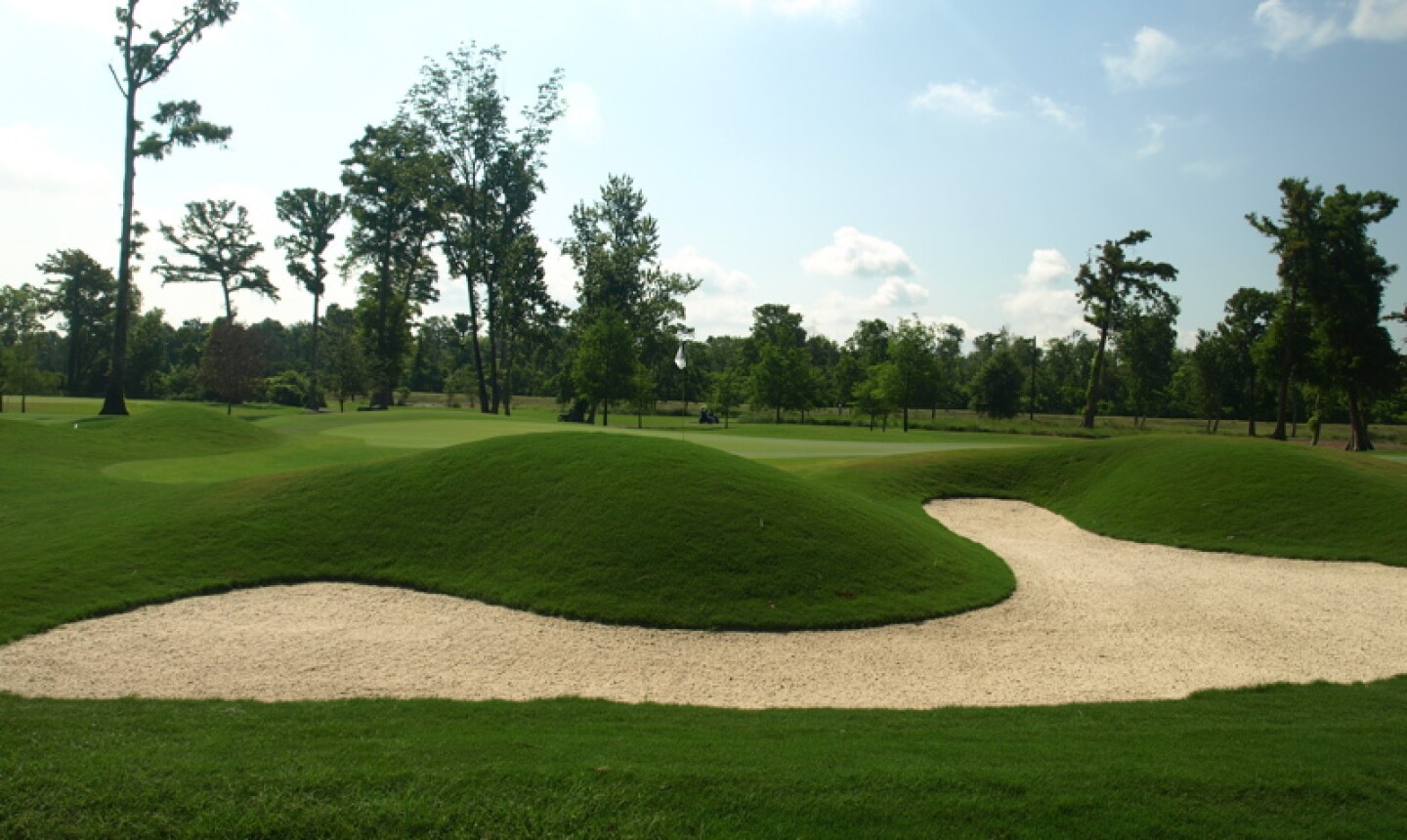 On the first hole you get a feel for Pete Dye's bunkering at the TPC Louisiana in Avondale. Mike Bailey/Golf Advisor 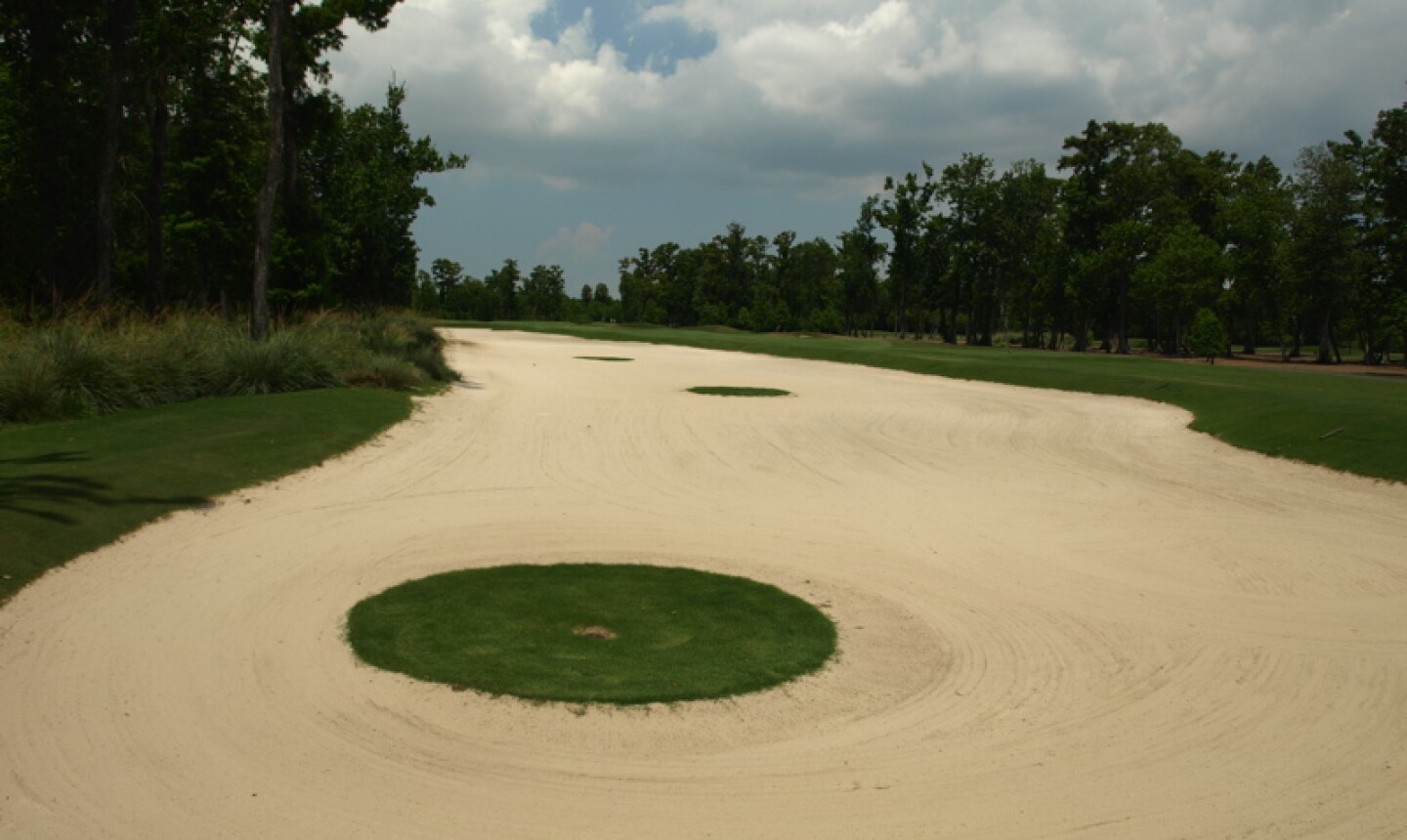 A huge fairway bunker on the 15th at the TPC Louisiana in Avondale has six small island fairways in it. Mike Bailey/Golf Advisor 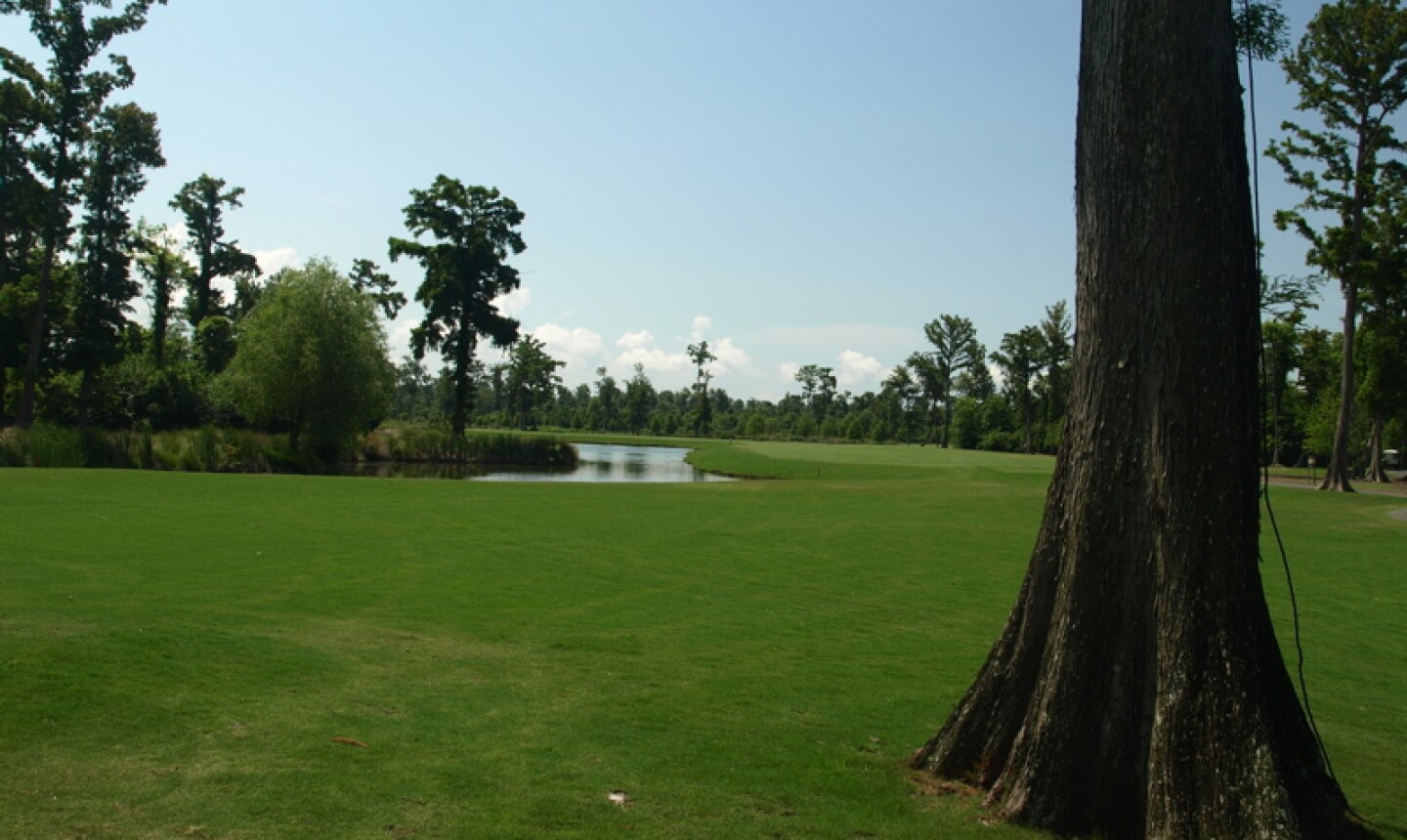 The tough and long par-4 sixth at the TPC Louisiana wraps around a lagoon. Mike Bailey/Golf Advisor

AVONDALE, La. - Ever played with one of those guys who is so good out of the bunkers that he sometimes hits in there intentionally to collect on sandies?

Well, that guy could make a fortune if you were playing junk at the TPC Louisiana.

As you might expect, the Pete Dye-designed TPC Louisiana golf course has plenty of sand: 103 bunkers to be exact. And if you play double sandies, which is hitting it in two bunkers and still getting it up and down in the end for par or birdie, there are many opportunities at the TPC to make a little money.

Dye, with the input of player consultants Steve Elkington and New Orleans native Kelly Gibson, put bunkers everywhere. They are in the landing areas and around the greens; but more than anything, many of the bunkers are extremely large, like football fields. And 62 are pot bunkers, so many are at least one-shot penalties.

Other than that, there's not much to contend with on this par-72, 7,520-yard golf course - except for the mounds, water, small greens and towering pines and cypress trees.

In other words, there's trouble everywhere on the PGA Tour's Zurich Classic host.

It's hard to believe that this was once just a flat piece of swampland next to New Orleans. But in true Pete Dye fashion, earth was moved to create mounding, lakes, lagoons and 20 acres of bunkers and waste bunkers.

No wonder, when the course opened in 2004, Dye quipped that PGA Tour Commissioner Tim Finchem "finds a flat site, and then he calls me.

"But I appreciate the confidence he has in me, " Dye said. "And, what the heck, I still love digging in the dirt."

Despite all its trouble, the TPC Louisiana, part of Louisiana's Audubon Golf Trail, plays hard and fast. In other words, don't be intimidated by the yardage, even from the tips, which is 7,400 yards for non-tour players.

But patience here is a virtue. Miss it on the correct side of the greens, and you've got reasonable up and down opportunities. Find a bunker, and things get tougher, even on greenside bunkers, which are often set away from the green with a chipping area in between.

Dye is famous, of course, for the island green 17th hole on the Stadium course at TPC Sawgrass in Florida, but what about island fairways surrounded by sand, not water?

That's exactly what you'll find on the 1ong par-4 15th. Off the tee left of the fairway, there's a 150-yard bunker with six small islands of turf in it. Chances are you won't find grass if you hit your ball in there, but you won't soon forget it either.

Oddly enough, in this area where water is plentiful, none of it is natural on the 250-acre TPC; but it is bountiful. It plays prominently on the par 3s. On the ninth and 17th, which are similar in shape and length, water runs all down the left side. On the 18th, which plays 585 yards from the tips, it's down the entire right side of this dogleg right.

It should be no surprise that the range, practice greens, practice bunkers and chipping greens are in superb condition.

In the golf shop, you'll find a good selection of apparel and equipment and logoed merchandise from the Zurich Classic.

TPC Louisiana was one of many properties in the New Orleans area to suffer from Hurricane Katrina in 2005, but it has rebounded nicely.

The golf course suffered widespread flooding and thousands of downed trees, forcing the property to close. The clubhouse also was renovated as the tournament returned to TPC Louisiana in April 2007 after being played at English Turn Golf and Country Club for a year.

Typical of Dye, this is a thinking man's course, but that will do you little good if you can't control your ball with all the trouble out there. Come with a plan and good golf swing and you'll enjoy your time.

TPC is also well conditioned, as you might expect of a course that charges $110 plus. Some of the holes do look similar to one another, but there are plenty you won't soon forget.

The 478-yard sixth is one of them. It's a tough dogleg left around water that makes par a real feat. The 16th is a good, short par 4 playable many different ways, including hitting driver to get it on or in front of the green, with water and sand looming to catch errant shots.

Five different tee configurations accommodate various skill levels. Although even from 5,100 yards, the bunkers and water are still there.

Mike Bailey
Mike Bailey is a senior staff writer based in Houston. Focusing primarily on golf in the United States, Canada, the Caribbean and Latin America with an occasional trip to Europe and beyond, he contributes course reviews, travel stories and features as well as the occasional equipment review. An award-winning writer and past president of Texas Golf Writers Association, he has more than 25 years in the golf industry. Before accepting his current position in 2008, he was on staff at PGA Magazine, The Golfweek Group and AvidGolfer Magazine. Follow Mike on Twitter at @MikeBaileyGA and Instagram at @MikeStefanBailey.
0 Comments
Related Links
More from the author

Tim Gavrich
Senior Writer
Now Reading
At the TPC Louisiana near New Orleans, you'll have to earn your money from the sand
Search Near Me