Mowing matters: How Augusta National gets its look

The extraordinary effort that presents a flawless, green Masters

It’s called “the Augusta National syndrome” and it’s the reason golfers dream of playing the home of the Masters. Each year, as much of the country climbs out of its wintry blanket and awaits the greening up of their golf courses, we’re treated – some might say, tortured – by visions of a verdant Eden. Even in the South and Southwest, where they have been playing golf all winter, there’s something idyllic about the image of those pristine fairways and greens.

Accompanying those wistful fantasies is the question, “why can’t my golf course look like that?” And that’s when the soft-focus beauty of the Masters becomes something of a weapon used against most everyday superintendents and course managers. Because measured against that image, 99% of golf courses look like something’s gone awry.

Of course, the answer goes, it helps having about three times your average budget for a high-end facility. Plus an army of machinery supplied by nearly every major manufacturer. And a full-time staff three times a standard crew that’s supplanted by 100+ volunteer superintendents in the run up to the event who contribute their time and labor for the good of the game and for the resulting feel of genuine collegiality.

There’s more to it than that. Like a golf course that’s only opened half the year, because it’s closed down during the warm season, without a single round of golf ever being played on its native Bermudagrass turf cover. Those pristine fairways we gaze at longingly in April are “installed,” so to speak, in early fall or so and removed a few weeks after each Masters when the club closes down for its annual repair work and tweaking of the golf course.

Think of those fairways as a carpet put down for the occasion and then removed when the guests leave. You’re looking at an overseeded bed of perennial ryegrass that replaces the indigenous Bermudagrass. It’s pure enough seed so that contamination with Poa annua is not a problem – thus there are no splotchy areas or anything off color of whatever Pantone number they have achieved out there.

Jeff Gullickson, a veteran certified superintendent (CGCS) from Kalispel Golf & Country Club in Spokane, Washington (formerly the Spokane Country Club) is fond of explaining that “golf is televised agriculture.” It’s a great shorthand for what makes the game’s playing fields so special. In this case the crop is a flawless cover of grass.

The folks at Augusta National responsible for producing that playing field are notoriously close-mouthed about what they do. That extends up and down the chain of operation, including those visiting greenkeepers who pledge to remain silent about whatever goes on there.

But it’s possible to figure out what’s going on there if we simply assume that it’s an intensive form of what superintendents do everywhere when they are backed by sound science and have the means to practice it.

For one thing, there are miles of subterranean drainage pipes out there to help the ground absorb water and get it off the surface. The drainage process is aided at the green by the reliance, occasionally, upon mechanical SubAir systems that are capable of creating a vacuum effect to draw out the water. That mechanized process has been extended out beyond the greens to include low-lying surrounds, approaches and crosswalks, among other places.

Even with the heavy rains that befell the region since the fall and that continued during the practice round days this week (up to 3 inches of rain), the place has come through much better than most golf courses. Yes, the fairways are a little softer than normal and they are not running out as much. But overall it has handled the deluge well.

In the case of the overseed, there was a lot of replacement seeding needed to cover up areas that had washed away. But somehow, this club manages to get those things right, and that’s evident in the uniformity of the playing surface.

As for the fairway look, they are different than most other clubs in that they do not sport stripes, patterns or even the classical split of a half/half mow, The mowing pattern of these fairways is unidirectional – towards the tee. That’s done to enhance the simplicity of the look.

Players and the public have often speculated that the unidirectional mowing towards the tee is designed to slow down the golf ball. That might have some validity for other types of grass with larger, coarser blades – like Bermudagrass or Zoysia. And it might hold if the fairways were cut at a height exceeding one-half inch. But at a height of cut closer to 3/8ths of an inch (0.375-inch) there is no grain on the ryegrass – or none that scientists have been able to determine has any effect on ball roll. At least that’s the understanding of the various turf experts with whom I spoke – all on the basis of confidentiality. A full scientific investigation of this is being undertaken by the USGA Green Section and will be published later in the year.

Having some idea of how Augusta National’s decision makers think, I suspect that they quietly revel up in the clubhouse about the likelihood that some players out there think they are being thwarted. In other words, one effect of the mowing pattern is that it leads people to think – despite the absence of evidence – that they are being denied yardage on the ground and therefore have to hit it harder to get to a desired landing area.

If that’s the case, great. It’s just one of many areas where this golf course exercises a hold on the imagination of golfers.

Who knew televised farming could be so much fun? 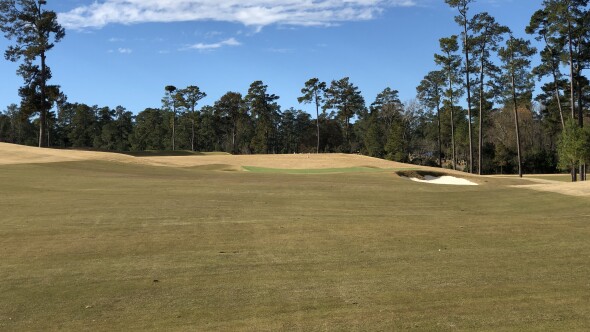 Articles
Ask Brad: Augusta's good neighbor
What's it like being the course next door?
2 Min Read 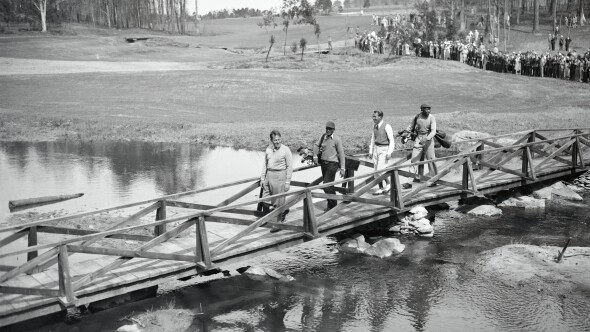 Articles
Guarded change, evident results at Augusta National
Notable moments of evolution at the home of the Masters
5 Min Read 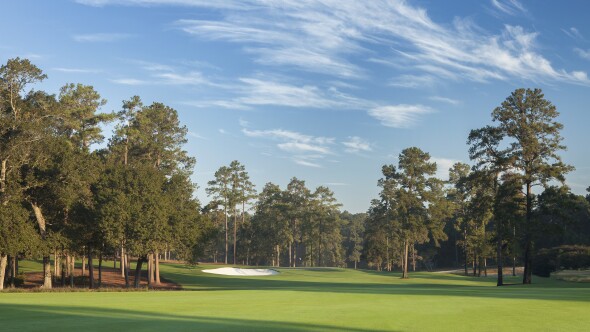 Articles
Your course will never look like Augusta -- and that's okay
With an assist from some of the top superintendents in the business, here's 10 reasons it's unreasonable to compare your home course to Augusta.
4 Min Read

When players are marking their ball overnight at this masters, how do the greens keepers mow without disturbing the markers?

what can i do too make my lawn really looking great nice green. i live in illinois and i aways baby my lawn its really green til about july when it get dry and hot. what can i do too keep it greeen and healthy right now my lawn is thick and very green no weeds at all. people hate me because my lawn looks so good. i treat treat once a month til end of december and i try too treat it just before snow fall i start cutting my lawn in mid march and my people here hate my because my lawn is aways some what green in the winter months. what can i do to make it look good in the hot season ?? help thomas crsain normal,ill

It’s not a maintenance shed, it’s an actual facility...

Thanks for the interesting read. I think most sensible golfers realize their home course will never look like Augusta. The amount of money and labor that goes into the green conditions at AGNC is insane! It's fun to see once a year, but I think the current state of golf design and agronomy leaning towards sustainability (i.e. Pinehurst, Trinity Forest and many others) is obviously the way to go.