Notable moments of evolution at the home of the Masters

Here’s one measure of how secretive Augusta National Golf Club is about making changes to the golf course: Any contractor, consultant or architect who works on the place is not allowed to talk about the process or what they have done.

In fact, so protective is the club that specialists who work on the course have to sign a non-disclosure agreement – and it’s an NDA that covers whether they have signed an NDA. When asked directly if he’s signed such a provision, one prominent consultant gave the stock response, “I can’t answer that.”

But if the process is guarded the outcomes are not. That’s evident to anyone who examines how the golf course has evolved since the club debuted the first Masters in 1934. Among the most consequential changes to the original layout designed by Alister MacKenzie and Robert Tyre (“Bobby”) Jones have been the following:

The original routing had the nines reversed, which is how the inaugural Masters was played in 1934 – with play starting on the present 10th hole and ending on the present 9th hole. But the lower-lying holes proved slow to warm up in the morning and so the nines were flipped to their present rotation in time for the second Masters, providing much more drama, as it turned out, starting with Gene Sarazen’s albatross on the par-5 15th hole in the final round to tie Craig Wood whom Sarazen beat the next day in a 36-hole (!) playoff.

The only remaining original bunker bearing MacKenzie’s trademark elegance is short of the green on the par-4 10th hole – a bunker that rarely if ever sees any play anymore. It used to be greenside, but in 1937 designer Perry Maxwell moved the putting surface 70 yards up the hill on a natural knoll to its present location, creating a 470-yard hole, eventually lengthened at the tee to 495 yards.

It was also in 1937 that Byron Nelson drove the green on the 335-yard par-4 7th hole. That was enough for club officials, who redrafted Maxwell to take the previously unbunkered green and push it up the hill 35 yards back and surround it with more bunkers – five in all – than found on any other green on the golf course.

The old par-3 16th hole was a 140-yard shot in a very different position than today’s hole. It was played from right of the 15th green across a creek to a green left and beyond the existing one. That little hole disappeared in 1946-47 under the tutelage of Robert Trent Jones Sr., who created the present 170-yard hole that plays astride a newly created pond.

Most of the changes at Augusta National could be argued for as improvements. Not so what happened to the green on the par-5 8th hole. This was a very MacKenzie-esque green, with progressively bigger and steeper mounds – peaking out at 17 feet - as the only defense to this elongated, unbunkered putting surface. For reasons that defy reasonable explanation, the club had the green complex completely redone in 1956, supervised by Byron Nelson, who produced a lifeless blob of a putting surface without mounds that sat there like a latke in dead open space. The only benefit was visibility for golfers and spectators, though what they got to see saw was a parody of modernistic heavy-handedness. It remained that way until the 1979 Masters, when the putting surface and surrounding mounds reappeared in restored if attenuated form.

8th hole through the years 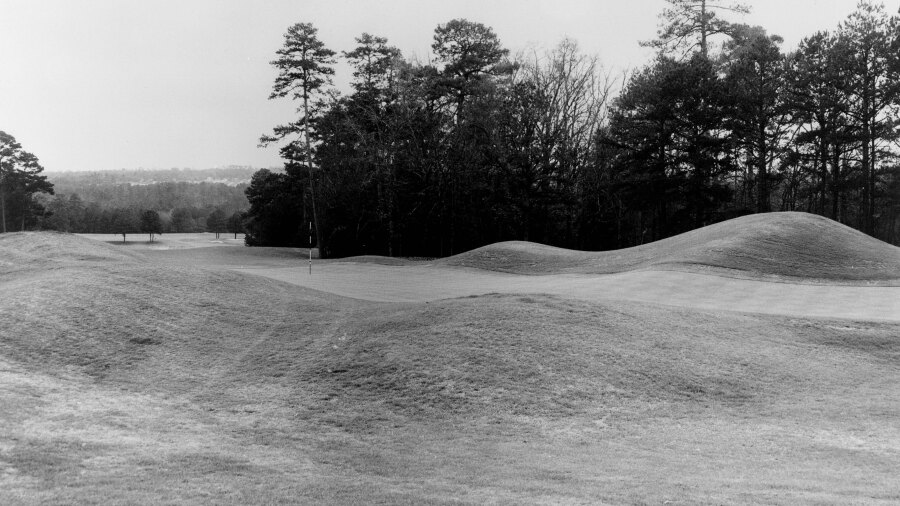 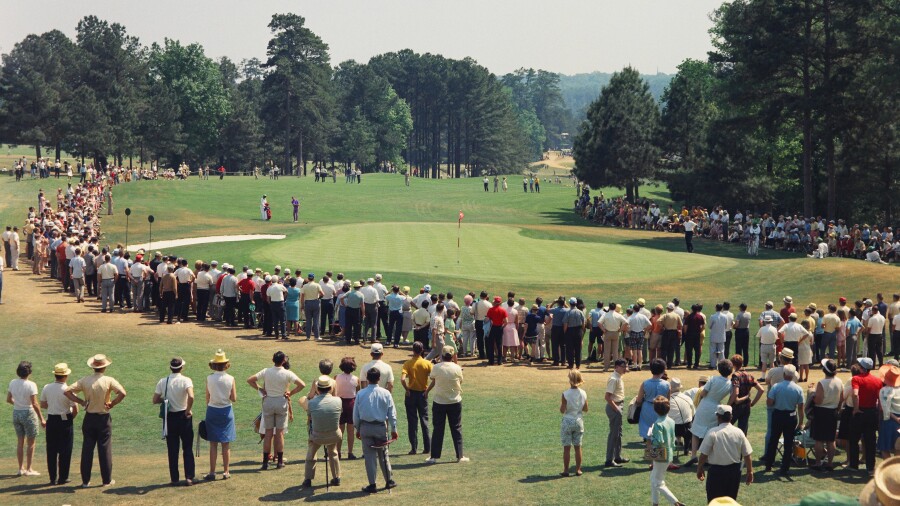 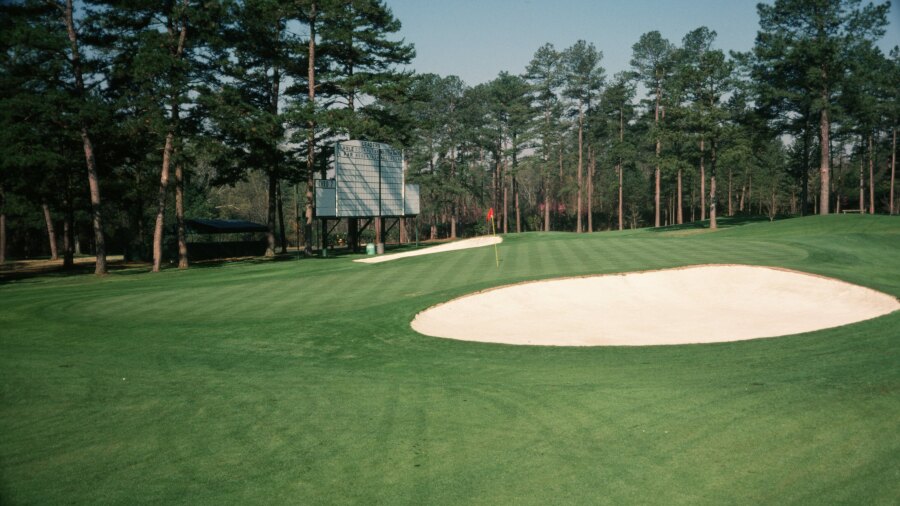 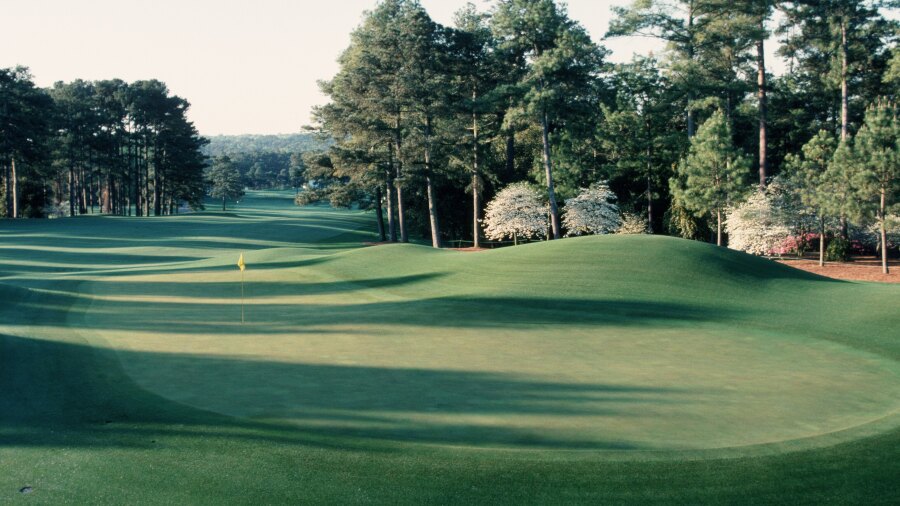 General View Of The 8th Hole In 1995. Augusta National/Getty Images

From Bermudagrass to bentgrass greens

Everyone likes to talk about the lightning-quick greens at Augusta National. But that’s a relatively modern development. As late as 1977, the greens averaged only 7 feet, 9 inches during the second and third rounds of The Masters - this according to statistics recorded by the USGA Green Section when testing a new, prototype Stimpmeter. That all changed for the 1981 Masters, when the greens were converted to bentgrass, allowing more consistent ball roll and increased speeds.

No official numbers are available from Augusta National on such matters, but a fair estimate is that now those greens roll in the range of 12.5-13.5 on the Stimpmeter. And that’s on a flat putt. Add in the matter of the notorious slopes out there and you have some putts – such as one from top right on the 16th green to Sunday’s traditional pin lower left back – that require all but a nudge to roll out 60-70 feet.

Augusta National used to be considered a long course. As early as 1939 it measured out at 6,800 yards. When 21-year old Tiger Woods eviscerated the 6,925-yard long course in 1997 with a tournament-record score of 18-under par, he never hit more than a 7-iron into a par 4 and was reaching some of the par-5s with short irons. Plans were set in place for stretching the course with new back tees. Nine new tees in 2002 added 285 yards. By 2006 the installation of seven more back tees created a course measuring 7,435 yards. This year a new back tee on the par-4 5th hole adds another 30 yards, creating a 495-yarder and a total to the course of 7,475 yards.

They’re not done. They never will be. There’s a metal filing cabinet in the club offices with pullout drawers for plans for the next 20-30 years of every hole. Speculation abounds, and consulting architect Tom Fazio is among many involved with the club who won’t say what’s next. The first guess falls immediately on the par-5 13th hole, now measuring only 510-yards and occasionally reachable with a short iron. The acquisition of a five-acre parcel behind the tee from neighboring Augusta Country Club raises the possibility of adding up to 60 yards to the hole – making it very demanding to reach the turn in the fairway along an arm of Rae’s Creek that is the “go-point” for a second shot to the green.

Other candidates for change include using a forward (members) tee on the 350-yard third hole to make it a drivable par 4. Having clumsily added a lot of pine trees to tighten the landing areas of the lengthened par 4s at 7 and 11, the club could just silently acknowledge they goofed and remove those trees to restore more angles of play – and along the way considerably improve spectator sight lines. We might even see a new back tee on the famous short par-3 12th hole; stretching it from 155 yards to, say, 180 might put the 6-7-8 irons back in players hit that they used to hit here. This is a club that has a lot of internal land to work with – enough, say, to stretch out the par-5 2nd hole from 575 to over 600 to restore the strategic value of the slope by the fairway bunker on the right.

This is a golf course that doesn’t stand pat. They are alone as a perennial championship venue in terms of tradition, resources and ground to work with. Who knows? They have the capacity – and nerve - to pick up entire holes and move them. Or they might just be the first private club to initiate a tournament ball to put a stop to the endless tinkering in response to length.

One thing is sure. We won’t know about it until plans are well underway. 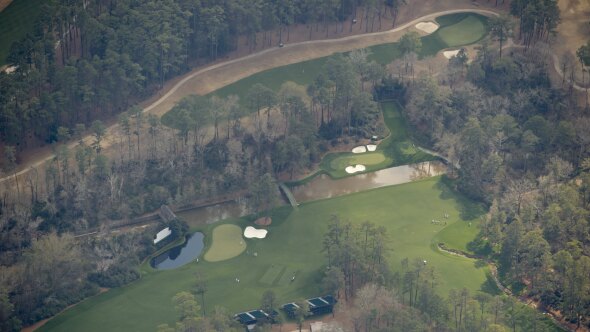 I think it is a great monumental step for Augusta National to host the new women's amateur tournament. The quality of play on the Master's Course was truly incredible from this new crop of very talented young ladies. I believe it is time for a LPGA Tournament to be played at Augusta National Golf Course, so the best women golfers in the world can showcase their great abilities. It would be interesting to see if they would set it up as another major tournament for the ladies, making it 6 majors on their tour.....

Do they reset the course record when they make the changes it seems not?

I appreciate all the comments, however I am just looking forward to seeing a beautiful golf course and professionals put to the test. These guys are at the top of their game and yet this course can still put a 13 onto a card! (S.G.)

Recently watched highlights of Jack Nicklaus' win in '86 at the Masters.
He hit a 6-iron from 162 yards on the par-3 12th!
Guys are hitting 9-irons and wedges today!
Yes, Augusta National should restore those mid (and long) irons to maintain the integrity of shot values from the past!
And remember, Nicklaus hit a persimmon head wood driver in those days!
And the golf ball more resembled technology from the 1960s!

How about going back to fairways everywhere? Back to no rough. It would be interesting to see where these bombers end up in that environment.

Excellent summary! Every year you think it cannot get better, and somehow it does.

Tournament ball sounds the way to go for me.