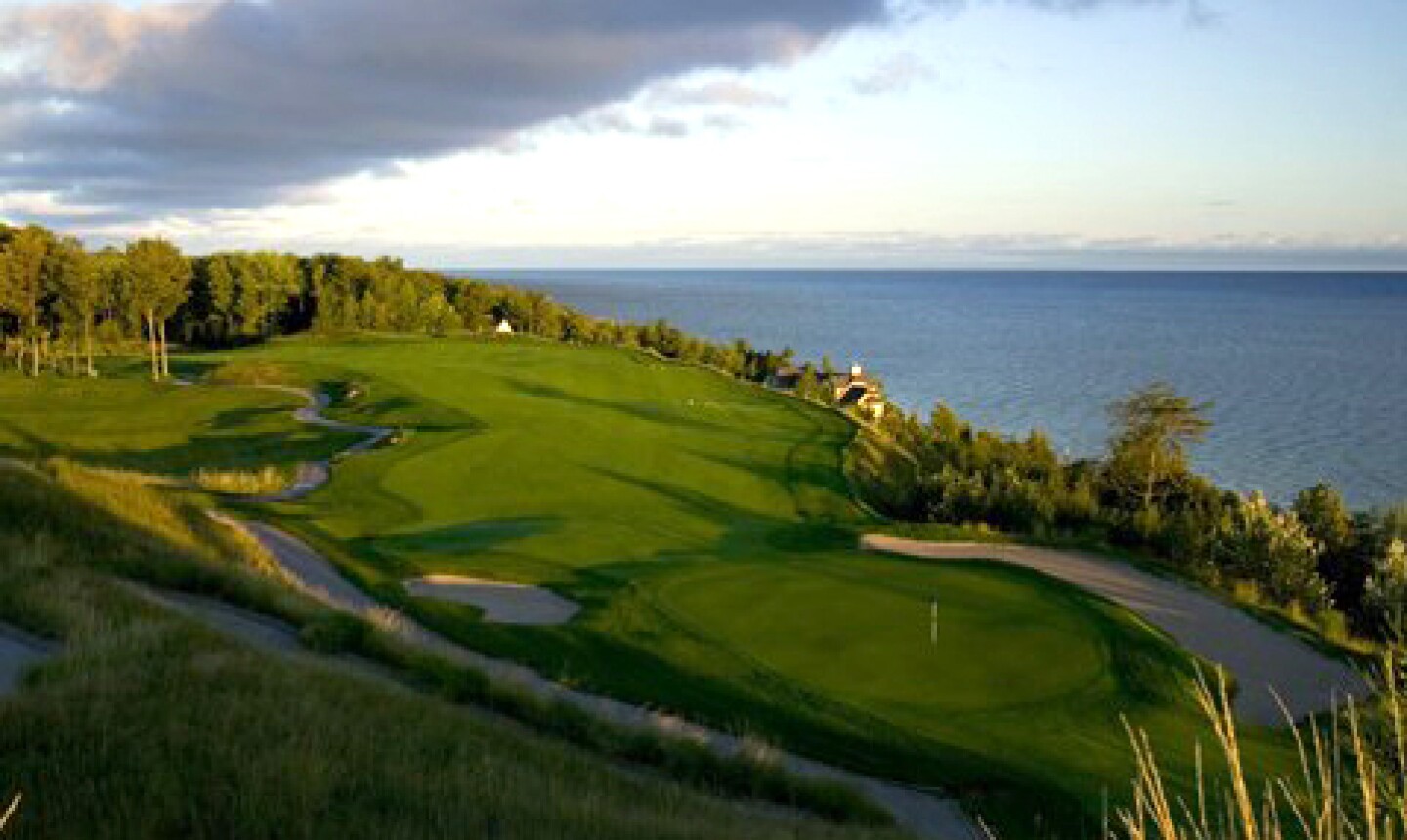 Bay Harbor in Northern Michigan is a must-play at least once. Courtesy of Brian Walters 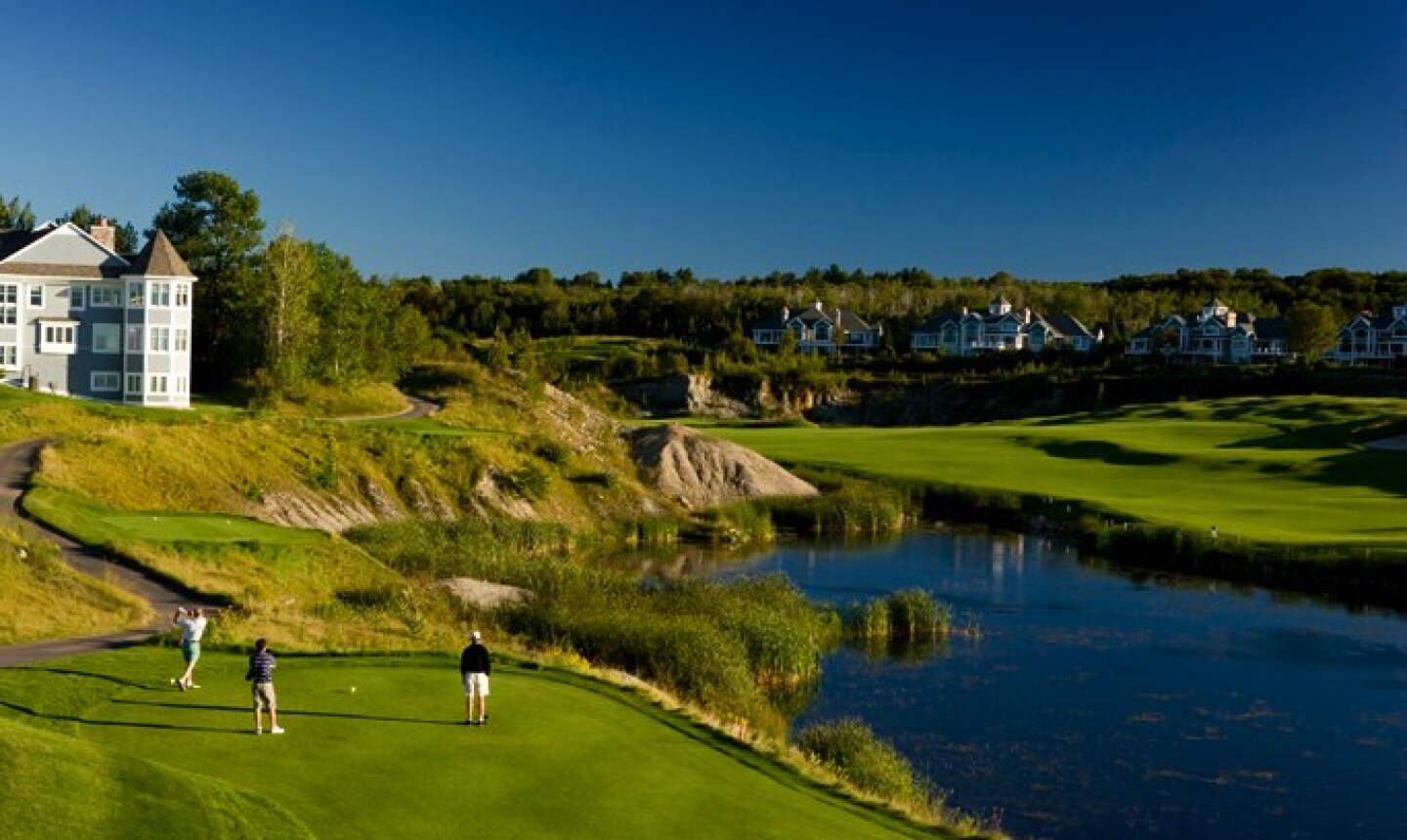 The fifth on The Quarry nine at Bay Harbor Golf Club is one of the more difficult holes on the course, with two water hazards and 468 yards to navigate. Courtesy of Brian Walters 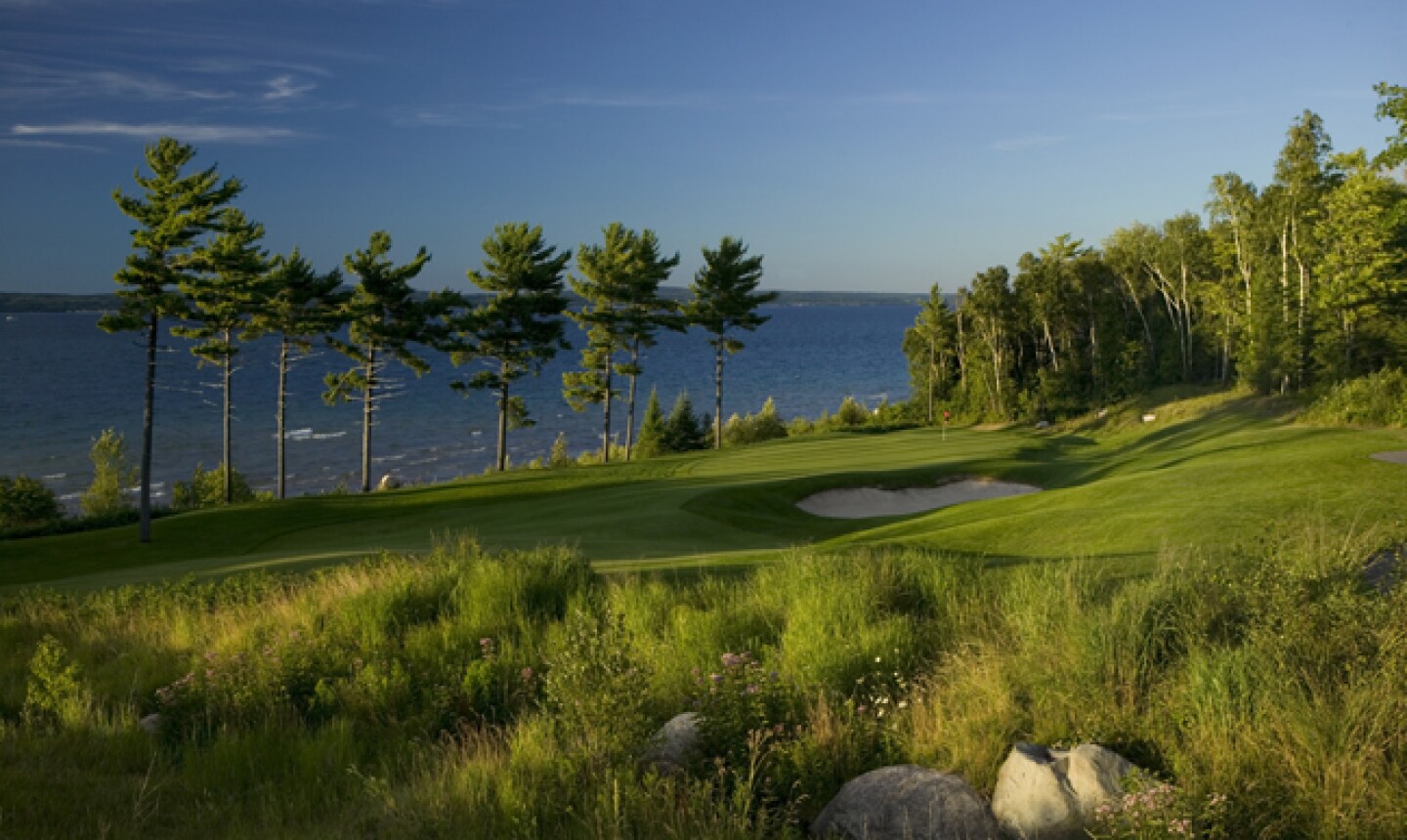 The ninth hole on The Quarry nine at Bay Harbor Golf Club bumps up against an expansive Lake Michigan. Courtesy of Brian Walters 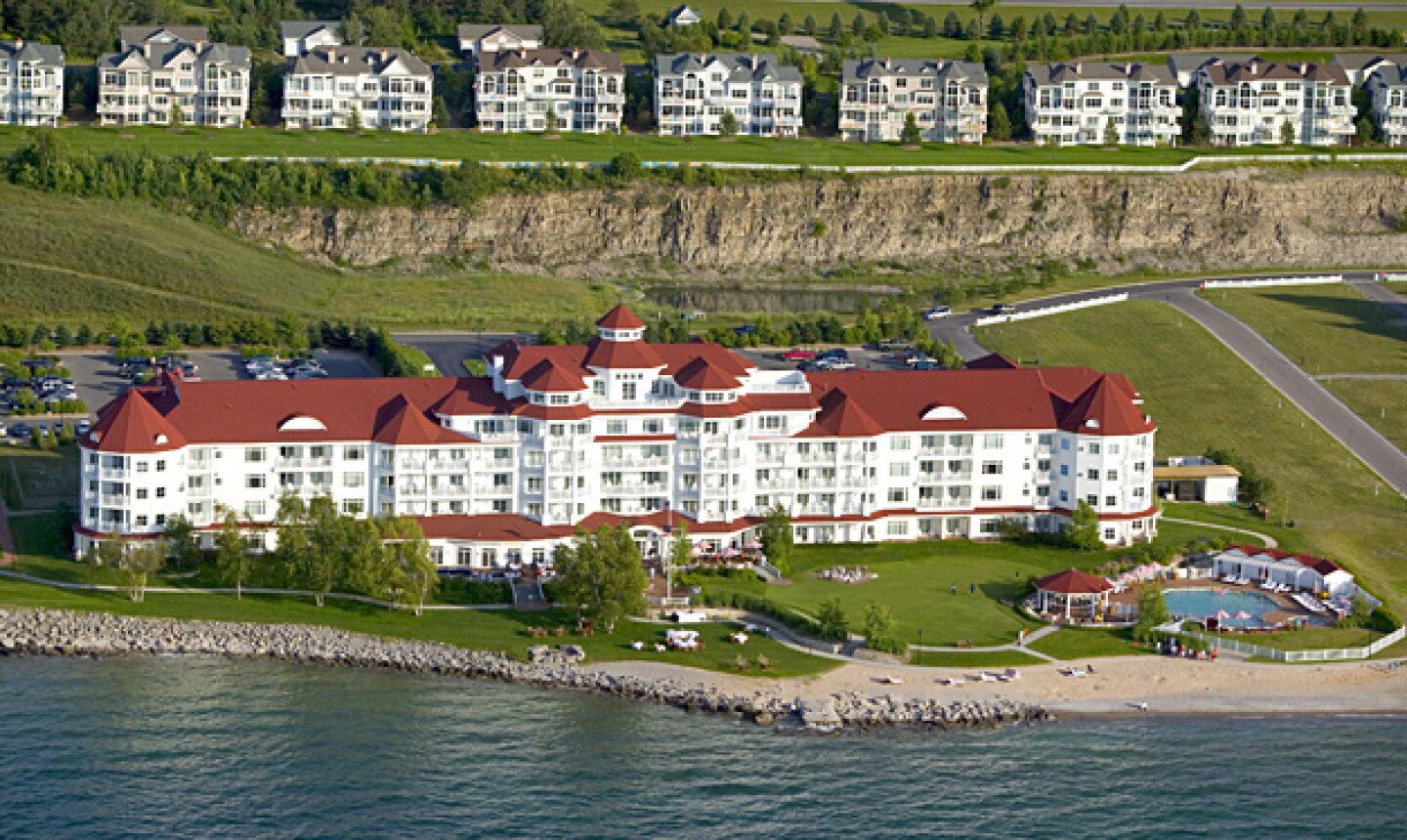 For the ultimate stay-and-play, check out the Inn at Bay Harbor. Courtesy of Brian Walters 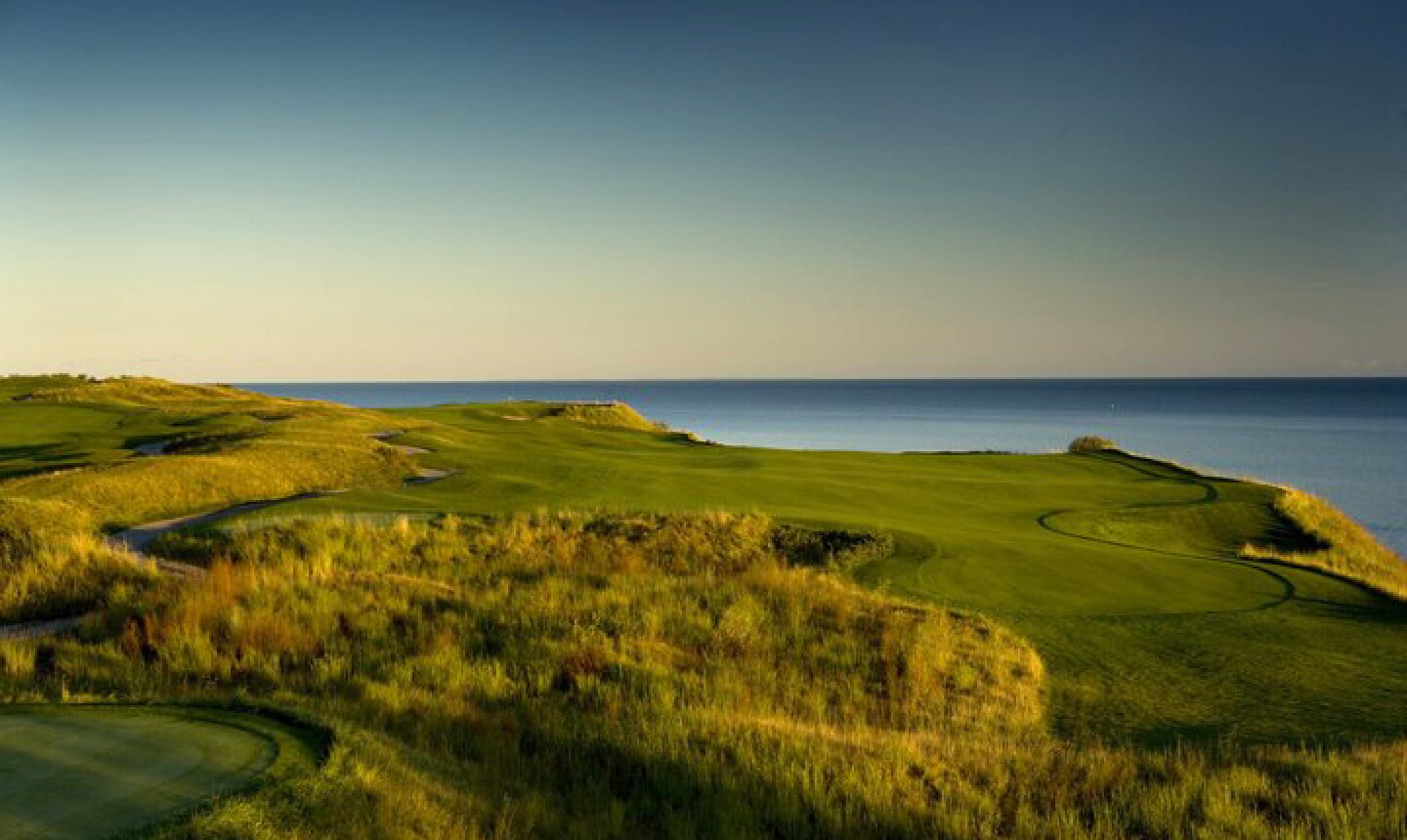 Bay Harbor in Northern Michigan is a must-play at least once. Photos by Brian Walters 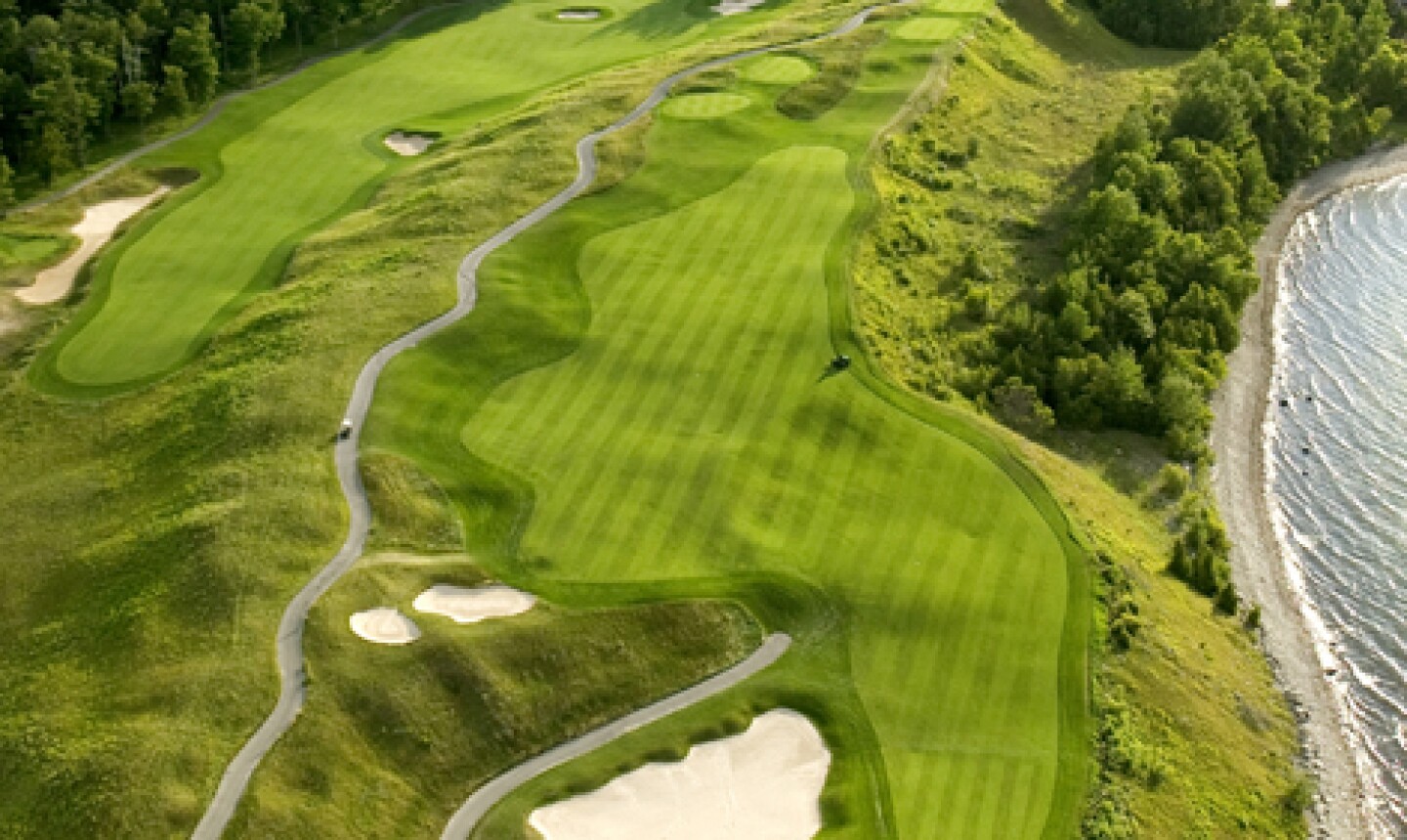 The third hole on The Links course at Bay Harbor Golf Club is perched high above Lake Michigan. Courtesy of Brian Walters

BAY HARBOR, Mich. - There are golf courses that, no matter the weather, no matter your mood, you look forward to playing. Bay Harbor Golf Club in Michigan's Boyne Resorts is one of those courses.

It's been billed as the "Pebble Beach of the Midwest," but the comparison really isn't necessary. Because this 27-hole resort course, which ranks among the top golf courses in the country, is more than just a few holes perched above Lake Michigan. Bay Harbor has three distinct nines that all feature fun, well designed golf holes.

The stage set here for golf is truly spectacular - whether it's the Irish-like coastal setting of Bay Harbor's Links Nine, the innovative routing of The Quarry course or natural feel of The Preserve Nine. It's easy to see that over the last decade, Bay Harbor has only gotten better as it matured.

It's not as if Boyne Resorts didn't have some pretty good golf courses before Bay Harbor came along in 1998. After all, besides Bay Harbor, Boyne has seven other courses and two additional resorts in the Wolverine State.

In fact, Boyne USA Eastern Operations President Stephen Kircher already knew he had his architect when the company decided to build along the bluffs of Little Traverse Bay.

Boyne was already working with Arthur Hills on a new course at Boyne Highlands Resort at the time, and, along with Steve Forrest and Associates, Hills had already completed numerous courses in Michigan.

In fact, the Arthur Hills Michigan Golf Trail has a dozen courses, and his company has some two-dozen in the state, so the Midwestern-born architect was a natural selection for the job.

But in Michigan - and the Midwest for that matter - it's tough to beat Bay Harbor, both in terms of design and natural topography. And it really does start with The Links Nine.

Lake Michigan at Bay Harbor: Not quite the Pacific, but not bad

By the time you hit your approach shot on the first hole, a dogleg right par 4, you've got a pretty good idea of what's in store over the next few hours.

To the left is Lake Michigan, which on a sunny day can appear to be a deep blue ocean; in front of you is a well-protected green, several stories above the water. And off the fairways, which comes more into play on the difficult 420-yard par-4 second hole, is high fescue much like that on the Irish courses Bay Harbor imitates.

There are lots of terrific holes on The Links Nine, but the signature hole has to be the seventh - a reachable par 5 that narrows off the tee the longer you hit it.

At 490 yards, this uphill hole often plays into the wind, with the "ocean" on the right and fescue on the left. Both the tee shot and approach are somewhat blind if you attempt to reach it in two, a gamble worth taking if you're feeling lucky.

The Quarry doesn't take a back seat at Bay Harbor

While The Links Nine is what you're likely to see in Bay Harbor's brochures, The Quarry Nine might be just as worth playing.

It was on the 15th hole (Links usually plays as the back nine in an 18-hole configuration) where Phil Mickelson, in a Shell Wonderful World of Golf match against Tom Lehman, pulled off a shot even remarkable by Lefty's standards.

The par-4 hole, which is just 312 yards, is drivable, but the green is pretty much an island, with wetlands surrounding it on two sides and rock behind it. Mickelson drove his ball left and long of the green, then played a flop shot out of the rocks, which he nearly holed for eagle.

The Quarry has other interesting holes, as well. The 14th is 478 yards, and unless you drive it well over 300 yards, laying up on this par 4 is probably the best strategy, considering it's all carry on the second shot over water to a shallow, firm green.

The par-4 16th features an intimidating tee shot where the carry over wetlands looks farther than it actually is. And the 17th, which plays back into the lake (and you thought you were done with the lake) is one of the most picturesque par 3s in the Midwest.

For an extra fee, you can also play The Preserve, which probably sees more member play than resort traffic.

While The Preserve doesn't get the publicity of the other two nines, it's certainly up to the standards of the rest of the course. You get more hardwood trees on this nine, and like the 17th on The Quarry, the final hole on The Preserve also opens up to the Lake Michigan shoreline.

What's not to like about Bay Harbor Golf Club? Yes, the green fees can run close to $200 during peak season, but it's well worth it to play at least once. Pretty much every feature and every hole are instantly memorable.

The service at Bay Harbor is also first-class, from the elegantly comfortable clubhouse and grill to the starters and practice facilities. Lessons are available from the knowledgeable, professional staff.

Another nice feature, especially since there are a few blind shots and forced carries, is the ProLink Satellite Yardage System on the carts. This handy gadget provides a graphic of each hole, plus yardage to the pin.

Stay and play at Bay Harbor

Boyne has a number of resorts that offer golf packages, but if playing Bay Harbor is your primary goal, you might want to consider the Inn at Bay Harbor - A Renaissance Golf Resort.

Located on the lakeshore of Little Traverse Bay, this Victorian-style luxury resort is the ultimate summer getaway. It offers spacious suites, fine and casual dining, spa facilities, and cabana loungers that are perfect for watching coastal Lake Michigan sunsets.

Can golf carts be driven on the fairways at Bay Harbor?

Yes, I actually have some photos from my latest round there a few years ago where our cart is off the path at various points. 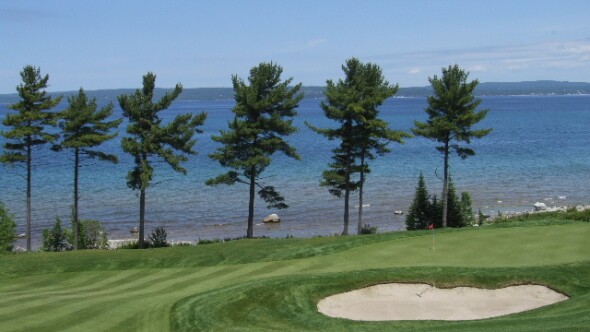 Galleries
12 Images
Photo gallery: The best of Northern Michigan golf
Northern Michigan's golf courses are rated as high nationally as any other destination from Myrtle Beach to Phoenix/Scottsdale. Resorts such as Treetops in Gaylord, Garland Resort, Grand Traverse, Boyne Highlands and the Inn at Bay Harbor are among it's most reputable.

Kira K. Dixon
Lifestyle Correspondent
Now Reading
Bay Harbor Golf Club is still king in Northern Michigan
New Cookie Policy
WE AND OUR PARTNERS USE COOKIES ON THIS SITE TO IMPROVE OUR SERVICE, PERFORM ANALYTICS, PERSONALIZE ADVERTISING, MEASURE ADVERTISING PERFORMANCE, AND REMEMBER WEBSITE PREFERENCES. BY USING THE SITE, YOU CONSENT TO THESE COOKIES. FOR MORE INFORMATION ON COOKIES INCLUDING HOW TO MANAGE YOUR CONSENT VISIT OUR COOKIE POLICY.
CONTINUE
Search Near Me