From Utah to Iraq, exciting original designs by architecture's biggest names are set to debut.

Quality over quantity: that's been the theme in golf course development of late.

The 1980s, 1990s and early 2000s were a time of unprecedented growth in the number of golf courses in the United States and beyond. Real estate developments, "signature" architects and general economic growth stoked the surge. It came to a screeching halt in 2008, but between the overall post-Great-Recession recovery and, more recently, the golf boom facilitated by the COVID-19 pandemic, new golf courses are once again being built at a steady, though modest clip.

It's unlikely we will ever return to the go-go pre-Recession times, but that's not a bad thing. Raw new course numbers may be lower for the forseeable future, but the average quality of those efforts has never been higher. Witness the exciting projects in development by the likes of Gil Hanse, Tom Doak and Bill Coore & Ben Crenshaw, plus up-and-comers like Tad King and Rob Collins. And tenured names like Fazio and Nicklaus are still at it in a big way.

Homer, Neb.
Architects: Tad King, Rob Collins
With the smash success of Sweetens Cove Golf Club in rural southern Tennessee, this dynamic design/build duo made a name for themselves in the space of just nine holes. In 2021, their "back nine," Inness, opened in upstate New York, giving their fans another tantalizing bit of golf to salivate over. This year, though, they will finally show the golf world what they can do in the space of 18 holes draped across 500 acres of heaving hills.

Few golf courses have been as heavily hyped pre-opening as Landmand, with its daring design being compared to the likes of Sand Hills, the Nebraska course now regarded as the greatest built since World War II. Landmand will be public, and when it opens sometime in mid-'22, expect the takes to fly furiously. I cannot wait to see it.

Thermal, Calif.
Architect: Gil Hanse
Gil Hanse may be the busiest big-name architect on the planet, with a slew of renovation and restoration projects on his and his Cavemen band of golf course builders' plates, in addition to new-build projects like this one, which has been linked to music super-producer Irving Azoff. The club, said to be capping its membership under 100, will be sculpted out of a pancake-flat site south of the Palm Springs area.

Columbus, Texas
Architect: Chet Williams
So far, this 2,000-acre community that markets itself particularly to sporting types has been more about hunting and fishing than golf, though its 9-hole par-3 course is charming. But golf's recent surge in popularity prompted owner Billy Brown to reconsider. Chet Williams, who designed the original short course, is now laying out a core 18-holer that will measure 7,400-plus yards in the heart of the community. It is expected to open this fall. 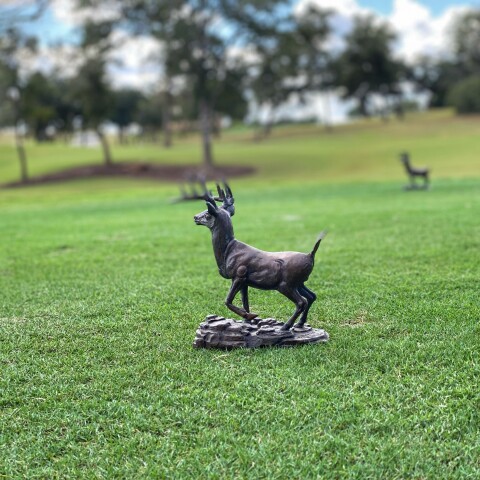 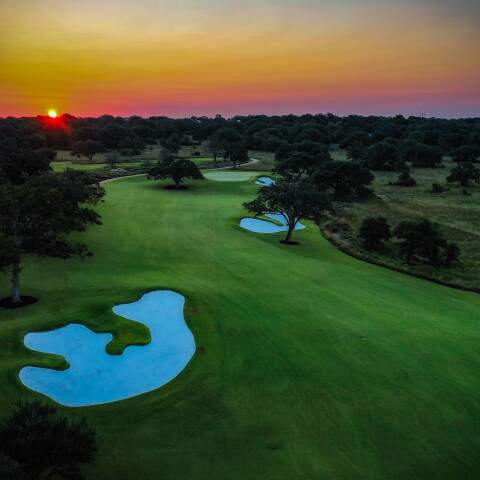 Palm Beach Gardens, Fla.
Architect: Nicklaus Design
This new Nicklaus creation will sit at the heart of a mixed-use mega-development called Avenir just west of PGA National. A distinctly modernist approach to the surrounding community extends not only to the building designs, but also the developer's intentions to outfit all 218 homes around the course with Tesla solar roof panels and electric car chargers. The course is expected to open in late 2022.

Hobe Sound, Fla.
Architects: Bill Coore, Ben Crenshaw
After a somewhat quiet start to the decade, Bill and Ben will see several projects to which they are attached open in 2023 and, potentially, 2022. At the quiet, exclusive McArthur, the pair are building a course that figures to be a rustic compliment to the club's existing Tom Fazio/Nick Price design.

Ivins, Utah
Architects: Tom Weiskopf, Phil Smith
Tom Weiskopf's design career has been somewhat overshadowed by that of contemporary players Nicklaus and Palmer, but among knowledgeable and well-traveled golfers, his courses rank among the most enjoyable and playable, often laid out amongst arresting natural scenery. With the help of Arizona-based architect Phil Smith, he seems to have followed that playbook again, as "PLAYABILITY" is front-and-center on the website for the golf course at this new, modernist resort on the outskirts of Zion National Park. The course gets its name from the lava fields through which it is routed.

Windsor, Colo.
Architects: Fred Funk, Harrison Minchew
Based on what golfers know about Fred Funk, it seems unusual that the fairway-finding 2005 Players champion's first golf course design would measure more than 8,000 yards from the tips, albeit at suburban Denver altitude. But that is the case at this new resort and community, where Funk has teamed up with former Arnold Palmer associate Harrison Minchew to lay out the longest course in the Centennial State. Still, both men insist that once the course opens in July, golfers will find it plenty playable.

St. Johns, Fla.
Architect: Bobby Weed
It appeared on last year's version of this list, but this Bobby Weed design near Jacksonville took its time and is ready for a February '22 opening.

New golf courses to debut in 2022 outside the United States

Mangawhai, New Zealand
Architects: Bill Coore, Ben Crenshaw
American businessman Ric Kayne's Tara Iti brought renewed acclaim to coastal New Zealand when it opened in 2015. That first course, by Tom Doak, is very private, but the next phase of the club's development will comprise two publicly accessible layouts just down the beach. The first of them, the Coore & Crenshaw-designed South Course at Te Arai Links, is set to open in October.

Comporta, Portugal
Architect: David McLay Kidd
Portugal is not on most Americans' radars as a golf destination, but its warm and sunny southern Algarve region is home to dozens of pleasant resort courses beloved by Brits and Europeans, especially in the winter. This David McLay Kidd course, which has been in the works for a decade, is closer to the capital city of Lisbon, which has its own alluring existing courses in the form of Oitavos Dunes and West Cliffs, west and north of the city, respectively. Comporta is an hour south, and is part of a long-term development project that includes a luxury hotel. Could this catapult Portugal onto the world stage as a viable hub for American golfers?

Atlixco, Puebla, Mexico
Architect: Jim Engh
No need to fire up your Duolingo or Babbel app - "cola de lagarto" translates to "tail of the lizard." Located about three hours southeast of Mexico City, this new course sits in the shadow of the 17,000-foot Popocatepetl - "El Popo" - volcano, of Under the Volcano novel and film fame. It is expected to open this spring. The associated community strives for connection to the natural surroundings, with understated modernist architecture defining the yet-to-be-built homes and public buildings.

Erbil, Iraq
Architect: Cynthia Dye McGarey
Even though there are more than 38,000 golf courses around the world, there are dozens of countries untouched by the game. When its first nine holes open in 2022, Iraq will come off the board, as Cynthia Dye McGarey (daughter of Roy Dye and niece of Pete and Alice) has laid out a course in the country's Kurdistan region.

Short but significant new golf experiences to open in 2022

Houston, Texas
Architect: Mike Smelek
Smelek worked for more than 30 years for Robert von Hagge, and is putting the finishing touches on this short layout overlooking Buffalo Bayou in the city's historic Fifth Ward neighborhood. The golf facility, which opens this summer, will also include a restaurant and driving range and is part of a larger community development initiative that includes shopping and residential components on a 150-acre property that has been closed off to the public for 75 years.

The Flamingo at Shadow Mountain

Palm Desert, Calif.
Architect: Jay Blasi
Putting courses with adventurous contours are fun for golfers of all ages and skill levels. And Jay Blasi knows a thing or two about adventurous contours, having worked on Chambers Bay for Robert Trent Jones II. Here, Blasi has fashioned a one-acre green for all comers, as part of the midcentury-modern revitalization of Shadow Mountain by octogenarian owner Lindy Biggi.

Cedar Hills, Utah
Architect: John Fought
Fought is the 1977 U.S. Amateur champion, which might make golfers think he designs courses primarily for strong players. But few architects have a better sense of balanced challenge, which means his design of a new six-hole short layout at this muni between Provo and Salt Lake City should be fun for all.

Brainerd, Minn.
Architect: Scott Hoffmann
What do you do when you've finished using up a large gravel pit? Turn it into a golf course, of course. That's what's been happening in northern Minnesota, where architect Scott Hoffmann has advised on the conversion of a wild industrial site into a 13-hole par-3 course. It opens in April.

Palm Beach Gardens, Fla.
Architect: Nicklaus Design
Not far from the aforementioned Panther National project, the Golden Bear's team are also adding an 18-hole (plus an island-green 19th "shoot-out" hole) short course to Palm Beach Gardens' existing municipal course. Holes will range from 69 to 253 yards, and several template greens in the style of C.B. Macdonald and Seth Raynor are expected to feature when the layout opens in November.

2023 likely to be a big year in new course openings

Not to look too far ahead, but next year might prove to be the best this century for standout new courses. Tom Doak's restoration of The Lido course near Sand Valley Golf Resort in Wisconsin will be fully online, as will Coore & Crenshaw's spellbinding Cabot Saint Lucia property in the Caribbean. Brambles, a C&C project in northern California that has come along slowly, should also open, as might Wicker Point, a new C&C design on impressive lake frontage in Alabama. And 2023 will also (finally) bring the much-anticipated opening of PGA Frisco's two courses: one by Gil Hanse and the other by Beau Welling.

Another PGA of America project, the Hanse-designed West Palm Golf Park, is currently slated for an early-'23 opening, too. And on the other side of the world, Tasmania's Seven Mile Beach project should debut, the brainchild of former PGA Tour player Mat Goggin and designed by the firm of Clayton DeVries Pont. Just as the 1920s have come to be seen as a golden decade in classic golf course architecture, the 2020s are shaping up similarly. If you like golf courses, watch this space for more news on exciting developments in the near future. 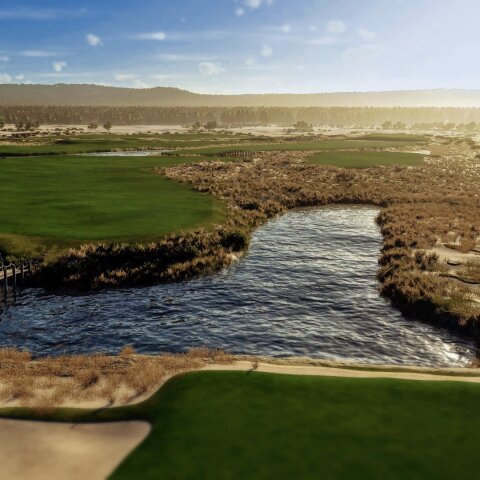 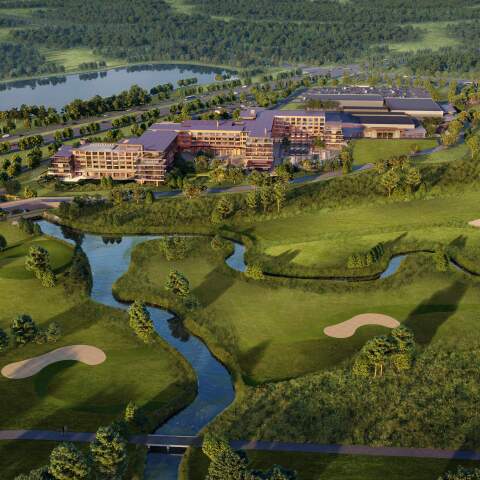