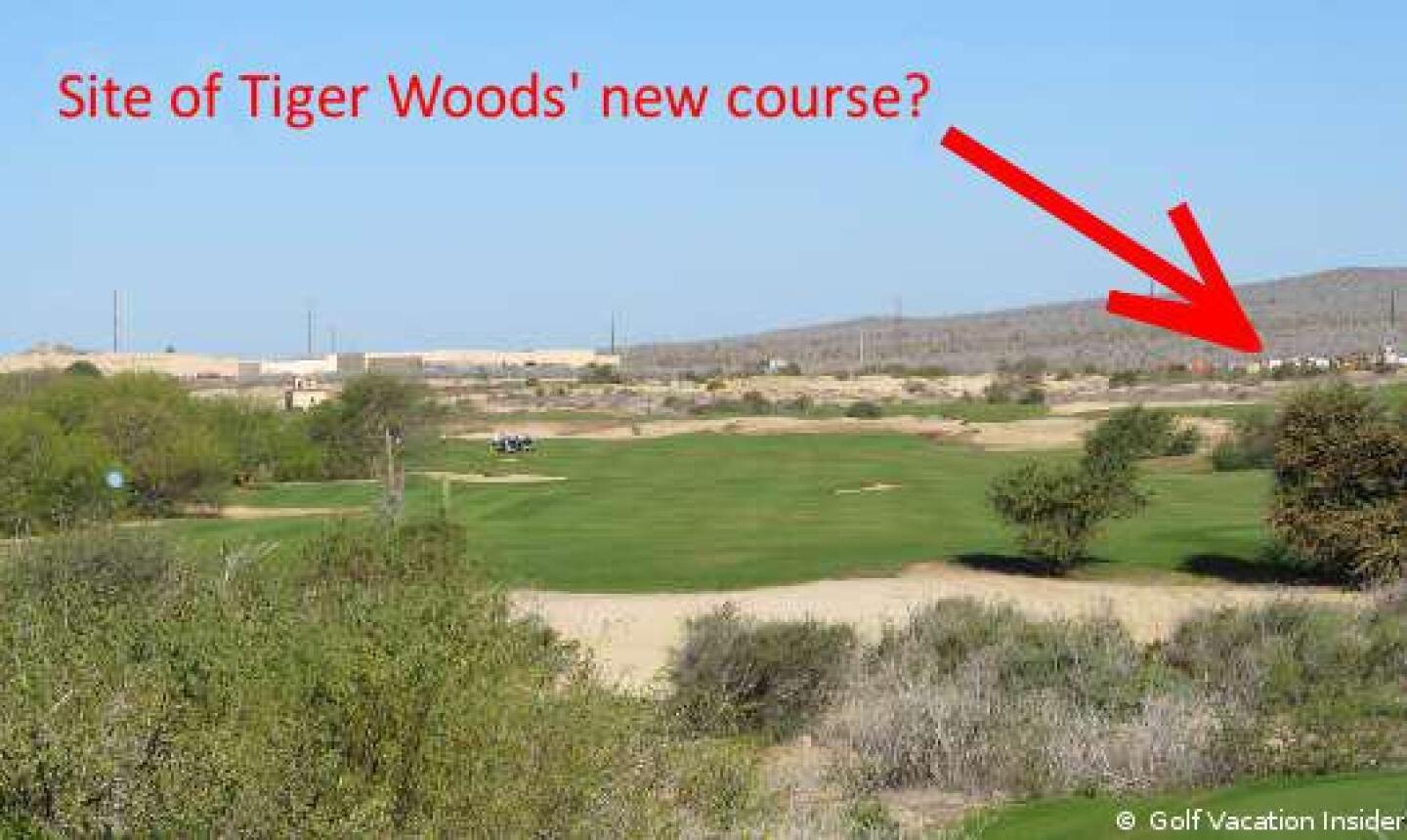 We were told that the highlighted area above will be part of Tiger Woods new golf course design in Cabo San Lucas, Mexico.

Despite Tiger Woods pulling out of last week's event with a sore Achilles tendon, his game -- and his golf course design business -- appear to be picking up.

Regarding the latter, word is that Tiger has agreed to design the next golf course at Diamante in Cabo San Lucas, Mexico.

While on site, a member of our editorial team was told by a Diamante representative that the residential/resort community had just days ago signed a contract with Tiger Woods to design the next course there. Construction is said to begin shortly.

The site itself (including construction equipment) can be seen on the far right-hand side of the above photo (if the giant red arrow didn't give it away).

I attempted to corroborate the news by calling Tiger Woods Design, but I got a weird message saying the voicemail couldn't accept more messages. Shot an email to company president Bryon Bell, too. (I'll update this post if he gets back to me.)

If the job has, in fact, gone to Tiger, he'll have his work cut out for him.

Diamante is the most exciting thing to happen to Cabo San Lucas golf since Jack Nicklaus designed the Ocean Course at Cabo Del Sol in 1994.

In addition to racking up many other accolades, Diamante's original, Davis Love III-designed Dunes course debuted at #58 on Golf Magazine's list of Top-100 courses to play in the world.

These photos help explain why:

The second course at Diamante is being called "Lagoon." (A third course is also part of the development plan).

Again, if this truly is Tiger's next golf course design project, I sincerely hope it goes better than his previous ones.

As we reported in 2010 (and the New York Times confirmed in an April 2011 article) Tiger's other project on Mexico's Baja Peninsula (Punta Brava), as well as those in Dubai and North Carolina, have either been abandoned or, at best, delayed to the point of undetermined completion dates.

To date, the only "course" completed by Tiger's design firm is the one that sits behind his Jupiter Island, Fla., house: a 3.5-acre short- and mid-range practice utopia.

What do you think? Is this Tiger Woods' next golf course design project? Please share your comments below.

Craig Better
Craig Better is one of the founding editors of Golf Vacation Insider. In addition to traveling to 15 foreign countries, he has twice traveled across America to play golf courses in all 50 United States. Prior to joining Golf Vacation Insider, Craig was a freelance writer who contributed to GOLF Magazine, Travel + Leisure Golf, Maxim Magazine, USAToday.com, and co-authored Zagat Survey’s book, America’s Top Golf Courses.
14 Comments

you people have no idea what youre talking about, i live in colorado have a house in cabo and its safer in cabo than denver... 6000 people killed in 10 years in chicago...yeah thats where i want to live..

I guess people have a hard time dealing with a golf icon like Tiger. He is what he is but he is still the best golfer in the world. Better than the flash in the pan Europeans who rise to #1 and then fall apart. I think McDowell said it all when he said he had a front row seat at Bayhill watching Tiger do what he does best. Win! Luke Donald is another great golfer takes his golf serious and is not about numbers. Get real people he is a great golfer..

We go to Cabo every year in January and love it. Safe, perfect weather, friendly people, and the best seafood anywhere. Not inexpensive. We usually play the Cabo del Sol and Palmilla courses, all of which are excellent, with the exception of the very weird oceanfront stretch on the front 9 of the Cabo del Sol Ocean Course, which has two par 3 holes back to back with long walks from the cart path; they have been redone in the last couple of years and feel completely phony. The rest of the holes are very good and the finishing stretch on that course is wonderful.

What happened to Phil Mickelson? His name was all over Cabo and I even read it in I think Golf Magazine and maybe Alaska Airlines magazine and was likewise tossed around by Diamante sales reps. I live in Cabo and hear all the rumors early as I am a real estate broker here.
The Diamante Davis Love III course is a classic links course. Expensive, but thrilling when the wind howls in off the Pacific. When you consider that Cabo also has 4 Nicklaus courses (one with a Greg Norman 9), a Pete and Roy Dye, a Robert Trent Jones Jr. redesign of a Joe Finger, a Tom Fazio, a Tom Weiskopf, and a Mario Schjetnan design built by the Mexican Government (FONATUR), you might understand that we are under-impressed by name dropping.
We are extremely impressed by finished product. Now if only we could afford to play.

What do you suppose all that oceanfront land that The Ocean Course at Cabo del Sol occupies is worth? Perhaps that is at least part of the reason for the fees, not too mention it is a pretty darn good golf course regardless of location.
And by the way, I did some research... on the DAY you played their other course a couple years ago there were 25 times the number of players you threw out as the WEEK'S total playing on The Ocean Course. You can't just throw out crazy statements and expect people to accept them as fact.

I stayed at the hotel adjacent to the Jack Nicklaus Cabo del Sol course two years ago and i saw about 4 people play in a week because of the ridiculous high green fees with no internet specials.I played at the Tom Weiskopf designed desert course just above and the best i could find is $90 at twilight.Those courses are beautiful but what 's the deal if nobody can afford to play!!!

R Scott- have you actually been to Cabo and have you played Diamante? I suspect not. Diamante is first class in every respect- service, food, golf, and management. Cabo is a wonderful place and safer than most cities in U S.
While everyone has varying opinions on Mr. Woods, time will tell if he produces as advertised. Until facts surface to the contrary, probably best you just STFU!

R. Scott - Typical American garbage. Cabo is as safe as anywhere you care to throw out in the lower 48. Stop believing the garbage you see on CNN and Fox who love to paint an entire country with a broad brush. If all you read about was Compton &amp; Watts in LA and LIberty City in Miami or the Ninth Ward in New Orleans one might believe the entire US was a gang infested, wild west free for all.

If Tiger gets some fool to pay him to design a course--more power to him.What does he know about Earth and Movement of soil etc? What did he study in College--which he never finished.

Better he should be on an advisory council..than being totally responsible.