Has golf fandom lost its moral high ground for good?

Fan treatment of Bryson DeChambeau runs directly against the game's tradition of civility.

It's not easy being Bryson DeChambeau, though no one would argue that a measure of that difficulty has come from some of the 27-year-old major champion's own decisions and public pronouncements.

Citing a potential shortage as an excuse for declining the COVID-19 vaccine? Strange move.

Continuing to neglect to yell "Fore!" on his errant drives, even after being called out by fellow pros? Rough look.

Publicly complaining about the performance characteristics of the driver that his sponsor has spent countless hours fine-tuning? Tough scene.

And that's all in the last month.

The platform on which all of these recent episodes rest, though, is DeChambeau's ongoing tiff with Brooks Koepka. Who started it, said what or did what is a useless question at this point. What matters is that the beef has transcended its home environment of social media and begun to have real-world consequences. And that is unacceptable.

Or, at least, it has been deemed unacceptable for golf's centuries-long history up to this point.

In the aftermath of Sunday's disastrous WGC-FedEx Championship finish for both DeChambeau and 54-hole leader Harris English, Golf Digest's Shane Ryan, who walked with the ill-fated final group, called the experience "one of the ugliest nine holes you can witness on the PGA Tour," observing that in addition to the discomfort of being put on the clock for slow play (another source of criticism against DeChambeau), the pair had to deal with constant chants of "Brooksy," a reference to the aforementioned outside-the-ropes hijinks.

"On the surface, this may sound ridiculous, minor, and even funny," Ryan wrote. "In reality, when you follow DeChambeau for even half a round, and you see the faces of the people taunting him for a mean little thrill, it looks crueler and more intense than would come across on TV or in written reports."

Hecklers pop up in all sports - including golf - but they tend to be sideshows or isolated incidents. The overwhelming majority of golf tournament spectators have known almost instinctively to be respectful and quiet, except when acknowledging an excellent shot they have just seen. In essence, golf's proud history of self-policing standards of conduct among its players extends to fans as well.

The picture Ryan paints - nasty sideline goons intentionally trying to spoil the performance of one specific player - is something new and disturbingly ugly.

Because of his own slow approach to free-throw shooting, Milwaukee Bucks' star Giannis Antetokounmpo had to deal with opposing teams' fans counting out loud and in unison while he prepared to shoot throughout the 2021 NBA Playoffs. That Antetokounmpo ultimately triumphed, his team winning the championship, may seem like an excuse to argue that DeChambeau should simply learn to deal with his own jeering section. But that argument breaks down both because of golf's individual nature and its long history of gentler fan decorum, the occasional and relatively innocuous shouts of "Mashed potatoes!" and "Baba Booey!" aside.

It is entirely fair to have an opinion about Bryson DeChambeau - everyone does - and to be critical of his antics and statements. But is even the most severe reading of DeChambeau's behavior worth destroying one of the hallmarks of golf fandom?

Do we want to add malicious bullying to the list of things golf tournament spectators can get away with? That's for fans, tournament organizers and the major tours to decide. The moral standing of the game is at stake. 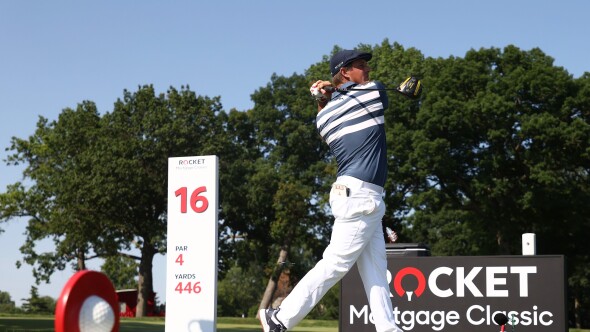 It’s not new. I remember the abuse Colin Montgomerie used to get from some of the US fans; not just ribbing or taunting, but flat-out non-stop foul abuse. Going back further, Nicklaus also got a lot of abuse when he started beating Palmer regularly, but probably not with so much swearing.

Arnold Palmer must be rolling over in his grave. He may have been amused as we all were when this first surfaced, but it is no longer funny. As it has been posted, Bryson brought much of this on himself, but this has gone too far. What needs more mentioning is Koepka's lack of any attempt to quell this behavior -in fact he is encouraging it. He may be a multiple championship winner, but regrettably, Brooksy has shown himself to be quite a bit of a punk, and someone who is so insecure and in need of press attention that he even stoops to this level. Let's not let Koepka off the hook on this either.

Bryson does things differently. So what? Cut him a break. He is good for the game.
As far as heckling at a tournament, it should be totally eliminated. This is supposed to be a gentleman’s game.

The TPC course in Arizona has encouraged rowdiness. The idiots that have to yell, "In the hole" or scream something after a shot need to be removed from the course. The PGA Tour needs to intervene in the feud between Brook & Bryson & put a stop to it. One way is to suspend both until a resolution is resolved. Stop serving alcohol at tournaments & the drunken rowdiness may be curbed. The PGA needs to update their slow play assessment to only the individual that is causing the slow play not the group (unless DeChambeau & Hoffman are paired together). It wasn't fair to English to be put on the clock when it was Bryson causing the slow play.

Exactly. The TOUR is giving mixed messages by encouraging, on one hand, "the loudest hole in golf," but on the other hand, wringing hands about decorum. The TOUR has reaped what it has sown.

I live in WI an hour away from the Straits. It's the very dead last place I would want to be during the Ryder Cup. All those drunks lining the holes? Nope. It's going to be shameful.

Golf has always been s sport of respect and cheering on the golfers as they play. These fans are equal to the millennials in their harassment and name calling to Bryson. It must be taken into consideration by the PGA to start dismissing these crude and less than respecting fans. Immediate expulsion without question, no arguing, you can’t use your $$$ as a reason to leave them in and with no refund. Let’s keep our game on the top level PGA.

Golf etiquette, professionalism and "moral high ground" no longer exist. This is true of professional tournament play as well as public and club play. It starts with the drama that television insist on. They choose who and what actions to endorse or vilify. They celebrate the drunken fans at TPS Scottsdale. They think that Mr. Koepka's antics are refreshing. Something that is different or not part of their view is somehow not acceptable. They make drama out of the term "Fore" for Bryson, even though it apparently is a non-issue for others.Really? How loud would Bryson have to be for a spectator 3-400 yards away to hear him, assuming that they were not heckling him to begin with.People try to emulate the big hitters on tour. I have seen many instances where people play the wrong tees and hit big shots and they have no idea where the ball goes and even into other players. Fixing a ball mark or repairing a divot? That's somebody else's job.
Golf is no longer a game of courtesy and comradely. You simply need to watch TV to understand how the game has eroded. I'm just glad that Arnold isn't here to see this/

I agree with much of what has already been posted. Growing the game certainly comes with the consequences we've all witnessed, but the lack of enforcement at so many public courses these days has to be the most alarming issue. I want to scream out loud every time i hear someone say "I paid my money, you can't tell me what to do." The new breed of golfer doesn't understand the history of the game, and probably wouldn't care even if they did. They see BD analyzing and over-analyzing every shot, causing a snails pace of play, but they also see him winning so this behavior becomes okay in their minds. I don't think he realizes the impact his behavior has on new fans of the game, but many of his fellow pros do, which I believe is why he is getting called out for it more and more. It should not have morphed into the heckling as it has, but that's what sports fans in America do, and no longer are there just golf fans watching these days. You reap what you sow definitely still applies.

Should be a zero policy on taunting. If caught you get the boot.