This decades-long weekly money game is a Cool Golf Thing

It's good to sweeten the pot.

There aren't many universal truths in golf, but one I have found is that golf courses where good players tend to hang out are better than ones where they do not. There is something about knowing seriously accomplished golfers - from local amateurs to aspiring and current touring pros - frequent your course that gives it an air of authority.

This past Monday, at Papago Golf Course in Phoenix, Ariz., I got to do just that. I was welcomed by the three mini-tour pros I was paired with for the course's Monday Skins game, which has run nearly every week for more than 30 years, save for a brief lull before the course's most recent round of renovations in the late 2000s. I threw $65 into four games: $35 for skins and $10 each for par-3 scoring, aggregate scoring on the last 5 holes and deuces (make a 2, get paid). I declined to go "all-in," meaning I didn't drop $35 more to take part in the overall gross score game. I knew my limits.

A post shared by The Monday Game at Pap (@mondayskins)

The three mini-tour pros (of 50 total players this week) I was paired with could not have been friendlier. Theirs is a tough road, balancing the dream of future PGA Tour stardom with the real and immediate need to make reliable money (caddying or valeting cars for an area hotel, as is the case with two of them). Monday Skins is a chance to put a little extra cash in the pocket and get valuable competitive reps at relatively low cost. Dropping in for a day to compete alongside much better players than I am was an honor and a privilege, and a valuable reminder that golf is a game: there are winners, losers and thousands of dreamers in between. 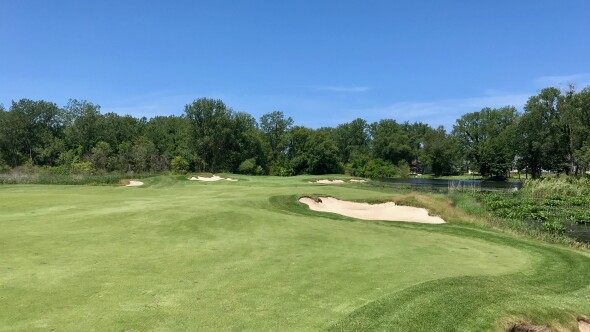 Articles
1 Min Read
This money-saving weekly Michigan skins game is a Cool Golf Thing
You cannot win if you do not play.