Celebrating Father's Day with a rare three-generation round of golf

It took a 13-hour drive from NoCal to Washington state to make it happen.

Father's Day will be different for everyone this year, especially for golfers.

There will be no U.S. Open to watch. Many sons won't be able to see their dads due to social distancing and travel restrictions related to the pandemic. Getting a tee time will likely be harder than ever, since golf participation is booming at the moment.

Thank goodness, I already celebrated last week. I played nine holes with my father and son in Washington state, a very rare three-generation round of golf. Neither my dad or son play much. "Ronnie", that's what I call my dad, tees it up a couple times a year. My son, Carter, probably hasn't played since the last time the three of us got together for golf at least five years ago.

Golf is slowly becoming a tradition when I visit dad in Mount Vernon, Washington, except that I fear it won't last. At 75, his knees are cratering, and my 18-year-old son's ready to embark on his life journey at an out-of-state college in the fall. Living a 13-hour drive apart - me in San Jose; my dad north of Seattle - it's not easy to connect.

Knowing all this, it's why I treasured this round so dearly. I took more pictures and videos than normal. My dad's father passed away when he was very young, so I know he never got to experience moments like these. Take it from me: now's the time to appreciate DAD more than ever, my dad, your dad, every dad out there.

Our bond in golf

While most sons learn the game from their dads, it was the opposite in my house. I rarely touched a club until I went to college and began working at a golf course. I taught myself to play and brought the game home to my dad. He started playing as a way to connect with me and my golf writing career.

Every tee time brought a new, zany adventure for two amateurs in every sense of the word. I specifically remember one round where my dad spent more time in the woods looking for balls than he did sizing up shots. He didn't actually hit his ball in there. He just went looking for some. Later, as I was raking a bunker, I didn't realize he had finished the hole and taken the flag stick out. I putted toward him, thinking he was tending the pin at a hole location I couldn't see. Boy was I mad when I realized I had putted well away from the actual cup.

Another time, we watched his errant tee shot bounce off a roof of a house onto another roof and hit a third before the ball ended up back in play. Once, a local course was so muddy I jumped on his back to be carried to safety. He was wearing rubber golf rain boots. (Yes, they're a thing for winter rounds in Washington.)

My dad has also turned his favorite past-time - collecting and picking at garage sales and antique stores - into a hunt for golf treasures that eventually become my Christmas and birthday presents. Although most of what he buys is junk, he's unearthed some cool stuff - a Putter Boy sundial statue from Pinehurst, a Calamity Jane putter, classic golf books, hickory-shafted clubs and a rare four-foot-long Tiger Woods Nike poster from 1998.

Another trinket from my dad's collection ... Anybody know what it's worth? #PutterBoy #pinehurst

A post shared by Jason Scott Deegan (@jasondeegangolfadvisor) on Jan 4, 2016 at 8:44pm PST

We both have tried to pass the game onto my son. Nothing has ever really worked. We first took him to a par-3 course when he was about 5. He's played a few shots on some famous courses over the years (La Costa in SoCal and Old Greenwood in Truckee). However, I think he only tagged along to drive the cart. He's talked about playing golf with his buddies during the pandemic (hasn't happened yet). Eventually, I'm sure he'll find some pleasure in the game.

The Overlook Golf Course "overlooking" Big Lake on the outskirts of town has become our "country club." It's perfect for two beginner hackers and a wannabe playa (me). It's the kind of place where I called to make a tee time and the guy who answered said: "We don't do that here. Just come on out and we'll get you out." 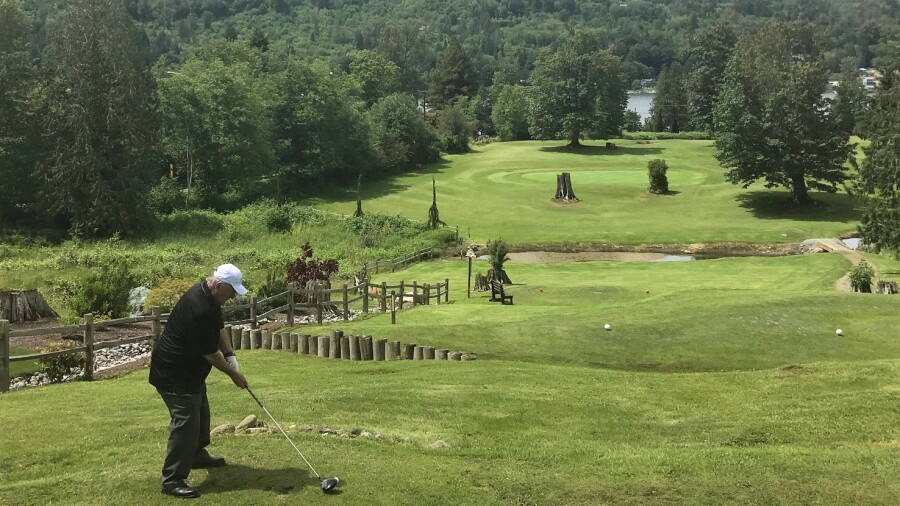 The par-3 third might be the prettiest of 3 par 3s at the Overlook Golf Course. Jason Scott Deegan/Golf Advisor 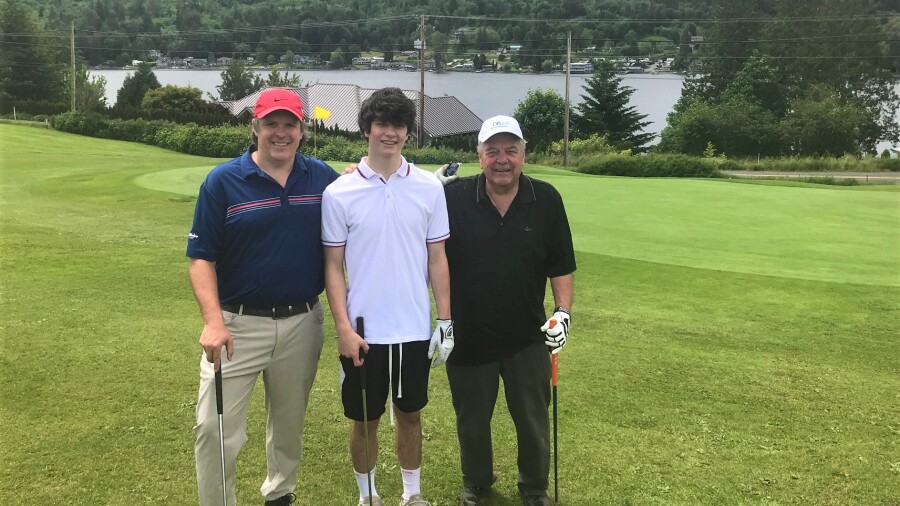 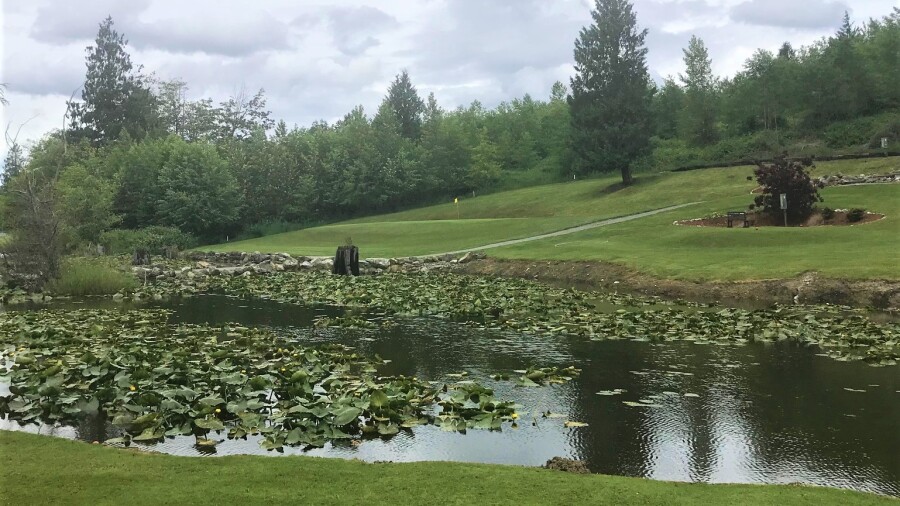 I gave the little nine-holer a cruel and probably unwarranted two-star review from 2013, the early days of Golf Advisor. My tastes and understanding of shorter courses (2,261 yards) have matured since then. It's probably 3.5 stars now. Improvement projects have helped, though, too. The boring, old seventh hole has been transformed into a small practice chipping/pitching area with the replacement hole much more compelling, a 126-yard uphill shot over a pond. This pond/wetland that's in play throughout the round has been cleaned up and is now lily-pad heaven for frogs. There are no bunkers, so it is the primary hazard.

The golf that day wasn't memorable - seven pars among the three of us - except for one swing. While cleaning out a few drawers the night before, I stumbled upon an exploding golf ball, likely bought from a garage sale years ago. I'm not normally a practical joker, but this felt like a sign from the golf gods. On the second tee, as my dad was setting up to hit, I set the trap.

"Dad! What's that animal over there. See it? Is that I beaver?" I exclaimed, feigning excitement.

I walked up to him and pointed to the opposite shoreline. With his eyes diverted, I knelt down and replaced his ball.

"He just went into the water. He's gone," I added with a hint of sadness. While my dad was doing his usual waggle, I was sure he'd notice the difference in balls. Nope ...

Looking back, I almost feel guilty how it all went down. I took advantage of the old man. I told him before the round I would be writing a story about our grandpa-father-son bonding, so he was already nervous. I could tell.

After the round, he joked that he might have PTSD standing over the ball from now on. All I can say is: Thanks dad for being a good sport! How about a public shout-out for being such a terrific dad and grandpa. Will that make it all good?

It took me a while, but I've finally forgiven my dad for not introducing me to golf at a young age. At least we eventually found a way to enjoy the game together. One explosive shot at a time.

Happy Father's Day to all the golfing dads. Share your best golf stories involving dad in the comments below.

Great story! Great points made throughout! My favorite recent memory of golf with my dad was playing Ak-Chin Southern Dunes in AZ with my 72 year old father (Paul). It was just this past January...we were walking, as a twosome, I had his favorite Rolling Stones Pandora channel going on my speaker...weather was perfect. We get to the par three 4th hole and he takes a smooth strike at his Callaway Chrome Soft with his Callaway 9 Iron. His ball goes into the cup for his first hole in one EVER...we got to the cup and he pulled the ball out (tears in his eyes, smile on his face...and we both hugged and took in the moment). It was a magical moment of Father-Son Golf...hug was pre-COVID so may be the last time I have hugged my father since then. We both will cherish the moment and memory forever.