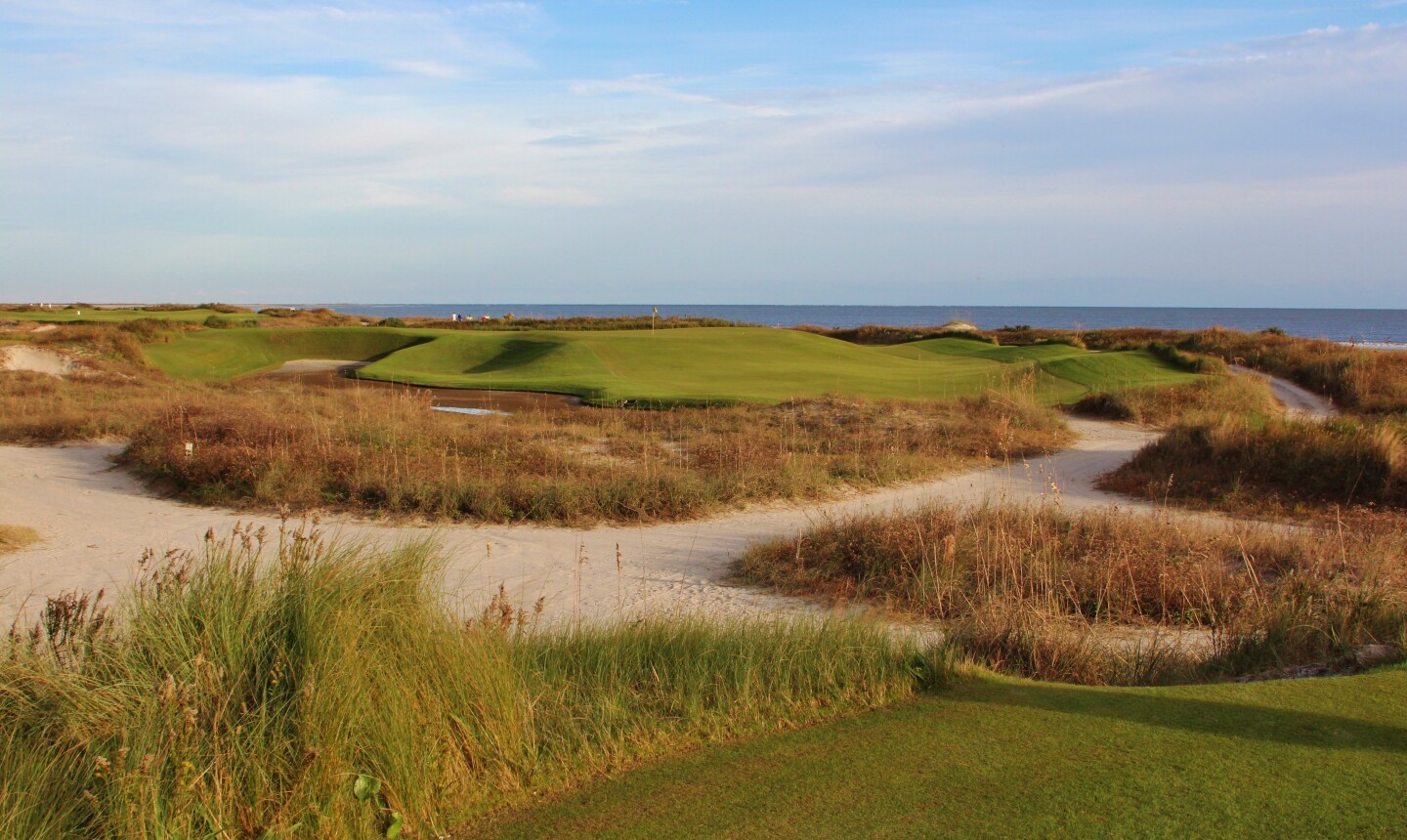 The stretch along the Atlantic starting at the 14th hole is why the Ocean Course at Kiawah is one of America's most expensive rounds. Jason Scott Deegan/Golf Advisor 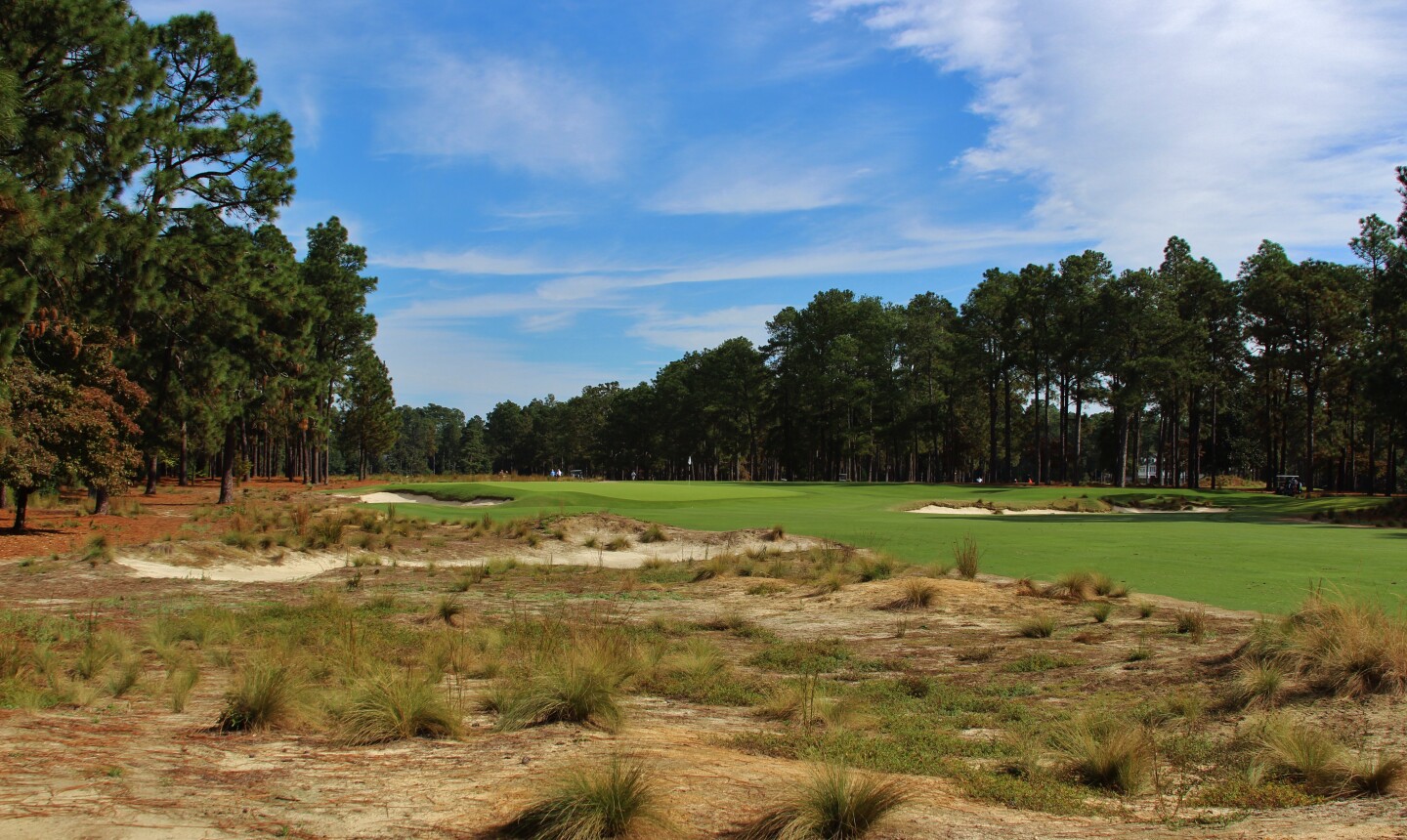 Pinehurst No. 2 is a rare public courses ranked on both the Golf and Golf Digest Top 100 lists. Jason Scott Deegan/GolfPass 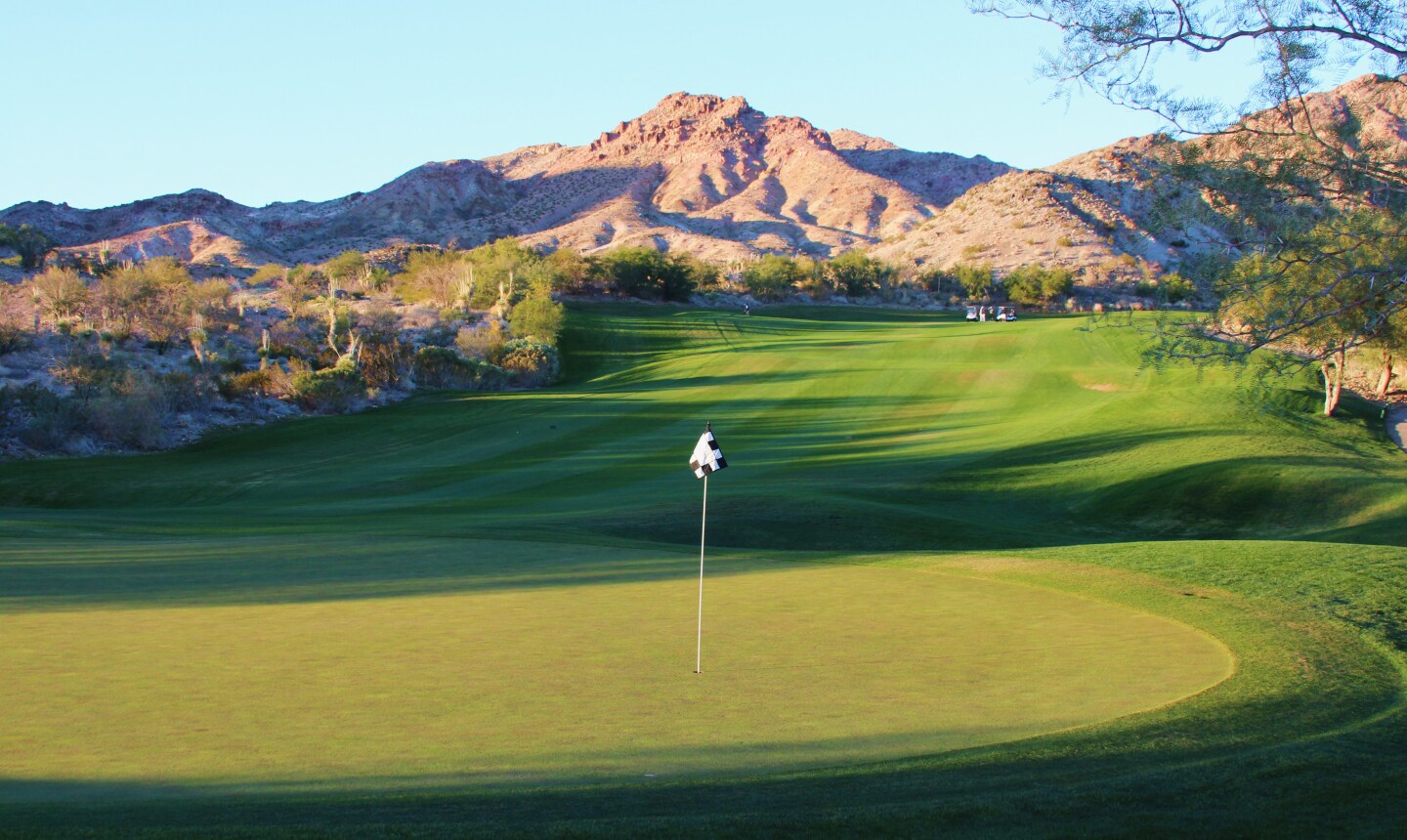 Cascata is one of three high-end, Las Vegas-area courses that charge more than $400 a round. Jason Scott Deegan/Golf Advisor 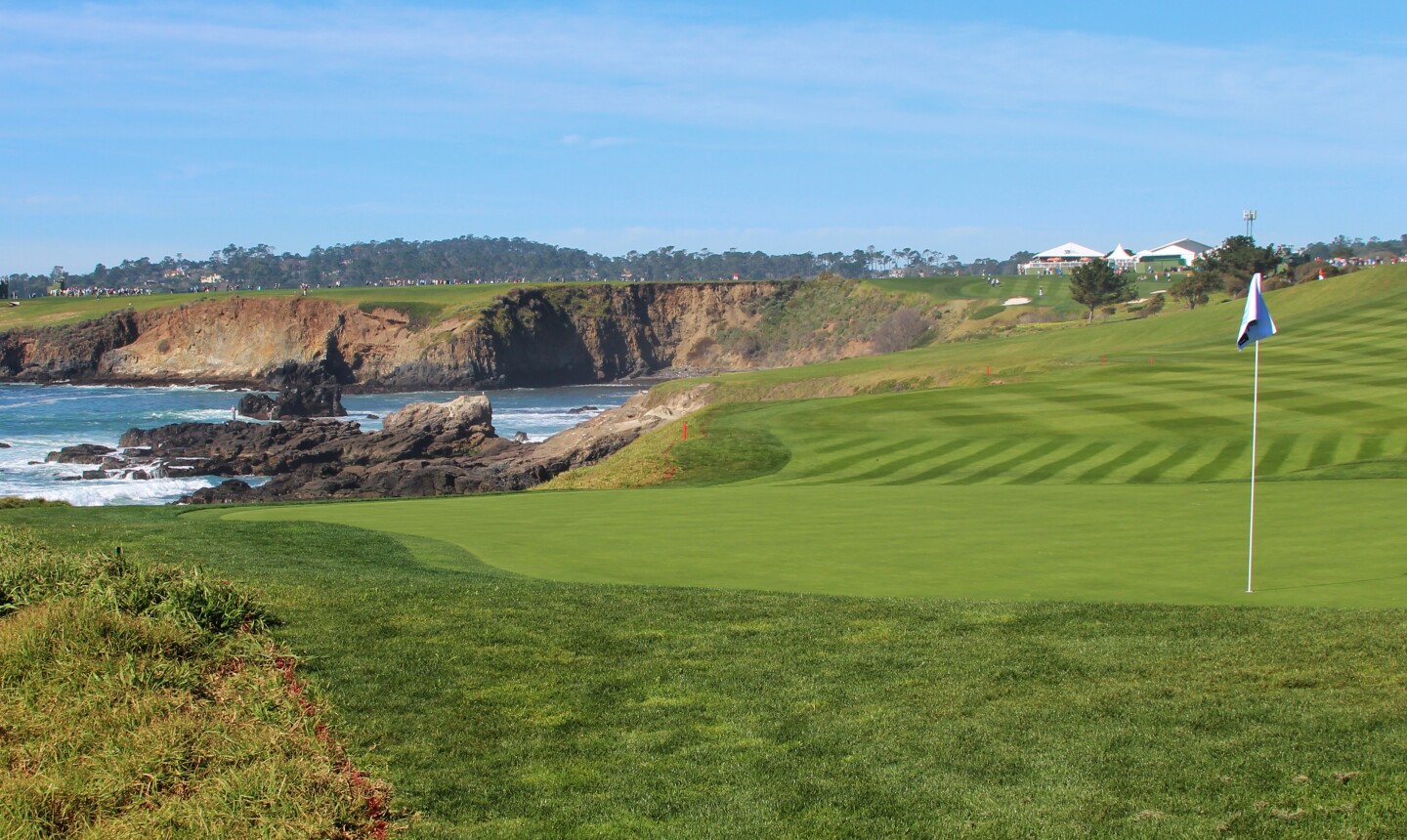 The Youth On Course auction offers incredible items to bid on, including a visit to golf's holy grail - Pebble Beach. Jason Scott Deegan/GolfPass 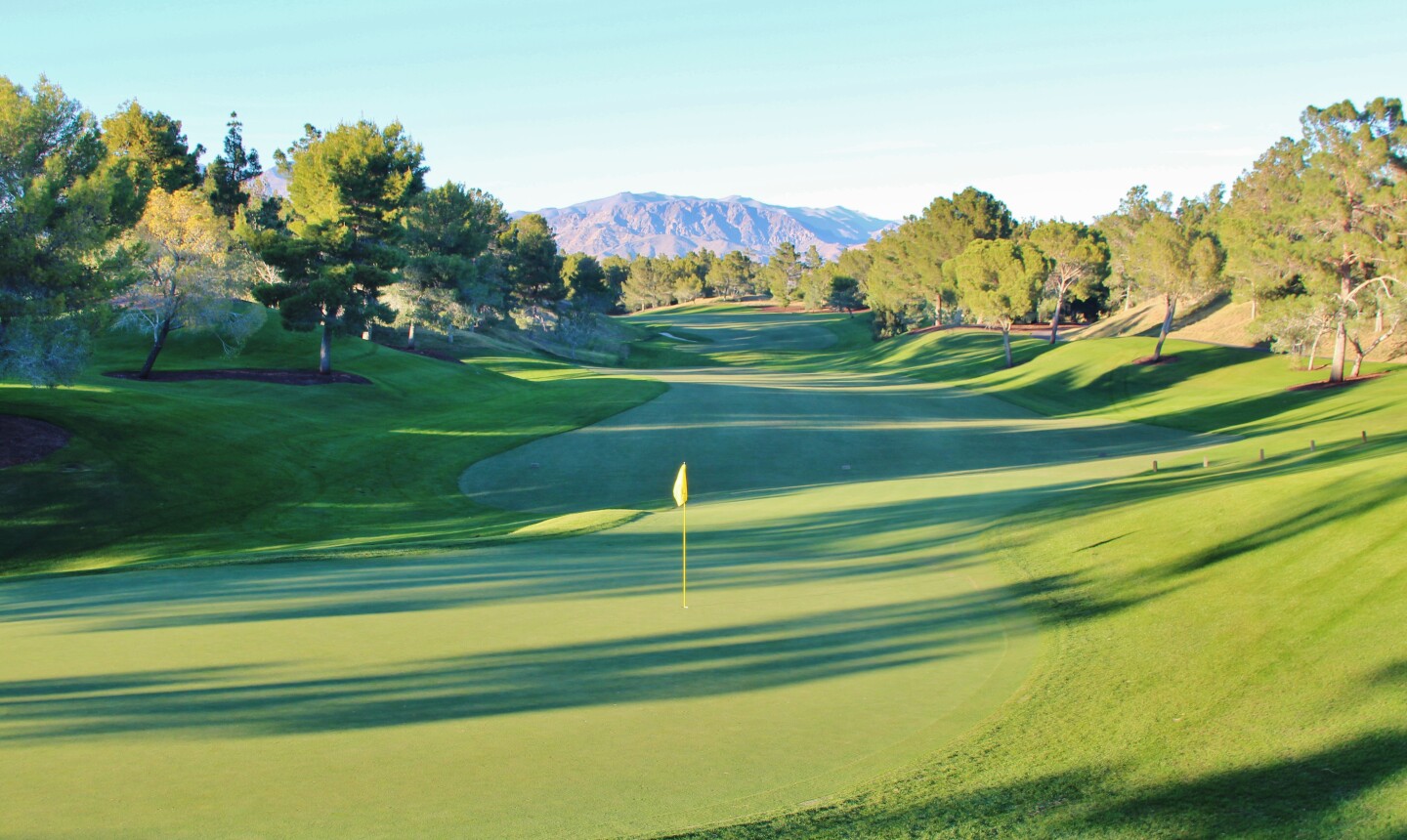 Like everybody else, the southern California resident wants to play the best courses, but he hates paying full freight.

He used all the usual tricks to find discounted green fees -- tee times in shoulder-seasons (bad weather was a constant issue) and at twilight and buying packages to bundle expenses. The truth is, America's most expensive courses just don't offer many breaks. That never deters Laubach, who has plans to play six of the 12 priciest courses in America this year. Every rack rate charges in excess of $350.

"I spend a lot of time doing the logistics of these trips and get frustrated that I can't find better deals," he said. "It's not so much about (saving on) the green fee. It is more about the trip and vacation. Your savings are going to come in the packages or hotels."

So what are the "cheapest" ways to playing America's most expensive courses? There are no magic coupons. If you want to pay less, you risk battling darkness, rough conditions or iffy weather.

Comment: Discounts at Pebble Beach Golf Links? Hardly. The full Pebble Beach experience, if you include cart and forecaddie, can cost more than $600 a round. Laubach recommends booking at the Inn at Spanish Bay instead of the Lodge at Pebble Beach to save. A cheaper, riskier alternative would be to stay somewhere else (I like the Hyatt Regency Monterey Hotel & Spa or the Quail Lodge & Club) and try to book a tee time on Pebble Beach 24 hours in advance. This might guarantee you tee off at an odd time and could split up your foursome, though.

You could also purchase a Duke's Club Membership from the resort for an annual fee of $340. It sometimes offers $395 rates to play Pebble Beach. Twenty percent off at select Pebble Beach restaurants and the membership rates at the resort's other courses ($100 twilight rounds and $210 regular rounds at Spyglass Hill; $75 twilight rounds and $155 regular rounds on the Links at Spanish Bay) could ultimately drag expenses down.

Every once in a while, NCGA members get an e-mail promotion encouraging play at Pebble Beach in the winter. In 2017, the promotion, running from mid-December until Jan. 31, was a good one: Members could tee up Pebble Beach for $395 (35 percent off), Spyglass Hill for $225 (56 percent off) and Spanish Bay for $150 (63 percent off). Every price included a free cart and a $75 gift card to use in the pro shop.

Comment: Rate increases after the 2015 PGA Championship have made the price to play the Straits Course at Whistling Straits essentially on par with Pebble Beach if you include the caddie fee and tip and skimp a little bit at Pebble Beach by carrying your own bag without a cart or a caddie. Laubach still calls Kohler his favorite getaway for the price.

"The vacation we scheduled this summer, if you are going with double occupancy, is about $1,100 per person with rounds at Straits, the River (Course at Blackwolf Run) and one of other courses and free replays. That covers the caddie fee on the Straits and a room at the Inn at Woodlake (for several nights)," he said. "You are going to be under $300 a round. That's how I look at these trips: What is my price per round? It's these packages that you put together to get more bang for the buck."

For the record, the resort quoted that package price about $1,300 per person.

Peak Rate: $1,000 plus a stay at one of 10 MGM Resorts International properties in Las Vegas. Potential Discounts: None.

Comment: There's a reason Shadow Creek remains one of the most exclusive tee times in golf. The most affordable way to play it would be to stay at Circus Circus, generally the least expensive MGM hotel in Vegas. Both times I've played Shadow Creek, I've stayed at the Aria Resort & Casino. I recommend that route first.

Comment: South Florida's seasonal golf climate creates some price flexibility at the Blue Monster at Trump National Doral Miami. Trump sticker shock can be beat with summer twilight tee times. A new Trump Golf app could offer other specials, according to Cari Farinas, the director of marketing communications & public relations at the resort. She said golf packages generally save 20 percent.

The Championship Golf Package including a night's stay, daily breakfast and a $225 surcharge (plus caddie fee/tip) to play the Blue Monster, which adds up to $725 for one player or $580 per person for two players sharing a room until April 31. That surcharge drops to $125 from May 22-Sept. 30. None of these prices include the nightly $20 resort fee or 13 percent state and local taxes.

Peak Rate: $460 (caddie not required). Potential Discounts: Winter $370 walk-on rate or an Evergreen package that runs from November through March ($179 per night plus $150 surcharge to upgrade to No. 2 with accommodations and the breakfast buffet in the Carolina Hotel).

Comment: Locals watch the winter forecast religiously, waiting for nice days from Thanksgiving through early March so they can play Pinehurst No. 2, a Donald Ross gem, at its most affordable. Couples who buy the Evergreen package can swap out golf for spa, so that's a popular way to keep his and hers happy.

A March Escape package shows how quickly prices jump heading into high season. It ranges from $399-$604, depending on where you stay and single or double occupancy, and includes breakfast and dinner each day. The $195 premium to play No. 2 isn't included.

Comment: Laubach said Cascata and Spyglass Hill (with its twilight rates) are the two courses in this story where real discounts can be had. Cascata is the most creative with its rates, probably due to its isolated location a half-hour's drive from the Strip.

That weekday summer time deal is a steal for such a grand golf experience. Early morning rates can also be more affordable depending upon the season. Another tip: Holidays such as Mother's Day weekend and Easter Sunday deliver built-in discounts. Mom can wait, right?

Old White TPC at The Greenbrier

Comment: Spring and fall weather in the Allegheny mountains of West Virginia can be dicey, but the savings at Old White TPC at The Greenbrier are significant, nearly 40 percent. The prices of packages featuring unlimited golf are dependent upon the room rate.

For example, a search for the month of April at the resort website revealed the cheapest room for $208 per night for a single person, plus $125 to play any course and another $100 surcharge to play the Old White TPC, for a total of $433 per night. A Saturday night in May jumps to $358 a night, plus the $330 in surcharges/caddie fees to play the course. Laubach has a soft spot for the classic charms of the Greenbrier. "It is my favorite hotel excluding the golf," he said. "It is an unbelievable facility."

Comment: Sawgrass closes to the public at the end of April prior to The Players Championship. A renovation following the tournament is scheduled to be completed by mid-November. A package from PGA Tour Experience before the closure starts at roughly $1,200 based on double occupancy for three nights at the Sawgrass Marriott Resort & Spa with single rounds on the Valley Course and PLAYERS Stadium Course.

A package through Marriott.com that included a single night's stay plus a round on the Players Stadium Course will cost between $544-$594 in March and $594-$624 in April. Summer rates are always the best bargain, mainly because of hit or miss conditioning.

Comment: Non-resort guests can book tee times at Spyglass up to three months in advance, a luxury not afforded at Pebble Beach. I can vouch for the beauty and serenity of Spyglass Hill Golf Course during a twilight round. I experienced one in 2003, my only time playing the course. Twilight tee times aren't a bad idea, except maybe in winter when darkness falls early.

Since Spyglass tends to be less crowded than Pebble Beach, running out of daylight is less of an issue. Buying the $340 Duke's Club Membership from the resort (mentioned above) provides the best prices -- $100 twilight rounds and $210 regular rounds.

Peak Rate: $350 plus $30 forecaddie required per person. Potential Discounts: None.

Comment: Booking a golf package is the only way to lower the green fee. The One Day Play Away package allows play on the Dye Course at French Lick Resort all day, or golfers can mix rounds on the Dye and Donald Ross Course starting at $485 per person based on double occupancy or $580 for a single at French Lick Springs Hotel.

The Hall of Fame package provides some savings as well, offering unlimited golf on the Dye for a day and on the Ross the next, ranging from $559-$709 per person per night. The required $30 forecaddie fee per person/per round is not included in either package cost.

Comment: Taking advantage of the winter savings would be your best alternative. My two rounds on the Ocean Course at Kiawah have been in November and January with manageable wind and plenty of sun.

A Golf or Gourmet Escape Champions Choice package that expired in March charged $400 for a room at the Sanctuary ($300 for a villa) and two rounds of golf, including the Ocean Course. An afternoon round on the Ocean Course after a morning round at another resort course only costs a $190 replay rate, but I'm not sure I'd want to battle this beast dog-tired and running out of daylight.

And they wonder why the number of people who play golf are decreasing.........

After watching the best players in the world hit great shots and still find the water why would the average golfer play Doral Blue Monster??  For almost $500 plus 2 sleeves of golf balls the average golfer would only be fustrated and demoralized to play this overrated course.