Golf Industry Show roundup: These new products may be coming to a course near you 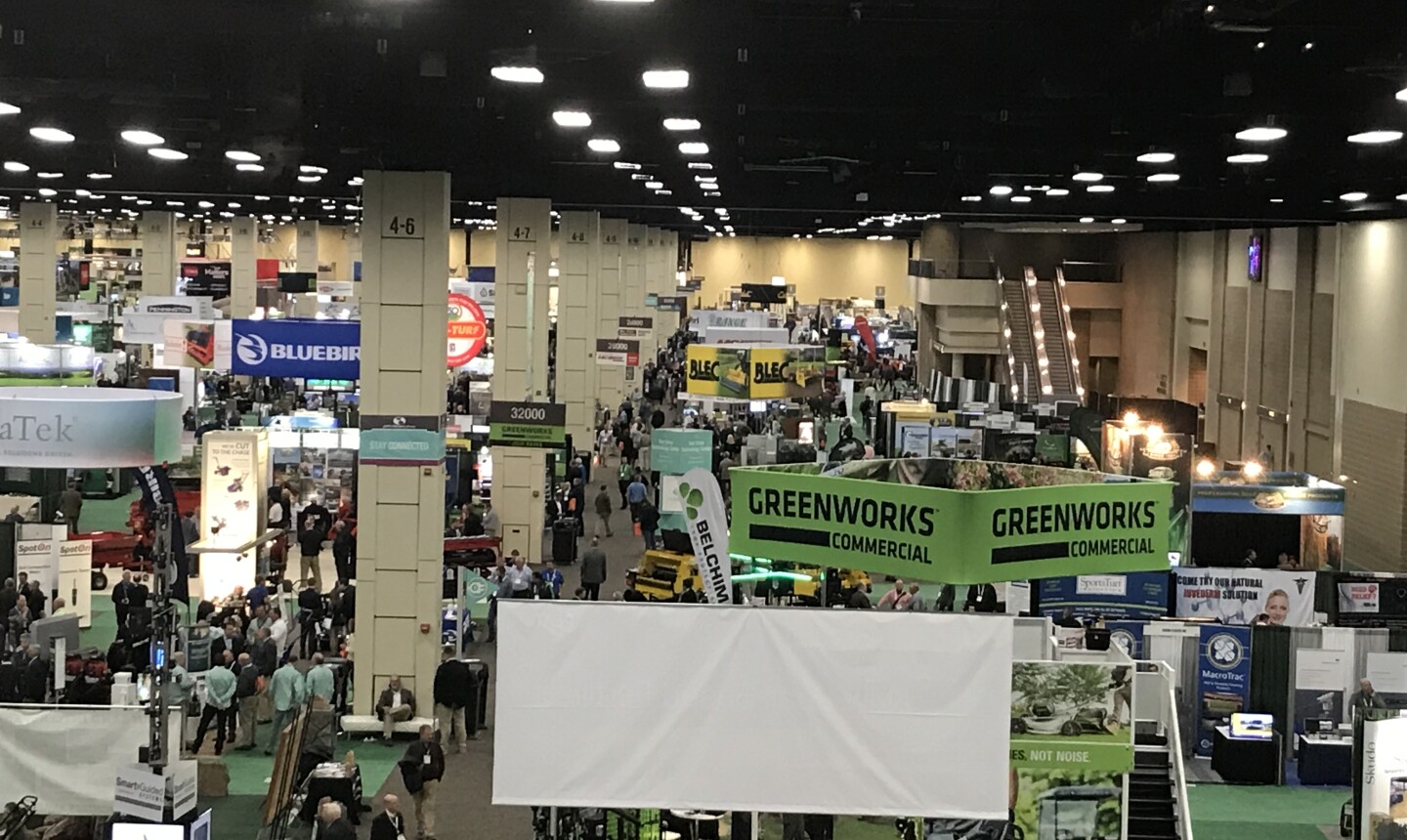 The 2018 Golf Industry Show in San Antonio brings together golf course superintendents, owners, builders and architects for a trade show under one roof. Mike Bailey/Golf Advisor 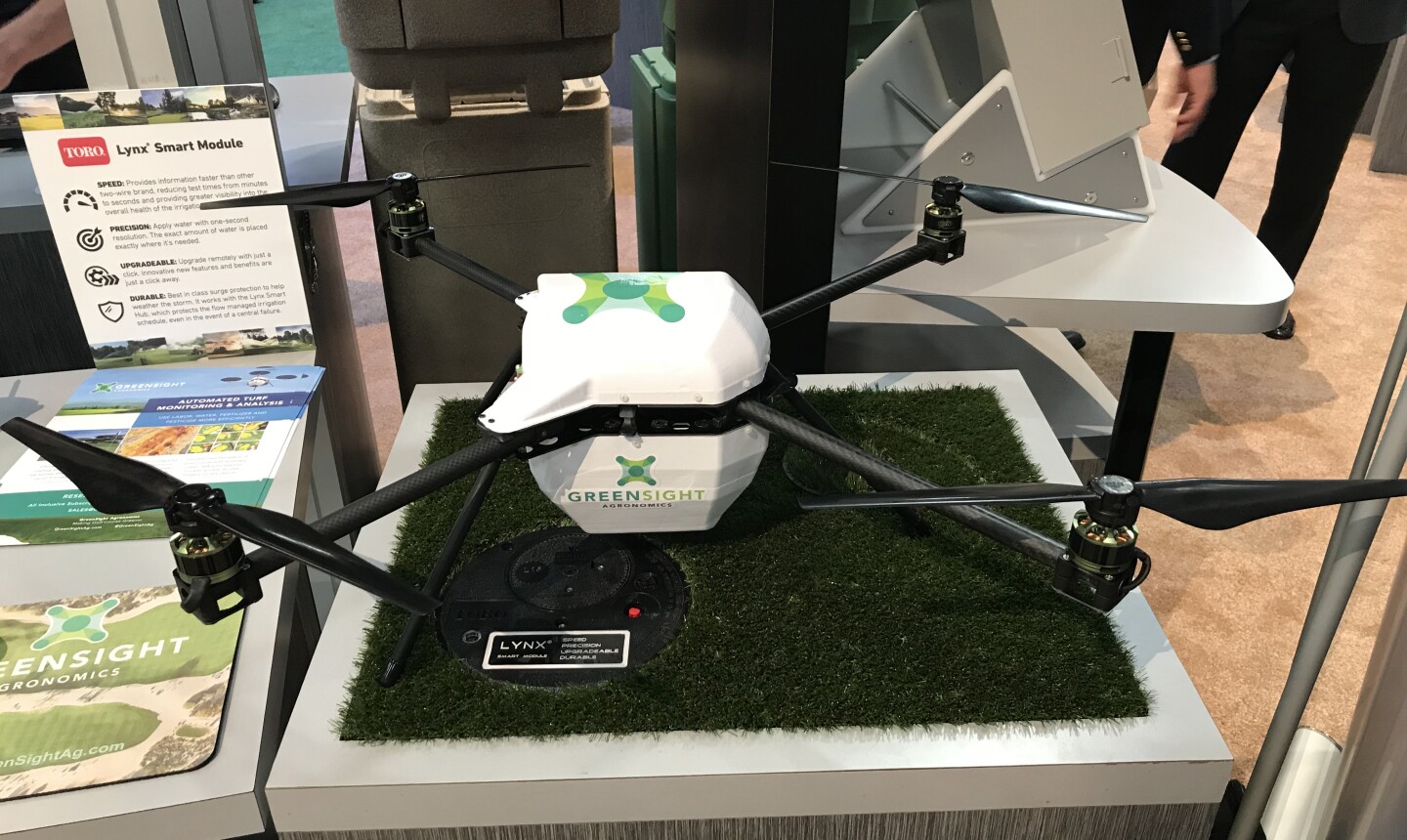 This drone by GreenSight can map out a course's need to precise irrigation and pesticide needs. Mike Bailey/Golf Advisor 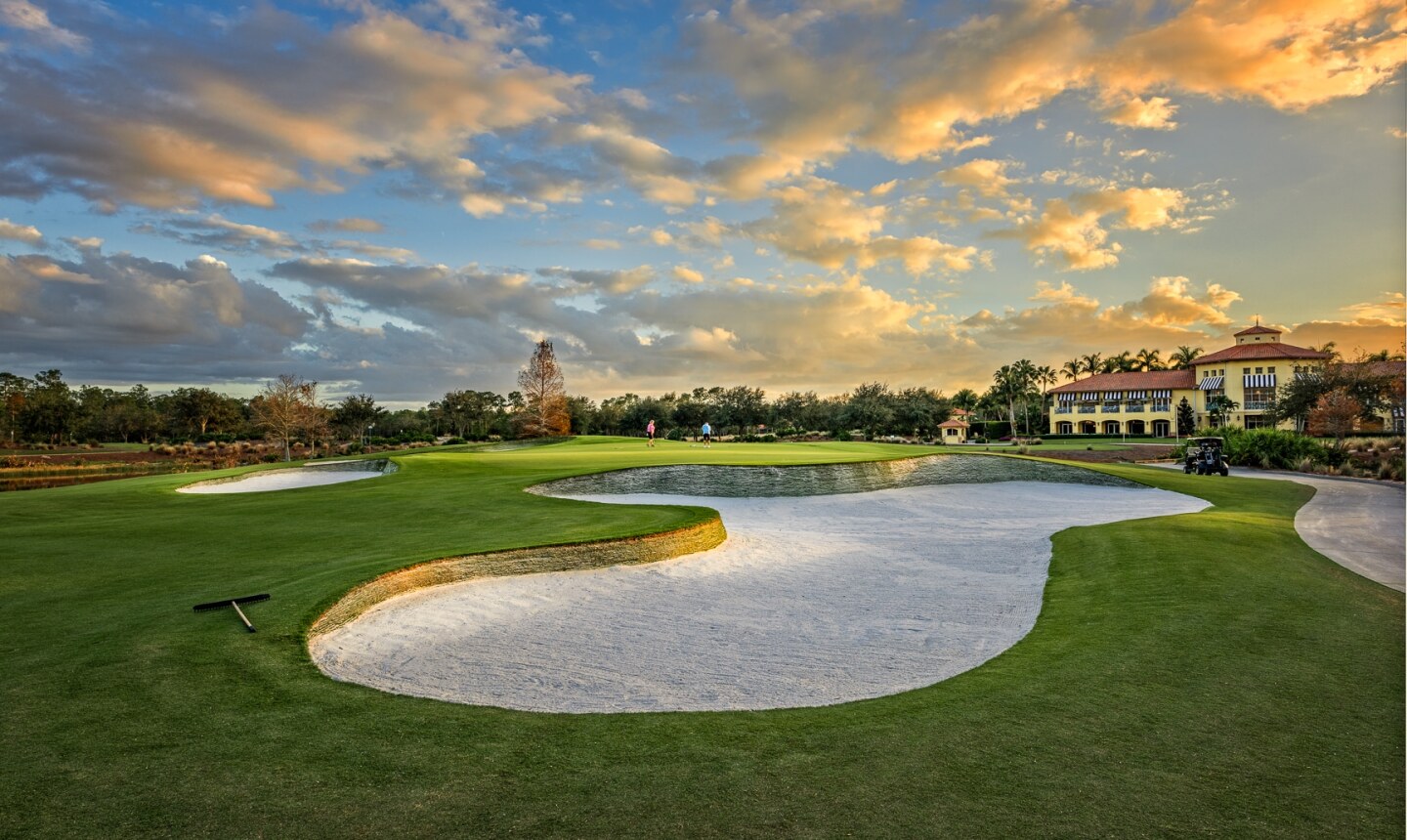 Tiburon Golf Club in Naples, Fla., is one of many golf courses around the world using Durabunkers. Courtesy of Durabunkers

Border collie puppies from Fly Away Geese, which is based in Charlotte, N.C. Mike Bailey/Golf Advisor 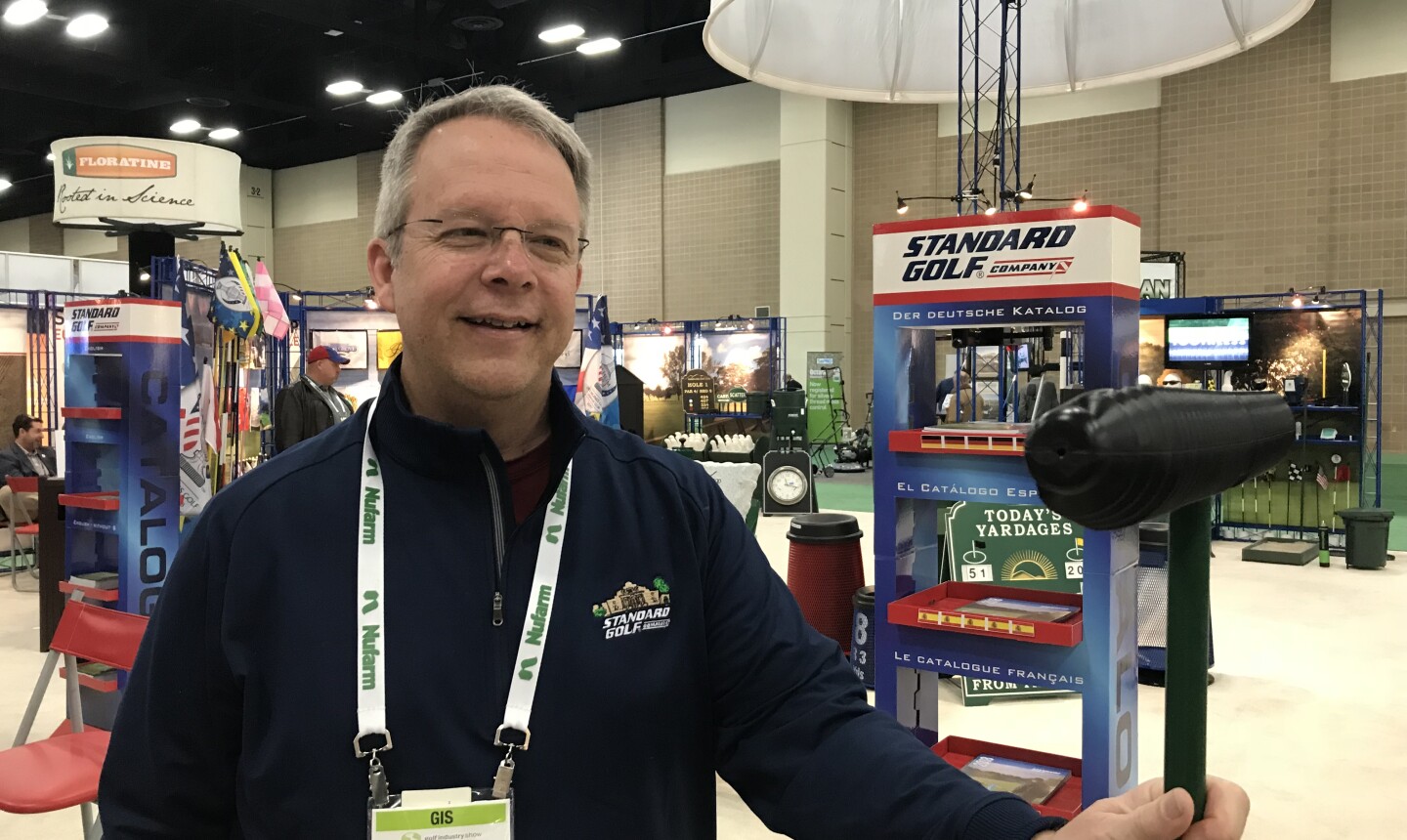 The Chief Pro Rake from Standard Golf was developed after a conversation with the superintendent at Oakmont. Mike Bailey/Golf Advisor 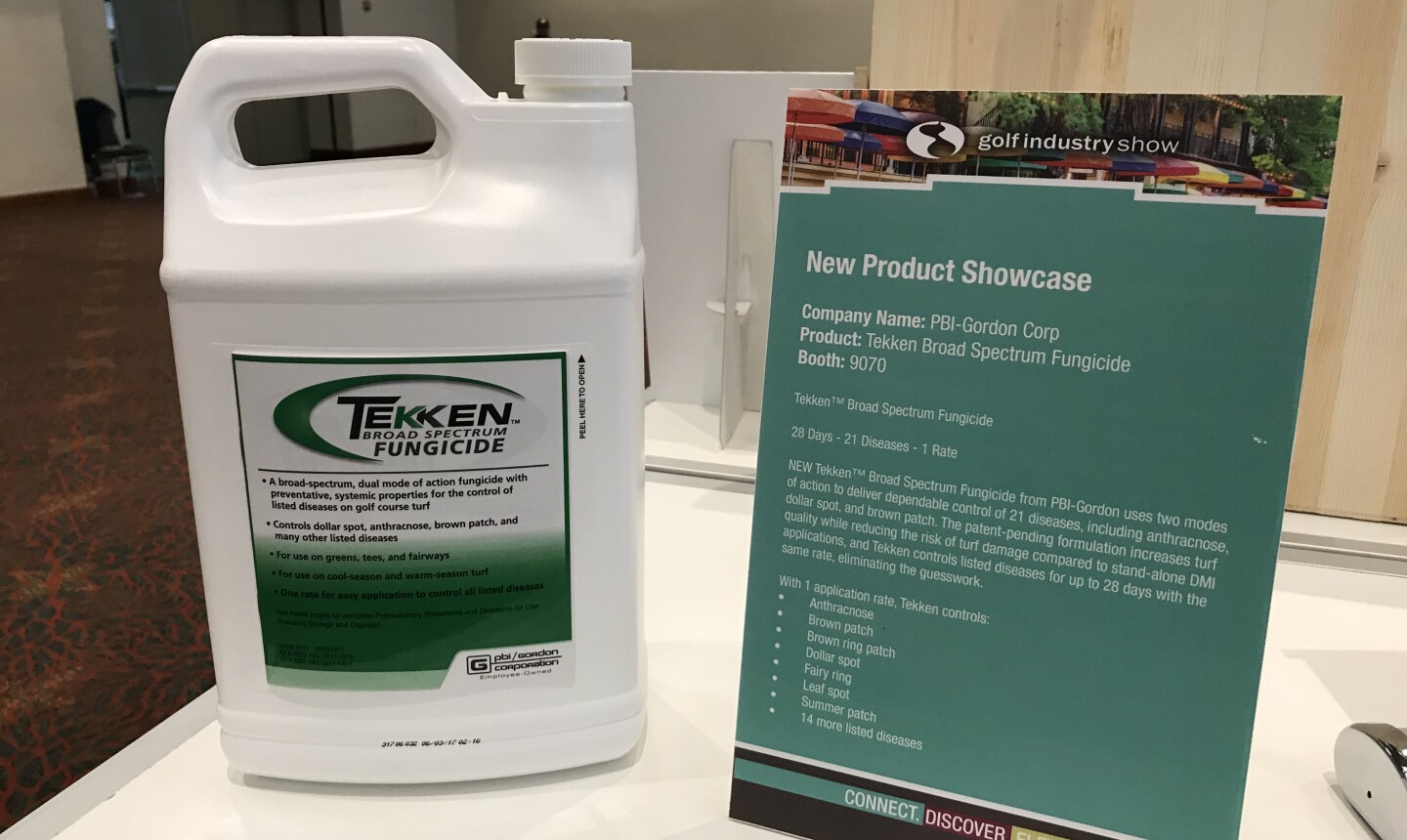 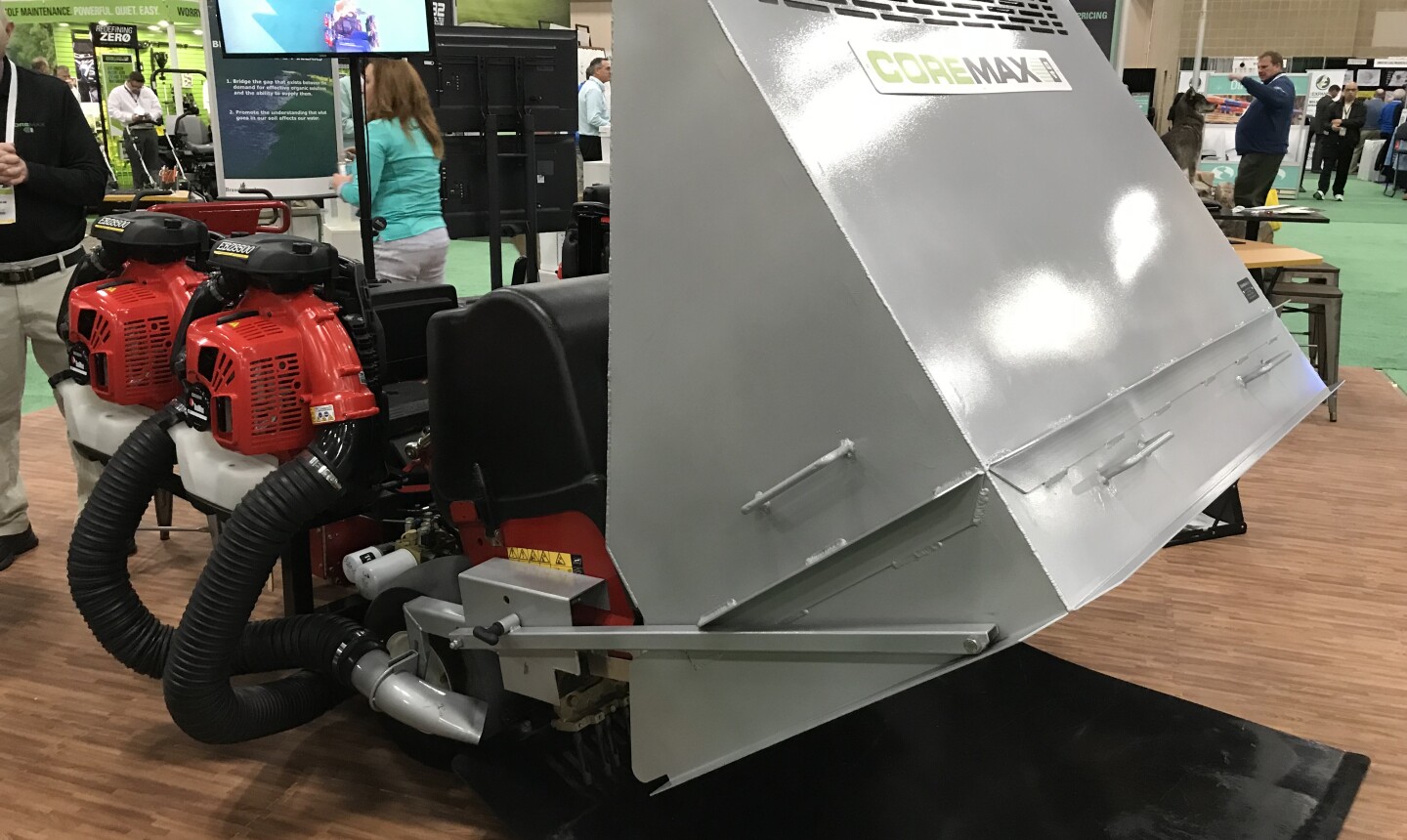 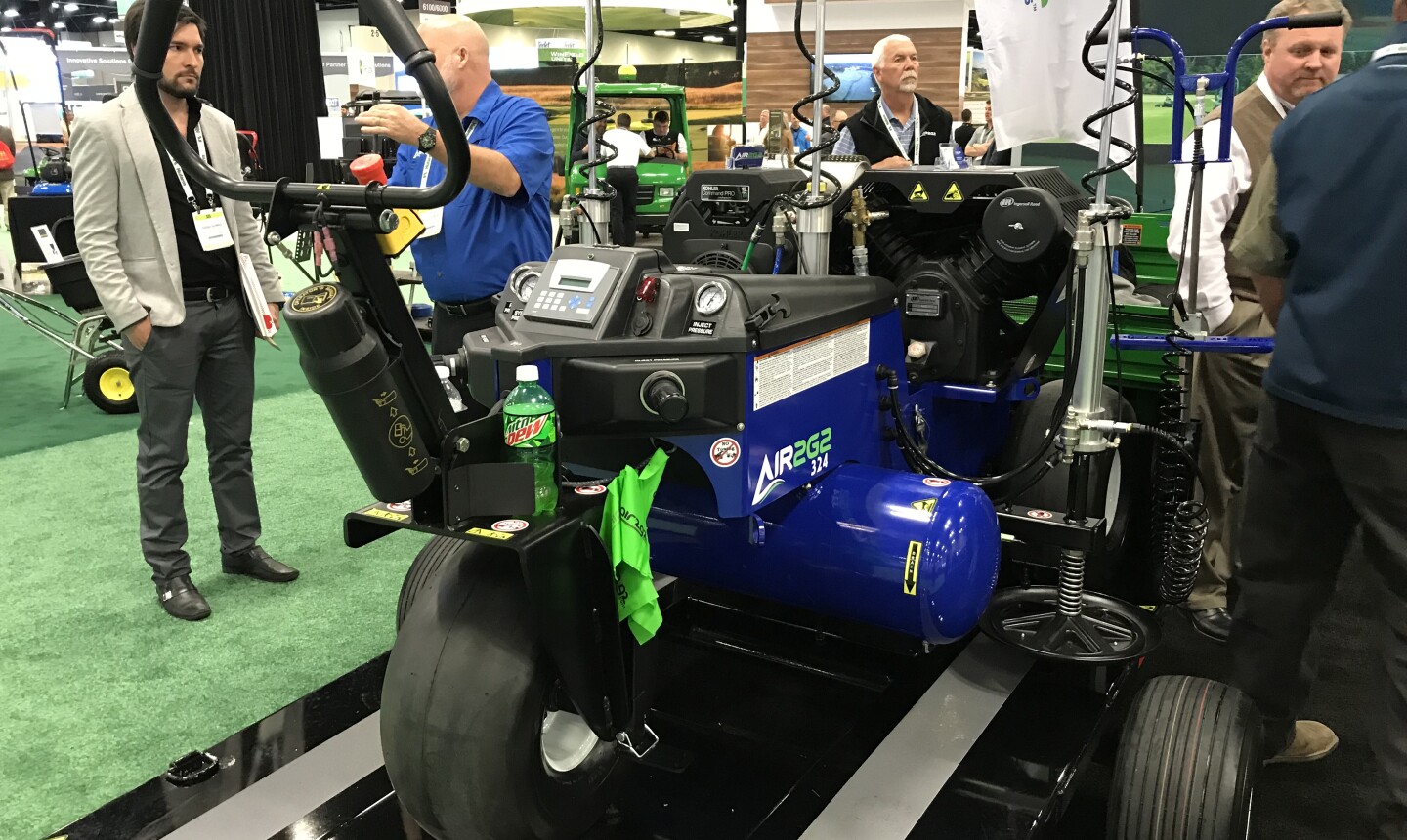 The Air2G2 machine breaks up compaction at and below the surface for healthier greens. Mike Bailey/Golf Advisor

San Antonio, Texas -- What's the most important aspect of a golf facility? It's the golf course, of course. It's what attracts golfers in the first place. Sure, customer service, food and beverage, lessons and all that other stuff is important, but without a well-conditioned golf course, it's hard to attract play.

Golf course maintenance is also the largest part of any golf facility's budget. A good superintendent is always looking for more efficient ways to maximize that budget to create a better playing surface while trying to keep costs down.

For golfers, this is pretty complicated. The big three equipment companies – John Deere, Jacobsen and Toro – are there, of course, as well as chemical giants like BASF, Bayer and Syngenta. They had the biggest booths at the show.

And like any trade show, there are plenty of new products and innovations. Here are eight I thought might be of interest to the average golfer:

Claiming to have the densest root system of any ultra dwarf, Sunday Bermuda, which is distributed by Atlas Turf International out of Georgia, is a new option for warm-season greens. Most recently, the grass was installed at a course in China. It took just three months for the new grass to establish on the greens at Shenzen Sand River Golf Club, which does 85,000 rounds a year. Sunday is said to be more disease resistant and cold tolerant that other greens grasses on the market.

Why it's important to golfers: Anytime there's a new grass, there's the potential for improved playing conditions for golfers, environmental benefits and less maintenance cost.

Drones can be used for a lot of things, including golf course photography. But in this case, GreenSight, which has entered a partnership with Toro Irrigation, offers a service that flies its drones over golf courses to map all sorts of things, including the technology to spot small pest and disease issues before they are visible as well as provide thermal mapping of moisture to help dial in computer-controlled irrigation.

Why it's important for golfers: Better and more precise irrigation translates into better turf conditions, of course, and it also means golf courses can save on watering, which in some areas of the country is the biggest part of the maintenance budget. Saving water, of course, is also good for the environment.

Durabunkers were featured on the 20,000 square-foot green constructed inside the Henry B. Gonzalez San Antonio Convention Center at this year's GIS. Manufactured by a company of the same name out of Wales, Durabunker is a geosynthentic bunker edge system that looks like stacked sod bunkers, but is much easier to maintain with greater stability. These bunkers have been appearing more and more at golf courses all over the world, and most golfers, if they didn't know they were artificial would think they're the real thing.

Why it's important to golfers: The beauty of these bunkers is they last much longer than traditional sod bunkers and don't get washed out, meaning less maintenance costs for golf courses, which could translate into keeping green fees down. It also means less down time after big rainstorms.

Those pesky geese and what they leave behind on greens and surrounds that are near ponds and lakes can be a big problem on golf courses. Killing the geese isn't an option most of the time for various reasons, plus it doesn't really solve the geese problem since there are always more to replace the ones that are eliminated. One solution is to have a dog that's trained to scare the geese away. One such company is Charlotte, N.C.-based Fly Away Geese, which breeds and trains border collies to quietly chase away geese from golf courses, effectively preventing goose damage, especially to greens. The pups start at around $5,000, which superintendents often buy for themselves and take with them if they go to a new course.

Why it's important to golfers: This is way more humane than shooting the birds, plus these particular border collies don't bark, so golfers never notice they are there. Plus, if they are effective, it means golfers avoid the unfortunate goose droppings often found on courses that aren't protected.

Video: Matt Ginella goes to the dogs of Fly Away Geese

The company that makes the Pro Rake, Standard Golf, was approach by Oakmont Superintendent David Delsandro last spring to design a rake that would promote the Aussie style of bunkers. Aussie bunkers have tight, smooth sides on the vertical areas of the bunkers, which ensure that balls will roll to the bottom of the bunkers. The new Chief Rake is designed with one side of it rounded and smooth to create that effect.

Why it's important to golfers: These harder packed smooth sides help prevent plugging the ball into the sides of bunkers. While bunkers are certainly meant to be hazards, nobody likes a plugged lie, which can often mean more multiple strokes lost.

Employee-owned PBI Gordon has a new fungicide that lasts longer and claims to control more diseases (21) than any other fungicide in the market prior. In case you were wondering what those diseases are, they include everything from Anthracnose to Bermuda take-all root rot to Dollar Spot (there are about two dozen more, too). Most importantly, Tekken is applied every 28 days as opposed to every 14-20 days like many other fungicides on the market.

Why it's important to golfers: In surveys, greens conditions ranked at the top of the list most important to golfers, and keeping greens free of disease is paramount to good greens. The fact that this fungicide is supposed to last longer means less will be applied, which is should be good for the environment.

Synatek, a a turf solutions company, has come up with a system that attaches to an aerator that allows greens to recover much faster than before after aerating. The system uses a proprietary plastic collector and blower system to collect the sand and silt in one step, decreasing the damage to a green causes by having workers walk all over the greens to collect the materials. This, in turn, maintains the integrity of the holes, which can then be filled perfectly with sand, allowing for an almost instantly smooth putting surface. The result is greens that that putt smoother much faster and with very little interruption.

Why it's important to golfers: Nothing irritates golfers more than paying good money to play a course shortly after its greens are punched only to find them basically unputtable. This new process allows for much quicker recovery, so much so, in fact, that greens can be fairly puttable the next day.

Among the things greens need are air and drainage, so when there's compaction at or below the surface, you can have problems. The Aiur2G2 CPR Machine promotes drainage and air by relieving compaction, especially on non USGA spec greens (old push-up greens, for example). The machine basically blows air into the green profile and breaks up the compaction, allowing for better airflow and drainage. It also doesn't disrupt play, so superintendents are finding that it's not only helpful, but it can also reduce the need for frequent aeration.

Why it's important for golfers: Again, anything that promotes healthy greens will help make golfers happy.

I was a member of the Idylwylde Golf & Country Club in Sudbury, Ontario. We HAD a HUGE Canada Goose problem until the club purchased a Border Collie that had been trained to chase geese. Jodie did a great job but had to retire after a few years because of a shoulder injury. She was so effective that the "resident" geese would leave when they saw my BC during the evening. Meg was my forecaddie. Very smart. The first time I took her with me she learned to stay off the green when I eventually got there. As soon as I pulled my putter she would go around to the back of the green and lie down. B C's are so smart.

Nice story, Kit. Thanks for sharing!

Kira K. Dixon
Lifestyle Correspondent
Now Reading
Golf Industry Show roundup: These new products may be coming to a course near you
New Cookie Policy
WE AND OUR PARTNERS USE COOKIES ON THIS SITE TO IMPROVE OUR SERVICE, PERFORM ANALYTICS, PERSONALIZE ADVERTISING, MEASURE ADVERTISING PERFORMANCE, AND REMEMBER WEBSITE PREFERENCES. BY USING THE SITE, YOU CONSENT TO THESE COOKIES. FOR MORE INFORMATION ON COOKIES INCLUDING HOW TO MANAGE YOUR CONSENT VISIT OUR COOKIE POLICY.
CONTINUE
Search Near Me