Golf making a big splash in the Virginia Beach area 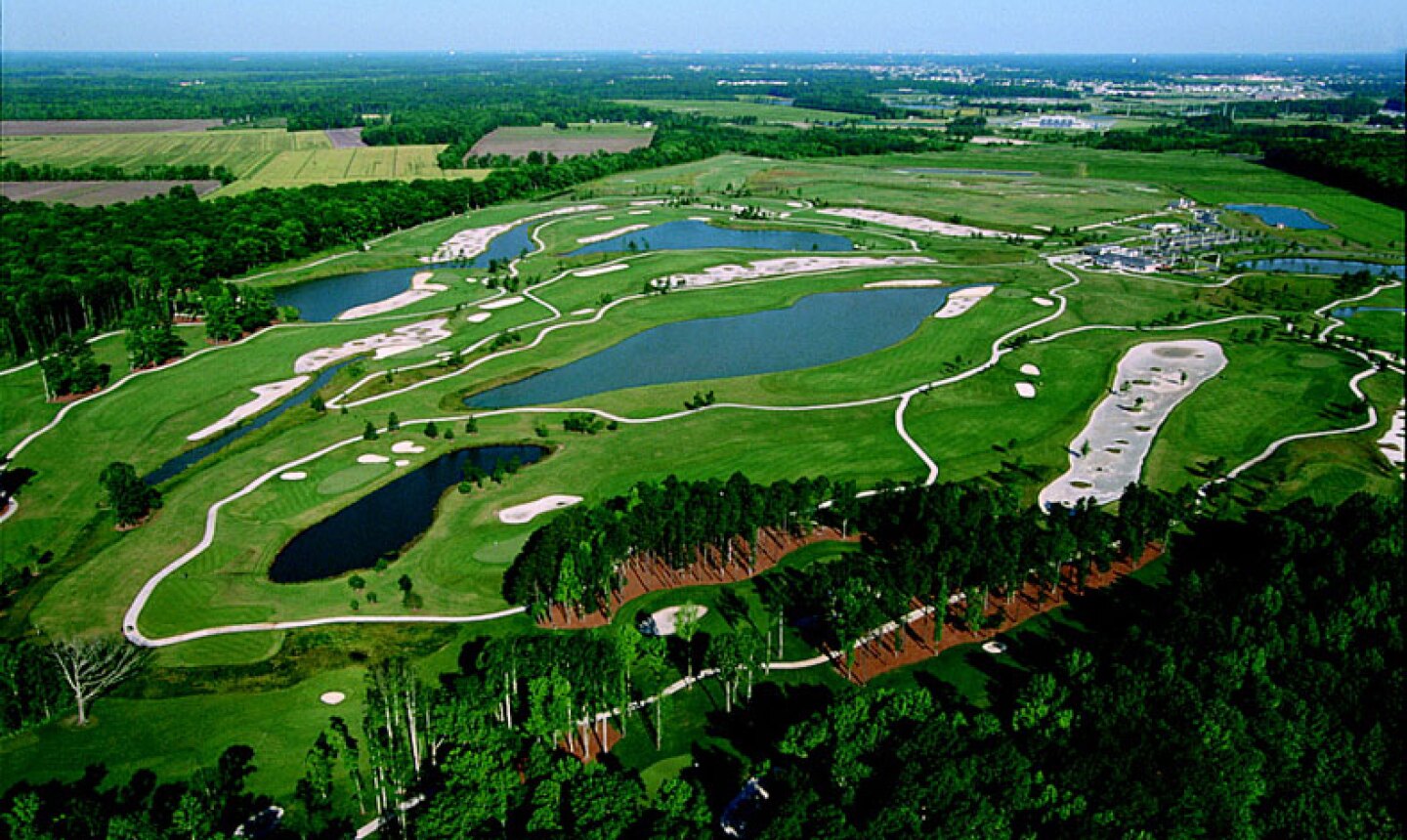 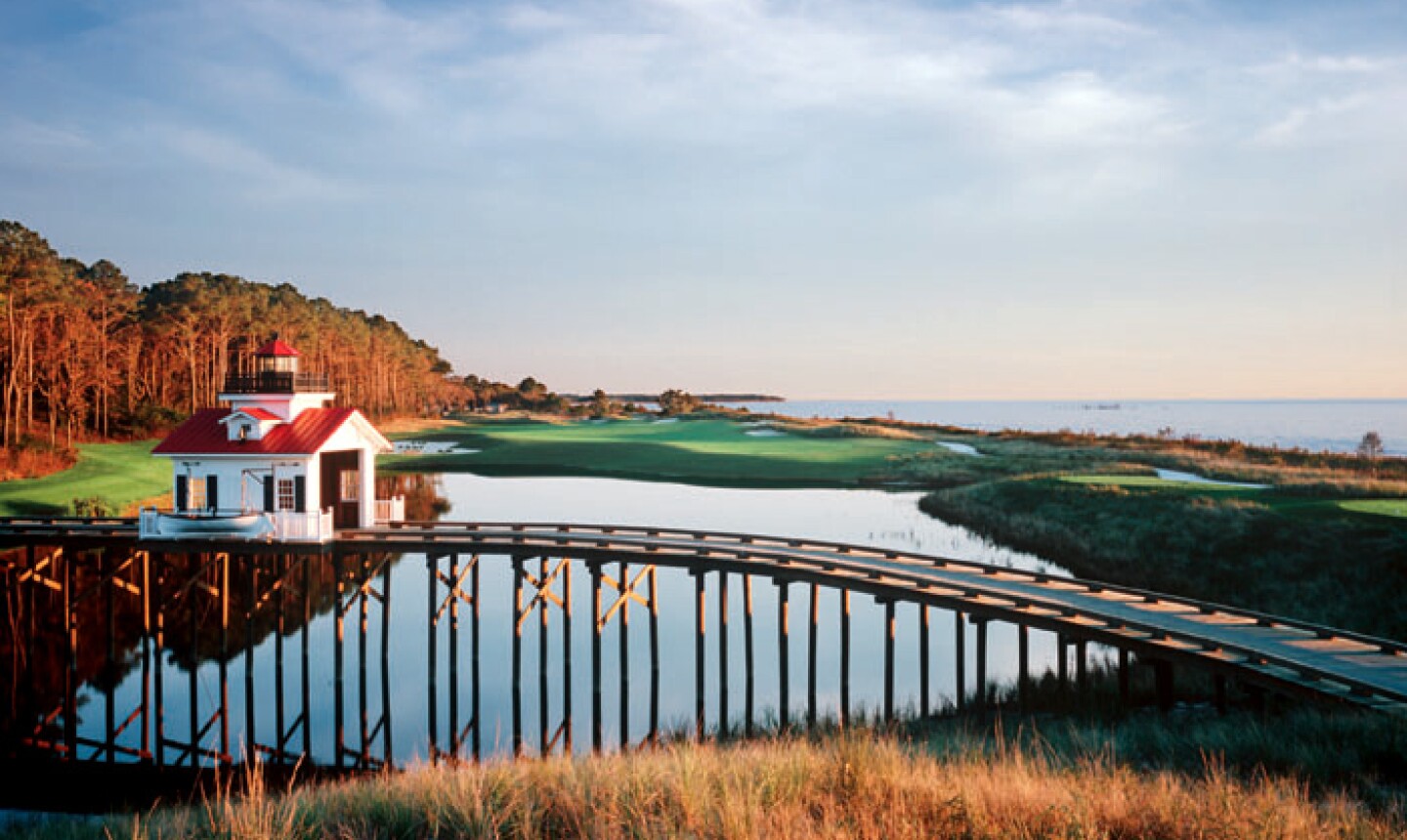 A cart bridge connects the fourth and fifth holes on the Nicklaus Course at Bay Creek Resort & Club. Courtesy of Nicklaus.com 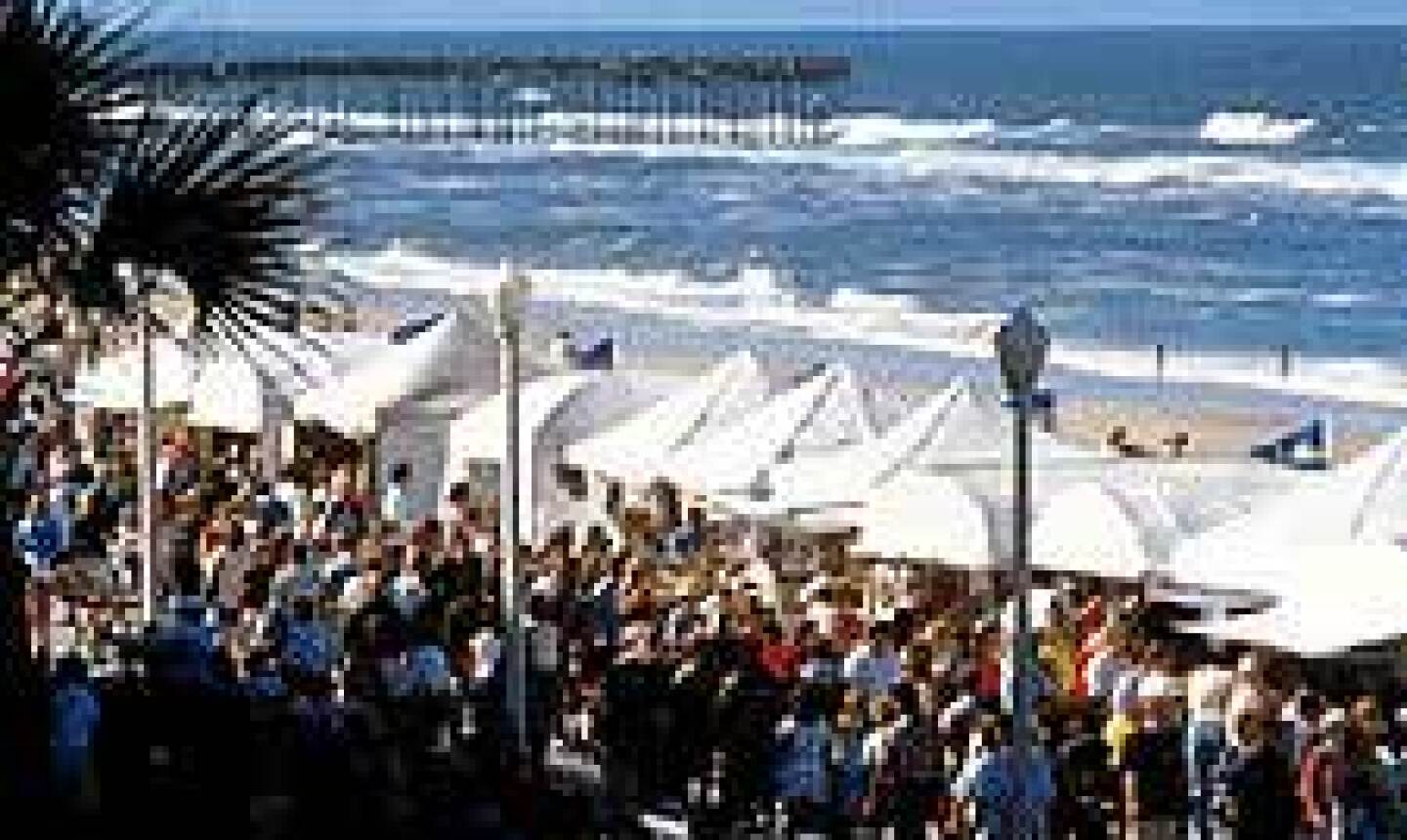 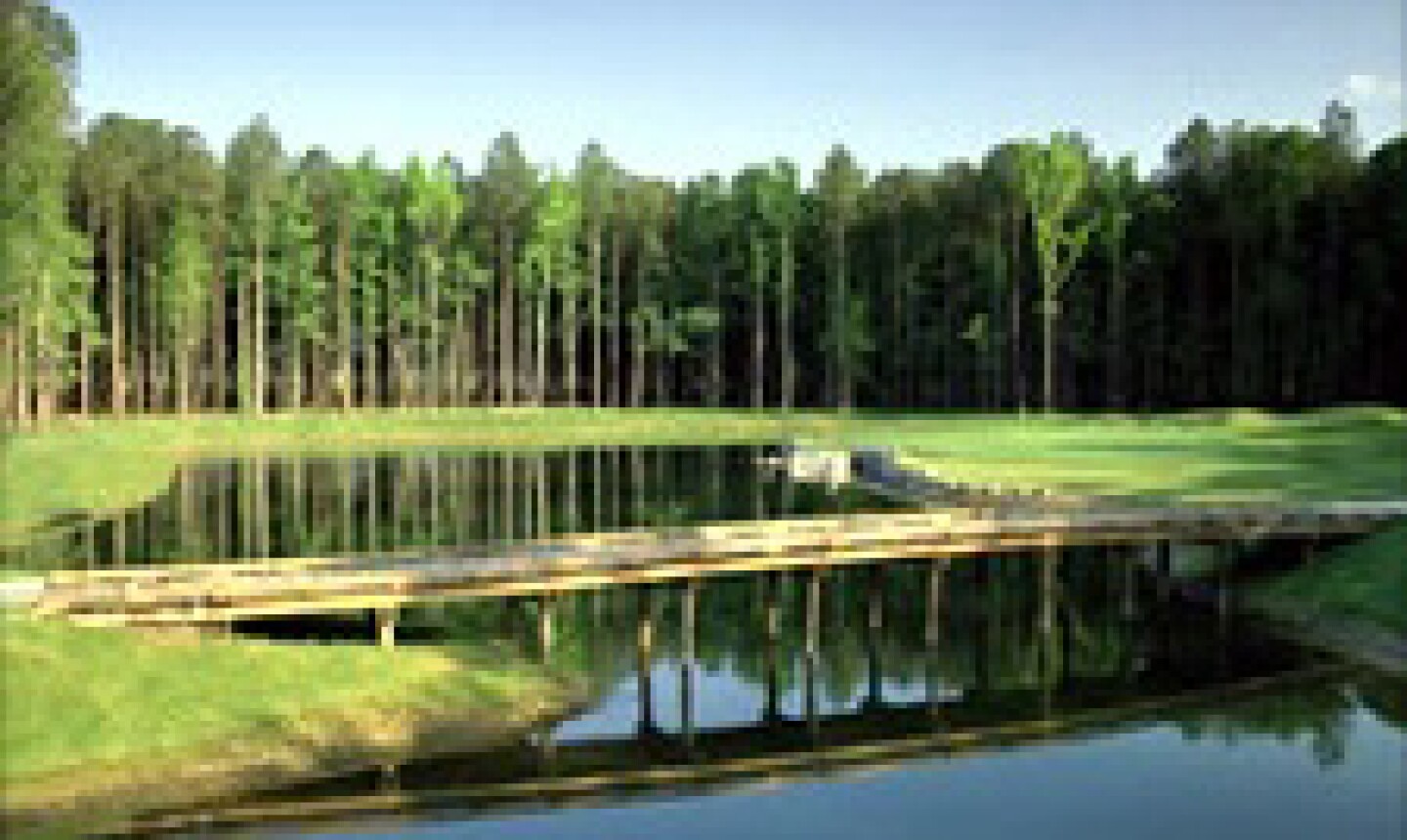 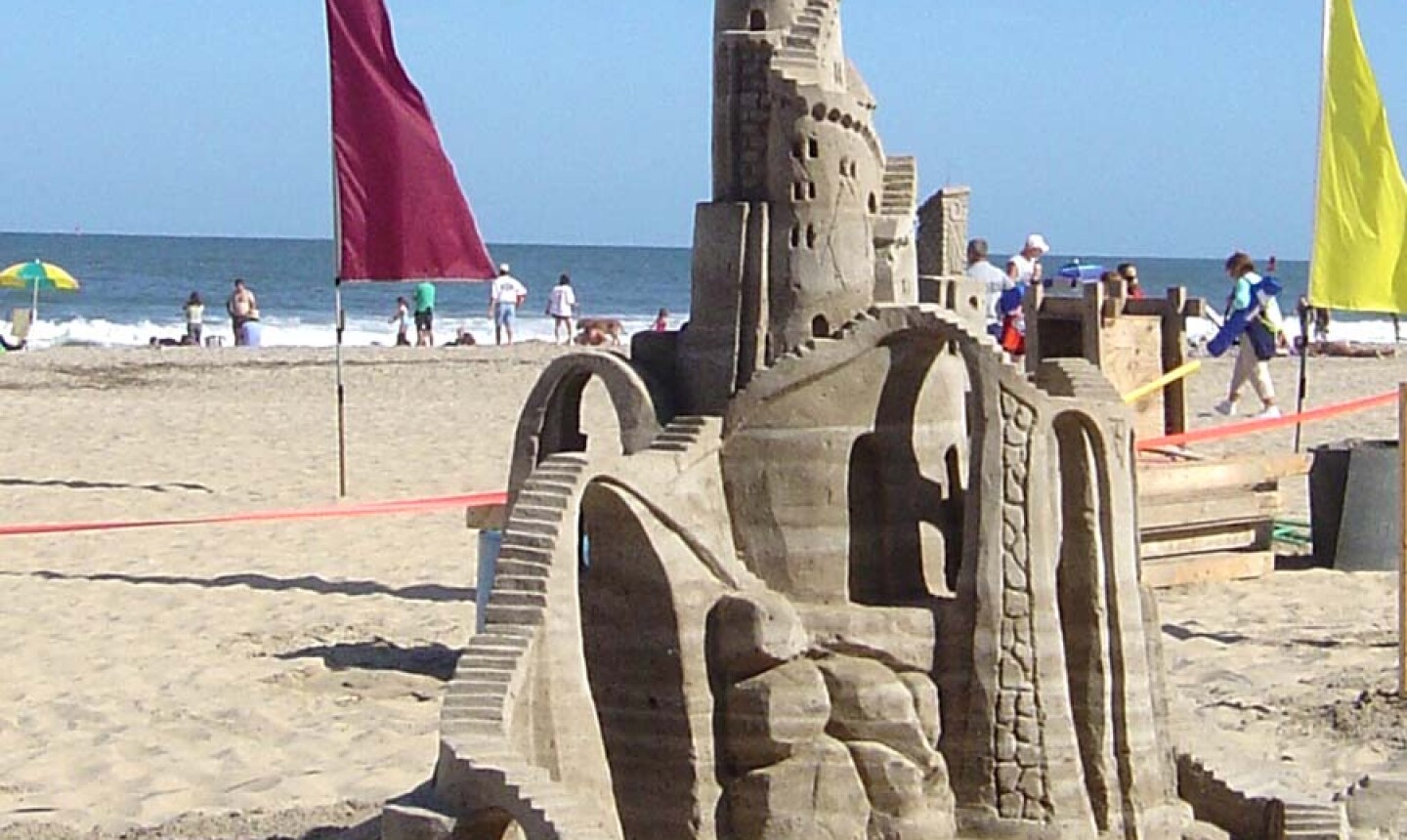 VIRGINIA BEACH, Va. -- If you take a stroll along the three-mile boardwalk here, chances are you'll run into people from all over the eastern half of the United States. After all, more than half the population of the United States lives within a day's drive.

Virginia Beach has long been a favorite summer vacation spot for families from the Carolinas to New England and from Tennessee to Michigan, not only because of its central location on the east coast, but also for its pre-Revolutionary War history and intrinsic Southern charm.

Here you'll also find the Navy's Atlantic fleet in Norfolk, Chesapeake Bay, great fishing, scores of parks and bike trails, and plenty of beaches. Quite naturally, the area is also growing as a prime destination for golf.

With year-round sunshine and mild temperatures for most months, the weather is also ideal for playing golf. Here you'll find courses designed by Arnold Palmer and Jack Nicklaus, as well as Pete Dye, Gene Bates, George Cobb and Rees Jones, all within 45 minutes of each other.

Perhaps there's no better place to start -- or end -- than Bay Creek Resort and Club, located on Virginia's eastern shore of Chesapeake Bay. Once again, a little healthy competition between the "King" and the "Golden Bear" spurred something that's good for golf, in this case two excellent courses at this 36-hole resort.

With Bay Creek's Palmer course, The King created a 7,250-yard layout that's both links style and traditional, taking advantage of the natural wetlands and shoreline, as well as the tall Virginia Pines. The Nicklaus Course at Bay Creek, with its signature bridge and four holes along the dunes and beach bunkers of Chesapeake Bay, is a difficult, but spectacular test.

Which golf course is better really depends on your mood and taste, according to Joe Burbee, director of golf at Bay Creek Resort and Club. And both are ranked among the best in the state by major golf publications.

Designed by Gene Bates with Fred Couples, Heron Ridge of Virginia Beach was the first public course to open in more than a decade, when it debuted in 1999. Heron Ridge features 13 holes with water hazards or natural wetlands and plays more than 7,000 yards from the "Boom-Boom" back tees.

One of the must-plays in the area these days is Virginia Beach National Golf Club, a softer Pete Dye design that's still challenging, but not as penal as some of this other famous works.

With input from Curtis Strange, Dye went with the lay of the land on this former farmland site, so there's plenty of room off the tee. Still, from the back set of tees, this 7,197-yard par 72 can play difficult, especially if the wind is up. The rating from the tips is 76.2 with a slope of 142.

As you might imagine, there are plenty of venues for great seafood and other local delights in the Virginia Beach area.

For fresh fish, you might want to try the Lynnhaven Fish House Restaurant, which overlooks Chesapeake Bay and the Chesapeake Bay Bridge Tunnel. Opened in 1979, this local favorite offers the largest selection of fresh catches in the area. Or you might check out Angelo's By the Sea, a family restaurant that, true to its name, overlooks the Atlantic.

Another popular choice is Rockefellers, with view across the Rudee Inlet. The Sunday brunch here is especially popular. You could also try Rudee's on the Inlet Restaurant and Raw Bar, which, in addition to fresh seafood and steaks, offers a variety of overstuffed sandwiches.

A Virginia Beach landmark, Abbey Road Pub and Restaurant (yep, there's a Beatles theme here), offers more than 100 varieties of beer from around the world in addition to fresh seafood, beef, pastas and homemade desserts. Or for reasonably-priced Italian fare, you can give Aldo's Ristorante in Virginia Beach a try.

Where to stay in Virginia Beach

Not surprisingly, many of Virginia Beach's hotels and resorts are plugged into the golf scene, offering attractive packages.

The Breakers Resort Inn, for example, located on Atlantic Avenue, offers competitive rates for golfers who want to stay two or three nights or more and play the courses in the area. Large suites and oceanfront rooms feature private balconies as well as a fridge, microwave and free high-speed Internet.

For a luxurious stay right on the beach, check in at the 21-story Hilton Virginia Beach Oceanfront, known for its rooftop pools and Sky Bar.

The recently renovated Oceanfront Inn is close to all of Virginia Beach's great shopping and restaurants on the boardwalk. The Holiday Inn Surfside is another property with great ocean view rooms, free Internet and a heated indoor pool. Or try the Comfort Inn Virginia Beach, which features 137 updated guest rooms, free full hot breakfast and indoor and outdoor heated pools.

Virginia Beach: More to do than golf?

One of the best and least expensive things to do in Virginia Beach is to stroll along the newly renovated Boardwalk, from 1st to 40th streets. Along the way you can visit shops, bars and cafes as you check out the sculptures and parks that line the route.

More ambitious walkers can climb the stairs to the top of the old Cape Henry Lighthouse and see where the settlers first landed here in 1607. There's the Oceana Naval Air Station and Jet Landing Observation area, where you can watch real F-14 Tomcat and F-18 Hornets.

Or check out the Virginia Aquarium & Marine Science Center. This marine environment showcases 300-plus interactive exhibits and more than half a million gallons of aquariums, as well as an IMAX theater.

If spas are your thing, there are plenty to choose from in the ares, including the unique and holistic Edgar Cayce's A.R.E, or Association for Research and Enlightenment, which is located in a big, historical house on 67th Street.

Edgar Cayce was a pretty famous psychic, among other things, and you can get the "Cayce/Reilly" treatment, which avid golfer Bob Hope received regularly in his advancing years.

Getting to Virginia Beach

You can reach the Virginia Beach/Norfolk area via I-64 from the West or Interstate 95 and I-85 from the north and south.

If you fly in, you'll probably want to go to Norfolk International Airport, which is 20 miles from the Oceanfront and serviced by most major airlines.

You could also take an Amtrack train or captain your own boat up the Atlantic Intracoastal Waterway, which runs all the way from Miami to Boston. 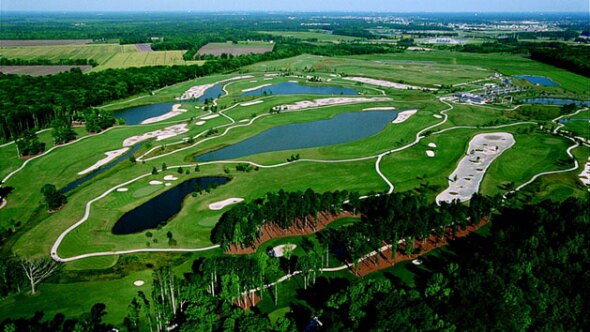 Articles
2 Min Read
Virginia Beach National a kinder, gentler Pete Dye golf course
The words "playable by all levels" or "generous fairways" usually don't come to mind when describing a Pete Dye golf course. But those are descriptions you can believe when it comes to Virginia Beach National. This former TPC course has some typical Dye features, but lacks the sharp edge found on many of his courses. 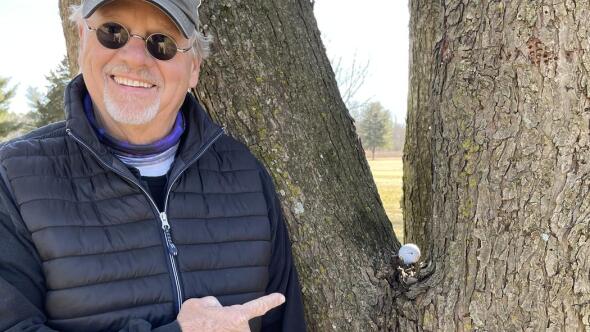 Kira K. Dixon
Lifestyle Correspondent
Now Reading
Golf making a big splash in the Virginia Beach area
New Cookie Policy
WE AND OUR PARTNERS USE COOKIES ON THIS SITE TO IMPROVE OUR SERVICE, PERFORM ANALYTICS, PERSONALIZE ADVERTISING, MEASURE ADVERTISING PERFORMANCE, AND REMEMBER WEBSITE PREFERENCES. BY USING THE SITE, YOU CONSENT TO THESE COOKIES. FOR MORE INFORMATION ON COOKIES INCLUDING HOW TO MANAGE YOUR CONSENT VISIT OUR COOKIE POLICY.
CONTINUE
Search Near Me