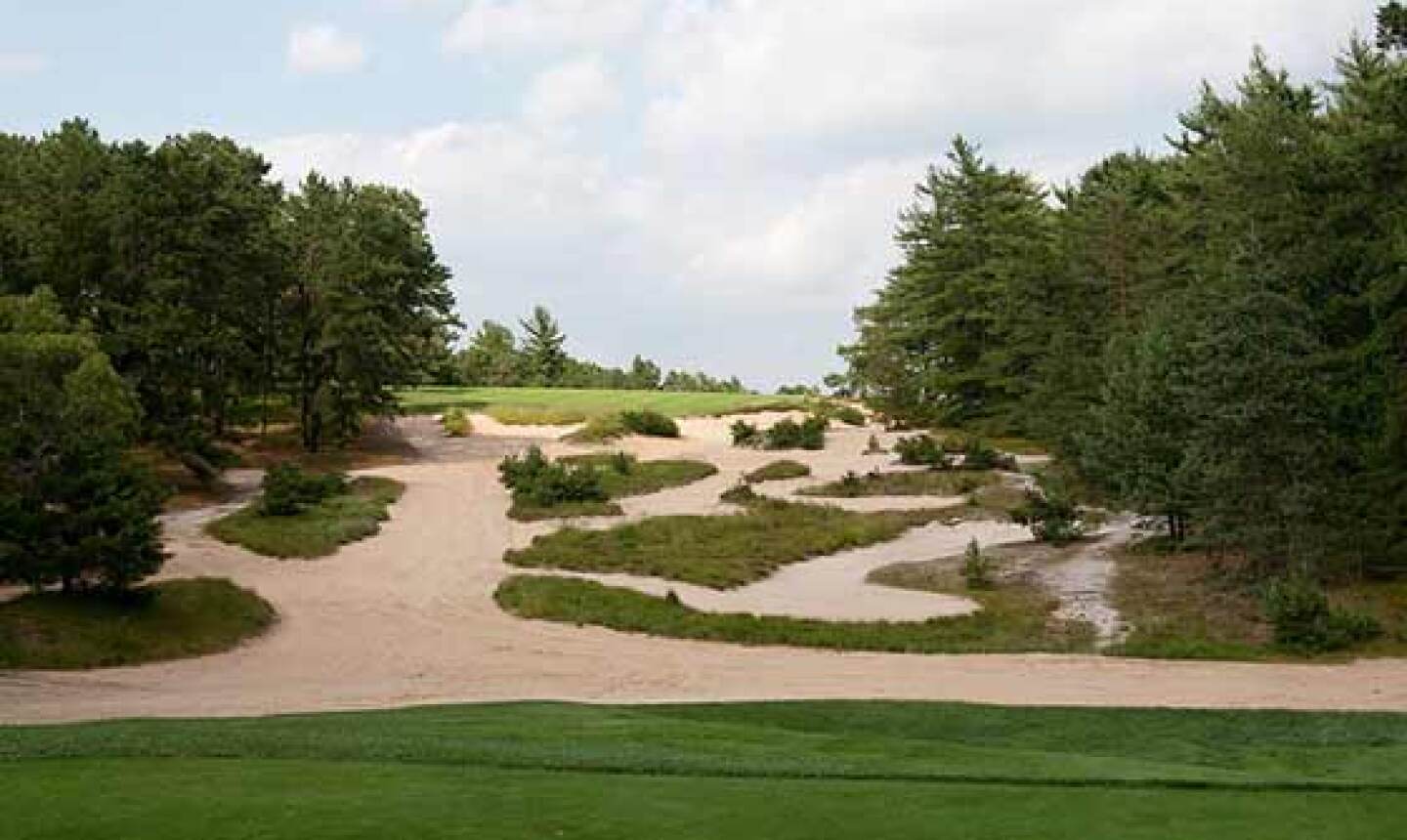 Pine Valley Golf Club is one of golf's famous "fortresses," but there are ways to get on as a non-member.

This is a big week for golf, and I'm not talking about the Ryder Cup.

I'm talking about the rare opportunity for you to get on New Jersey's Pine Valley Golf Course, widely regarded as the best golf course on the planet.

And you don't even have to grovel.

This isn't a chance to "play" Pine Valley, but rather a chance to get inside the gates and onto the golf course.

"Argh, too good to be true," you're probably thinking.

But this experience is still very cool.

Here's the deal: each year, Pine Valley hosts the premier amateur golf tournament in America, the Crump Cup (in honor of the club's founder, George Crump), and the public is invited to watch the final round.

This year, it's Sunday, September 30.

Unlike pro tournaments, where you only see the golf course from outside the ropes, in this intimate event, you can walk Pine Valley's fairways right alongside the players.

And make no mistake: these guys are "players;" elite amateurs from across America (often including some former members of the PGA and/or Champions tours).

That said, if you're simply interested in seeing Pine Valley "up close and personal," and at your own pace, it's often possible to walk certain holes all by yourself. As you can imagine, the "galleries" are thin because few people know this opportunity exists.

If you'd like to go, here are the details:

What: The 2012 Crump Cup (final round, match play)
Where: Pine Valley Golf Club (Clementon, NJ 08021)
When: Sunday, September 30 (opens to public at 1pm)
Price: $20
Details: Park at the nearby Clementon Amusement Park (144 Berlin Road, Clementon, NJ 08021; clementonpark.com) where a shuttle bus will take you to and from the course. No cameras or cell phones are allowed, so, if you want to memorialize your visit, um, be discreet about it. You may want to bring your own snacks, too, as there's no food or beverage service.

Craig Better
Craig Better is one of the founding editors of Golf Vacation Insider. In addition to traveling to 15 foreign countries, he has twice traveled across America to play golf courses in all 50 United States. Prior to joining Golf Vacation Insider, Craig was a freelance writer who contributed to GOLF Magazine, Travel + Leisure Golf, Maxim Magazine, USAToday.com, and co-authored Zagat Survey’s book, America’s Top Golf Courses.
17 Comments

Is the public allowed to buy merchandise at the pro shop...

When is 2018 tournament and what is the link to sign up?

When I was in high school in 1965/66, I was a caddie there. What a great place and opportunity to get paid to exercise! Got $12 a bag and usually carried doubles! Often got additional tips to! The caddie master back then was Tom Elder. We used to fore caddy to keep things moving along. And yes, we "may" have given the players some better lies from tome to time! It was a one mile walk from my house. (Grandview Dr.) I asked what the population of Pine Valley was once. I was told 18 million. "How is that possible?" I asked. I was told actually it is 18 millionaires! Some corporations like IBM and the automakers kept cottages to wine and dine their clients. I'm 69 tomorrow (11/8/2016) and I miss those times.

I think the great lore is not being able to play the course, or how hard it is to get an invite. But truth be told it is like a high end public course. Everyday it is a member and 3 guests who play the course. Only two times a year it is for members only, Members weekend in May and the Canada Cup in the fall. The condition is not that of Augusta, heck the bunkers are not even raked. Sometimes the grass gets burned out and in the summer and the greens are slower than normal. To keep a real score is just about impossible. Any tee time early has to be done under 4 hours, later tee times you must play in 4 hour and 10 minutes. Granted this rule doesn't always get obeyed. For example the Senior member guest the rounds are 5 hours plus. You must take a caddie, the rate is around $110 per player, however not all the caddies follow the rules of the game, kicking balls out of bushes, out of bunkers and everything unethical to try to kept the game moving and trying to score an extra tip. The advise and green reading depends on the caddie you are given, some are good and some not so good. If you are over a 10 handicap, just know you are not trying to keep a real score. Sometimes the mindset is to do that but when you lose 2 balls and hit 20 bunker shots you pick up and move on. The course plays its best in the fall, in the summer they are trying to save the course. From the Tips you need to carry the ball about 280 yards to have a chance. From the normal tees it is not long, but it will paper cut you to death. You need to hit fairways and greens. Than the green complexes are very difficult to play. Very rare to get a flat putt. Birdies are rare, to make 5 or 6, you need to knock out flags or get the shorts holes, 8,10,12 &amp; 17. Only two Par 5's both are the real deal. Like hole 4 or 16 from the tips you need to carry at least 270 in the air just to have a long shot in to those greens, you can add 13 &amp; 18 to that list as well. 18 is fair, but any greenside bunker your done. To go around with no doubles or higher you have done well. You can play a great round on the course and play it again an be off a bit and shoot a big number. Because of the pace of play, the course has become a lot easier to the better player. Lots of bushes, scrub brushes and other wild stuff have been removed. Some talk has been in the works for adding in a new tee on 6, taking out the house and a new tee on 17. The guy who wrote about the caddie watching him on the range is a lie, the caddies meet the players by the club house and walk with them to the 1st tee.

I was fortunate enough to be able to play Pine Valley a few years ago, and loved it. I played the Short Course on Monday and the regular course on Tuesday. It is the round of golf that I am the most proud of that I have ever played because of where it was. I shot 75 with three 3-putts. The caddie was very helpful with the putts, but over clubbed me on every shot. So after the first couple of holes I used one club less than he said. Great experience!

I am the niece of Warner Shelly who lived on Pine Valley, Author of Pine Valley the Chronicle. . Visited often. Have a lot of Pine Valley trophies and memorabilia which I inherited from my uncle. Nice to see people value the course, however after leaving my uncles home about 15 years ago we stopped at the pro shop to buy something for his brother (my Dad) and the guard stopped me before my foot hit the parking lot because i was a woman.

Very first time at Pine Valley the best golf course on the planet We had the privilage to attend the Crump Cup finals on Sept 29 2013.We would like to thank all invoved that made our day a most me morable experience. Hopefully they will contiunue this tradition to enable us to attend this event another time .Thank You again

The Date was November 5th 2005 when I was invited to play this historic course. The weather was in the 60's just perfect for that November day. What a experience of a life time. I doubled bogeyed the 18th to shoot 90. I will never forget that day.

The next year I was able to play Pebble Beach and Spyglass while staying at The Lodge. Another wonderful experience. I shot 90 there aswell.

I have been blessed.

If you're a golfer, do yourself a favour, #1 go to Scotland, travel to Musselburgh, rent some hickories and play the Old Course Links, #2 Go to see the Crump Cup at Pine Valley. Look it up on line, it takes place on the last week of Sept. and, although you cannot play the course, walk it! It's truly one of the most beautiful courses in the world.............Seriously!

Tim Gavrich
Senior Writer
Now Reading
How to Get on Pine Valley Golf Course...Yes, THAT Pine Valley
Search Near Me