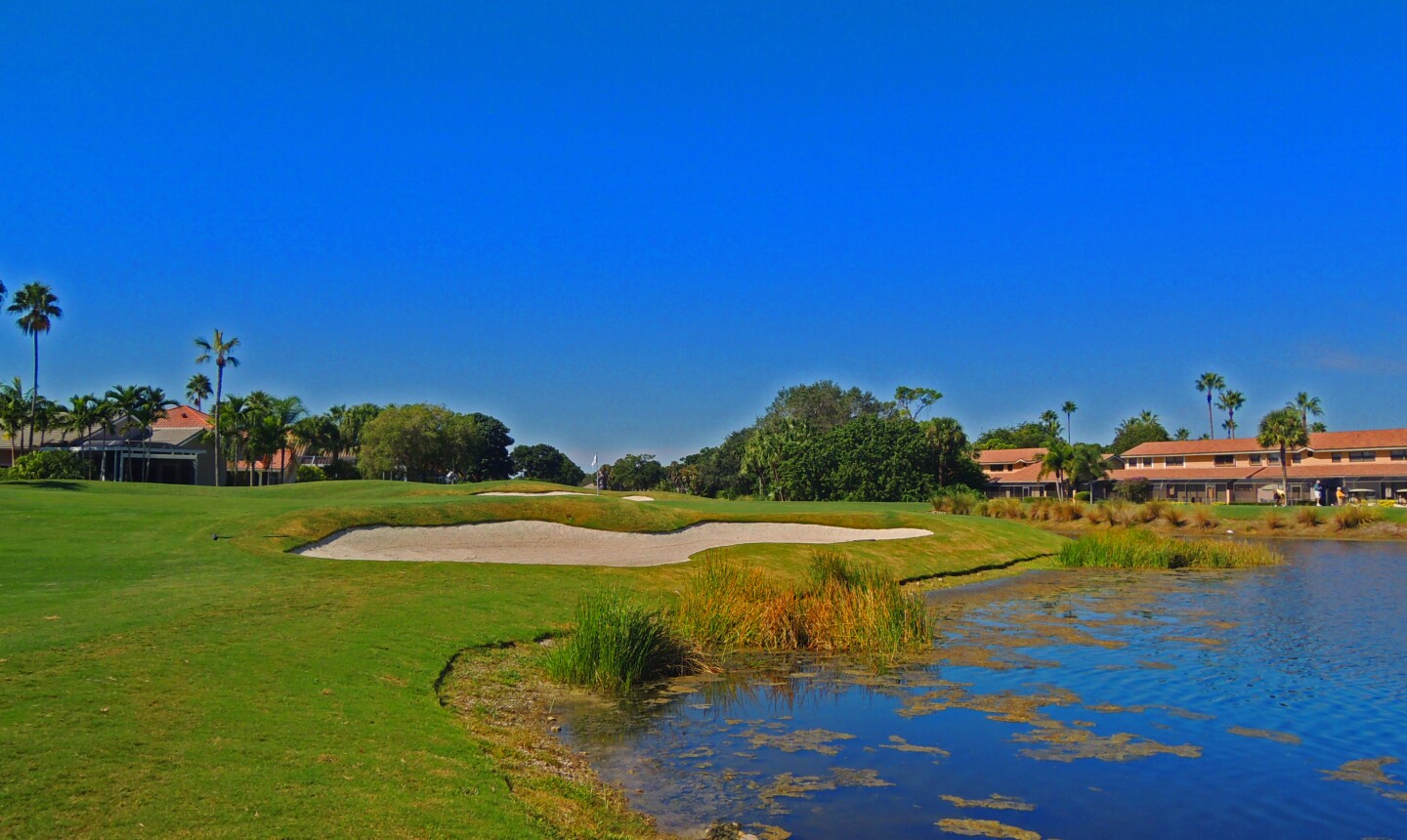 Jack Nicklaus moved the green more toward to the water on the Champion Course's 14th hole. Mike Bailey/GolfAdvisor 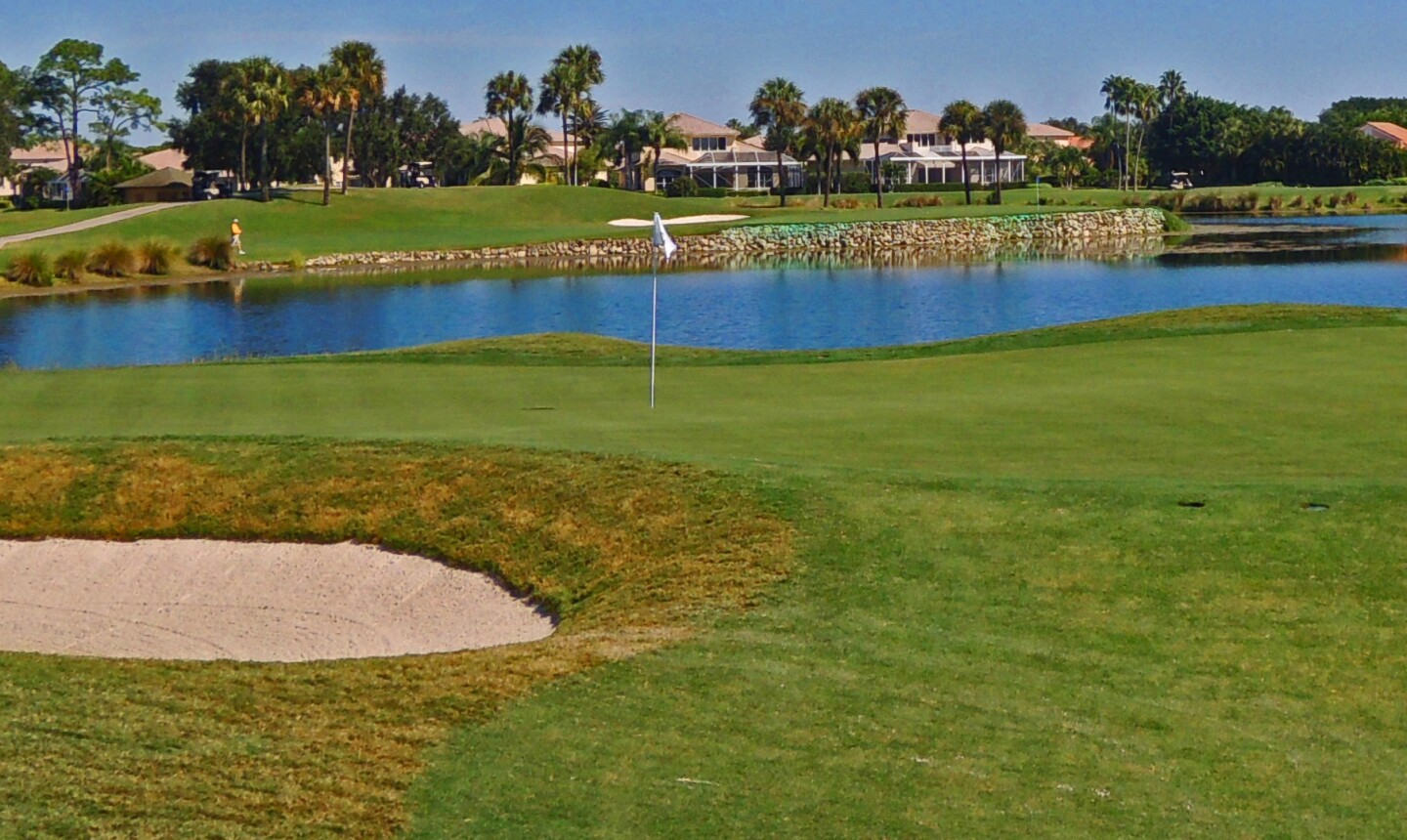 A view from the left side of the 14th green on PGA National's Champion Course. Before the changes, the green was closer to the homes and OB stakes. Mike Bailey/GolfAdvisor 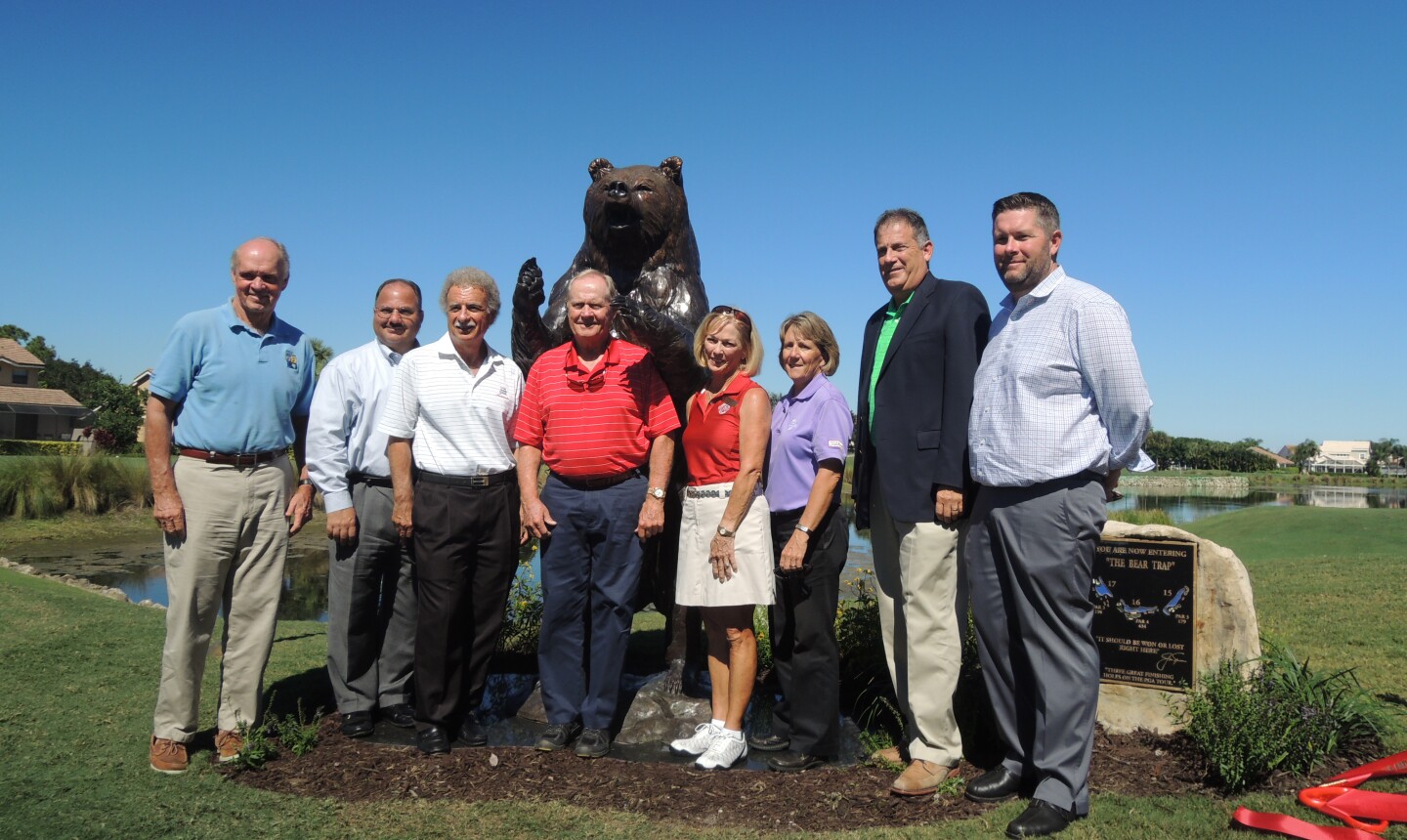 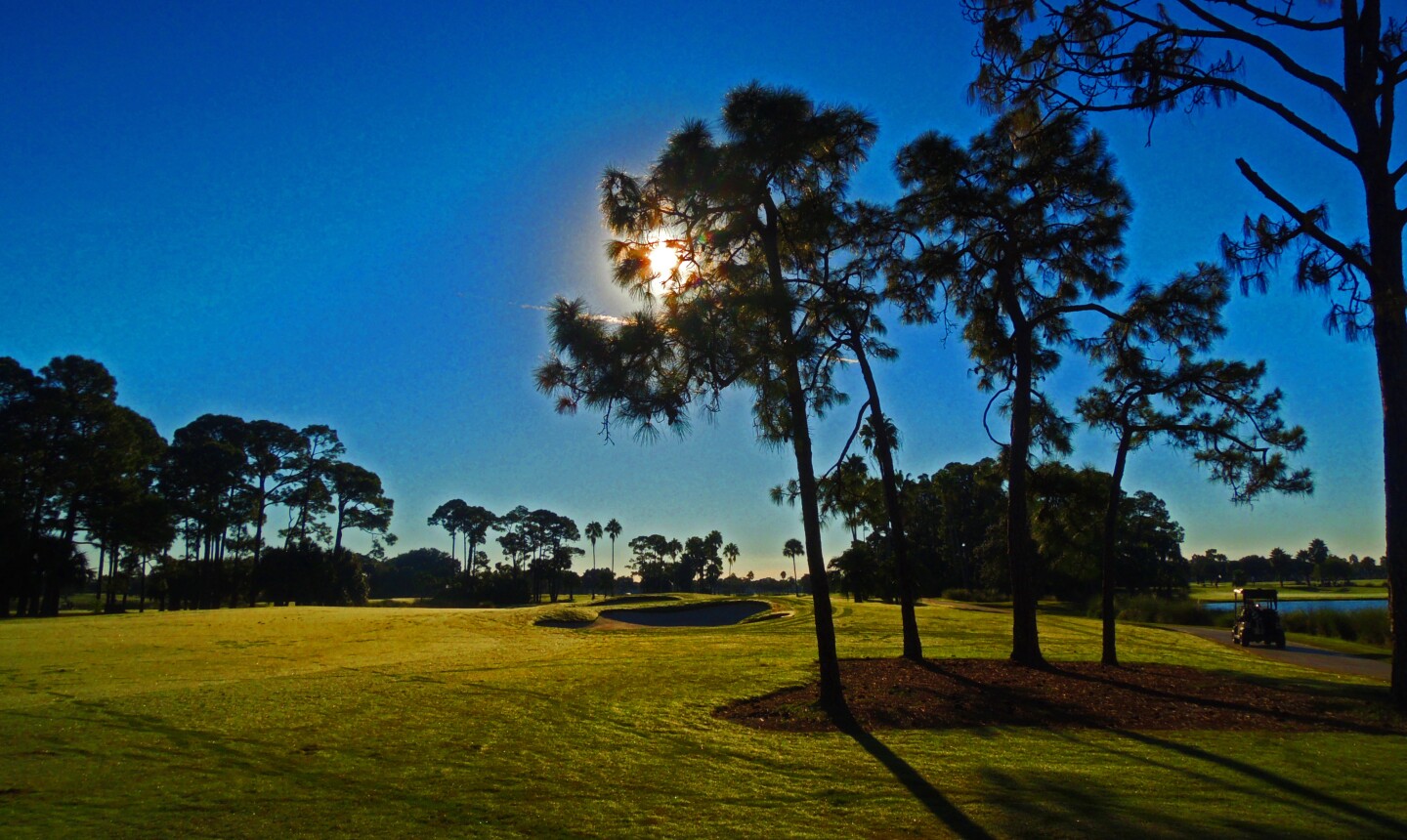 Celebration Bermuda grass is now on fairways, green surrounds and tees of The Champion Course at PGA National. Mike Bailey/GolfAdvisor

PALM BEACH GARDENS, Fla. -- New grass and a new and improved 14th hole are in store for guests and players on the Champion Course at PGA National Resort & Spa, home of the PGA Tour's Honda Classic.

The resort, which has five courses, just unveiled the changes on the course, which was closed down over the summer to install new Celebration Bermuda grass on the fairways, tees and surrounds as well as a redesigned par-4 14th hole, something architect Jack Nicklaus has been thinking about for years now.

When Nicklaus redesigned the course in 1990 (the Champion was originally designed by George and Tom Fazio when it opened in 1981), he moved the 14th green away from the water because the last four holes, and in particular, the Bear Trap holes of 15, 16 and 17, had water as their predominant elements. But in moving the green away from the water, it brought the out-of-bounds more into play.

"We could take 14 and put it semi-on the water, which is what I've done," Nicklaus said. "I think it makes a better hole. We also lengthened the hole a little bit.

He said the tour players "have a lot to talk about coming down the stretch with the Bear Trap and now you can add another hole to the Bear Trap."

From the back tees, the 14th now plays 465 yards (10 yards were added), long for the recreational golfer, but pretty standard for the PGA Tour player, who might be hitting anywhere from a 6-iron to 9-iron into the green. The new green will make the hole more challenging for the tour player, but if resort players tee off the right tees (there are five sets), they can still find the green with a short iron and even run the ball to the green through an opening between the bunkers. Best yet, the green slopes left to right, so a right pin is accessible for the recreational player without having to carry the front bunker on the right.

Additional spectator mounding was also added around the hole, and bunkers were built in front and behind the green.

The changes on 14 as well as the new Celebration Bermuda come on top of a complete bunker renovation last year. Lucas Harvey, director of agronomy, said the new grass won't be overseeded, which translates into superior conditions year-round. It also allows for firmer conditions, which should help everyday players get a little more roll of their drives.

"It's by far the most technologically advanced Bermuda grass that's out there, which allows us to produce a championship product on a day-in and day-out basis," Harvey said.

Between the 14th green and 15th tee, there's a statue of a large bear, signifying the entrance to the Bear Trap, named after the Golden Bear, Nicklaus himself. The Bear Trap is a stretch of three holes, the par-3 15th, par-4 15th and par-3 17th. All the shots to the green play over water, and when the wind is up, they are particularly difficult.

"They're very challenging holes, all of them," PGA Tour player Sergio Garcia said. "Without hitting terrible shots, you can make a double, a par and a bogey, and you leave those holes shooting 3 over and you don't feel like you hit bad shots."

While Nicklaus suggested that the Bear Trap might now begin on the 14th, he didn't think it was necessarily much harder, just more interesting.

"It produces a little more freedom and it produces a very strong par 4 going into the Bear Trap," Nicklaus said. "I honestly believe it will be more exciting, but I don’t think it will be any more difficult."

The Honda Classic has been played on the Champion Course since it moved from nearby Country Club of Mirasol in 2007. The Champ, as they call it, however has a pretty extensive history. It played host to the 1983 Ryder Cup, when Nicklaus captained the United States to victory. It was also the site of the 1987 PGA Championship and Senior PGA Championship from 1982 to 2000. It plays as a par 72 and 7,045 yards, but for the Honda Classic it's a par 70. 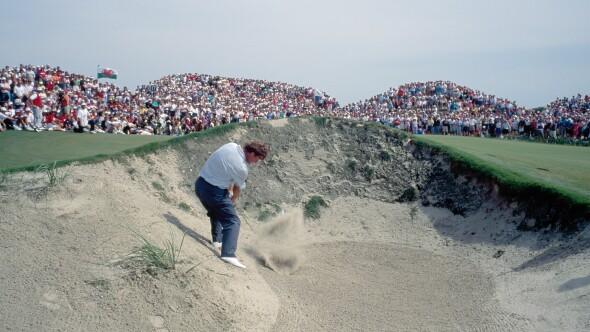 Articles
6 Min Read
U.S. Ryder Cup host courses you can play
Most Ryder Cups played in America have been played at private clubs. But there have been some exceptions. Here's a look at the five American Ryder Cup sites open to the public. 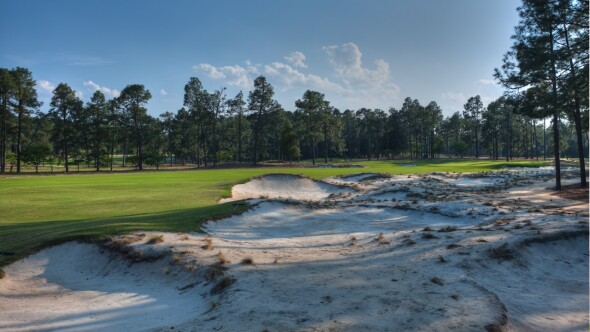 Articles
4 Min Read
Tee it up on the PGA Tour's 'Florida Swing'
The PGA Tour spends the next month in the state of Florida, and each venue is accessible to the public. Here's a breakdown of where to go.

Kira K. Dixon
Lifestyle Correspondent
Now Reading
Into the Bear Trap: PGA National's Champion Course gets makeover, new 14th hole
New Cookie Policy
WE AND OUR PARTNERS USE COOKIES ON THIS SITE TO IMPROVE OUR SERVICE, PERFORM ANALYTICS, PERSONALIZE ADVERTISING, MEASURE ADVERTISING PERFORMANCE, AND REMEMBER WEBSITE PREFERENCES. BY USING THE SITE, YOU CONSENT TO THESE COOKIES. FOR MORE INFORMATION ON COOKIES INCLUDING HOW TO MANAGE YOUR CONSENT VISIT OUR COOKIE POLICY.
CONTINUE
Search Near Me