Is this the Hottest Golf Destination in America? 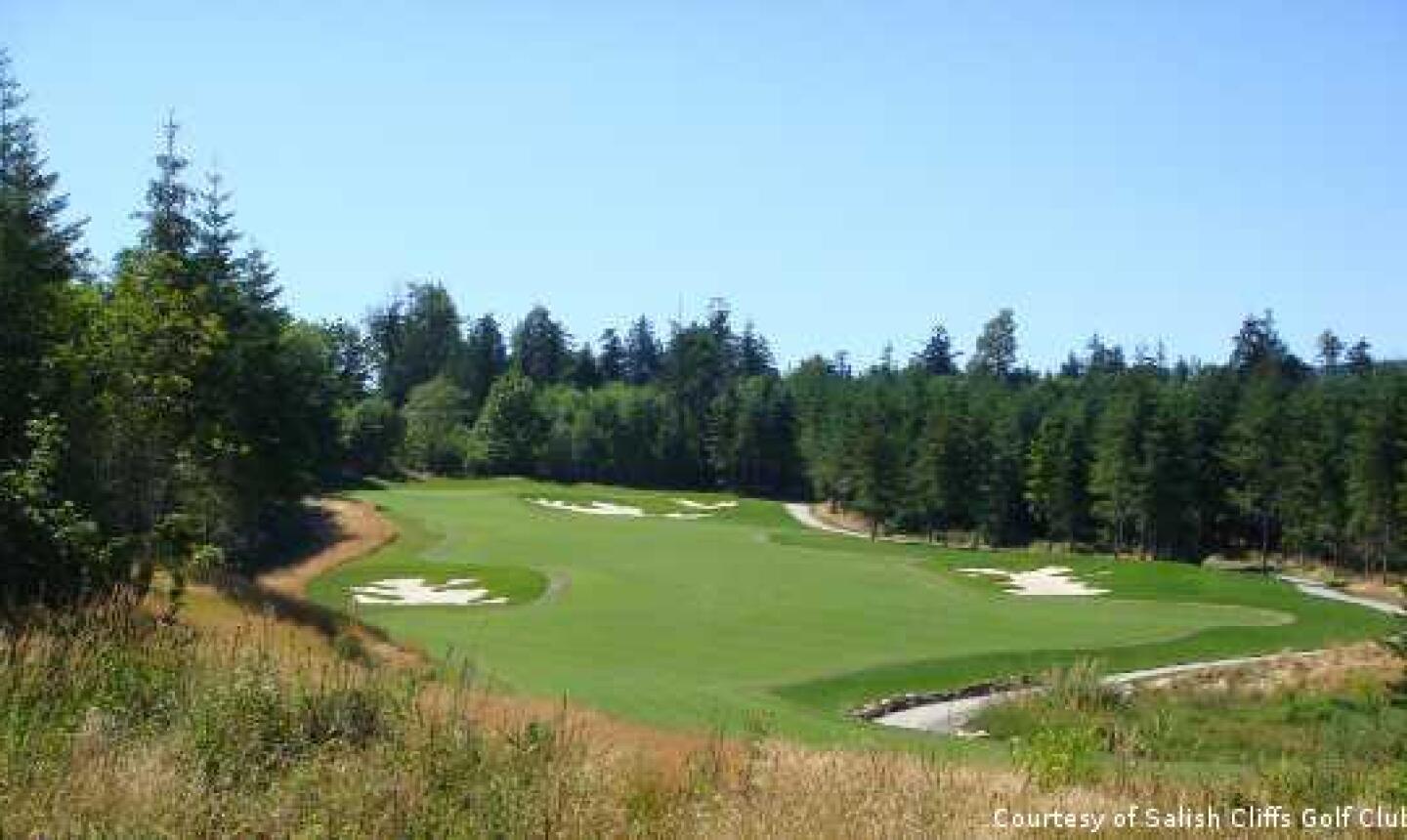 You may never have considered this region for golf vacations, but recent golf course openings are making it hard to ignore.

There aren't many brand new, high-quality, and publicly accessible golf courses opening these days, but one U.S. region seems to be cranking them out like cookies.

One course is already ranked among the nation's best public layouts. A second, also by a respected architectural team, opened earlier this month. A third opens in two weeks, and a fourth is going to be one of the most talked about courses next year.

The craziest part is, the region where all these courses are located has never really been on most peoples' short list of "golf destinations."

Amid nationwide news of course cutbacks and closures, is any other region more quickly, dramatically, and consistently improving its quality-golf quotient than the Pacific Northwest?

But it's the state of Washington that is currently making some noise, boasting two brand new courses within 80 miles of Seattle.

The first opened earlier this month at Suncadia Resort in Cle Elum. Its new Rope Rider course is an 18-hole design by Peter Jacobsen and Jim Hardy.

In two weeks, another new 18-hole layout will open: Salish Cliffs Golf Club, a Gene Bates design, at the Little Creek Resort & Casino in Shelton. If these photos are any indication it's going to be a good one...

Palouse Ridge at Washington State University opened in 2008 and was quickly recognized as one of the best university courses in country.

Making headlines just prior to that was Chambers Bay, near Tacoma, which last year hosted the U.S. Amateur and is scheduled to host the U.S. Open in 2015.

By the way, I purposely phrased my earlier line as a question, because there may be other pockets of positivity worth noting.

To that point, are there other areas of the country you feel are trending up in terms of quality golf, maybe even more than Washington state and the Pacific Northwest? Please share your comments below.

Craig Better
Craig Better is one of the founding editors of Golf Vacation Insider. In addition to traveling to 15 foreign countries, he has twice traveled across America to play golf courses in all 50 United States. Prior to joining Golf Vacation Insider, Craig was a freelance writer who contributed to GOLF Magazine, Travel + Leisure Golf, Maxim Magazine, USAToday.com, and co-authored Zagat Survey’s book, America’s Top Golf Courses.
9 Comments

Do you have any reccomendations to get the best deal at Bandon Dunes--in the next month for a Single Player? Please help! Or should I wait till next year when the new Ben Crenshaw course opens? JOE

Outstanding collection of golf courses in the Bend/Redmond, OR area. Many are very reasonable cost and close to or are part of resorts. Eagle Crest, Sunriver, Black Butte Ranch, Brasada Ranch and many others. A terrific area to visit.

Admittedly, there is some home region bias, but I've played all over the U.S. and haven't found much that compares collectively to the Pacific NW. Bandon Dunes (heaven on earth) and Chambers Bay give you a true seaside links experience. Desert Canyon and Bear Mountain in Eastern Washington have spectacular scenery on the Columbia River (Bear Mountain has some quirky/bad holes -- particularly the 1st -- but enough mesmerizing views to make up for it, in my opinion). If you're in that region and don't mind seeing some jeans and tank tops, play the Lake Chelan municipal as well. It's not a resort but has spectacular views, very fun holes, and perhaps the most deceptively difficult greens on the planet. If you prefer a walk through the woods, a fantastic course near Chambers Bay is the Olympic Course at Gold Mountatin (the original Cascade Course and nearby Trophy Lake aren't bad either). I've heard the Home Course (even closer to Chambers Bay) is superb as well. I haven't played it in years but my personal walk-though-the-woods favorite was Kayak Point 30 minutes north of Seattle. Semiahmoo another hour north is excellent as well (it was named the best new course in the country the year it opened). A couple of outstanding NW private courses that are accessible to the public if you do some digging are TPC Snoqualmie Ridge 30 minutes outside Seattle (I haven't tried this in a few years, but I assume guests at the Salish Lodge can still play it) and Victoria Golf Club in British Columbia (check with the many Vancouver Island golf course booking companies). Snoqualmie Ridge's 14th hole is worth the price of admission by itself (one of the best golf holes anywhere). Victoria is often referred to as the Pebble Beach of Canada. That is a bit of an overstatement but it is a really impressive course. I've been told that Bear Mountain in Victoria is another great course. Victoria is well worth a visit from Seattle. A beautiful English town that is easily accessible from Seattle.

Never have trouble getting a group together to play White Horse in Kingston WA, designed by Cynthia Dye McGarey of that Dye family. They recently removed some bunkers but it remains a demanding, scenic track.

I just played Salish Cliffs yesterday, they have a "soft opening" before the grand opening Sept. 16 - 18. GREAT course, in amazing condition, especially for a new course. The fairways and greens are in perfect condition. It's a much tougher course than most resort offerings, definitely deserving of major regional or national events.

Graig
Have you played Wine Valley Golf Club? This is another really great public course that opened in 2009. It is located in Walla Walla, WA and is ranked #2 on the Best Courses You Can Play in the State of Washington and just made the Top 100 Modern list by Golfweek. It is ranked above Palouse Ridge and just hosted the Northwest Open for the second year in a row. Walla Walla is also a very cool town surround by many great wineries. The course is set on open rolling terrain with dramatic bunkers and large undulating greens and is a blast to play.

Wine Valley in the SE corner of Washington, about 5 miles west of Walla Walla, is another great new Washington course - and only 3 hours from Palouse Ridge. Nice summers (as a rule), no hurricanes, no tornadoes, and lots of great golf courses? What's not to love about golf in the Pacific NW?

You're absolutely right, Dave. Thanks. Dan Hixson's 2nd solo design opened in 2009. Golfweek ranks it #2 in the state of Washington (after Chambers Bay).

Kira K. Dixon
Lifestyle Correspondent
Now Reading
Is this the Hottest Golf Destination in America?
Search Near Me