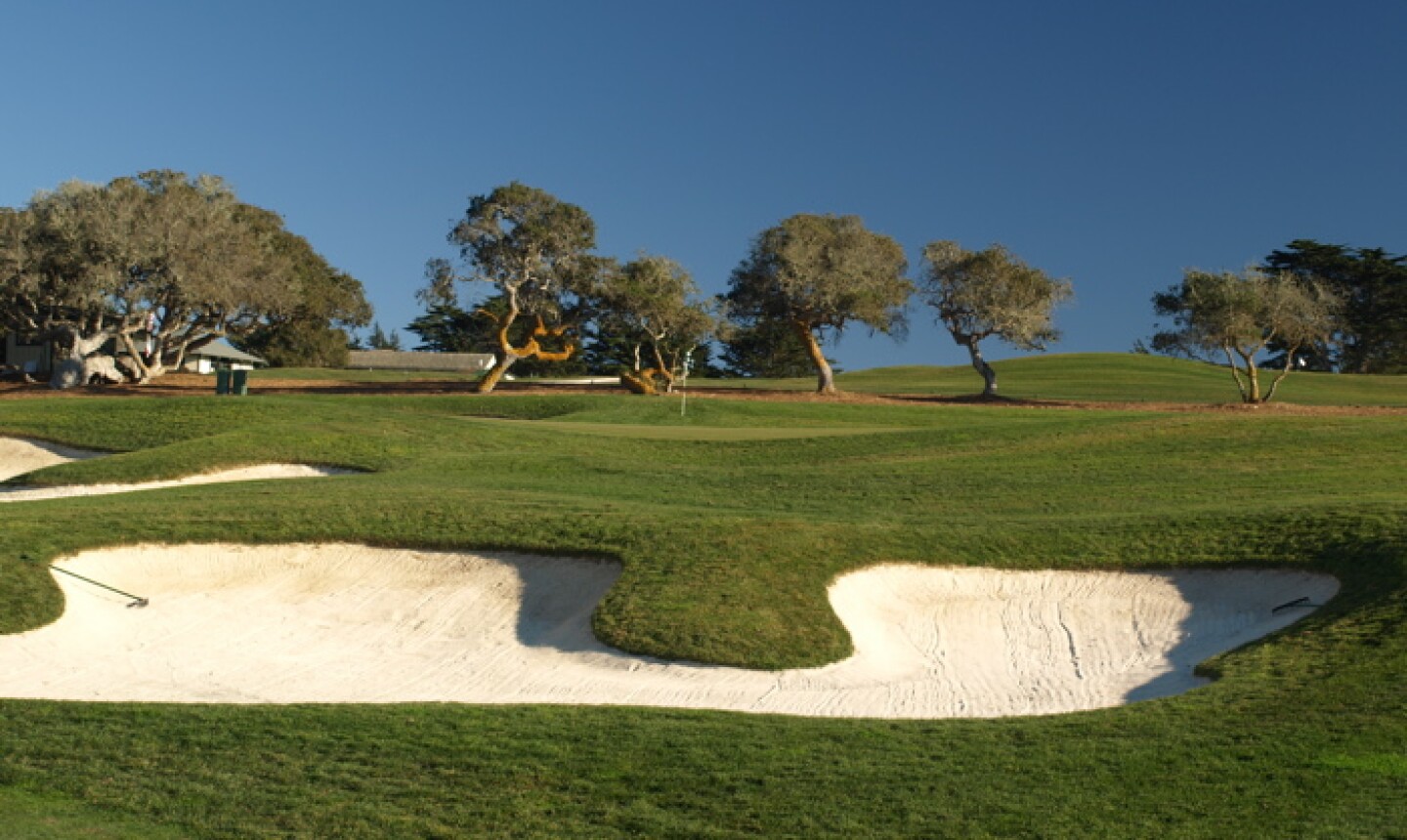 It doesn't get any harder than the ninth at Bayonet Golf Course, a 476-yard par 4 that plays almost entirely uphill. Mike Bailey/Golf Advisor

As part of the renovation, Bayonet Golf Course was reseeded tee to green with Jacklin T1 bentgrass. Courtesy of bayonetblackhorse.com 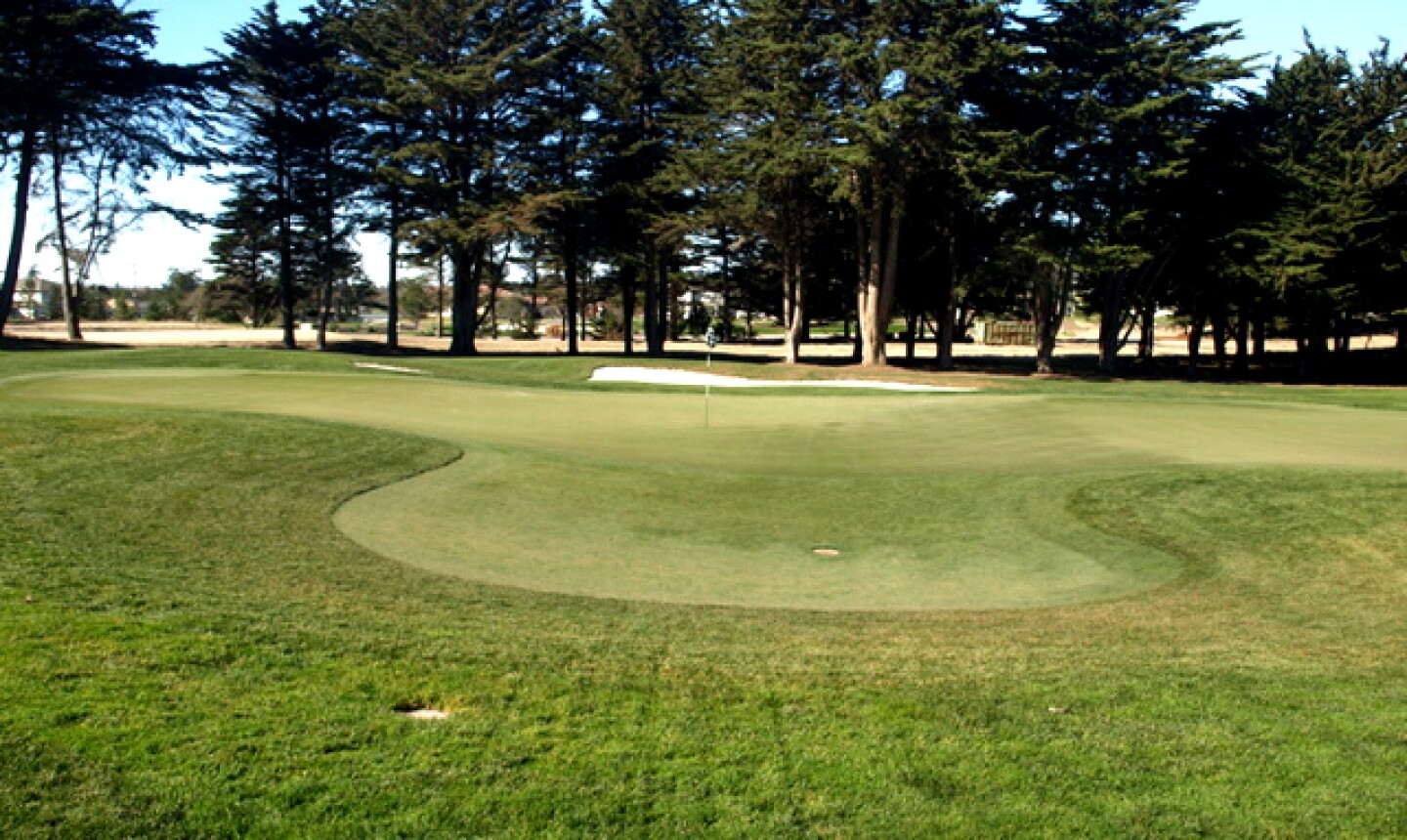 Collection areas like this one around the green on the par-5 eighth at Bayonet Golf Course can make for some challenging short-game shots. Mike Bailey/Golf Advisor

Gone are the unfair bounces, the lost balls in the trees, and the Heinz 57 variety of turfgrasses that made Bayonet Golf Course in Seaside, California, such a frustrating and difficult track.

But while golfers won't be frustrated by conditions after a recent $13 million renovation at Bayonet and its sister course, the Black Horse, the course is still plenty difficult, which is why Bayonet is ranked No. 35 on Golf Digest's list of the "50 Toughest Golf Courses in the United States." The list, which focuses on overall difficulty (slope rating, course rating and reputation), is part of the magazine's 2009-2010 edition of "The World's Greatest Golf."

While the fairways at Bayonet were reshaped and trees were thinned and cleaned up, Bates Golf Design Group added a few more wrinkles as part of the recent renovation that has the golf course playing to a slope of 141and rating of 74.8.

Now, instead of bad bounces off crowned fairways and balls lost in tree canopies that used to go to the ground, the Bates team has added deep bunkers - especially around the greens - a few more yards on some holes, and larger bentgrass greens that can present plenty of three-putts.

Play back, and Bayonet has plenty of bite

Architect Gene Bates said even though the course is more fair than it used to be, he considers it an honor to keep it on the list, which also includes the Ocean Course at Kiawah Island (ranked first on the list), Pine Valley, Winged Foot (West), Whistling Straits (Straits), Bethpage (Black), and TPC Sawgrass (Stadium).

"I think we made it more enjoyable and more playable for the average guy who uses the forward tees," Bates said. "But I believe we put some real strategic strength in the golf course for the guys who play the blue and the blacks. We located the bunkers where they needed to be for those particular players."

In other words, move to the tips of this 7,104-yard, par-72, and Bayonet Golf Course can be lethal with its fairway bunkers looming off the tee in the landing areas and long approach shots if you don't catch the "speed slots" that Bates created to reward long, accurate drives.

While Bates was only able to add about 150 yards or so in overall length, it came on a few select holes.

One such hole is the 467-yard, uphill, par-4 ninth, which might be difficult enough by itself to have landed Bayonet on the list. It's a dogleg right that plays back up the hill to a green protected in a front by a series of cascading bunkers. Even good players will have long irons or fairway woods on their approaches if they hit good drives. And if they miss the green, or worse yet, miss the tee shot, making bogey will be difficult, much less par.

"Before the renovation, Bayonet looked tough and played tough," said Dick Fitzgerald, project director for Seaside Resort Development, owners and operators of course. "Now, the course is every bit as difficult as it was, but its stunning aesthetics belie a layout that from the back tees, can challenge the best amateur and professional golfers.

"Gene's classic bunkering, the snow-white sand and deep green hue of the bentgrass combine to create one of the most visually memorable rounds of golf on the Monterey Peninsula," Fitzgerald added.

Indeed, the course now features Jacklin T-1 bentgrass tee to green, except for the striking fescue that borders the thick bentgrass rough. Before the renovation, Poa annua and Kikuyu grasses ran as they pleased throughout the fairways and greens.

Oddly enough, however, Bayonet, which was originally designed by Gen. Robert McClure in 1954, was ranked 35th on the same list before the renovation in 2007, but for different reasons. Although the corridors still remain narrow, it used to be if you hit a ball offline, there was a good chance it was lost.

"Bayonet has always had the reputation of being a player's course, and this recognition by Golf Digest validates that positioning in the marketplace," Fitzgerald said. "We are honored to be named to the list and mentioned in the same breath as many of this country's most storied golf venues."

The Bayonet as well as the other 18-hole course at the facility, Black Horse, re-opened in December after the renovation, which was spread over two years. Bates' changes not only made the course more fair while retaining its difficulty, but they also opened up the views to the Pacific Ocean, which had been lost for decades because of tree growth.

"It's like a brand new golf course that more or less follows the old routing," Bates said. 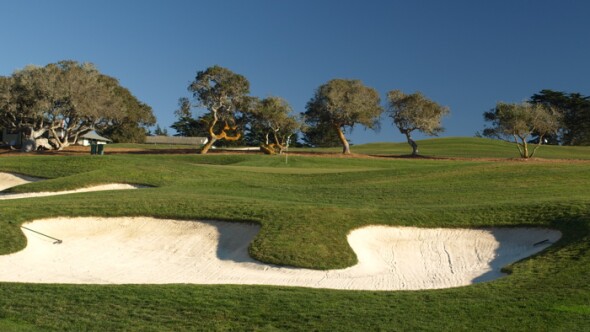