Myrtle Beach's Mystical Golf: Witch is better for you, or is it Wizard or Man O' War? 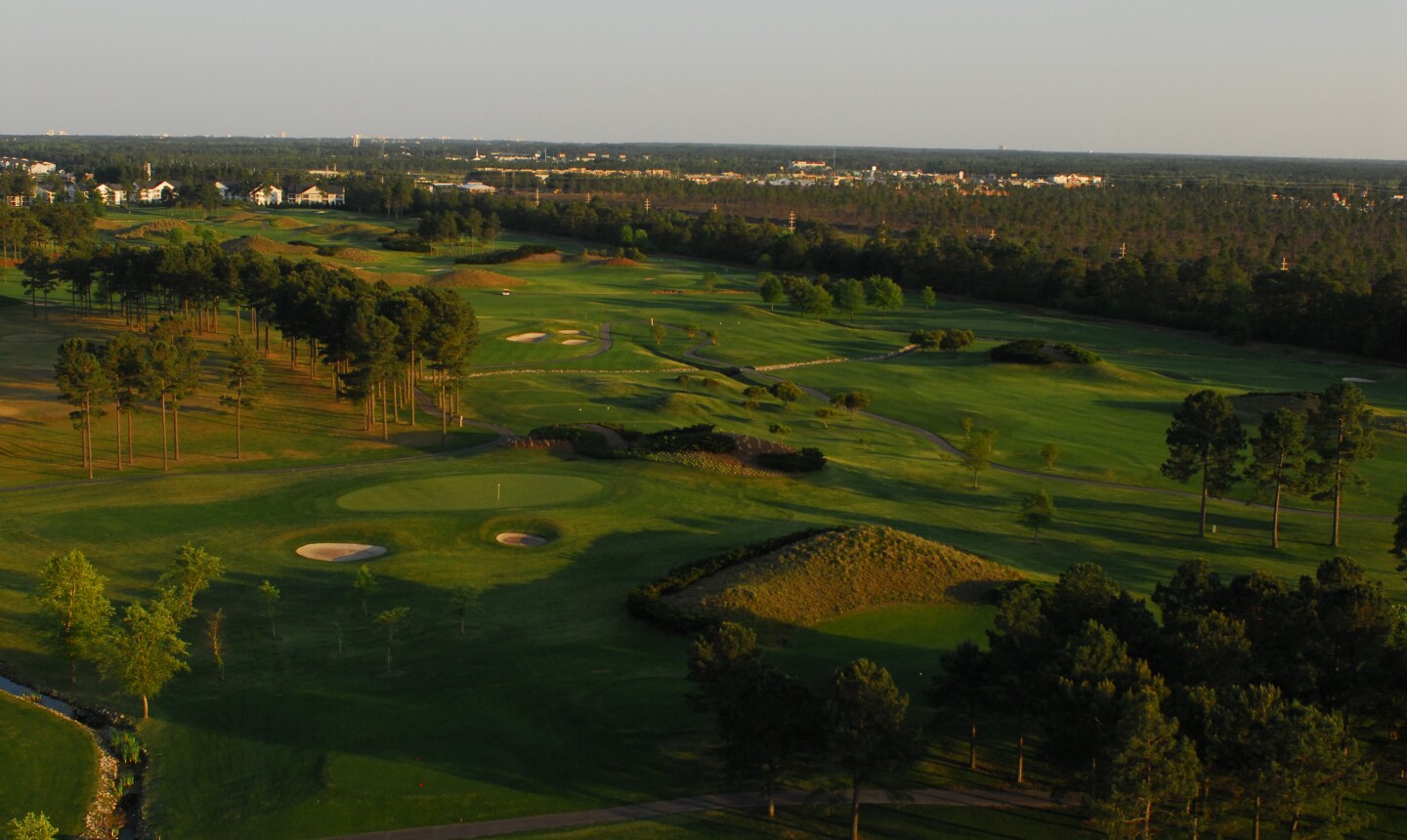 The Wizard, along with Man O' War, is one of the few courses on the Grand Strand to offer bentgrass greens. Courtesy of Mystical Golf 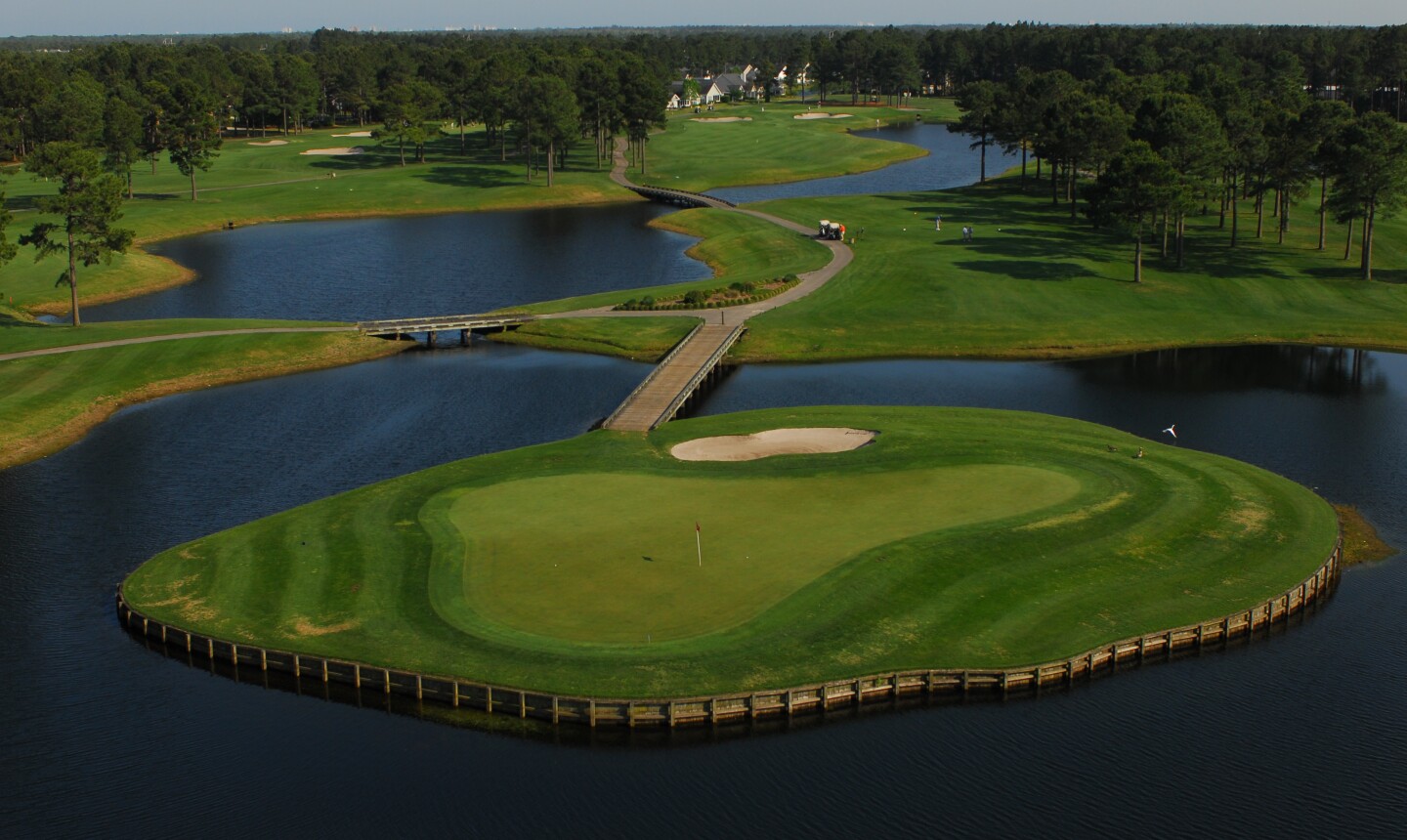 Man O' War is believed to be the only regulation golf course in the world with back-to-back island greens, on the 14th and 15th holes. Courtesy of Mystical Golf 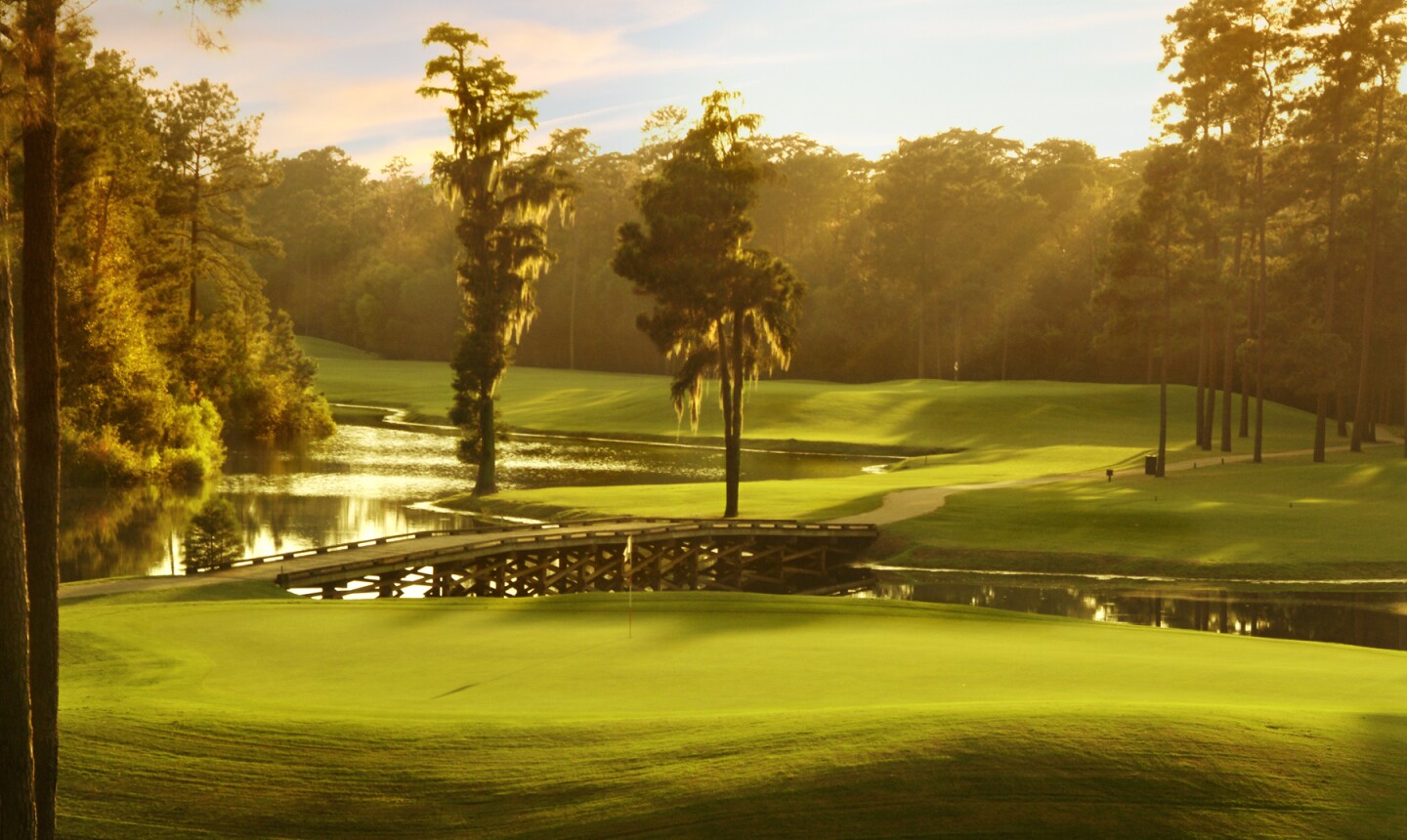 The Witch Golf Club in Conway, S.C., has a unique, mystical feel. Courtesy of Mystical Golf 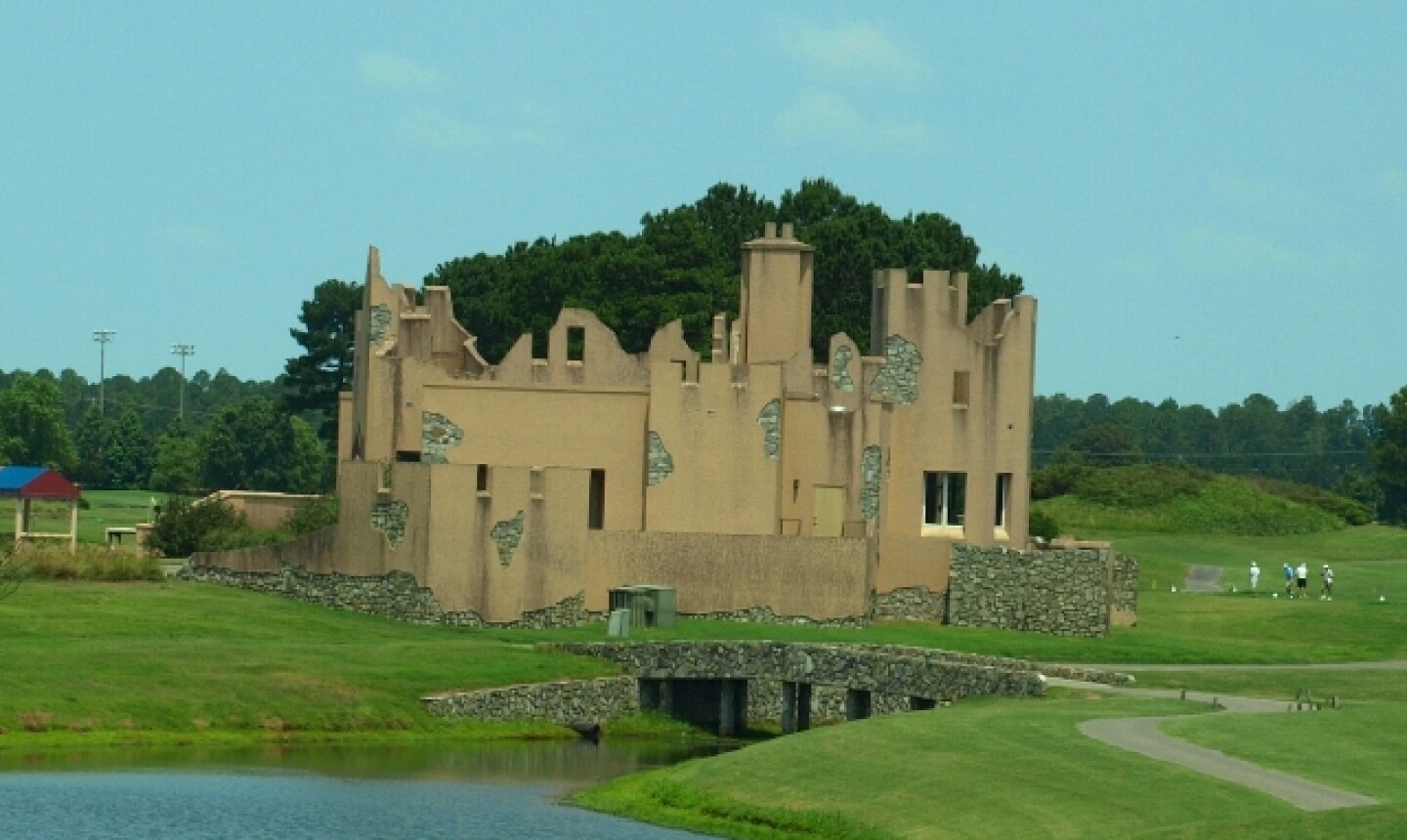 Each of the three courses of Mystical Golf has its own unique clubhouse, such as this castle at The Wizard G.C. Mike Bailey/Golf Advisor

MYRTLE BEACH, S.C. -- Mystical Golf in Myrtle Beach has three courses that rarely disappoint. But if you had to pick only one, which one would it be?

Many golfers might pick The Witch Golf Club because of its beautiful wetlands-forest combination and difficulty. Better players can appreciate its 133 slope (6,796-yard par 71). This terrific Dan Maples design, built over 500 acres, has many memorable holes, including a dynamite finishing stretch. (Maples designed all three courses.) An added bonus is that the course serves as a wildlife refuge, home to many species, including quite a few alligators.

But average golfers might prefer Man O' War Golf Club or The Wizard Golf Club, and here's why:

First off, while The Witch certainly has terrific greens, they are Bermuda (by necessity). According to Mystical Golf owner Claude Pardue, the other two courses were designed specifically to accommodate bentgrass greens. Not only are The Wizard and Man O' War two of only a handful of courses on the Grand Strand to offer bentgrass, but also they are arguably some of the best bentgrass greens in the state.

One of the obvious reasons is air circulation. Both courses, which are right next to each other but operated out of separate clubhouses, are wide open. There's plenty of water and bunkering on both courses and the trees are strategic, never suffocating any part of the golf course. There's another reason, too. The greens are not USGA spec, which was done intentionally, Pardue said.

"Each green was designed individually according to their location," Pardue said. "It doesn't matter what type of grass you have on top. If what's underneath is wrong, it doesn't matter."

Pardue said he consulted with one of the top university agronomists in the country when the courses were built back in 1996. The result has been anything but disappointing. Not only are the greens in terrific shape year-round, including Myrtle Beach's hot summers, but they're also perfect in the fall when other courses are dormant or have overseeded their Bermuda greens. Add to that the general excellent conditions on the rest of the golf courses, and you have a consistent enjoyable product.

The skinny on The Wizard and Man O' War

While both courses have much in common -- water on many holes, for example -- they are appreciably different.

The Wizard gives off a Scottish Highlands-like vibe, enhanced recently by the addition of fescue and bunkers that have been converted into pot bunkers. Running the ball up, like you get in Scotland, isn't the play on most of the holes, but it definitely has a links look on many holes, especially the opening hole, a difficult par 5 that wraps around a lake.

The finishing stretch is especially intriguing. The 16th is a difficult dogleg right around water that plays 424 yards. The 17th is a 180-yard par 3 with an island green. And the 18th, another dogleg par 4, plays into a semi-island green. The course culminates with a castle-style clubhouse.

Man O' War has a unique construction. It was actually built out of a 100-acre lake, essentially creating an island course. Yet if you didn't know it beforehand, you would never guess that was the case since there is plenty of fairway off the tee.

Of course, there's water on every hole, although it doesn't really come into play on a few of them. At nearly 7,000 yards from the championship tees, it actually rates the most difficult of the three courses with a slope of 141. When the wind is up, it's definitely the toughest of the three, but on a calm day, most would agree that The Witch is the hardest.

The par-4 14th and par-3 15th are believed to be the only back-to-back island greens in the world on a regulation course. And if they're not, the forced carries over water are many, including the ninth, another difficult par 3 that plays to a semi-island green.

As for the clubhouse -- all three are unique -- Man O' War's was built over water naturally. And inside you'll find the same good quality golf course food found at the other two, plus really friendly Southern hospitality.

If you have time, my recommendation is to play all three courses. That holds especially true for visitors who will spend several days in Myrtle Beach. There are plenty of other terrific courses on the Grand Strand, but if you can find time to play The Witch, The Wizard and Man O' War, you won't regret it.

With that in mind, packages that include all three are a terrific value as well. Mystical Golf, for example, has teamed up with the Sea Mist Resort, which is situated on Ocean Boulevard right on the beach, for golf packages.

The Sea Mist (www.seamist.com) isn't luxurious, but it's clean, comfortable, in a great location and the food is pretty good, especially if you like down-home country cooking.

There are plenty of other entertainment options in Myrtle Beach. If you like it wholesome, you might want to check out the Alabama Theatre at Barefoot Resort (www.alabama-theatre.com). For the past year, the venue, named after the popular country band, has been staging "One, The New Show," which features a variety of musical numbers from different genres. Plus, you'll enjoy the unique comedy aspect of the show.

For information on golf packages, which start at less than $500 and include accommodations and golf for three nights, visit www.mysticalgolf.com or call (843) 282-2977. 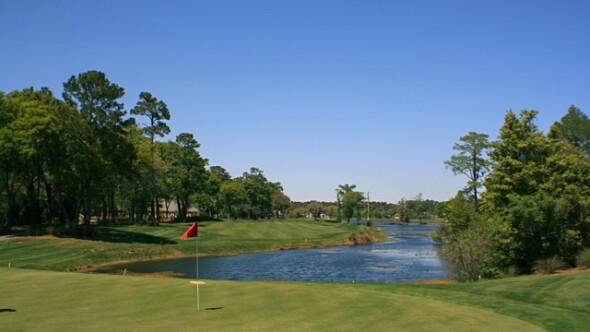 Galleries
9 Images
Dan Maples overshadows bigger name golf architects along the Grand Strand
Casual golfers might not recognize the name Dan Maples, but savvy golfers know the underrated architect belongs to a respected family in golf. Maples courses have become synonymous with playable, commonsense golf without gimmicks. Golf Digest ranks seven Dan Maples courses among its top 60 along the Grand Strand, which is more than any other architect. 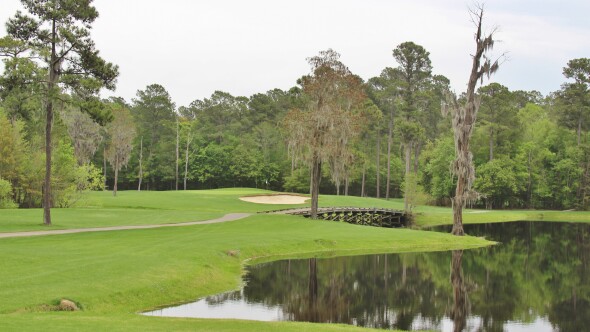 Galleries
10 Images
Let The Witch Golf Club cast its spell in Conway, S.C.
The Witch Golf Club casts its spell on golfers with a secluded, natural setting without a single home or condo in sight. Architect Dan Maples used 500 acres halfway between Myrtle Beach and Conway to craft something special. It might be priced like a middle-tier course along the Grand Strand, but The Witch looks and plays like one of the big boys.

Kira K. Dixon
Lifestyle Correspondent
Now Reading
Myrtle Beach's Mystical Golf: Witch is better for you, or is it Wizard or Man O' War?
New Cookie Policy
WE AND OUR PARTNERS USE COOKIES ON THIS SITE TO IMPROVE OUR SERVICE, PERFORM ANALYTICS, PERSONALIZE ADVERTISING, MEASURE ADVERTISING PERFORMANCE, AND REMEMBER WEBSITE PREFERENCES. BY USING THE SITE, YOU CONSENT TO THESE COOKIES. FOR MORE INFORMATION ON COOKIES INCLUDING HOW TO MANAGE YOUR CONSENT VISIT OUR COOKIE POLICY.
CONTINUE
Search Near Me