Ozarks National and the stimulation of strategic golf

There are as many different types of vacation as there are people. Spending a week on a warm beach, drink in hand appeals to many. So do whirlwind, activity-filled explorations of a city, region or whole country. There are a billion shades of structure in between.

Golf courses are like this, too. There are many layouts that treat players with kid gloves, offering little more than a few hours' outdoor diversion. Step up to the tee, take note of the challenges very conventionally laid out before you, swing away and try and keep everything straight. There's no need for much other than pure execution of shot after shot. Maybe see some wildlife, some nice landscaping, some nice views.

There are plenty of golf courses like this. Playing them is a challenge in the way trying to hit a golf ball where you want is a challenge, but not too much more. If the course was about to host a big tournament, players would describe it as "right there in front of you."

Ozarks National, the newest Bill Coore/Ben Crenshaw creation and the latest course to open at Big Cedar Lodge outside Branson, Missouri, is not one of those golf courses. As at the hundreds of Golden Age (pre-WWII) layouts that inspire them, more is required of a golfer who is intent on navigating the course successfully. The challenge on offer is as much cerebral as physical, and that can be unfamiliar and unsettling to golfers used to more cookie-cutter fare.

Coore and Crenshaw are hardly alone in this rediscovery of new-traditional golf course design. Tom Doak, Gil Hanse and many other architects are looking to the past to craft the golf courses of the future.

Along with a couple dozen Golf Advisor Getaways guests, I had a chance to play Ozarks National almost two months before its scheduled opening date of November 1. Here are two ways it, like many other newly built and redesigned courses of late, provides something beyond the ordinary.

Recent years have seen renewed insider and popular interest in golf courses where a good score requires sound strategic play. They force golfers to make choices about club selection, shot shape and direction. They tend to have wide fairways, where merely being on closely-mown turf does not entitle a golfer to an inviting look at a green. The way to play a given hole can change drastically one day to the next as hole locations and wind directions change. Powerful play can be an advantage, but brute force will not work. Missing a green on one particular side may be utterly disastrous, while missing on the other is no trouble. Firm conditions encourage and sometimes outright require indirect approaches to greens. On golf courses like this, golfers must rely on both available information - which may sometimes appear incomplete - and honest assessments of their own abilities in order to get around.

It took just two holes for this to crop up at Ozarks National. The second is a charming uphill par three, a short iron for most players. The hole was cut on the middle-right of the green, and I pulled my tee shot about 15 feet right of the hole. A good shot, right?

Wrong. My ball kicked right off the edge of the green and down into a bunker about seven feet below the surface of the green. I was fortunate to escape with a bogey. Had I missed 40 feet on the other side of the hole - a "worse" shot than the one I actually hit - I would have had a relatively gentle two-putt for a par. I failed to respect the danger on the short side of the hole and it cost me a stroke. It was far more a strategic error than one of execution.

The fifth is one of the best short par fours I have seen because of its own strategic factors. An angled fairway on the far side of a canyon winds toward an elevated green and begs the hungry golfer to bash driver and be rewarded with just a pitch to the elevated green. I opted to lay back and leave myself a full shot of about 120 yards. I managed to get the perfect angle, but by accident. I mishit the club I chose off the tee, which worked perfectly because a solid strike with that club would have put me behind a large tree that sits just through the fairway. One of my playing partners bashed a fairway wood straight at the tree on a more aggressive line but hit it too far and was stymied (see below). Once again, a "good" shot is not sufficient if it is not the proper one. Furthermore, this is the type of hole that rewards multiple rounds (and Ozarks National is well worth multiple rounds at Big Cedar). 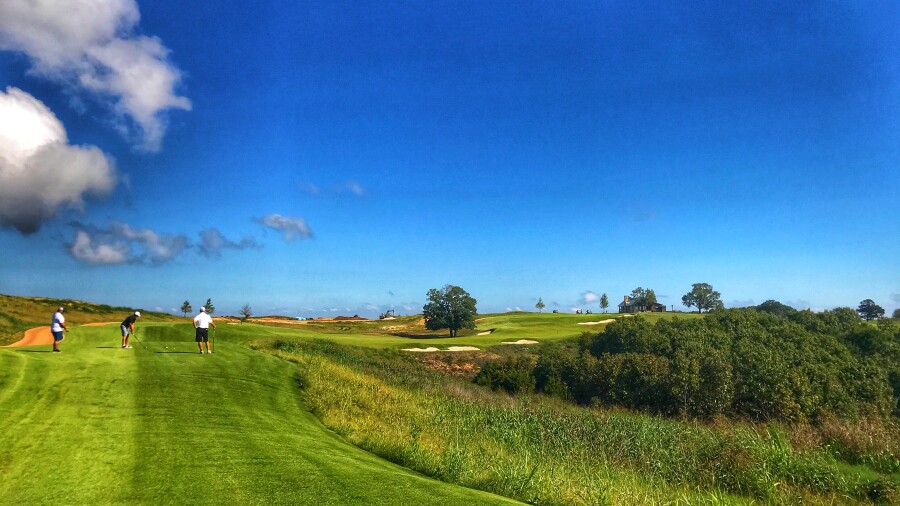 From the tee, the far tree looks more like an aiming point than a strategic concern, but... Tim Gavrich/Golf Advisor 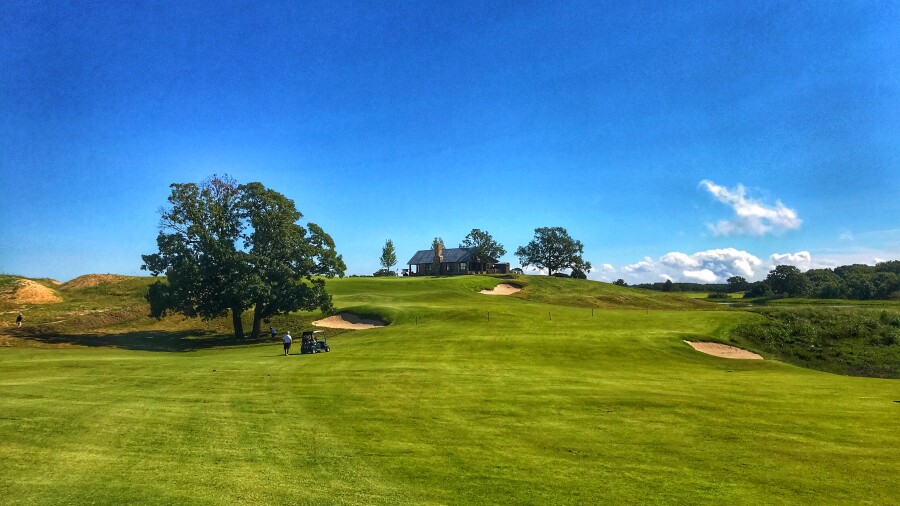 ...If you play safely left and hit your tee shot too far, it can wreak havoc with the approach, as a couple of my playing partners discovered. Tim Gavrich/Golf Advisor

A sense of flow

Remember when people would listen to albums? I still enjoy it because a well-assembled album is better than the sum of its constituent songs, because the ordering of those songs lends an interesting shape to the whole work. Excellent golf courses also unfold in a way that makes overall sense. At Ozarks National, I found the back nine to be a good three shots tougher than the front, which is a sort of imbalance that usually detracts from a course.

Here, though, I had the sense that the front, with three par threes, fours and fives each, was preparing me for the back. The sorts of visuals and challenges aren't different on the inward half so much as they are a bit more serious in scope. The chasm that the golfer must carry on the par-3 eighth foreshadows the bigger one that must be negotiated off the tee of the long par-4 13th. The short, downhill par-3 17th comes after a stretch of tough long holes and is a nice little breather before the final test: a big, uphill finishing par four. The way holes are knitted together supports the joy of the greater experience. 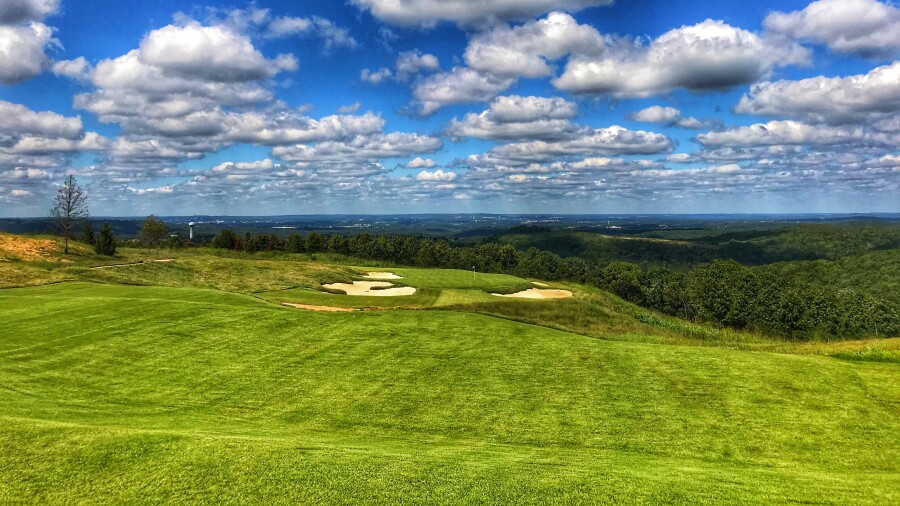 After a run of difficult long holes, the 17th is a welcome breather... Tim Gavrich/Golf Advisor 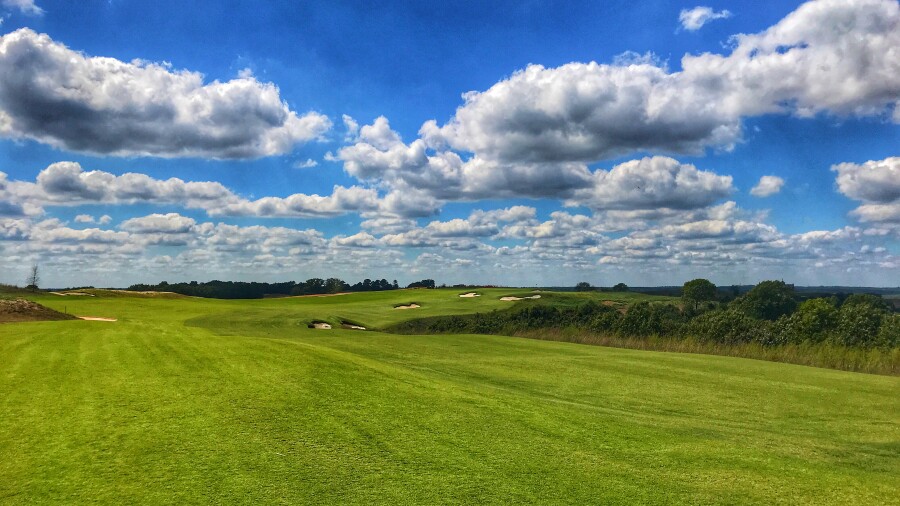 ...before the final challenge of the round: the big, uphill par-4 18th. Tim Gavrich/Golf Advisor

Furthermore, Ozarks National is walkable. The feeling of rambling over the ridgetops and the thrill of the slow-reveal views of the surrounding Ozarks splendor gives the golfer a sense of accomplishment when all's said and done. It is an adventure of a golf course.

Both these factors elevate Ozarks National beyond the level of most golf experiences. Big Cedar Lodge's overlord, Bass Pro Shops founder Johnny Morris, has a passion for enticing people into the outdoors. Mission accomplished.

Articles
1 Min Read
Taking the flagsticks out is a Cool Golf Thing
No pins? No problem.