PGA of America greenlights rangefinders at its three 2021 majors

The new ruling seems unlikely to be the first step to rangefinders at all pro tournaments.

The evolution of the pro game took a leap into the 21st century when the PGA of America announced it will allow rangefinders at its three majors this year - the PGA Championship and KitchenAid Senior PGA Championship, both in May, and the KPMG Women’s PGA Championship in June.

To purists, the use of modern technology comes at the expense of tradition at the highest level of the game. The PGA of America believes the move is simply a solution for better pace of play.

“We’re always interested in methods that may help improve the flow of play during our Championships,” said Jim Richerson, President of the PGA of America. “The use of distance-measuring devices is already common within the game and is now a part of the Rules of Golf.  Players and caddies have long used them during practice rounds to gather relevant yardages.”

Shows they are not taking slow play seriously and losing the art of people judging distances. Incredibly disappointing from the PGA of America as per usual.

Impact on the pro game

The move is actually a savvy play for the PGA of America. It brings added intrigue, eyeballs and endless social media debates to its biggest events in what continues to be an uncertain year for sports. If proven successful, the organization could be the trendsetter. Golf's other major governing bodies will be put on notice: When will the USGA or R&A follow suit, if ever?

Rangefinders have been eligible at USGA and R&A amateur championships since 2014. Some pros are ready to embrace the change. Count Will Zalatoris as a fan.

"Hopefully it speeds up the game," he said earlier this week at the Pebble Beach AT&T Pro-Am. "I know that that's been a big topic of conversation for a long time. Monday qualifiers have been doing it for a couple years now. We're able to have rangefinders. So I don't see a down side to it. I think if anything it will hopefully speed up the game, specifically of guys that hit one off line."

Others remain skeptical, like the PGA Tour brass. In 2017, the Tour experimented with distance measuring devices at three different lower levels of professional golf, including the Korn Ferry Tour, and found little evidence of improved pace of play.

"I don't think pace of play would speed up at all because we're still trying to find front numbers," Nick Taylor added as he prepared to play at Pebble Beach. "I think caddies would still be double-checking. In the case when you're way off line, of course rangefinders are going to speed up play. But yeah, that's interesting. I'm sure if you talked to caddies they would be against it because I think they take pride in what they do and it is a skill to get the angles, the numbers and be confident that you get those numbers, where the rangefinder probably takes away a part of that."

There is also the issue regarding regulation of the devices. Slope functions on rangefinders that calculate "playing" yardage versus "actual" yardage when taking into account elevation changes are illegal and would need to be monitored.

I’m excited to welcome the professional golf world to the new stress of being on the 4th hole of an event, going for the rangefinder and having the “OH CRAP DID I TURN OFF THE SLOPE!!?” freak out moment. Happens every round. Lots of fun!

Impact on the amateur game

Will seeing Tiger Woods or Rory McIlroy rely on a rangefinder on the feared Ocean course at Kiawah Island at the PGA Championship inspire golfers to buy their first rangefinder or upgrade their existing model?

"We plan on seeing a boost in sales," noted Derek Schuman, the Sr. Brand Manager at Bushnell Golf. "This decision further justifies the acceptance and reliance the best players in the world have in trusting our product to get their distances around the course."

Dan Costello, the President of CaddieMaster, a division of Troon Golf that supplies caddies for private clubs and resorts around the country, sees the rising popularity of rangefinders as having no impact on caddies who aren't in the professional ranks. CaddieMaster will continue training caddies on the art of walking off yardages, even though he estimates that 90 percent of his company’s caddies use rangefinders already anyway.

“You could have made that argument (about the death of the caddie industry) with GPS (in carts),” he said. “Not only have caddie programs not died. They have turned around and are thriving. There is zero concern on our end. Rangefinders don’t engage with the players. They don’t have personalities. They don’t tell stories. They don’t read greens.”

But can they help someone win a major?

Are you for or against rangefinders in major championship golf? Let us know why in the comments below. 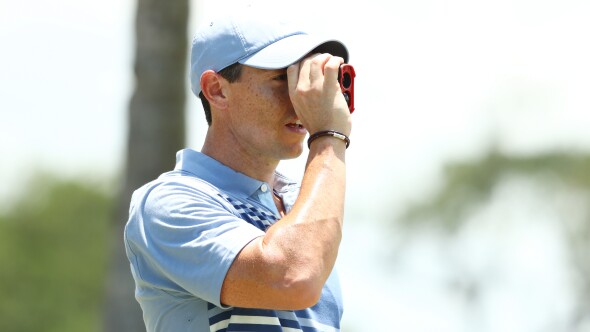 Articles
6 Min Read
Golf rangefinders: a buyer's guide
Initially dismissed as unnecessary, these gadgets are standard equipment for golfers of all stripes, from elite amateurs and pros down to casual hobbyists.

ps: And finally, competing against other professionals, they still have to deal w/the pressure and execute the shot properly, which many times they don't.

I'm a old duffer who plays golf for the fun of getting out to a nice golf park and getting exercise that way. I love carts w/gps able. I can see a time when a device shared by the pro and caddie which gives gps distances and records conversations and choices, proves to speed up the round and prints out a scorecard will be the a hot ticket item sold by garmin for big bucks.

Cloudy and shadowy conditions around greens can make relatively accurate estimates about distance to the pin difficult. Many public & muni courses have the distance marking stakes and/or boulder/shrub indicators all based on the distance to the center of the green. If all players have the option of using an electronic measuring device, it is still a 'level playing field' for all competitors, even though they have to contend with undulating fairways, water, sand hazards, wind & rain, and choosing & swinging the right club for each unique situation.

In my opinion, the PGA of America has made a unforced error in approving the use of rangefinders in major competition. First, the extra step taken by pros to use the device will add time to already slow rounds based on my observations each time I play. Second, promoting one more expensive piece of golf equipment (rangefinders) for a game that is already viewed as exclusive is just the opposite of what is needed to grow the game. Finally, rangefinders diminish the need to excel at judging distance and frankly the pros are the last players in the world that need that help. Watching the pros use the crutch of a rangefinder will not be great optics for the tour.

I have not witnessed rangefinders speeding up the pace of play, at the local, muni, and semi-private courses I play. Look, Rory and Patrick Reed just went ahead and made "embedded ball" rulings on their own, without consulting rules officials, and many rules have been softened (Bryson's gotten some favorable, but questionable rulings) in the last few years. What this, in my opinion, does is change the "These guys are good" slogan to, "these guys have it way easier than previous generations". The pro tours are getting soft for a generation that doesn't like "Grinding through the bad days".