Equipment: What to know about your golf club grips

Selecting the right grips for your golf clubs: What you should know 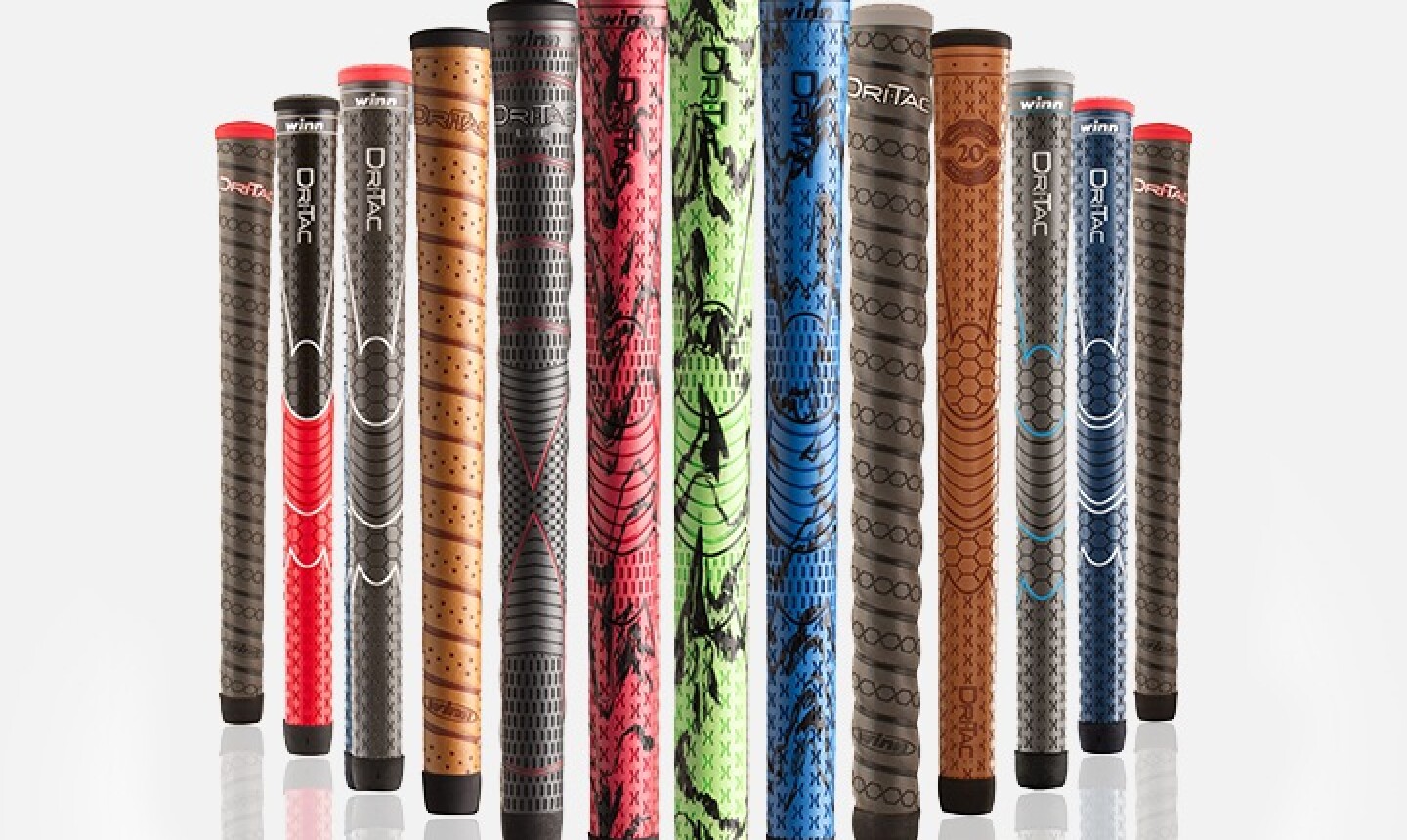 Winn's Dry-Tac grips are offered in a variety of feels and performance. Courtesy of Winn Grips 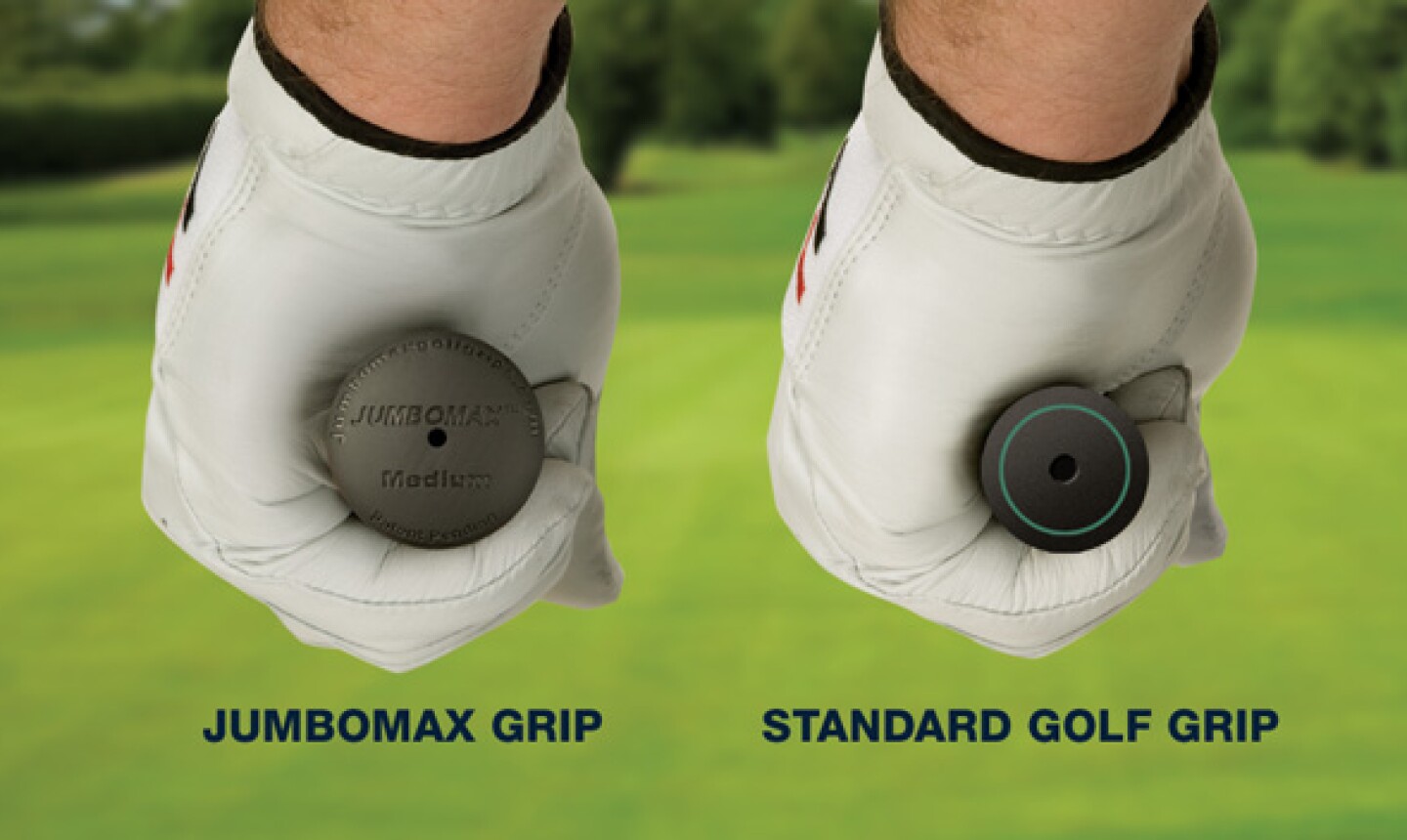 Check out the difference between JumboMax and regular sized grips. Courtesy of JumboMax 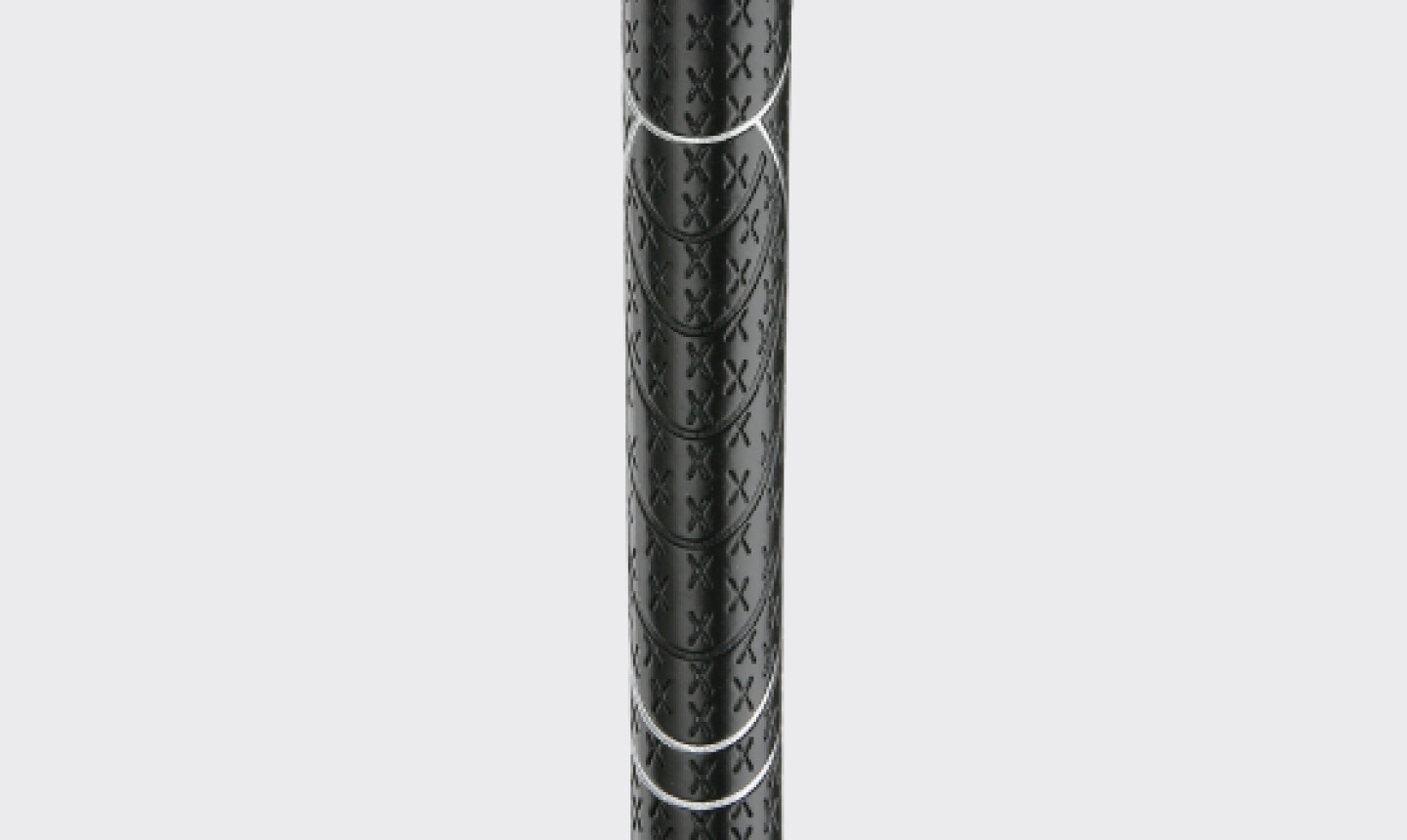 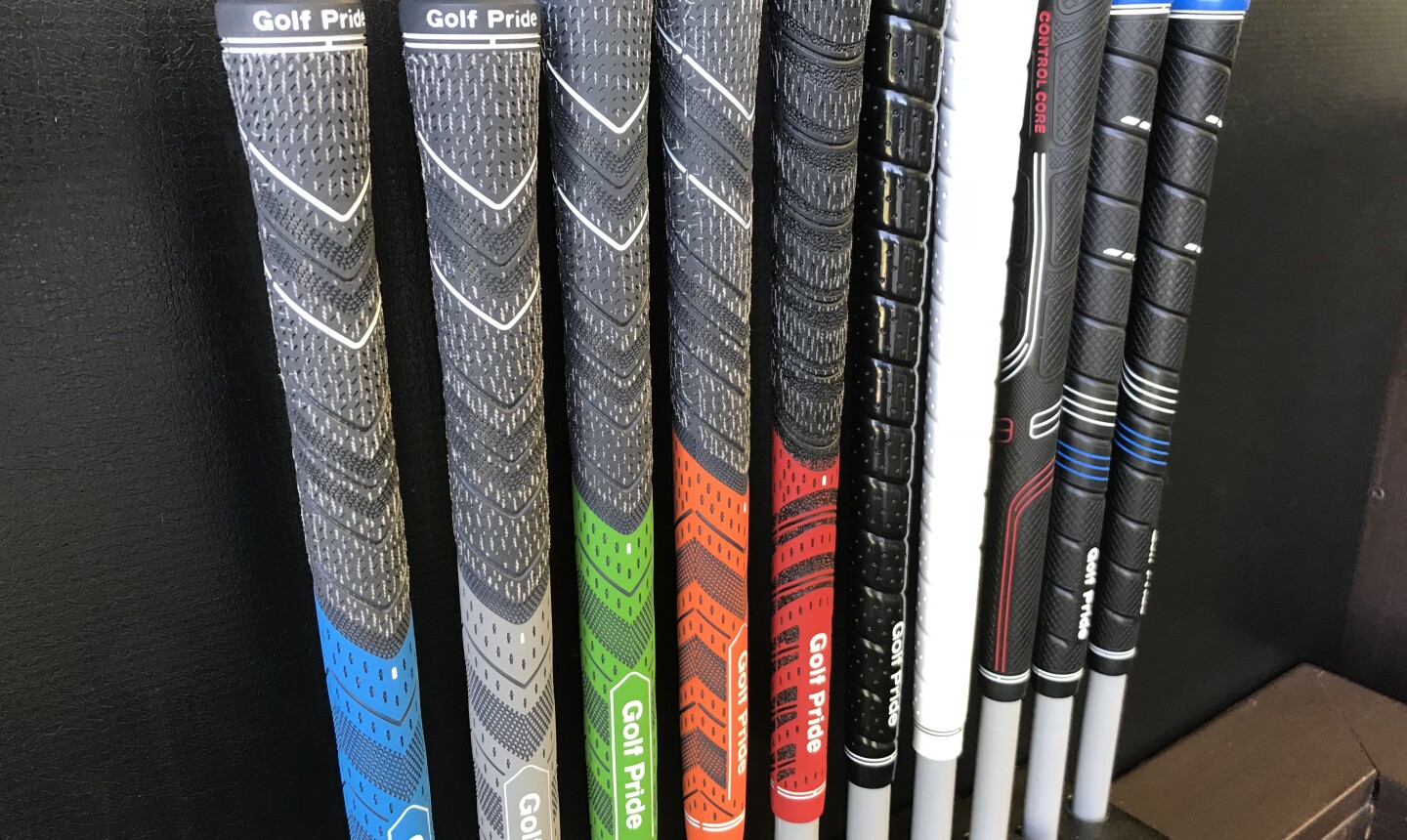 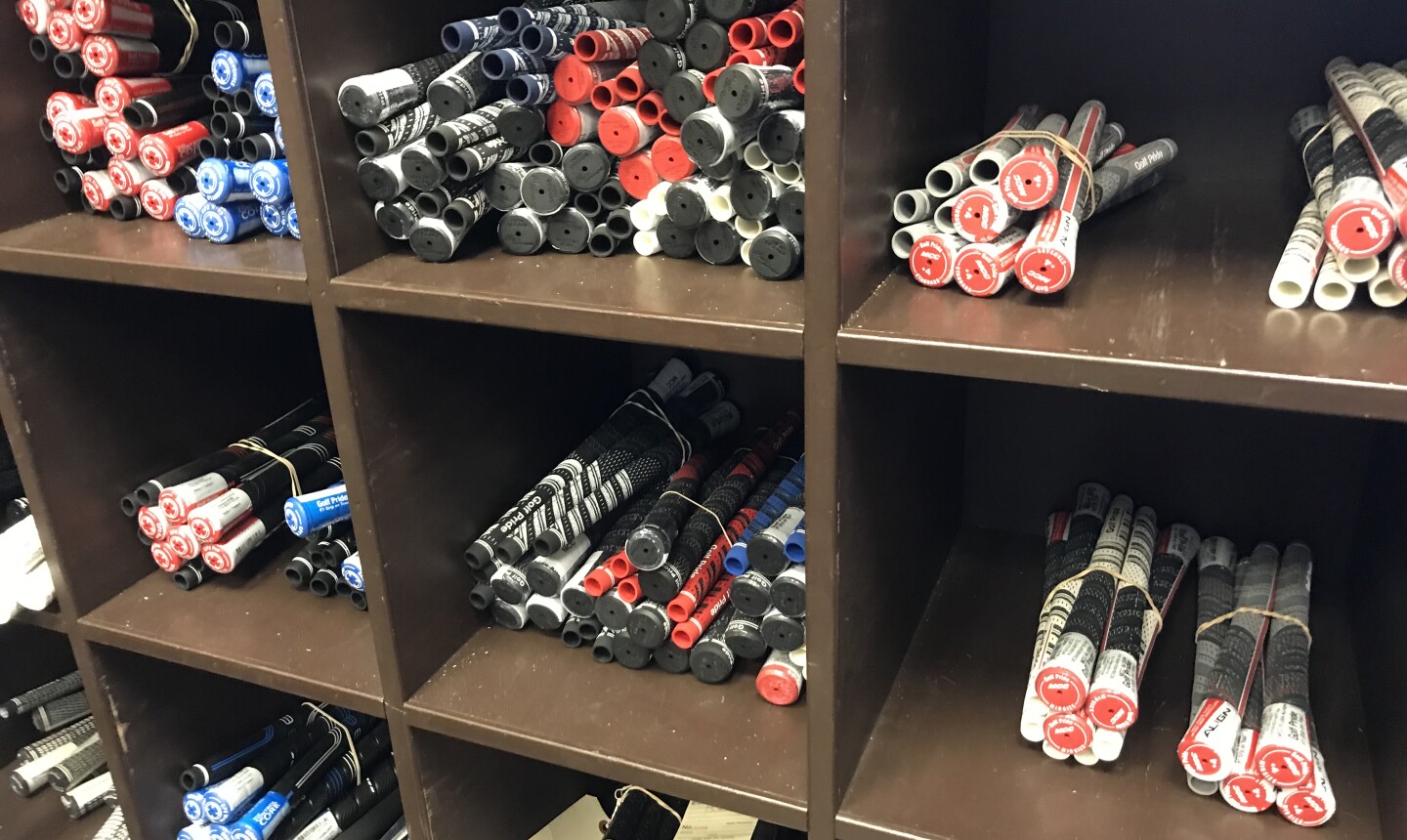 Golfers have more grip options than ever before. Mike Bailey/Golf Advisor

A clubfitting throughout the bag can often last hours, exhausting dozens of combinations of heads and shafts.

But one aspect that seems to often be an afterthought is the golf club grip. After all, it's not exactly practical for clubfitters to change out grips with the demo shafts, which come with a standard grip for the most part. Then, when it comes time to order that new set of clubs, the customer is asked, "What kind of grip do you want?"

Experienced golfers usually just go with what they've always played, or they might try out something new on the market with a little variation. And clubfitters or pros sometimes make suggestions, but this part of the fitting isn't nearly as extensive as the rest of it is.

But it doesn't mean grip selection isn't important. The grip is the actual connection to the golf club. Shouldn't it be as comfortable and stable as possible?

This not only applies to clubfitting, but to re-gripping your clubs as well. Changing to a different type of grip – and especially a different sized grip – can dramatically alter the way a club feels and performs, positively or negatively.

But how do you find the right grip for your game?

There are guidelines, but ultimately you can do what I did recently and simply experiment with different materials, firmness and sizes to see what feels and performs the best. Plus, there are some new concepts out there that challenge the old paradigms. You are, in essence, your own best grip-fitter. Here are some factors to consider:

Most high-level players use what are called performance grips. They usually have a firmer feel for more control, and there are plenty of options.

The most popular grip in the world is made by Golf Pride, but all the major grip companies – which would include Winn as well as Lamkin – offer a wide selection of grips based on firmness, grip material and surface texture.

For example, one of the Golf Pride's best sellers in recent years combines materials. The Decade grip, now known as the MCC grip, is a hybrid of rubber and cord. For golfers in warm humid climates, cord can be helpful in maintaining control of the club through perspiration and precipitation, of course.

Most recently, Golf Pride has introduced the MCC Align grip, which has a raised ridge for improved clubhead awareness, similar to the old reminder grips.

Of course, Golf Pride still offers its Tour Velvet grip as well as its longtime Tour Wraps, which have long been standards for many players of all abilities. For those who don't use a glove, the Tour Wrap is a favorite for feel, while the Tour Velvet is high on the comfort meter.

One company that has built a reputation on feel – and certainly comfort, though -- is Winn Grips. New for 2018 are the Dri-Tac, which is offered in a variety of configurations, sizes, firmness and colors. As its name would imply, the grips have a very tacky feel to them and they also tend to stay dry in humid conditions.

Lamkin has also been a popular choice for players of all abilities. In its UTX cords and wraps, you'll find a proprietary material called Advanced Cohesive Elastomer, which Lamkin says offers the highest level of surface tackiness and shock absorption. Lamkin also tends to be a little less expensive than Golf Pride and Winn, although its new high-performance TS1 is a premium grip priced at just under $10 each.

One newcomer you might want to consider, though, is SuperStroke. Known more for its extremely popular putter grips, SuperStroke has signed a number of tour players to use its performance grips over the past couple of years.

The company also has new comfort grip out, though, and it's gaining popularity among golfers. SuperStroke's Cross Comfort grips combine comfort, as the name would imply, with performance. They feature a polyurethane outer layer for comfort and a firm rubber inner layer for "great torsional performance."

But what really makes SuperStroke different is that the grips aren't tapered, meaning they don't get significantly smaller as they go down the shaft.

This is certainly a trend (Golf Pride offers a less-tapered grip in its MCC Plus 4, for example) to keep an eye on, and it certainly makes sense. I've never really understood why grips needed to be tapered in the first place. It just seems they've been doing it that way forever. Many players feel like they have a little more control over their clubface with non-tapered grips, and I would agree with that.

Rethinking the sizes of grips

And now to the most important aspect of grips – size. There has been much debate on how grip size affects performance. The old line of thinking has always been that smaller grips promote more hand action and perhaps hook, while larger grips do just the opposite. One company, in particular, does not agree with that assessment.

JumboMax, as the name implies, specializes in large grips – really large grips. These types of grips are certainly good for players who have arthritis and other hand issues, but the notion that oversized grips are only for the old and arthritic may be outdated.

JumboMax's grips are much larger than anything else on the market.

JumboMax's best-known representative is Bryson DeChambeau, who is also known for playing irons and wedges that all have the same length and bounce, the theory being, among other things, that this promotes one swing throughout the bag instead of different planes required to swing different length clubs. He also doesn't turn his wrists in his swing, so the JumboMax XL grips, which he has been playing since he was 16, certainly help in that regard.

DeChambeau is also the player who introduced JumboMax to fellow PGA Tour player Kelly Kraft, who has finished second at AT&T Pebble Beach last year, just weeks after switching to the JumboMax Junior (this is still a larger grip than any other oversized grip on the market. Since the switch, Kraft has risen to inside to Top 50 in FedEx points. He is now playing JumboMax Standard Oversize, its newest grip.

I gave these grips a whirl in several sizes and found that the Junior size worked best for me, and I still have them on my driver and 3-wood. I feel like I hit those clubs straighter than I did before.

I also had them in my irons for a while, but I struggled with the swingweight change. Because the grips are heavier, they tend to counterbalance the clubs. My irons, with graphite shafts, went to D-3 to C-1 with the change. Of course many players like the counter balance, while some feel like they can't feel the clubhead. In any event, JumboMax maintains that clubhead speed is not reduced with its grips, and that its testing shows that with many players, clubhead speed was increased.

The bottom line is that there's no right grip for everyone, of course. And the only way to know what's right for you is to try out a variety of grips. You'll be amazed at how differently your clubs will feel and perform, for you, with different grips.

But most importantly, change your grips frequently. I've always felt like getting new grips made me feel like I had a new set of clubs.

Mike Bailey
Mike Bailey is a senior staff writer based in Houston. Focusing primarily on golf in the United States, Canada, the Caribbean and Latin America with an occasional trip to Europe and beyond, he contributes course reviews, travel stories and features as well as the occasional equipment review. An award-winning writer and past president of Texas Golf Writers Association, he has more than 25 years in the golf industry. Before accepting his current position in 2008, he was on staff at PGA Magazine, The Golfweek Group and AvidGolfer Magazine. Follow Mike on Twitter at @MikeBaileyGA and Instagram at @MikeStefanBailey.
8 Comments

Need confirmation in respect of "non-conforming" grips.
A putter grip (with a flat front area) is / is not a non-conforming grip if fitted to any other club other than a putter. For example a "chipper" of a driver for that matter.

How can I tell if using a bigger grip is going to help? I'm using standard grips currently.

I am 80. In good health, have arthritis in both of my hands and cannot make a complete closed fist with both fists. Would like to try jumbo grips.

Speaking of comfort, I have played Lamkin Crossline grips for many years and always liked the sense of adhesion and control they give, especially in colder weather, when other "tacky" grips lose their tackiness.

However, since I retired, I'm playing more often, about 5 times a week. It seems the Crossline grips are harder on the hands, as I am having skin abrasions, even to the point that the skin on the extremity of my right thumb (I play left-handed) will crack and start bleeding. I have always played without a glove, but I now have to wear two gloves from time to time to let my hands heal.

Has anyone else noticed skin abrasion with Crossline grips? I have tried Winn Dritac grips for one season, but they are really bad in colder weather. I would appreciate suggestions.

Nothing against Golf Pride, which I have played for 25 years, but I really like the Cross Comfort grips from SuperStroke and would recommend you try them.

Tim Gavrich
Senior Writer
Now Reading
Selecting the right grips for your golf clubs: What you should know
Search Near Me