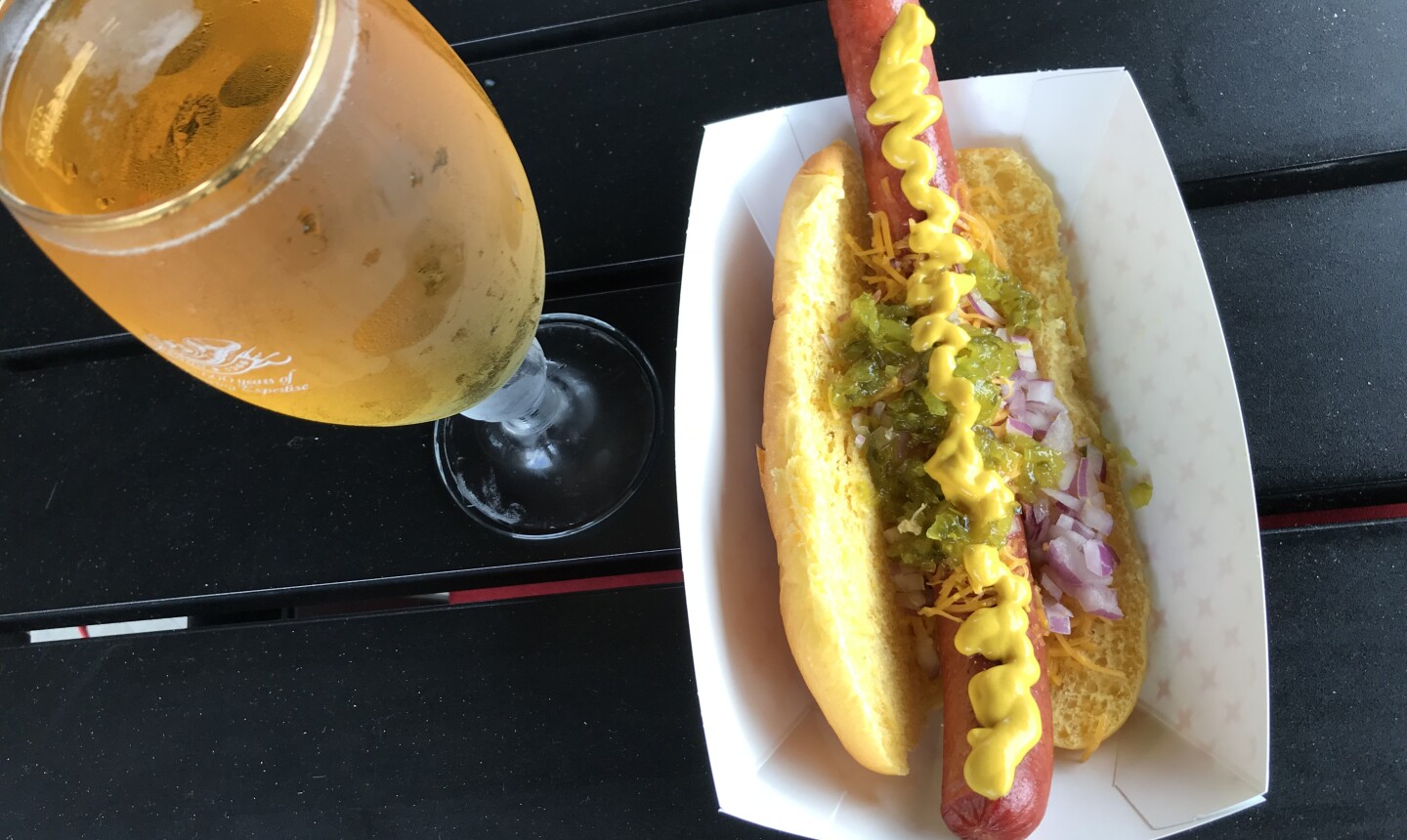 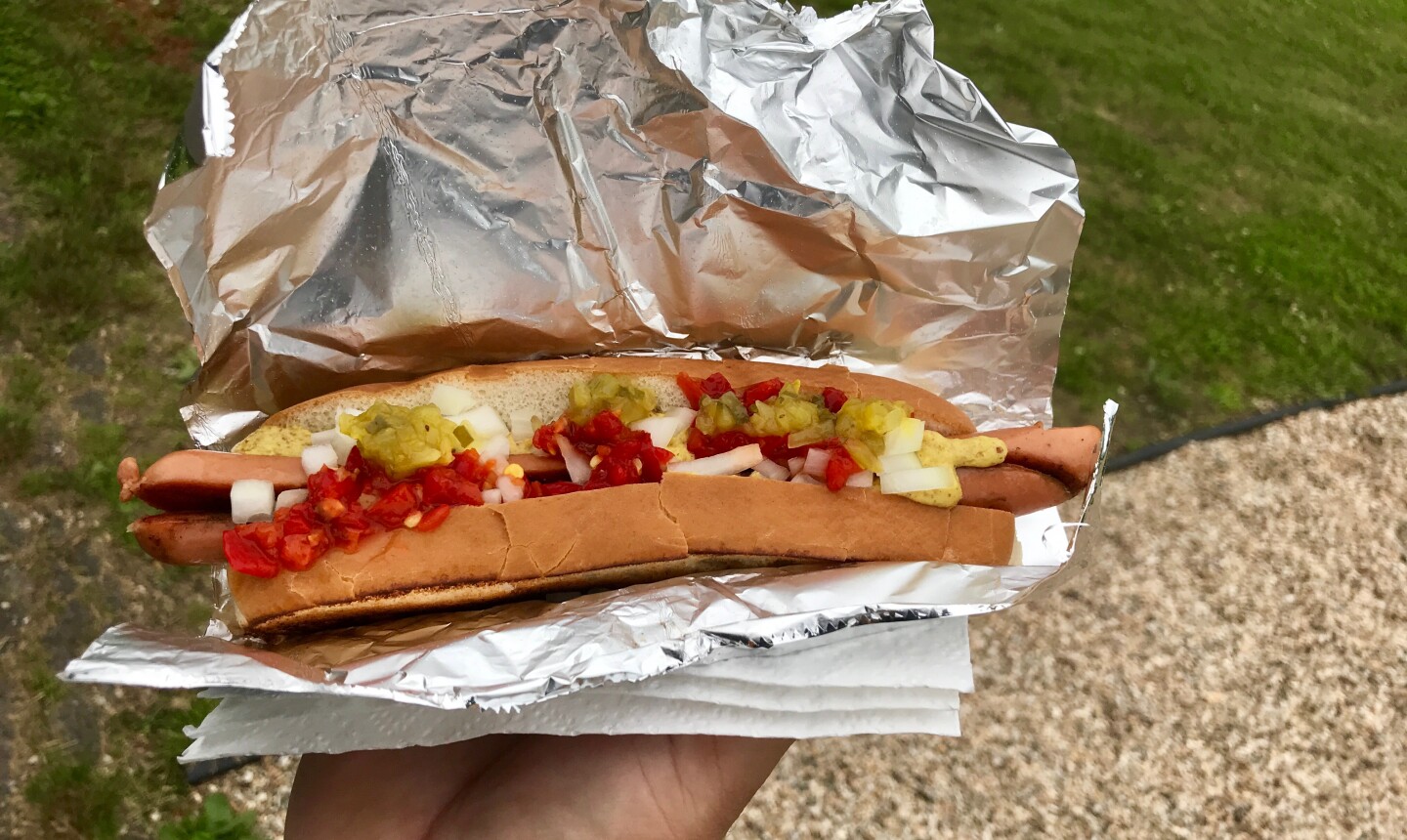 According to Tim Gavrich, the hot dog at Crestbrook Park in Connecticut is pretty much heaven on earth. Tim Gavrich/Golf Advisor 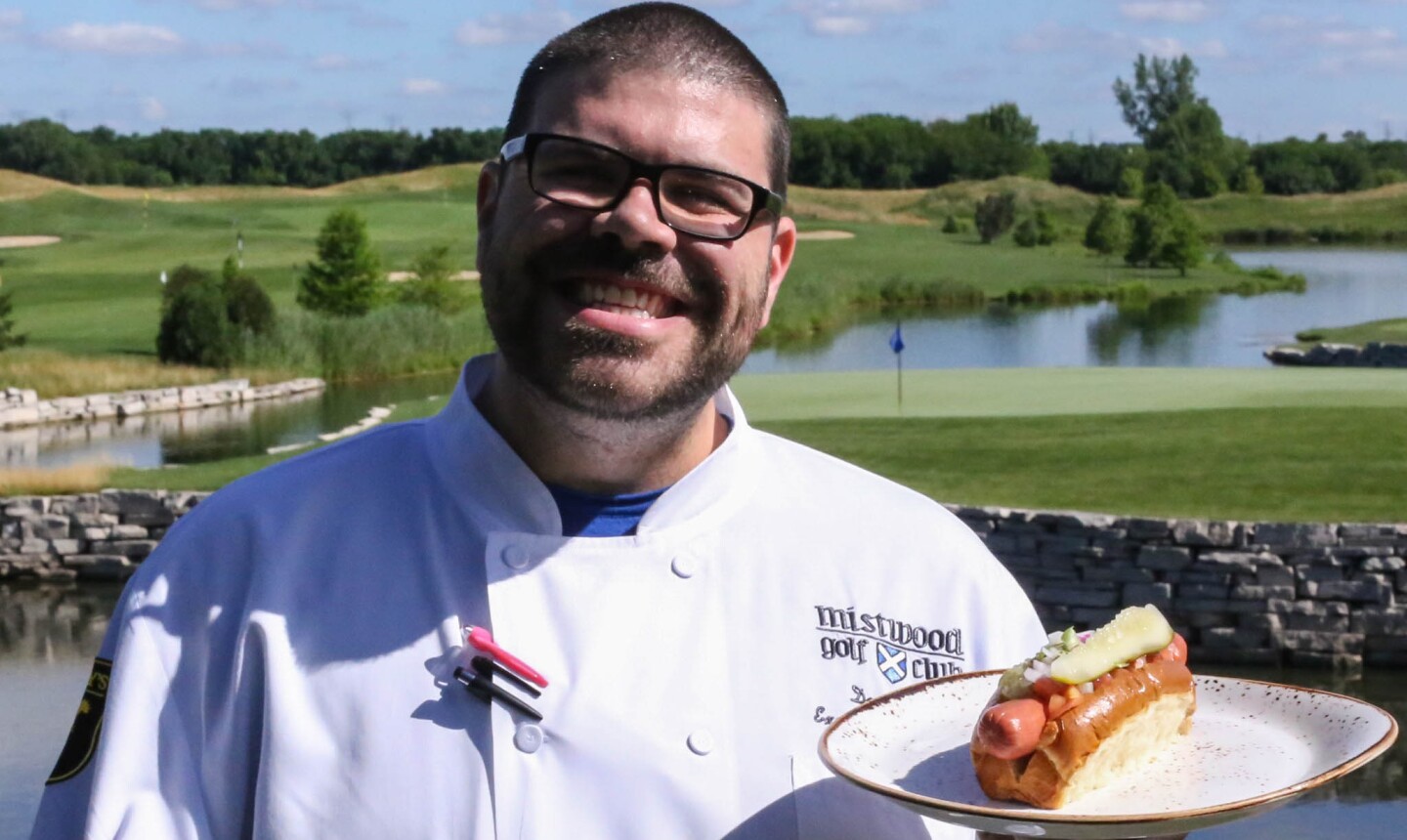 Although some called them frankfurters, in reference to their German sausage roots, there are few things more American than the hot dog.

Most of us really aren't even sure what's in a hot dog, which is probably a good thing. What I am sure of is that when they’re made right, have the right toppings, and they are truly hot (temperature-wise, at least), they are pretty much the perfect food at the turn at any golf course.

A good hot dog generally goes down in just a few bites, and if you've mastered the technique of putting on the right condiments on in just the right amount, they need not be messy. Of course, some of them are. A chili dog out of hand can ruin a white golf shirt, so be careful.

My favorite kind of hot dog, hands-down, is the Chicago Dog. While you can get these in most parts of the country, the best place to find them, of course, is in the Windy City. An authentic Chicago Dog is made with Vienna Beef hot dogs (the company is celebrating its 125th year) and comes with bright green relish, chopped white onions, a dill pickle spear, tomato slices or wedges, pickled sport peppers, yellow mustard and a dash of celery salt. And yes, I do realize I've contradicted myself if I list the complicated Chicago Dog as a perfect golf course food, but they're just so darn good. Since a true Chicago Dog is probably too messy, therefore I usually go for a slightly dressed-down version on the golf course.

At Cog Hill Golf Clubl in Lemont, Ill., you can get exactly that in what is known as the Cog Dog. With four courses on property, the club sells tons of Cog Dogs. They go well with local craft beers as well.

Just down the road near Joliet, the folks at Mistwood Golf Club are even more ambitious with their dog-making this year. Mistwood, which has one of the best food and beverage departments of any daily fee I've ever visited, is planning to set a world record for hot dogs on the Fourth of July during their a hyper-patriotic "Stars & Stripes" tournament. They're going to line up more than 1,200 hot dogs in an effort to break the Guinness Book of World Records mark of the longest continuous line of cooked hot dogs, which stands at 1,157 feet (held by Nakakyushu Kubota of Japan).

"There are few things more American than the hot dog," said Jim Koklas, food and beverage director at Mistwood Golf Club. "And we decided it is time to bring this record home. As a nation founded on ingenuity and industriousness, we're also very good at lining things up. On behalf of all Americans we are going to reclaim this title on July 4th, guaranteed."

So if you've got nothing better to do and are in the Chicago area on July 4, head over to Mistwood GC by 2 p.m. to witness the attempt and maybe get a free hot dog or two. I think they're going to need some help eating them.

A hot dog for everyone

While Vienna Hot Dogs are the way to go in Chicago, the hot dog can take on all kinds of looks and tastes in other parts of the country. In the south (especially Texas), they love to put jalapenos on their dogs. In the northeast, it might be Nathan's or Hebrew National, perfect with a great variety of condiments and toppings. (This is where I need to mention that ketchup cannot be one of the toppings unless you're under 12 years of age.)

My colleague Tim Gavrich, who is probably the best stick on the Golf Advisor staff, has his favorite, and he goes to great lengths to describe it.

"Having grown up in Connecticut, home to some of America's best hot dogs (Capitol Lunch in New Britain, a town known for its Polish population, is sublime), I like to think of myself as a bit of a connoisseur," Gavrich said. "On a recent trip to the state of my birth, I played Crestbrook Park Golf Course, a nice-enough muni in the town of Watertown. In a state with a lot of excellent public-course dogs, this was frankly the best I’ve had: oversized, laid in a top-split and lightly toasted bun and of local provenance. In addition to the normal condiments - including raw onions and sauerkraut - there were two relishes: the normal green one and a slightly spicy red one, which complimented the mustard perfectly. All for $3."

A fine course I played yesterday, in fact, sells a pretty fair wiener as well. Down in Waterloo, Ill., just outside of St. Louis, Annbriar Golf Club does a foot-long dog from nearby Wenneman's Meat Market. They pair it with a fresh, buttery bun from nearby Anhe's Bakery. It might be the most popular lunch item on the menu.

Of course, not all hot dogs are technically hot dogs, but we're going to talk about them anyway.

In Wisconsin, for example, the choice should probably be a Johnsonville bratwurst over a regular dog. After all, that's what they do really well (in addition to beer, of course). I had more than one of these when I played the courses at Destination Kohler, including one at the Irish pub in the Whistling Straits clubhouse. My choice of toppings was simple: stoneground mustard (you don't do yellow mustard with a brat), and sauerkraut.

And on the west coast, you'll find one of the most famous non-wiener hot dogs of all time: the burger dog. You can get these at a couple golf courses, most notably, the Olympic Club, which has been the site of five U.S. Opens. You'll also find them at Silverado Golf Resort, just up the road in the Napa Valley.

Hungry? How about a famous #burgerdog at #SilveradoResort in #Napa #Cali Home of the #SafewayOpen

It's basically a hamburger shaped sort of like a hot dog, served in a hot dog bun. It's actually been around since Hot Dog Bill's, a small, family-owned business owned by Bill and Billie Parrish, started serving them in 1950 in a mobile hamburger trailer in the San Francisco Bay Area. They often stationed their trailer at Lake Merced close to the Lake Course at Olympic, and soon caddies began crossing the flume to purchase food for the members. Due to the Burger Dog's popularity, they were invited to move their trailer permanently onto the Olympic Club’s property, and the rest has been history.

So many golf courses, so many weenies. We're always looking for recommendations, so tell us about your favorite golf course hot dogs with us in the comment section below!

Mike Bailey
Mike Bailey is a senior staff writer based in Houston. Focusing primarily on golf in the United States, Canada, the Caribbean and Latin America with an occasional trip to Europe and beyond, he contributes course reviews, travel stories and features as well as the occasional equipment review. An award-winning writer and past president of Texas Golf Writers Association, he has more than 25 years in the golf industry. Before accepting his current position in 2008, he was on staff at PGA Magazine, The Golfweek Group and AvidGolfer Magazine. Follow Mike on Twitter at @MikeBaileyGA and Instagram at @MikeStefanBailey.
71 Comments

I would promote on all social media a veggie hotdog!!! NOBODY ever has food for vegetarians. I play a lot of golf and there is rarely anything to eat at the turn other than pretzels. Someboday PLEASE step up their game and help the humans, animals and environment with this simple request! Thanks so much for considering! Namaste ~ MJ

Farmstead Golf Club in Lafayette, NJ for me.

Just down the hill from Winged Foot Golf Club in Mamaroneck, NY, and less than a mile to Mamaroneck High School is Walter's, Purveyor of the Best Hot Dogs in the U.S.A.!

Put the red relish on your hot dog at the Golden Horseshoe Golf Club in Williamsburg, Va. Enough eaid

Rochester NY is the home of the White Hot, aka pork hot. . Many golf courses sell them at the turn. Speciality restaurants on the lake in and around Rochester feature hots. The toppings are various. Grocery stores sell them also but they are hard to find outside of a fifty mile radius. Some ex Rochester residents import them in at a high cost. They are that good.

I sure do love a good zweigles !

Too often, the most memorable part of my round At Olympic Club is the burger dog! Simply the best!