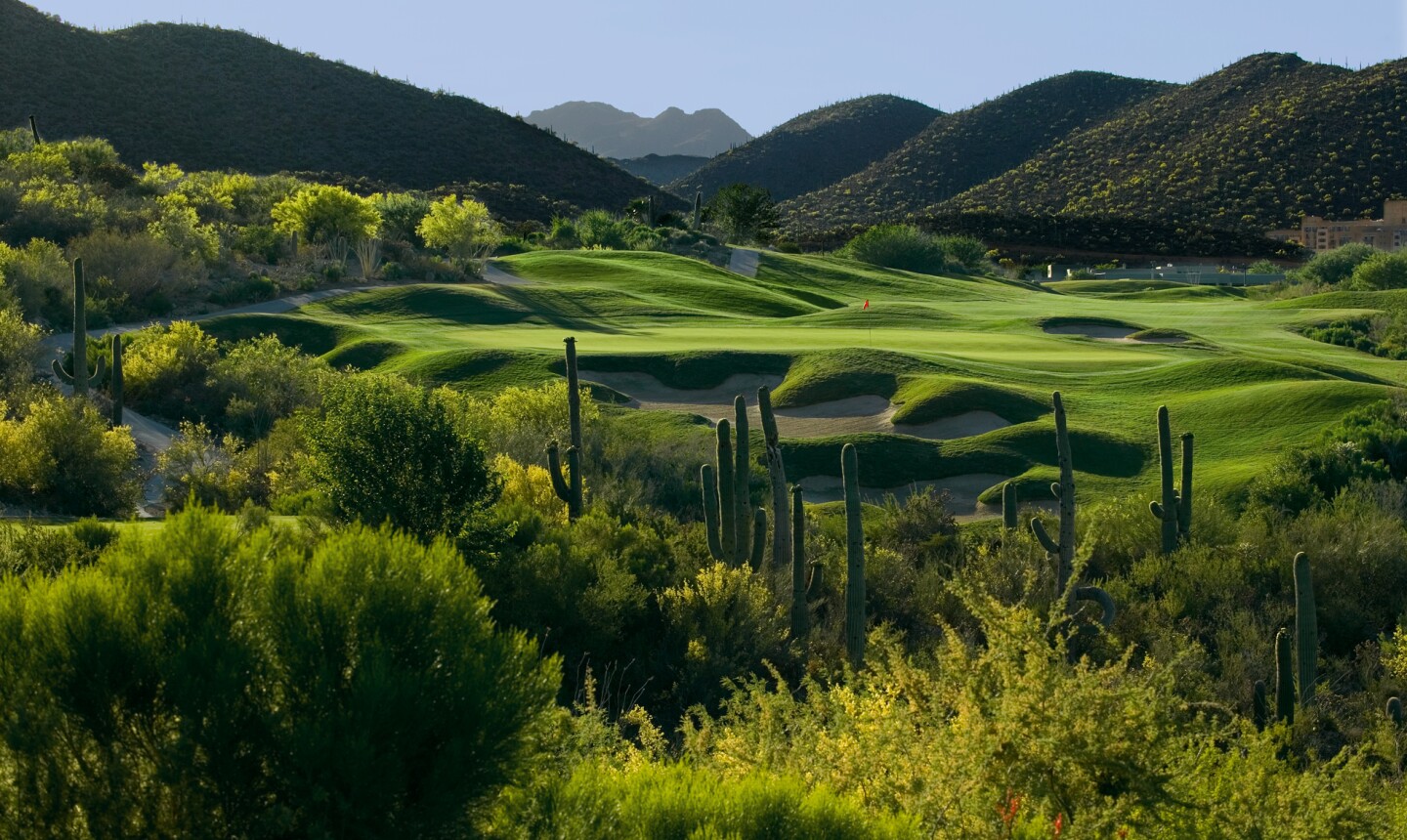 Most first-time players are pleasantly surprised that Starr Pass Tucson is so much in the mountains, Director of Golf Todd Howard said. Courtesy of jwmarriottstarrpass.com 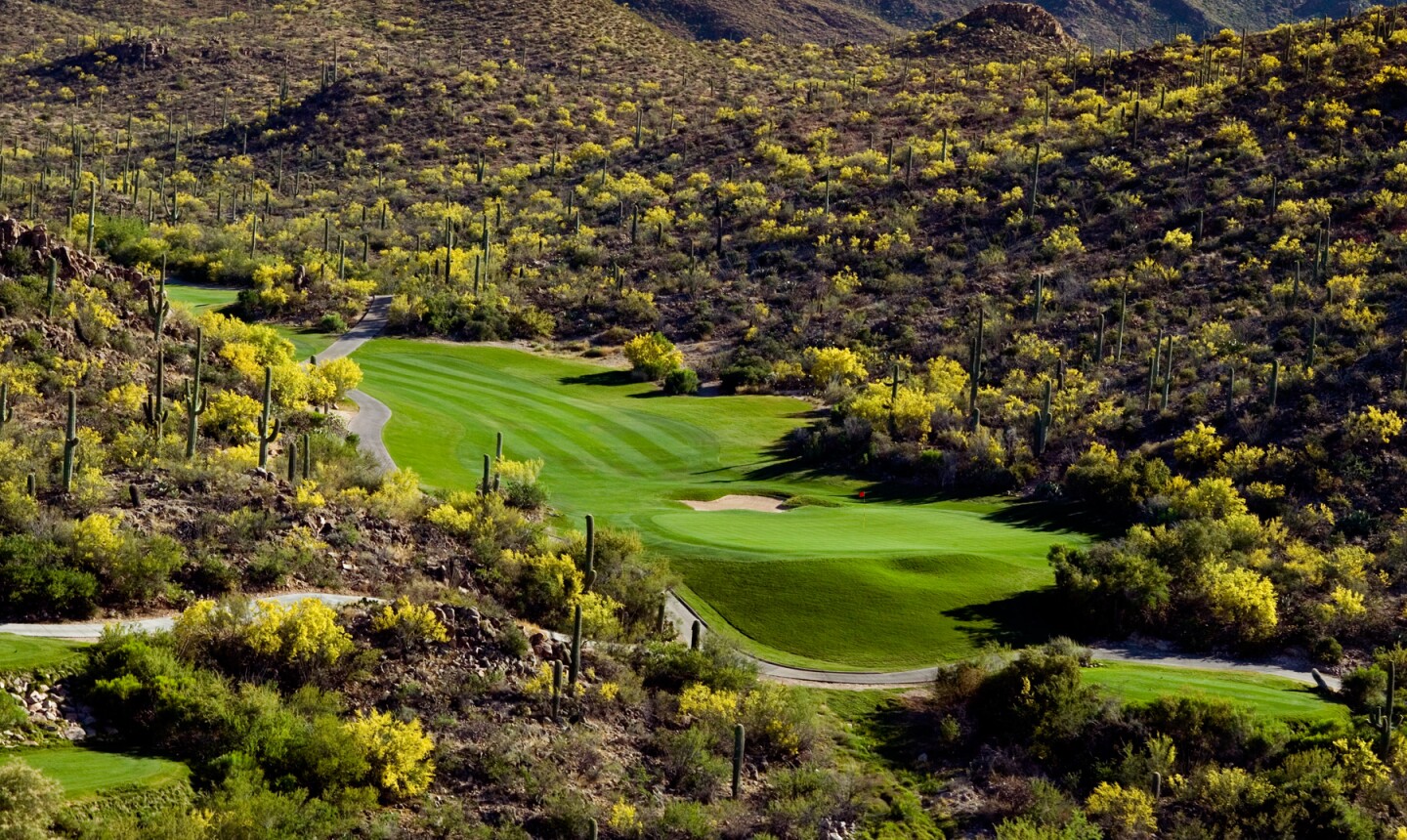 No. 6 on the Coyote nine at Starr Pass Tucson G.C. presents a tight-squeeze tee shot, blinded by a large rock pile, through the middle of two weathered, desert mountains. Courtesy of jwmarriottstarrpass.com 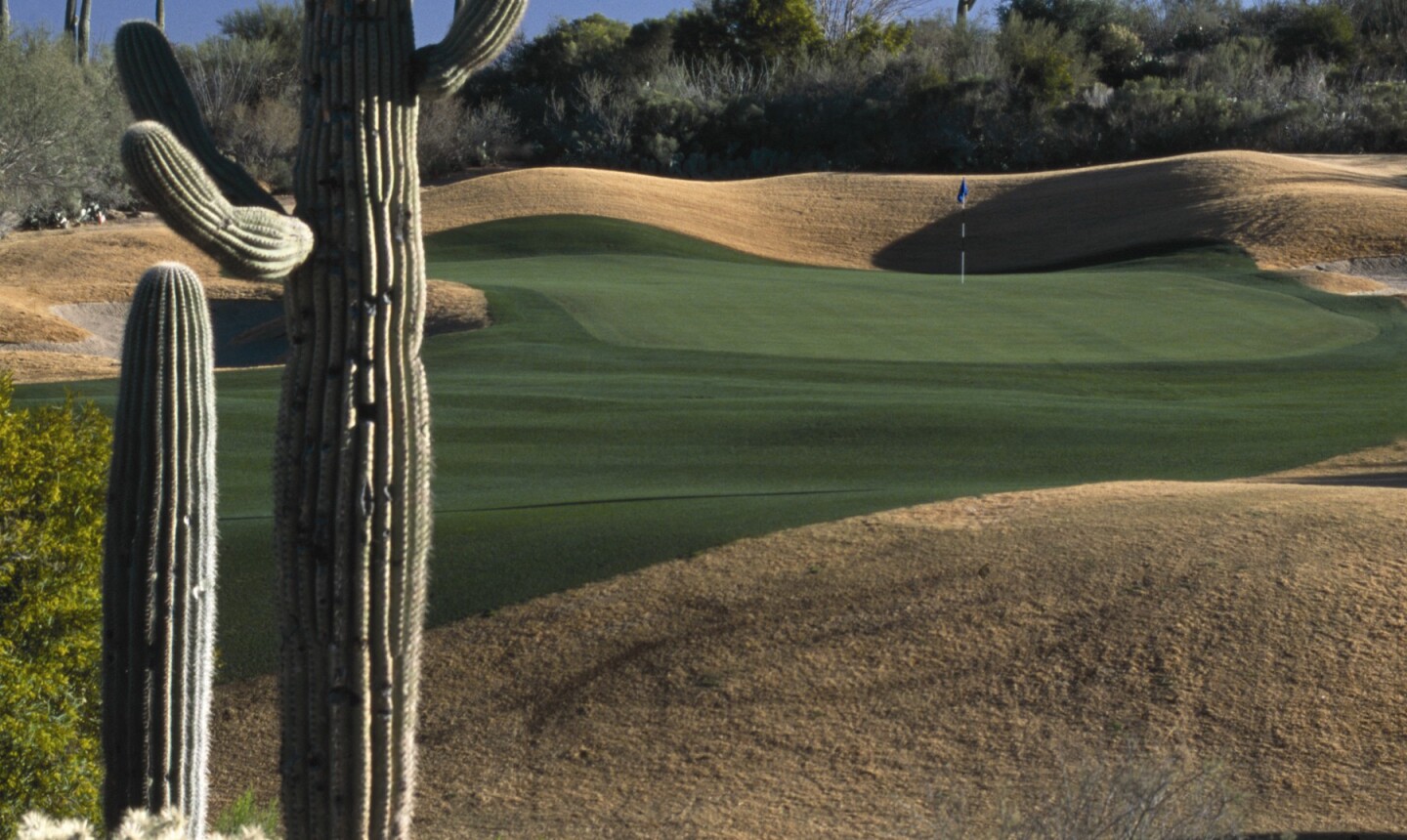 You might get a sense of the desert at Starr Pass Tucson Golf Club. But being up in the mountains, this course is far from desert flat. Courtesy of jwmarriottstarrpass.com 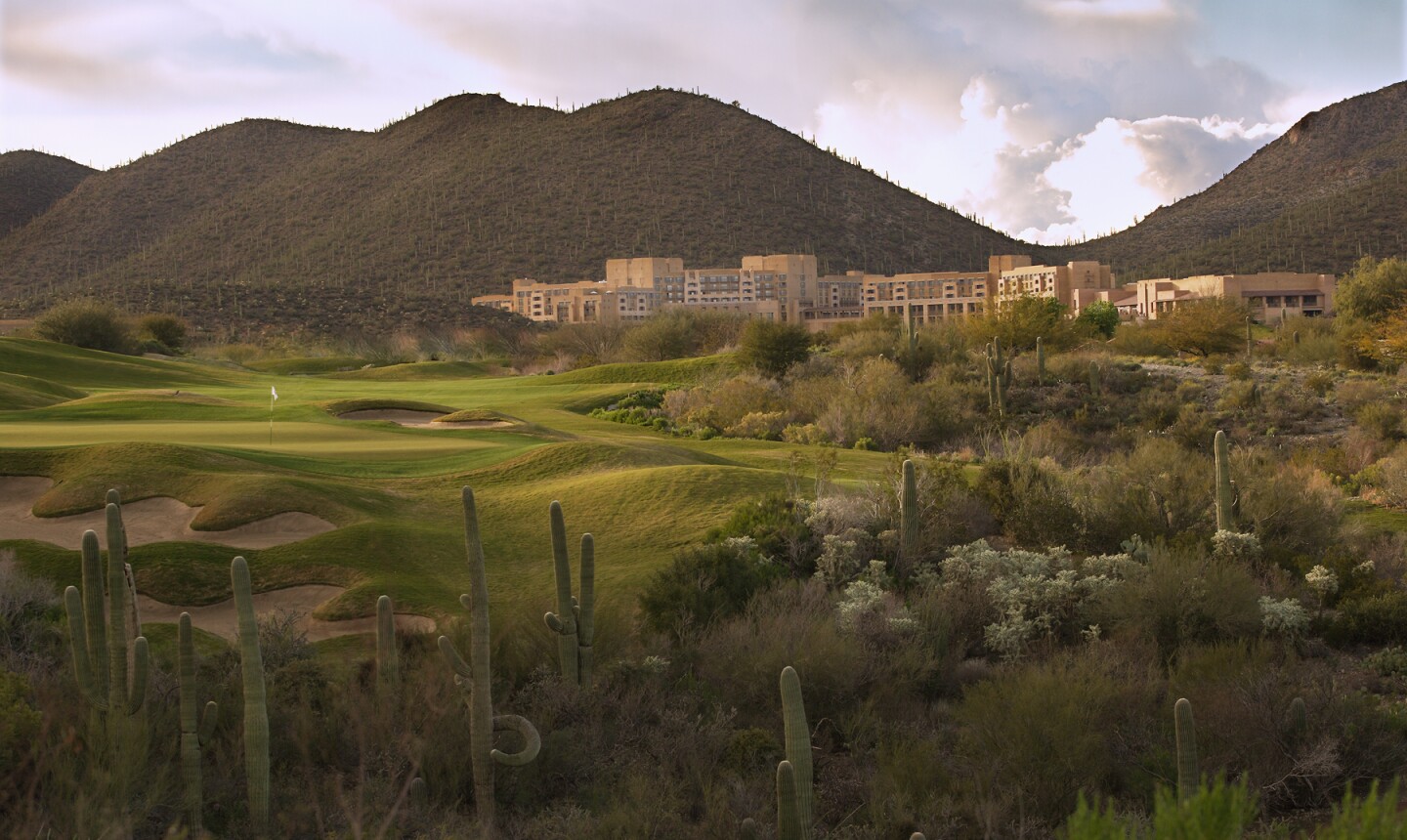 On the scenic land where Starr Pass Tucson Golf Club and the JW Marriott Starr Pass sit, Richard Starr crafted a stagecoach line more than 120 years ago. Courtesy of jwmarriottstarrpass.com

TUCSON, Ariz. – Few golfers who walk the sixth hole on the Coyote nine at Starr Pass Tucson Golf Club know it, but they're following a legendary trail on this 351-yard par 4.

Richard Starr crafted a stagecoach line through the rugged wilderness of the Tucson Mountains more than 120 years ago. He faced gigantic saguaros, dry washes, rocky expanses, nasty rattlesnakes and stifling summer heat as he carved a trail to the Old Pueblo - a settlement now called Tucson.

If you remain in play, an approach shot awaits over a deep bunker in front of the green, sloped from back to front and left to right.

Needless to say, when the Northern Telecom Open, also known as the Tucson Open and by many other names, was staged here in the 1980s and '90s, the sixth hole on the Coyote nine served as a favorite viewing spot for the patrons.

Former PGA Tour Commissioner Deane Beman, inspired by the natural beauty and rugged terrain, selected Starr Pass as a tour site when he saw the land for the first time. Bob Cupp and Craig Stadler designed the golf course as a Tournament Players Club (TPC) facility in 1986.

The tour players struggled here on the Coyote and Rattler nines. But a youngster from Arizona State named Phil Mickelson won the tournament as an amateur in 1991 and provided the secret to taming Starr Pass: Hit a lot of fairways, a lot of greens and make a lot of putts.

Mickelson did; many others did not.

So the Tucson Open moved on without Starr Pass. In 2004, the course was mitigated, returning as an Arnold Palmer Signature golf facility.

"The greens were a lot smaller and undulating, and the bunkers were very deep," said Todd Howard, director of golf at Starr Pass. "So those features were softened with larger, less contoured greens and more shallow bunkers. There wasn't a lot done tee to greens, except making the elevation changes a little less dramatic."

"Most first-time players are pleasantly surprised that the course is so much in the mountains," Howard said. "They think it is going to be desert flat, but it is far from that."

When the pro tournament visited annually from 1987 to 1996, Rattler's third and fifth holes rated as two of the most difficult on the PGA Tour, with the average score for 18 holes also among the highest on tour.

"It you bomb your tee shot, you can go for the green in two," he said, "but that will mean a second shot over a wash. The green is somewhat elevated, and the flag is protected by large bunker in front and the wash. But it is a flatter green that most."

Howard's favorite, the 510-yard, par-5 No. 5 on Rattler, requires a good, long tee shot to reach the green in two. Or you can lay up to an elevated plateau of fairway and throw an approach to a green sloped back to front.

Above the hole, Howard said, expect a very quick putt.

"It is a risk-reward hole, because of the blind tee shot," Howard said. "Some players try to drive it over the huge rocks, and others play conservatively. The green slopes left to right and seems narrow, so it is kind of an optical illusion and hard to get the exact yardage.

"Putting toward Tucson doesn't look that downhill, but it will fool you."

Realize from the first tee, with its sweeping view of downtown Tucson, that this golf course was built as a TPC - meaning it was laid out to challenge the best players in the world.

But if you can purge your mind of its difficulty and focus on the beauty of the rock-strewn mountains, you'll enjoy a fun day at Starr Pass.

Where to stay: The JW Marriott Starr Pass

The views of the craggy mountains are vast from each of the resort's 575 guestrooms and 35 suites that feature a private patio or balcony.

Swimming? One can drift along the Starr Canyon River, shoot down the Monsoon Falls Water Slide, lounge by the reflection pools and play in the dancing springs.

To dine, I headed north of the University of Arizona on Campbell Street for two distinctive restaurants: Acacia at St. Phillips for eclectic, new Latin and Pacific Rim food and Pastiche Modern Eatery for American-based cuisine with influences worldwide and creative pastries and desserts.

Kira K. Dixon
Lifestyle Correspondent
Now Reading
Starr Pass Tucson Golf Club offers an elite desert and mountain experience designed for the pros
New Cookie Policy
WE AND OUR PARTNERS USE COOKIES ON THIS SITE TO IMPROVE OUR SERVICE, PERFORM ANALYTICS, PERSONALIZE ADVERTISING, MEASURE ADVERTISING PERFORMANCE, AND REMEMBER WEBSITE PREFERENCES. BY USING THE SITE, YOU CONSENT TO THESE COOKIES. FOR MORE INFORMATION ON COOKIES INCLUDING HOW TO MANAGE YOUR CONSENT VISIT OUR COOKIE POLICY.
CONTINUE
Search Near Me