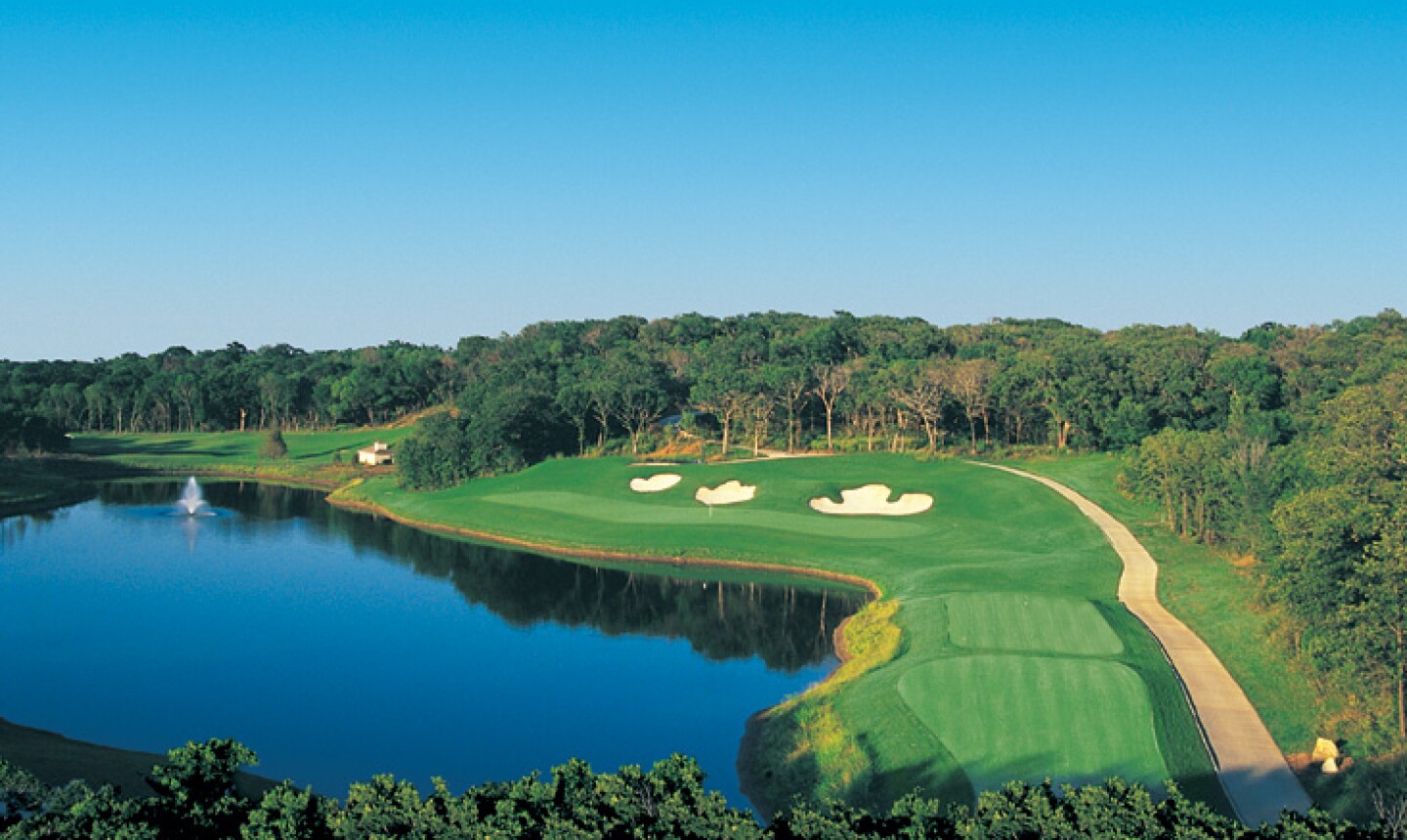 The par-3 third at Cowboys Golf Club not only presents a challenging tee shot, but a severely sloping green as well. Courtesy of Cowboys G.C. 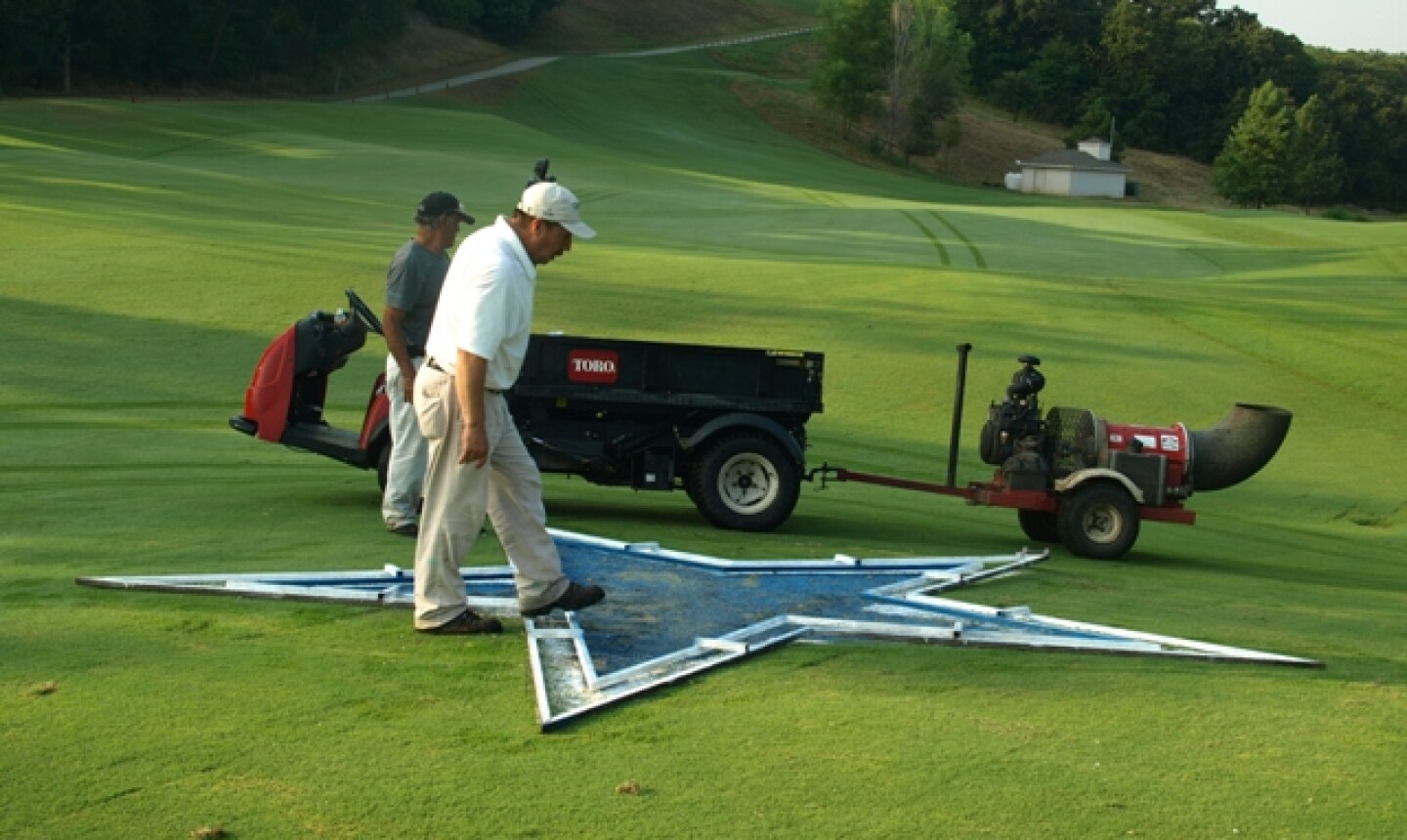 One of the more important duties at Cowboys Golf Club is painting the Cowboys star in the middle of the fourth fairway. Mike Bailey/Golf Advisor 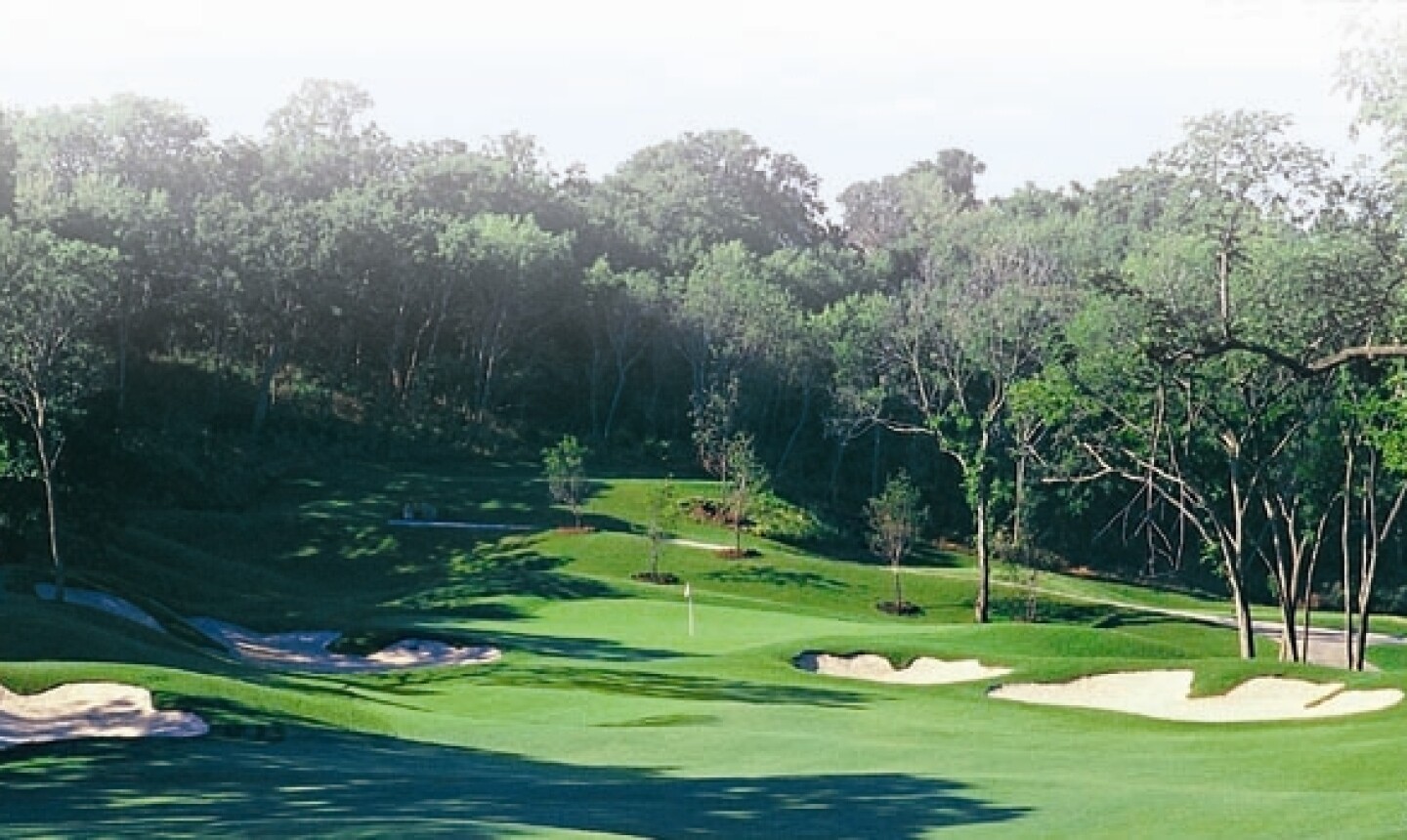 The short par-4 14th at Cowboys Golf Club is an opportunity to get a birdie before a tough finishing stretch. Courtesy of Cowboys G.C. 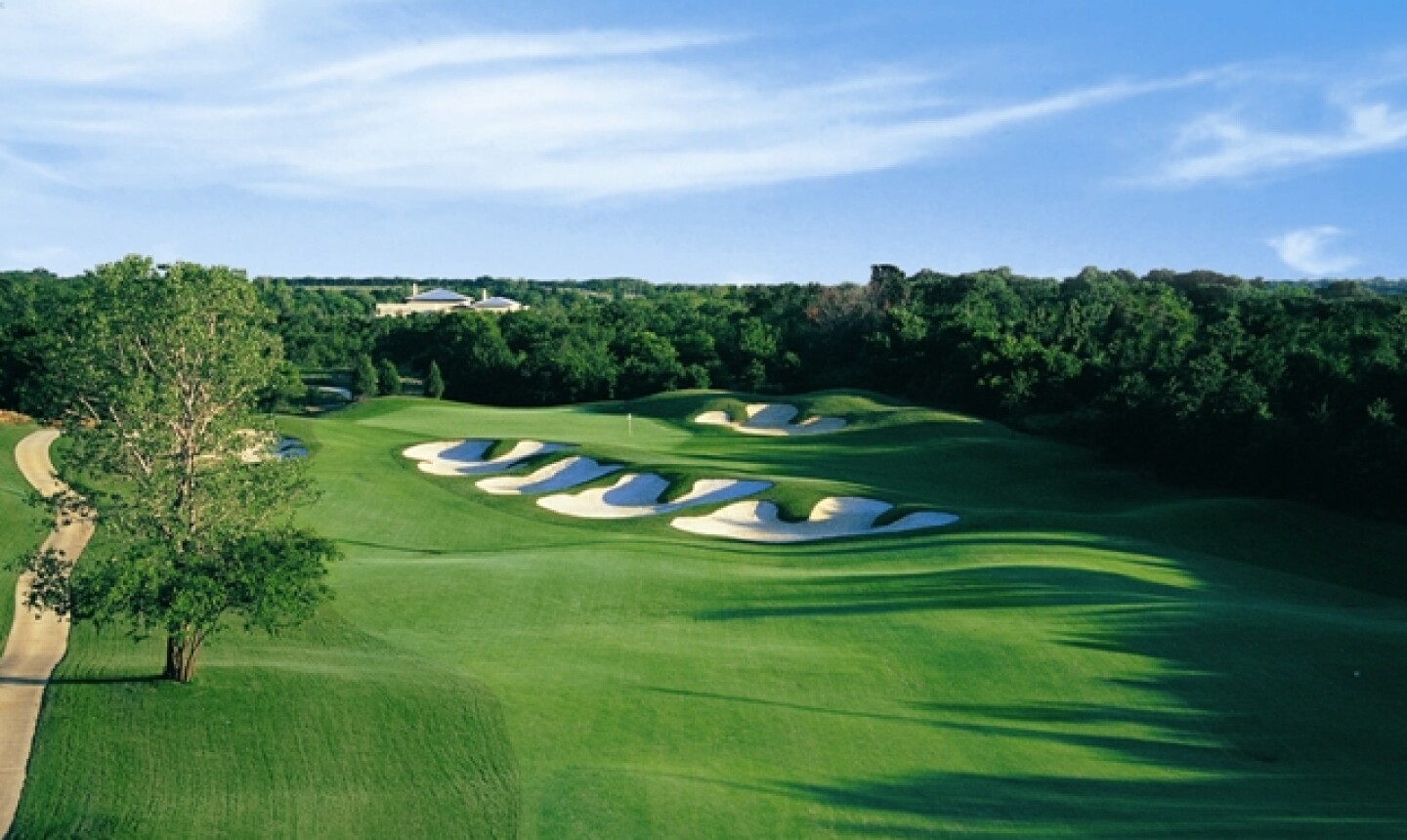 The par-5 finishing hole at Cowboys Golf Club is just 519 yards from the tips, providing an opportunity for strong players to hit the green in two. Courtesy of Cowboys G.C. 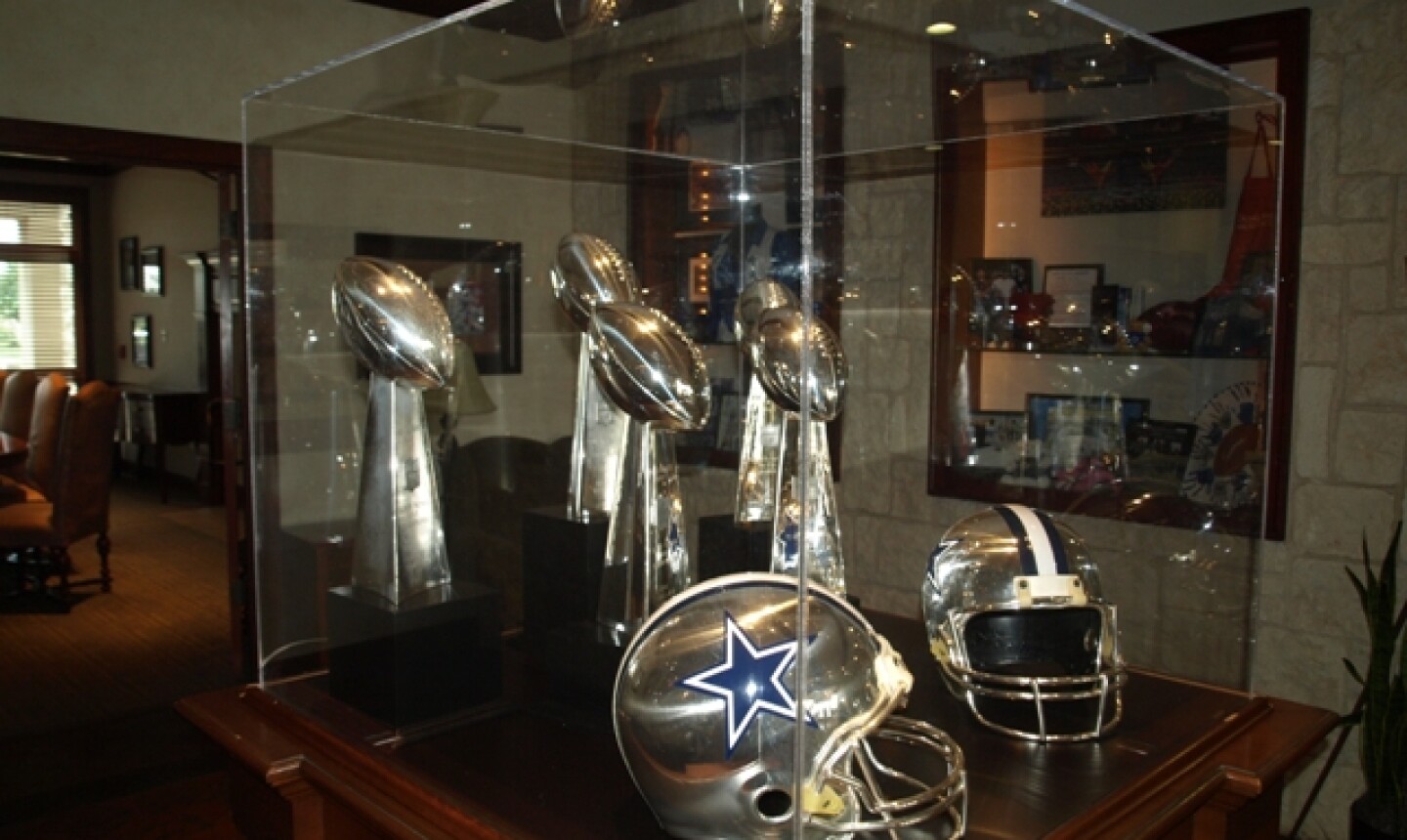 The Dallas Cowboys experience permeates from the golf carts with players' names on them to the Lombardi trophies in the clubhouse to the star painted in the middle of the fourth fairway. The attractive help, both in the clubhouse and at the halfway house between the seventh and 11th holes, wear Dallas Cowboys jerseys, and upon arrival, guests are greeted with play-by-play of Cowboys games over the loudspeakers. It is, after all, the only NFL-themed golf club in the country.

"We're in the experience business," said Cowboys Golf Club General Manager Hagen Cleek. "We're not necessarily in the golf business. We want everybody to have a good experience and a good time. If you're looking to come out and play in three-and-a-half hours, that's just not what we're into."

Indeed, schedule at least five or six hours -- maybe even more -- at Cowboys Golf Club, which is located just minutes from Cowboys Stadium in Arlington, where Super Bowl XLV will be played Feb. 6. Green fees include cart, range balls and all the food and non-alcoholic drinks that you want. So why not get there early, have breakfast, eat lunch on the course and sit a spell in the clubhouse after the round? Take the entire day off when you play Cowboys Golf Club.

How 'bout them Cowboys

There are parking spaces reserved for Cowboys players, who are allowed to play the golf course for free, even though Cowboys owner Jerry Jones no longer owns it. And it's not uncommon to see current and former players such as Jon Kitna, Miles Austin, Tony Casillas, Jason Witten and Drew Pearson taking advantage.

You might even see NFL players from other teams there, too, such as former Minnesota Vikings great John Randle, who was recently inducted into the Pro Football Hall of Fame. Even Randle (who is a Texas native) couldn't escape the Cowboys' grasp. Inside the clubhouse, it's anything and everything Dallas Cowboys -- shirts, hats, shorts, you name it -- and it's all logoed. And it sells well, which is not surprising since Cowboys gear accounts for more than a third of all NFL-licensed products sold.

On the golf course, you never forget where you are, either. Hole placards share stories of Dallas Cowboys history. And the giant blue star in the fourth fairway is the perfect aiming point off an elevated tee.

Yet, despite the Cowboys saturation, there remains a challenging golf course unlike anything else in this part of the state. Blessed with the natural rolling hills of Grapevine, there are nice vistas, plenty of steep-faced bunkers and few flat lies, especially on the greens. The fairways are generous, but as our starter pointed out, the course's ultimate defense is the greens.

The Tif-Eagle Bermuda greens average 8,000 square feet, and if you find the wrong section, a three-putt is likely. Nowhere is a green more diabolical than the third hole, the first of four pretty good par 3s. The hole plays over a lake to an extremely wide putting surface. If the flagstick is on the left, and you play safe right or to the middle of the green, you might have to putt through the fringe because of the severe slope back to front -- and you're unlikely to get it close.

Cowboys Golf Club has an excellent grass range and short game area, including a large putting green shaped like (you guessed it) the Dallas Cowboys star.

The facility also has an excellent lesson program headed up by top 100 teacher Sean Humphries, whose students have included Bill Parcells, Clint Eastwood and former Cowboys quarterback Troy Aikman, who improved from a 14 handicap to a 3 with Humphries' guidance.

It's conceivable that a diehard Washington Redskins or Philadelphia Eagles fan might struggle with the concept at Cowboys Golf Club, but anybody who enjoys golf -- and pampered golf at that -- should be able to let it go for a day. And if you're a Cowboys fan, well, this is golf heaven.

With that said, the folks at Eagle Golf, who own and operate the club with a licensing agreement to the Dallas Cowboys, strive to make this a unique experience, and it is. Green fees run around $180, but besides a few tips, you're done once you pay your fee. When you check in, you're given a magnetic VIP pin, and they do, indeed, treat you as such.

At the grill, you order off the menu, and the grub is pretty good. "It's not your $3 buffet," Cleek said.

And then there's the jalapeno sausage sandwich at the halfway house. Freshly grilled, it's become a favorite among customers.

"I can't tell you how many people have begged us to tell them where we get those," Cleek said. "We will never divulge that information because it is unique. We don't even serve it inside."

All in all, the Cowboys Golf Club is an experience to be savored and one of the best daily fee experiences in the state.

The city of Grapevine is located right next to Arlington and Fort Worth and has become a destination of its own in recent years. Downtown is loaded with choice restaurants and tourist attractions, including a couple of wineries, a vintage train, and a memorial to the flight crew of 9-11.

Cowboys Golf Club is also located across from the spectacular Gaylord Texan Resort and Convention Center, which is where the Dallas Cowboys stay the night before home games. The giant Texas-themed hotel has four distinct areas inside a dome, including a facsimile facade of the Alamo among its indoor gardens and waterways. Offering fine restaurants as well as a sports bar with a 50-foot big screen, the Gaylord Texan has partnered with Cowboys Golf Club for stay-and-play packages.

The Embassy Suites Outdoor World at DFW (located less than two miles from DFW International Airport) is another excellent nearby option, especially for families or buddies. The two-room suite includes sofa sleepers, two restrooms, complimentary breakfast and a daily manager's reception. The hotel is also connected to a giant Bass Pro Shop complex, where you'll find everything outdoors, including golf equipment.

Mike Bailey
Mike Bailey is a senior staff writer based in Houston. Focusing primarily on golf in the United States, Canada, the Caribbean and Latin America with an occasional trip to Europe and beyond, he contributes course reviews, travel stories and features as well as the occasional equipment review. An award-winning writer and past president of Texas Golf Writers Association, he has more than 25 years in the golf industry. Before accepting his current position in 2008, he was on staff at PGA Magazine, The Golfweek Group and AvidGolfer Magazine. Follow Mike on Twitter at @MikeBaileyGA and Instagram at @MikeStefanBailey.
0 Comments
Related Links
More from the author