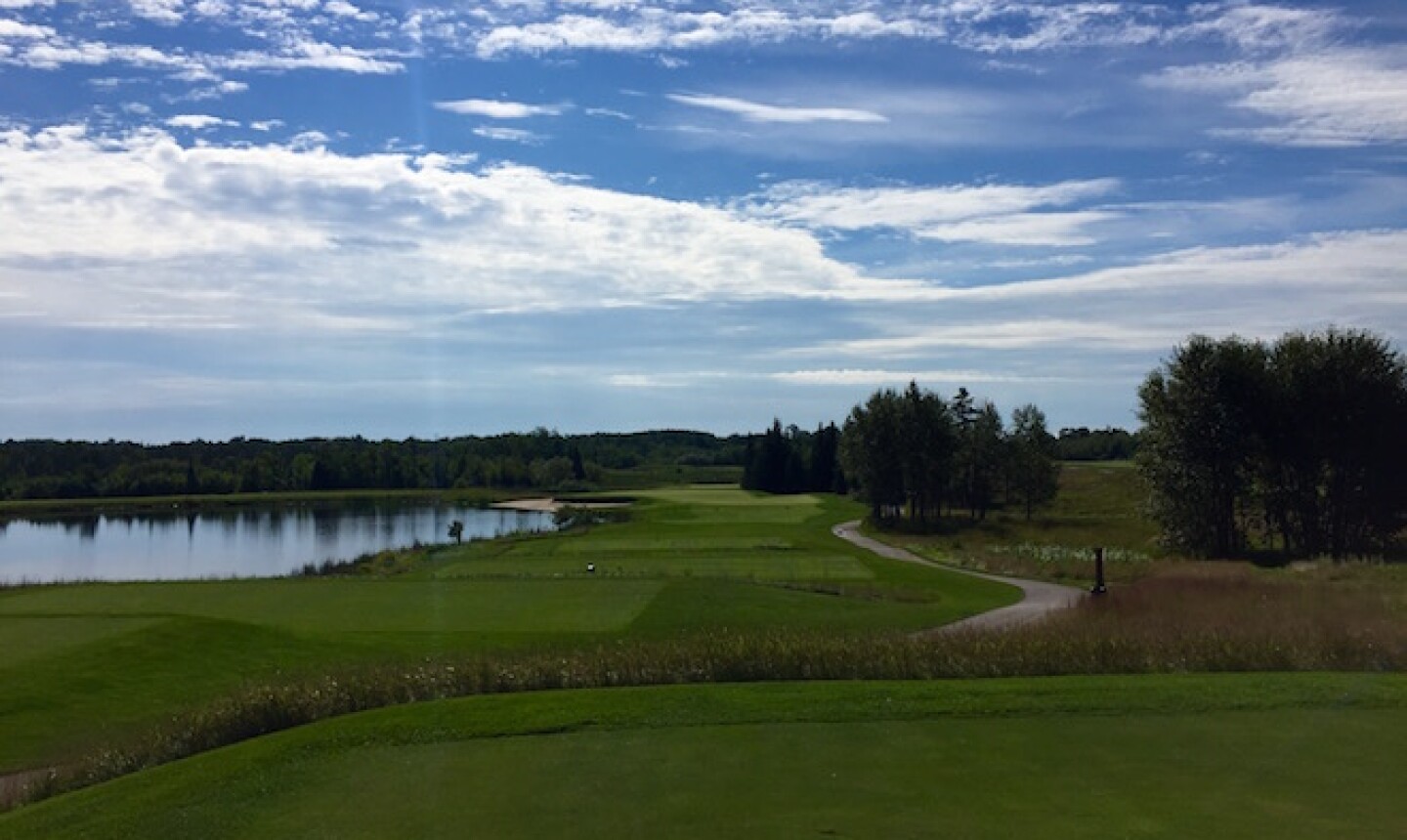 Sweetgrass blends the classic and modern as few courses can. This is the Biarritz-inspired par-3 12th.

If you've tuned in lately, you've probably heard me raving about the recent trip I took to the Upper Peninsula of Michigan and Central Wisconsin. I talked a bit about two very different but terrific courses in SentryWorld and Lawsonia Links last week, but today I want to get into the Michigan portion of the trip, to ultimately encourage you to put the region on your golf trip bucket list.

The "Mitten" of Michigan is well-known for its own golf riches. The Upper Peninsula - whose cheerful and friendly natives very much consider themselves residents of their own "Yooper" state altogether - has its own charm, characterized by fairly sparse population and lovely scenery, as well as some of the starriest night skies you'll see.

Escaping the stuffy summer heat of Florida for the crisp, cool evening air and balmy late-summer climes of the UP was, in short, a revelation. After a day spent in points north and east, I curled into the hamlet of Harris, home to Island Resort & Casino and its adjacent Sweetgrass Golf Club, which was one of the highlights of my entire trip.

Two architects. Two backgrounds. One cohesive course. Paul Albanese and Chris Lutzke, Sweetgrass' architects comprise one of golf's most interesting duos. Albanese cites Golden Age architects Donald Ross and A.W. Tillinghast as his main influences, while Lutzke spent many years as a regular associate of Pete Dye's, helping bring many of Dye's most famous courses (Blackwolf Run in Wisconsin and Old Marsh in Florida, to name just two) into being.

You can see both these influences working at Sweetgrass. What's more impressive: they don't clash. The bite-off-as-much-as-you-want angles off many tees is a clear Dye influence - as is the island-green par-3 15th - while the undulating greens echo the classic designers, as do the open corridors through which the course plays and the varied bunker shapes and sizes. Albanese and Lutzke paid direct tribute to classic architects C.B. Macdonald and Seth Raynor at the par-3 12th, which sports a long Biarritz green: upper front and rear levels and a deep lower trench through the middle.

Water comes into play on nine holes at Sweetgrass, but rarely does it require a forced carry, and it is manageable for players who play the right set of tees. Most importantly, the variety and intrigue inherent to the course makes it one guests will enjoy playing multiple times during a visit.

It's a casino course - fun, not silly. Casinos tend to trade in glitz and glamor, and Indian-owned ones such as Island Resort & Casino, operated by the Hannahville band of the Potawatomi Tribe, tend to play up native folklore and traditions throughout the property, including on the golf course. At some places it comes off as heavy-handed, but not at Sweetgrass, which gives the player a good local flavor without distracting from the task at hand: golf. Among the best touches: a Z-shaped formation of pilons forming part of the edge of the greenside bunker on the eighth hole. This feature pays tribute to a friend of the tribe named Zoie Brozowski, whose bequest of land in the Detroit area to the Hannahville Potawatomi helped pave the way for the construction of the resort and its golf course. Five holes later, a large wood carving of an eagle keeps watch over the green, and nods to the animal's great significance to the Potawatomi Tribe. These features lend a sense of context and place to the course that adds to the experience.

The course also showcases a bit of local flair, using iron bridges recovered from other parts of the region to direct cart traffic on a few holes, such as the aforementioned island-green 15th.

It's about to get a little brother. Following the adage that "one course is a curiosity, and two courses is a destination," Island Casino is in the process of building a second course that will complement Sweetgrass. Called Sage Run, the new layout - another Albanese & Lutzke effort - will be situated about 10 minutes from the main casino/hotel/Sweetgrass complex. Whereas Sweetgrass enjoys an open, gently rolling, almost prairie-like aesthetic, Sage Run is being carved through forest, with some dramatic elevation changes that will give it a different feel. So to will the maintenance style, which calls for just two rows of irrigation down every hole, with areas untouched by water left in a more natural state, à la Pinehurst No. 2. The result: a diverse two-course experience which should put the resort on the radars of more golfers.