The coolest and goofiest products from the 2018 PGA Merchandise Show 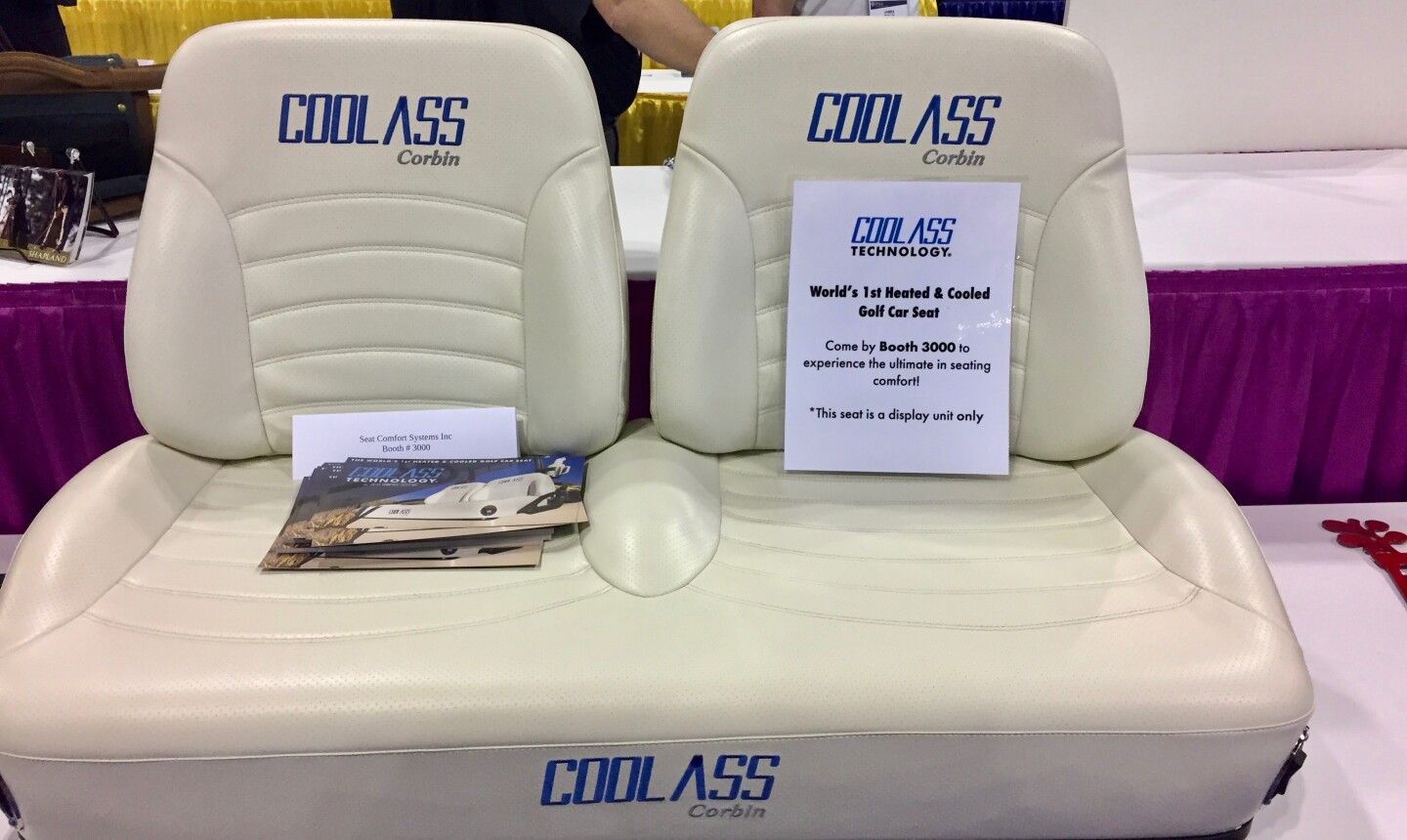 CoolAss golf cart seats were one of many off-beat products and pitches on offer at the 2018 PGA Merchandise Show. Tim Gavrich/Golf Advisor

Every late-January, a huge portion of the $70 billion golf industry convenes in Orlando. It is the golf trade show of the year, where more than 1,000 golf-related products and services companies – from the major club and ball manufacturers to the boutique, upstart apparel brands and training aid inventors and aspiring killer golf apps – share the million-square-foot West Concourse Exhibit Hall of the Orange County Convention Center.

I spent a good portion of PGA Merchandise Show Week – which kicks off with Demo Day at the enormous practice facility at Orange County National Golf Center & Lodge – perusing booths both great and small, looking for products and pitches that stood out to me as useful or particularly odd or goofy.

Here are my nominations for the coolest and goofiest products and pitches form the 2018 PGA Merchandise Show:

Part 1: The Coolest of the Cool and the Goofiest of the Goofy

Tour Edge’s high-end Exotics line of clubs –fairway woods in particular – has always been an under-the-radar favorite of pros, because the Chicago-based company does not pay golfers to use their clubs. But what really impresses me about Tour Edge is their HotLaunch series, which are a lot less expensive than most major manufacturers woods and irons but contain plenty of technology to give rank-and-file golfers the forgiveness and performance they need.

There have been a few companies over the years who have made putters that will stand up on their own, but they tended to be extremely ugly. Blodline uses super-light shafts to compliment their attractive aluminum putter heads. That different weight distribution helps golfers swing the putter more stably, as well as check their alignment on the fly. Pros, including Ernie Els, are starting to take to this concept.

The cadre of new exhibitors at every PGA Show is usually great fodder for the “Goofiest Product” nominations, but this one is a diamond in the rough, especially if you travel with your clubs and worry about the irons clacking together and getting dinged up. This one couldn’t be simpler – just slip it over your iron heads and they’ll be cozy and safe on your journey.

Acquisition by discount retail behemoth Wal-Mart has not stopped Bonobos from making sharp-looking and great-feeling apparel, particularly for golfers. Their wares are a bit higher-end, but you’ve got to look good to play good, right?

On-course snacking is something that a lot of golfers overlook (I’m terrible at it), and especially if it’s a warm day and/or you’re walking, you need some fuel to make it all the way through 18 holes at full strength. Julie’s Real will help you do that and is delicious – I’m partial to the Cacao Coconut variety myself.

Ah, alternative forms of golf course transportation! This one seems to tick all the boxes of silliness: it’s huge, odd-looking, hard to use and severely limited – you can’t pedal it backwards and it won’t work on slopes of even moderate grade. Oh, and it’s effectively twice as expensive as a golf cart, because at $4,000, it only accommodates one golfer, whereas carts carry two at a similar price.

I defy you to look objectively at that messy script and tell me that you could immediately tell that it says “Charles Vane.” I think the First Rule of Branding should be, “Make sure people know what your brand is called.” The clothes are nice enough, but this one needs some rethinking.

Points for the direct approach to naming this product, but golf carts are expensive enough as it is for golf facilities. Isn’t this a bell and whistle too far?

The golf tee is a simple, cheap effective and ubiquitous golf item. So why not make it bulkier, more expensive and twice as likely to stab you in the leg while in your pocket?

This is an example of something that’s goofy but fun at the same time. Rainwear maker Zero Restriction invited pairs of golfers to step into a clear cage of sorts and hit pitch shots at a target while being showered with water, in order to demonstrate the rainproof nature of Zero Restriction’s garments. Goofy, yes, but eye-catching and clever as well.

Reliving the inglorious days of my youth at the @PGAShow in Orlando. Some simulators like this one from HD Multisport out of Canada, feature other sports besides golf, but golf is at its core. pic.twitter.com/y55DyBfuuv

I also uncovered several sorts of golf products with vendors covering the spectrum from cool to goofy. Here are some of those pairs:

This one is literally cool, as it contains a built-in storage compartment designed to keep as many as four 12-ounce cans cold for hours. It also features BagBoy parent company Dynamic Brands’ Top-Lok™ system, which allows it to attach easily and securely to a BagBoy push cart.

I applaud OUUL’s fashion-forward approach to golf bag aesthetics, but these black-and-white camo patterns are a little too military-bovine for my tastes.

These German-engineered socks are snug, but feel great on the calves and came in seriously handy (or footy?) while I was walking a few miles each day on the Show floor. They’re also great for long-haul drives and flights, so pack a pair in your travel bag.

Stance is known for some interesting patterns on their socks, but these are a little out-there for me, personally. The fewer people shouting “Noonan!” at me while I putt, the better.

Danish shoe company ECCO has staked out a nice-sized territory among golfers who appreciate its high quality approach and demure but dignified European aesthetics. I almost always wear ECCOs, myself, but Portuguese shoemaker Kankura really impressed me with their product this year. They use cork – a lightweight, breathable, plentiful and sustainable material found throughout Portugal – in the production of their shoes’ soles, and the leather upper portions both feel and look great. The shoes are manufactured entirely in Portugal, too, keeping the company owners very close to the whole process.

These strap-on club brushes don’t look cool on any golf shoe. Clown shoes, maybe. Just keep a towel nearby while practicing or playing and you won’t have to deal with this unnecessary gadget.

Cornhole is a favorite game of tailgating events and bars with outdoor patios, and so it was inevitable that a golf version was going to be developed. CHIPPO uses soft, almost NERF-like golf balls, which are hit into nets in the board. I think this would be excellent on a beach.

This is the frattier, dingier cousin of CHIPPO, with red SOLO cups replacing the nets. That seems to be the only real similarity with beer pong, as this version wouldn’t really work if you filled the cups up. And who wants to drink golf ball-flavored beer, anyway?

Bradley, out of Grants Pass, Oregon, is named for founder Bradley Converse, an expert in the science of vibration and impact who previously helped design military equipment strong enough to stand up to a nuclear blast. Converse swears up and down that stabilized wood – dried and filled with a natural hardening substance is a superior putter material to metal. His putters double as high-tech and high-art objects, and can be completely customized to clients’ specs. His shop also offers combined putter-fitting/fly fishing/golf-at-Bandon-Dunes experiences.

These putters are wooden from grip to head, and interesting looking if significantly less engineered than the ones from Bradley. What caught my eye, and made me scratch my head, was the use of an image of Miguel Angel Jimenez putting, flipped to make him look left-handed. Why?!

Which products and pitches stand out to you on this list? Be sure to let us know in the comments section below!

Compression socks for golf! I love it...where can I get my hands on those CEP socks? My feet swell really bad when I play.

I am in 5th stage kidney failure and being handicapped how can I get tickets for the PGA show for 2019. I only have a few years to live and one of my dreams is to attend the PGA show. I manage to play golf (9) wholes and I am a part time teacher for First Tee of North Florida. pleas help me live out one of my dreams before I die. Richard Vallone (904)907-6165

That Teefork tee is a brilliant idea.Think you missed the point Tim. It actually de-clutters your pocket because you don't need lots of them and it doubles as a divot (pitchmark) repairer so 2 for the price of one. Being a bit bulkier it is easier to find and they don't break. Easily the best tee I've ever played with and well worth the money.

GOLF is a wonderful sport for all ages.

I like the BloodLine Putter. I like the ability to have the putter as an alignment aid which I currently do now with my current putter only thing is I can't let it go as it doesn't stand up on its own. The combination between the lighter shaft and aluminum head makes it even feel better when making a putting stroke. The red anodized finish and the black graphite shaft is a beautiful combination and the clean lines of the putter head adds to the overall look of this putter.

The one I saw that I liked was the Acu Strike Golf mat that was a fabric golf mat that clearly shows your divot pattern and club path on each swing -- I ordered one at AcuStrikeGolf.com for $39.95---- Jim McLean had great things to say about it on his radio show !!

Did not see any good training or practice tools. Dispointment not see a good training tools.. I have multiple, the best trading tools already made / developed and hoping to bring it out this year..don’t need to go to Golf show to see the fashion show..