The 8 Best Links Courses to Never Host the Open Championship 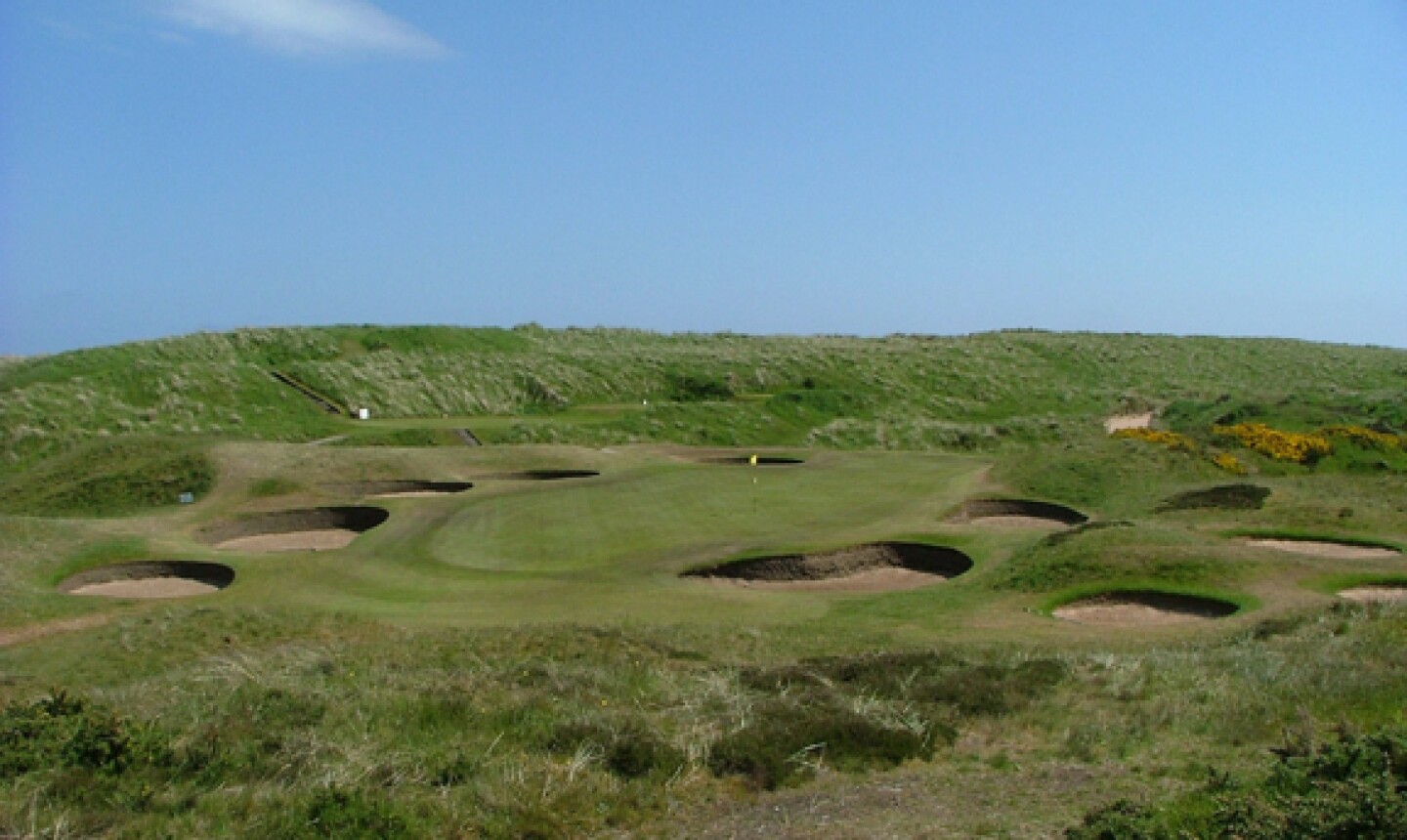 You’re probably familiar with all of the courses of the Open Championship rota by now.

You know the ones: The Old Course, Carnoustie, Royal St. George’s, yadda yadda yadda, not to mention jolly old Royal Birkdale, which hosts the Open this week.

But what about the “best of the rest?”

In this case, many of "the rest" are better than the Open venues themselves.

These links courses in the Isles will never host an Open, but they are "must-play" courses for your next UK golf trip.

We’re going to limit this list to bona fide links courses because there are so many great courses in the U.K. That includes England’s incredible heathland courses, which we covered here.

The Open’s 2019 return to another Northern Irish gem, Royal Portrush, makes us feel particularly good about mentioning Royal County Down, which may be the world’s greatest links. Spectacular scenery, a wild dunescape and a consistent, engaging, fun challenge makes County Down one of our favorite places to play golf anywhere. The long par-4 ninth, with views of both mountains and sea, is worth the greens fee alone.

Few golf courses can claim direct influence on two of history’s greatest all-time golf course designers, but Royal Dornoch can. Donald Ross grew up playing the course and Pete Dye’s pilgrimage to Dornoch early in his career proved critically influential. If that isn’t enough to convince you to go, consider the course’s tremendous seaside setting.

Situated as it is in the middle of the Kingdom of Fife, Scotland, this Kyle Phillips-designed modern links is a must-play course for anyone visiting the area. Even more so than the polarizing Castle Course at St. Andrews, Kingsbarns is a beloved modern course that serves as a wonderful complement to all the ancient links tracks nearby. Half a dozen holes border the North Sea, highlighted by the cliff-hanging par-3 15th.

Rye is one of the most historic courses in the U.K. outside the Open rota, which it will never join, although it has hosted Open qualifying many times in the past. In particular, it is a haven of alternate-shot play. The course is a par-68 layout, but don’t let that fool you into thinking the course is easy. It’s a great challenge, sleeper-lined bunkers and all.

A ways north and east of Aberdeen lies Cruden Bay, a Tom Morris/Archie Simpson design that dates back to 1899. The original 5,300 yard course has grown to just shy of 6,300 yards, which makes it far too short to host an Open Championship but plenty long enough to delight any visitor.

The European Tour (especially winner Justin Rose) loved Royal Aberdeen (pictured at the top of this article), which has hosted the Scottish Open and was the site of the 2005 Senior Open Championship, won by Tom Watson. It features one of the golf world’s best and toughest front nines, and the inward half is no slouch, either.

Royal West Norfolk, also known as Brancaster, features a unique entrance road in the world of golf. The long-ranging tides on the nearby beach have been known to inundate cars traversing the road at the wrong time of day, and golf balls can suffer similar fates on a number of holes.

One of the world’s most fun and quirkiest courses, North Berwick is something of a pilgrimage site for golf course architecture buffs in particular, but everyone gets a kick out of the course that is known as the birthplace of the Redan hole (the 15th), with its banked green and fearsome flanking hazards.

What are your nominations for the top courses in the British Isles that have yet to host an Open Championship? We know we left some great candidates out; help us round out the list in the comments!

I loved that someone mentioned Brora! You would have to remove the sheep and the electric fence around each green. Don't think the pros will like that. I agree Royal Porthcawl is very worthy. But like Royal Dornoch, i don't think these venues have the capacity to handle the types of crowds the Open Championship draws. Too bad it can't be held in Ireland. Lot's of great courses there!!

I considered playing Kingsbarns but the 400 quid green fee rather put me off. That 400 quid (500 dollars) would pay a considerable chunk of the annual membership fee in a lot of links clubs in Ireland and ALL of the fee in my club (a publicly owned links course) For those with deep pockets by all means play the likes of Kingsbarns and Doonbeg, and enjoy them! But for the rest of us there are plenty of excellent courses you can play for under 50 euro and many more in the 80-100 euro bracket. Dooks, Carne, Ballyconeely (Connemara) Enniscrone, St Annes (right in the centre of Dublin City) Baltray, Bettystown, the Island and many, many more. As for the name of my club, well that will have to remain a secret, don't want the place over-run with bargain seeking Yanks!

Machrihanish has to be experienced . 30 mins from Glasgow (inexpensive flight/package)-quintessential wild Scottish links on the edge of the world . Next stop Montauk . .Old Tom may have got the idea for the short 4th from the 10th at Pine Valley .. or maybe it was the other way round and at least there's sand in the front bunker !

You can't build, buy or design charm but it can be found readily at Elie , North Berwick , Shiskine (where's that ?)and always always at Western Gailles .

Love Don McBride's comment! My husband has recently passed away - just before he got sick a few years ago we did amazing Scotland/Ireland golfing Mecca trip.... faves were, LaHinch, Ballybunion (old), Waterville &amp; Castle Stuart, Turnberry (Ailsa) &amp; 2 not mentioned but poss the best as we were the ONLY people on this pristine gorgeous course (&amp; had to shut the gate behind us!) was Machrihanish Dunes. The other was Pitlochry in Scottish Highlands (not Links but fantastic) I'll be going back sometime to do unfinished 'business', Old Head + Nth Ireland &amp; Royal Dornoch, Gullane &amp; Nth Berwick

Love Don McBride's comment! My husband has recently passed away - just before he got sick a few years ago we did amazing Scotland/Ireland golfing Mecca trip.... faves were, LaHinch, Ballybunion (old), Waterville &amp; Castle Stuart, Turnberry (Ailsa) &amp; 2 not mentioned but poss the best as we were the ONLY people on this pristine gorgeous course (&amp; had to shut the gate behind us!) was Machrihanish Dunes. The other was Pitlochry in Scottish Highlands. I'll be going back sometime to do unfinished 'business', Old Head + Nth Ireland &amp; Royal Dornoch, Gullane &amp; Nth Berwick

Can't believe I read that many comments and a true links gem was never mentioned once...Machrihanish.
Links golf at it's best and the best opening tee shot in the entire UK right over a public beach.
Royal Dornoch is my favorite course in the world and Cruden Bay not far behind.
Portmarnock deserves more love. Carne needs some cash and a tad more care but it's an amazing track.
Trump's work on Turnberry with the new ocean holes and overall upgrade of the course makes it one of the best in the world. Shocking that they have yet to give it a date for another Open.

Anyone play a course in Scotland called Ladybank? A friend recommended it.
I played Carnoustie and St Andrews a number of years ago and it's nice to have them on my list of have dones.
Trying to plan a trip to Ireland/Scotland next year. All your suggestions are great and it looks like I need to spend a couple of months to get them all in.

A vote for Hillside.

For great fun and a spectacular setting Nefyn is fantastic, but no where near the conditioning as an open alternative.

You should also consider Southerness and Silloth - both on the Solway.

Gosh, have played all 8 and every single one mentioned by others, including Cabot Links (fab!) with exception of Dunbar and Tain. I did complete all Top 100 in British Isles in 2009. I think you nailed it in UK - as for commentary, County Down is tops, North Berwick and Western Gailes the best 'gems', Rye doesn't cut it (despite four superb par-3s), Dundonald may be up for review after the Scottish Open, and two 'fun' links not mentioned are Nefyn &amp; District for spectacular scenery and Pennard for the 'purity' of the Links experience, like Brora in that regard.