The Place to Be: Palm Beach National in south Florida uses videos, music, fun to attract a younger crowd 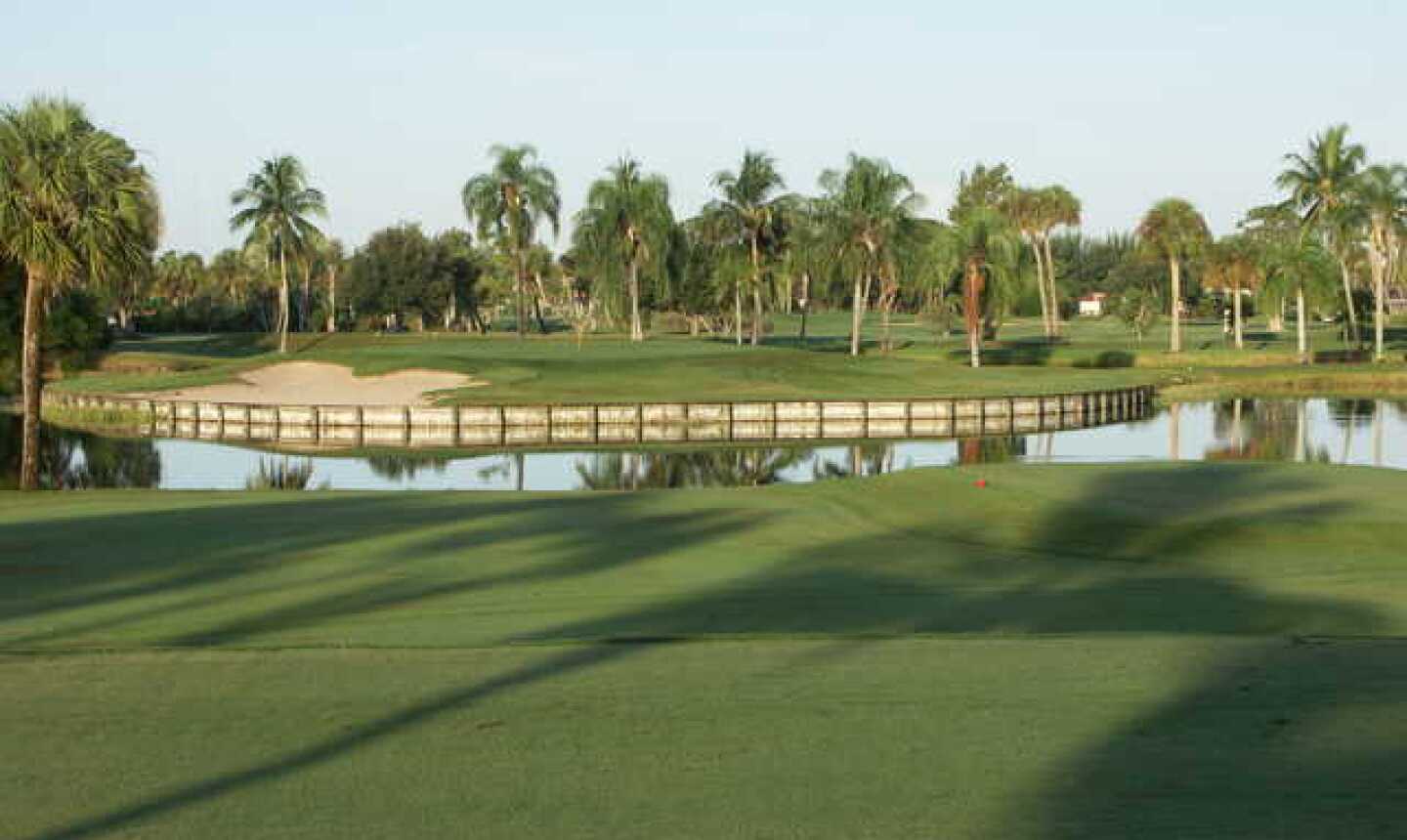 A real 'cast of characters' has made Palm Beach National the "place to be" for golfers in south Florida.

The public course in Lake Worth, Fla., has cranked up the fun to attract a younger and more diverse clientele. It uses social media videos made by the staff to lure the cell phone generation to come play golf and then wins them over by offering a free shot of rum when the golfers of age check in. Everybody who pays for a round gets the use of free Blue Tooth speakers and a USB cord, so they can listen to music in their carts.

Bushwood Country Club, Palm Beach National is not. The latest video, "Me and My Pro V", has got some fun visuals and a theme we can all relate to: Losing expensive golf balls in the drink.

The older "Drop the Plumb Bob" song is a rap music video made to remind golfers to play faster by skipping the plumb-bob while putting.

Critics who believe the videos are only for show need to look at the club's bottom line. In 2016, the course beat its revenues by 35 percent from 2015, according to General Manager/Managing Partner Michael Dahlstrom. From the fourth quarter of 2016 to the first quarter of 2017, "we are up $150,000 in green fee revenue" and rounds are up 6,000 for the first four months, he added.

"It (our videos) has definitely shifted the vibe from what people see as a traditional mindset to a fun, friendly, energetic atmosphere," says Dahlstrom, known as ‘Mikey D' in the videos. "The shift of the vibe is our biggest asset. The branding of our staff is what was powerful. We have specifically targeted those people in South Florida with a golf interest."

PBN started producing and promoting high quality videos last June. The videos all promote Palm Beach National as the "place to be." The Paradigm Golf Group, which manages the club, uses social media videos at other courses in its portfolio, but each market determines the level of "craziness", Dahlstrom says. For more videos, check out Mikey D's Facebook page.

Staff members at Palm Beach National often appear in the videos with the nicknames they've been given at the club. There's Wingman Jimmy Jam and Snapchat Adam E. Chuck Workman, who teaches lessons and plays golf at the club, is simply known as the "Godfather of Golf." The 82-year-old has had a long career in the game. He found success playing in 60 PGA Tour Champions events while still running the pro shop at the famous Bethpage State Park on New York's Long Island in the 1980s and 1990s. Workman calls the club the "Fountain of Youth".

"The age (of the golfers) has gotten lower from what I've seen," Workman says. "At a lot of clubs down here, (age) 69 might be a youngster. Golfers (here) have got the hat on backwards. There is music playing on the first tee. Everybody is always smiling."

Dahlstrom tries to create at least 1-2 videos a week and larger projects like the music video every 2-3 months. He says PBN has used videos on social media to sell out a glow-golf event in six hours, a putting contest that attracted 75 golfers trying to win a chance at free golf for a year and a two-person scramble promoted only on Snapchat and Facebook. The marketing cost of one of these promotions was $27, he noted.

"Our whole mantra is to make you smile," he says. "It is not always sales driving. It is about branding. Our videos rarely talk about green fees or course conditions. It's just about getting you to laugh.

Hey you NUT job Mikey D, I have played Palm Beach National for years and over the years it lost members and it did not feel like a golf course to tell you the truth it felt like a MORG !! Mikey D has brought this place back to life !! I love the place the course is a great lay out,the course is in great shape keep up the GREAT WORK & the videos !! Heck you cant beat the price or the players card specials and the staff is not bad either. " I should have been a tour pro "

Hey, I play Palm Beach National all the time because the vibe is so cool.I feel energized and at home every time I'm there. The coolest course in South Florida.

No place like PBN, Mikey D and all the P2B celebrities always make it a great time.  Many choices in South Fla to play but my husband and I choose PBN.  I hope Benny Eggz creates and album, he did a great job.  I want to be in the next video!!

Thank you Mikey D and Benny Eggz for making us all smile with the coolest golf rap video of all time.  Look forward to the next one...  Always love visiting the PBN!!