I know it's every golfer's dream to play the legendary private club, but let's focus on reality. You ain't gettin' on. Golfers need to realize there is more to golf on the Monterey Peninsula than just Pebble Beach Golf Links and Cypress Point.

Until I moved to California in 2014, I had never heard of many of the public choices beyond the big names on 17-Mile Drive. There are 25 18-hole courses -- plus two nine-holers -- on or very near the peninsula. They offer plenty of variety and price points. Some are priced dynamically online and you can find some great bargains. This doesn't include such prestigious courses you know about like Pasatiempo and CordeValle, which we've kept off this top 10.

Thanks to a mild year-round climate, evidenced by Pebble's February placement on the PGA Tour calendar, golf is never out of season. In honor of the AT&T Pebble Beach Pro-am, we've chosen the 10 best public-access places to play in arguably America's premier golf mecca.

My top 10 courses you can play on the Monterey Peninsula

This par-70 resort course, the only Pete Dye-designed course in northern California, rides the charismatic hills of the Carmel Valley, playing through vineyards and over water hazards. The resort recently unveiled new updates to make a stay-and-play more attractive. 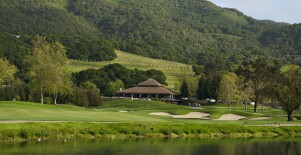 Shorter than 6,000 yards long, Pacific Grove doesn't have the chops to host the pros, but it's got something every course desires – an extended view of the ocean. The back nine, built in 1960, explores the shore near the Point Pinon lighthouse. Its nickname, based on its $50 dollar green fee, is the "Poor Man's Pebble Beach".

The 2008 redesign by Gene Bates transformed the two aging Fort Ord courses into two premier championship tracks that have hosted the 2012 and 2018 PGA National Championship and 2015 Senior PGA National Championship. The 7,024-yard Black Horse is a bit easier than its sister course thanks to wider fairways. The new par-3 15th hole probably offers the property's best views of the Monterey Bay. The jagged-edge bunkering looks cool until you get stuck in an awkward lie.

Bayonet became the area's best value after the Bates redesign. Holes 11-15 are nicknamed Combat Corner for the parade of demanding par 4s that dogleg left, but there's plenty of other strong holes on this tough 7,014-yard layout. Is your game ready for a fight?

The wetlands and natural areas don't let Spanish Bay live up to the word "links" in its name. The ocean breezes and stunning coastal views do, however. Tom Watson, Sandy Tatum and Robert Trent Jones Jr. collaborated on the 6,821-yard design in 1987. It's a tough test with so many cross hazards and such extreme green complexes. Golfers who finish near dusk are entertained by the sounds of the bagpiper who plays every night.

Some golfers actually favor this 6,960-yard design by Robert Trent Jones Sr. over Pebble Beach. The first five holes dive into dunes of white sand and tangled ice plant. The rest of the round disappears into the Del Monte Forest with ponds lurking on two short par 3s (nos. 12 and 15) and two par 5s (nos. 7 and 14). Even pros have to respect the uphill climbs and elevated greens of one of the toughest courses on the PGA Tour.

What else is there to write about Pebble Beach? Besides its annual celebrity-laden PGA Tour event every winter, Pebble Beach has hosted six U.S. Opens. No course in America uses its coastal cliffs better. Its $575 greens fee is certainly a lightning rod. Would you pay it to play? I have.

My dad played Pebble Beach in 1960 for $10. I was 8 years old. Since then my goal has been to play pebble beach. On September 4 & 5 2017 my dream came true at age 64. I got to play spy glass and pebble beach. My wife road along with me on pebble. It was a life long dream come true. It cost me an arm & a leg to play but was well worth it. If I ever get the chance to play it again, with out a doubt , YES.

I agree with Matt's rankings from top to bottom. But calling the re-design at Poppy Hills a "more interesting" layout is entirely subjective. He specifically mentions holes 10-12 as the new "Amen Corner," but it is those holes in particular that were made LESS interesting. Number 10 used to be my favorite hole in golf, but the design team decided to re-route the 10th green that wrapped around a pond. Visually, the new look is uninspiring. The par 3 11th used to be one of the coolest holes on the course with a 175 yard shot that made your knees shake with a 3-tiered green. Now that hole is  a throw-away 100 yard wedge shot in the opposite direction. And Number 12 used to be a severe dog leg par 5 that was one of the best risk-reward tee shots on the Peninsula. Now it is a straight-away long par 4. Ho-hum.

You make some decent points, but part of the redesign was changing the 9’s around, so you’re describing holes one two and three.