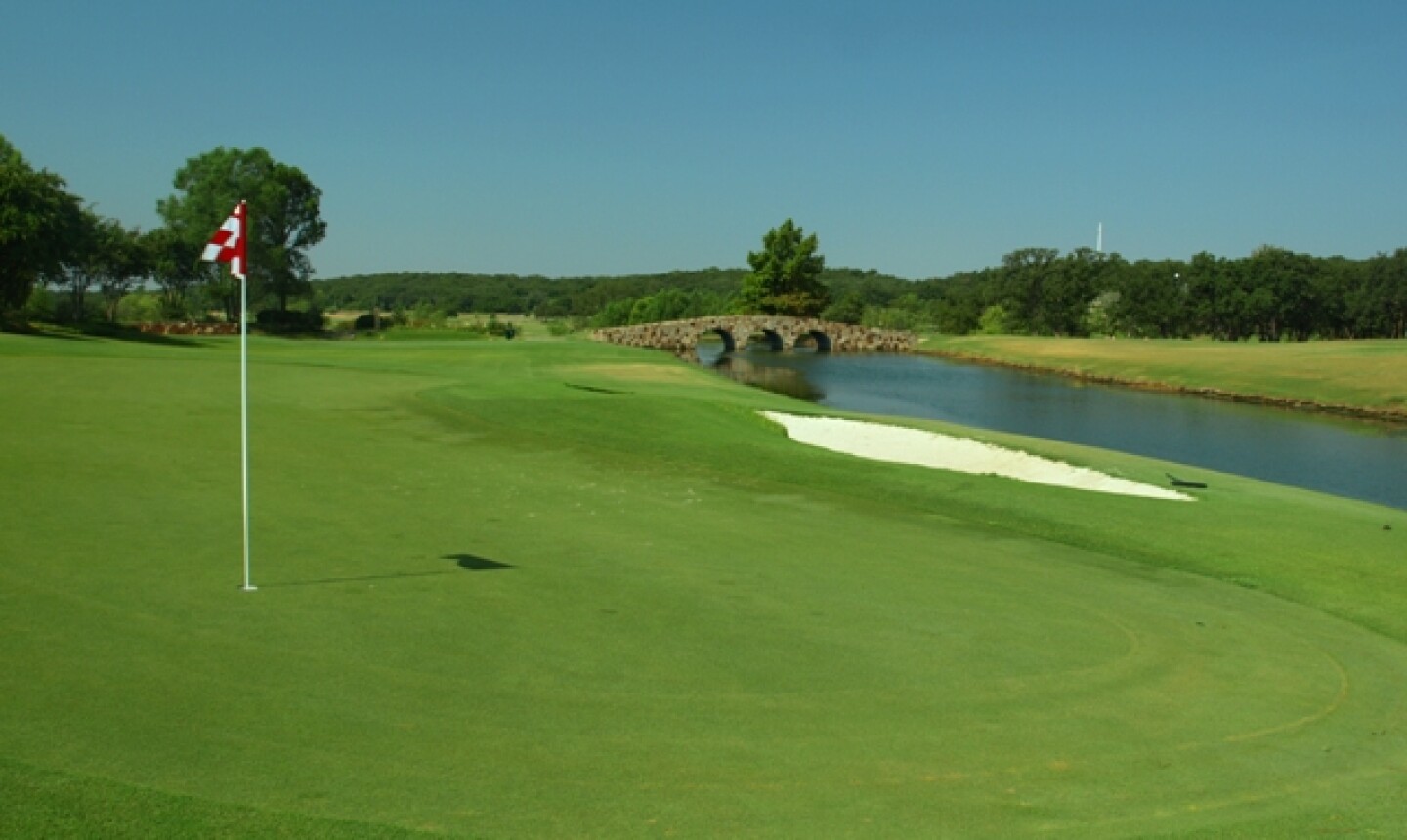 The 17th hole at Tour 18 Dallas is a replica of the 12th hole at Augusta National Golf Club. Mike Bailey/Golf Advisor 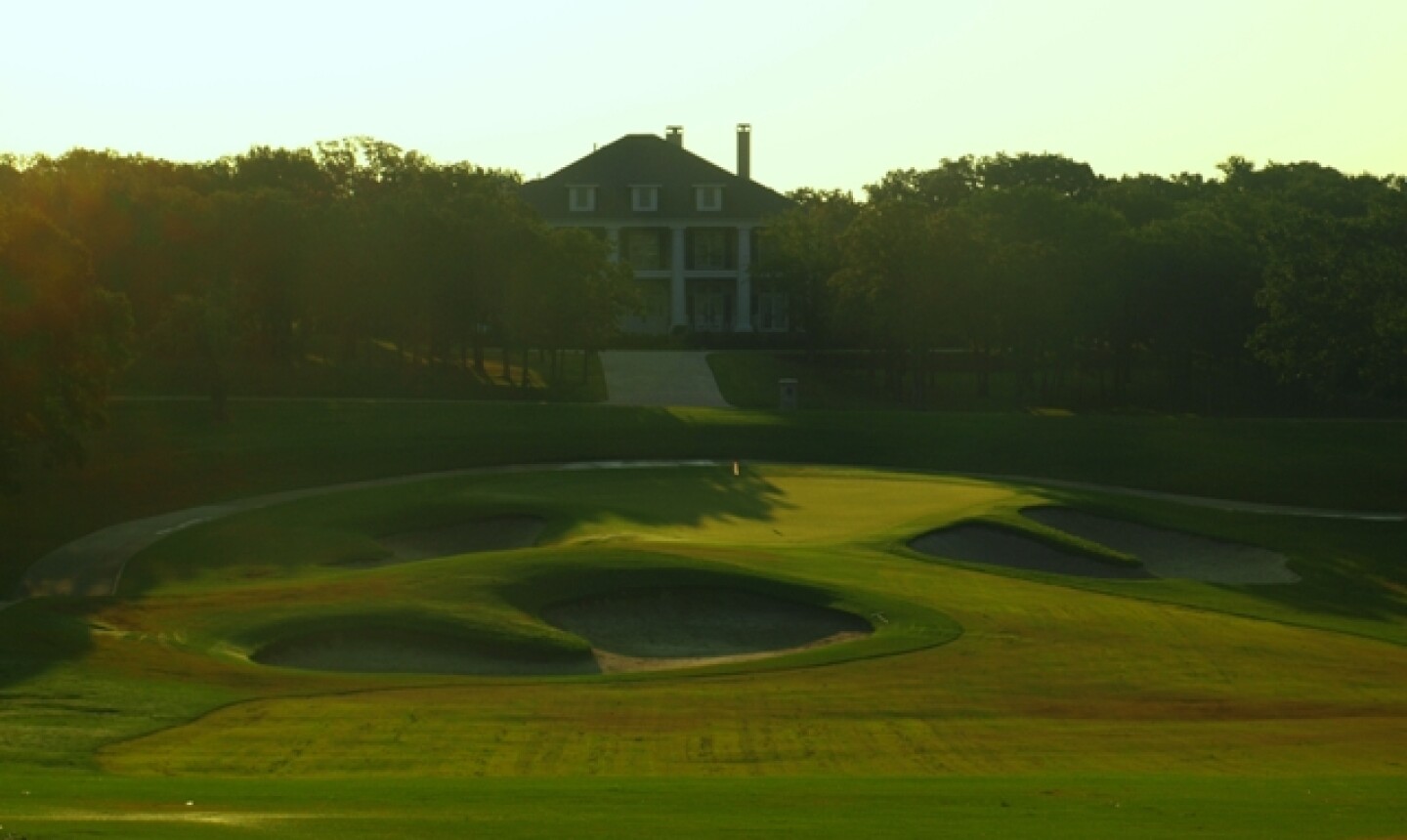 The fifth hole at Tour 18 Dallas is a simulation of the 10th hole at Winged Foot Golf Club. Mike Bailey/Golf Advisor 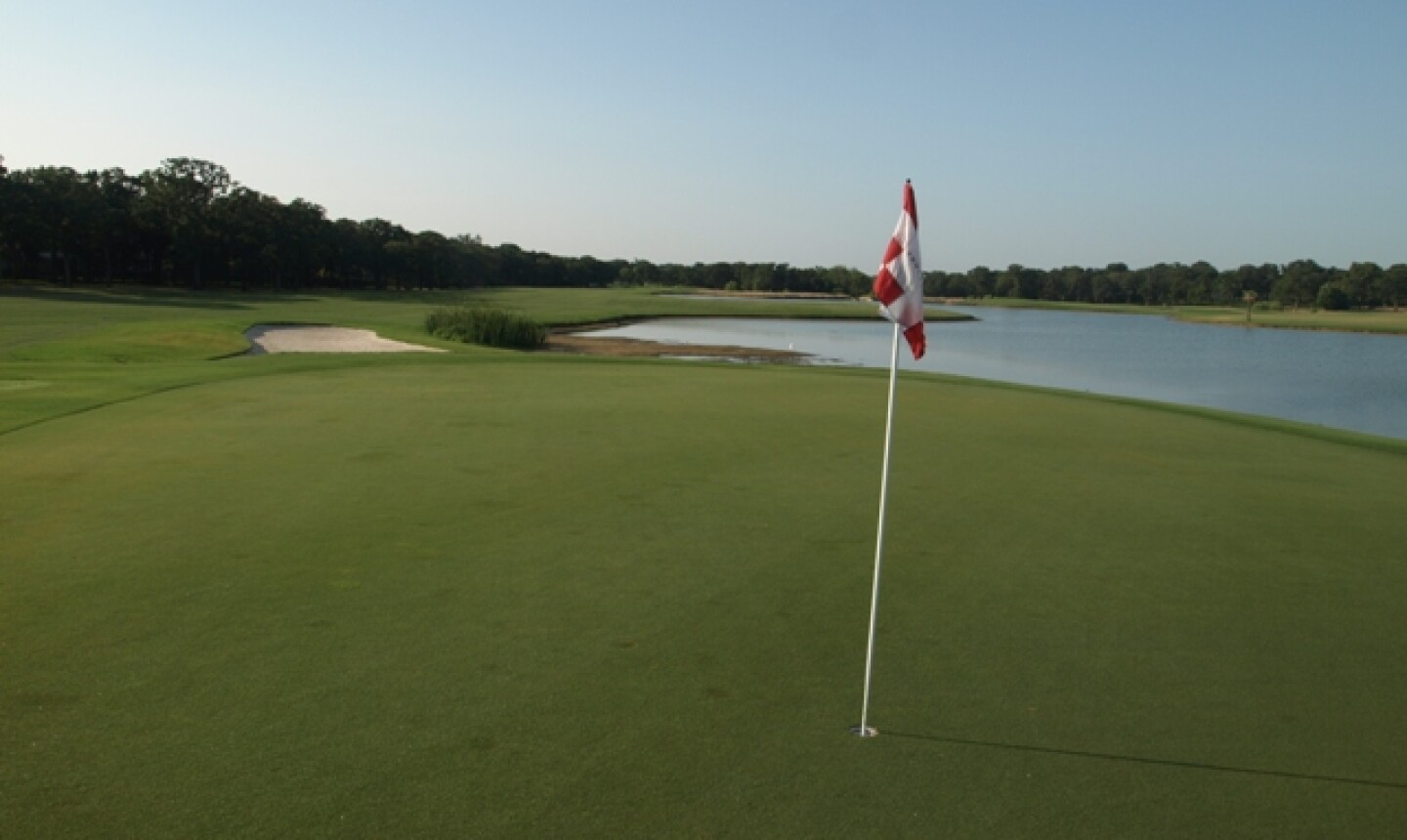 The seventh hole at Tour 18 Dallas is a representation of the 18th hole at Harbour Town Golf Links, minus some of the vegetation and the lighthouse. Mike Bailey/Golf Advisor 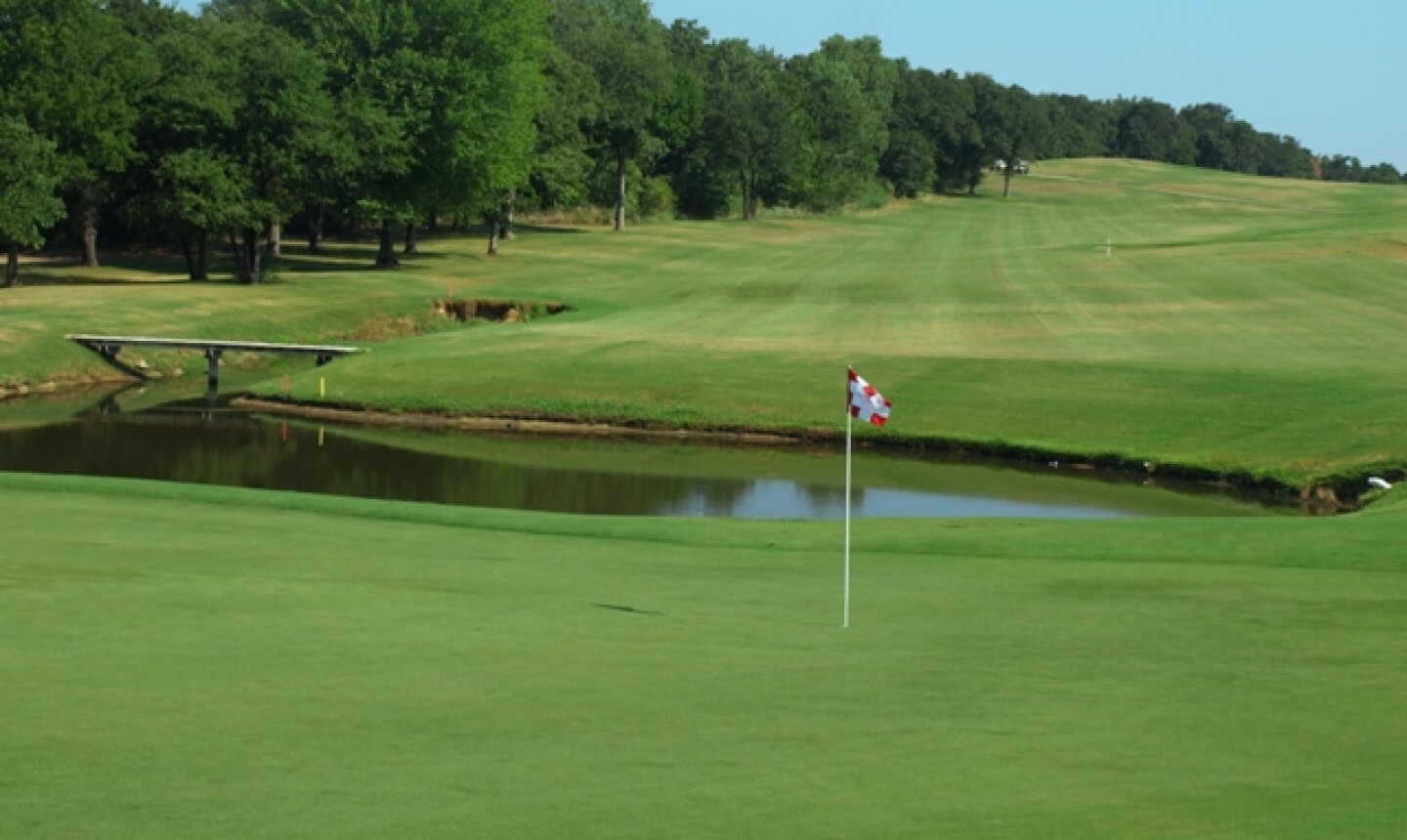 The 14th hole at Tour 18 Dallas is a simulation of the par-5 16th hole at Firestone. Mike Bailey/Golf Advisor 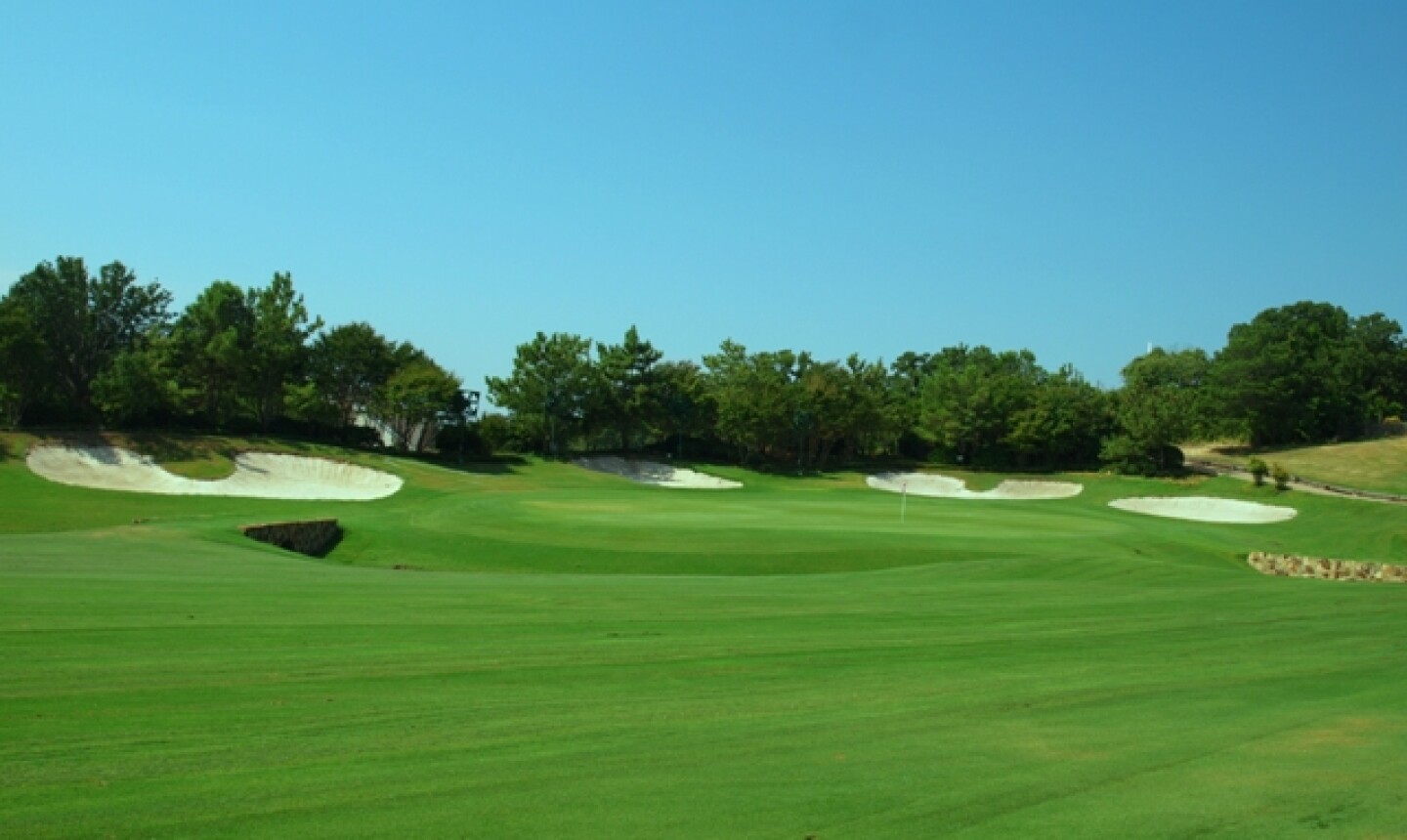 The par-5 18th hole at Tour 18 Dallas is like the famous 13th hole at Augusta National Golf Club, and it's a good risk-reward finishing hole. Mike Bailey/Golf Advisor

FLOWER MOUND, Texas -- Whether you're coming to the Dallas-Fort Worth area for the Super Bowl or any other event and decide to bring your sticks, there's one novelty you won't want to pass up: Tour 18 Dallas.

It's a collection of greatest hits, many of the favorite holes of the original owners when the daily-fee golf club opened in 1995, three years after the first such course opened in Houston.

To characterize Tour 18 Dallas as an original might seem a bit odd considering the nature of the golf course. But given that it plays so differently from the original Tour 18 Houston, the description doesn't seem like such a stretch. While the two courses have seven holes in common, including three holes designed to replicate Augusta National's famed Amen Corner, the topography in this north Dallas suburb is so different than Houston that they seem like two entirely different golf courses.

Plus, when you consider the holes that the two golf courses don't have in common, the differences are obvious. Where Tour 18 Houston opens with Harbour Town Golf Links, Tour 18 Dallas opens with the first hole at Cherry Hills, where Arnold Palmer drove the green to win the 1960 U.S. Open. And you won't find Winged Foot, Medinah or Southern Hills at Tour 18 Houston, either. You'll only find them in Dallas, which is really like Tour 18 Part 2.

In fact, originally, that's exactly what it was.

Tour 18 challenged but not defeated

Tour 18 was such an immediate hit in the Houston area that opening a location in the state's other population center seemed like a no-brainer. So three years later, the Flower Mound edition was born.

Soon after, the concept was challenged legally by some of the original venues. It seemed that owners of courses such as Harbour Town, Pinehurst No. 2 and Pebble Beach didn't want replicas opening throughout the country. As a result, certain concessions had to be made, including the removal of the red and white lighthouse behind the facsimile of Harbour Town's 18th hole on both courses.

In the end, though, it was a victory of sorts for Tour 18 and golfers, most of whom will never get to play the original courses. And while these are the only two Tour 18s, other replica-type courses did spring up elsewhere.

Like Houston, the most popular recreations at Tour 18 Dallas are the Augusta National holes and the island green at the Stadium Course at TPC Sawgrass. In both cases, the Sawgrass hole is the ninth at Tour 18. But the biggest difference between the two is the treatment of Amen Corner.

In particular, Tour 18 Dallas closes with Amen Corner, while it's on the front nine in Houston. And unlike Houston, tall pines aren't indigenous to the region, so that element is missing. Still, it's the main draw. Golfers come into the 16th hole knowing they have to play away from the pond left of the green just like they would at Augusta's 11th. They know they have to pull the right club on the shallow green of the par-3 17th (Augusta's 12th). And with a good drive, you can hit the par-5 18th in two, just like you can at Augusta's dogleg left par-5 13th.

"It almost kills our twilight golfer," said General Manager Nic Edwards. "Some of them ask if they can start on the back nine, but of course we can't do that. They all want to play the Augusta holes."

Tour 18 Dallas probably isn't the kind of golf course you would want to play every day, but if you're visiting the Dallas area, this should be on the short list. It's just plain fun.

Even if you've played the Houston version, you'll still want to check Dallas out. There are enough new holes to experience that make the courses significantly different. Houston probably does a little better job with the Augusta National holes because of the pine trees, but Dallas excels on other holes such as Oakmont Country Club's third and its church pew bunkers.

Also, there was a time not too long ago that Tour 18 Dallas went through some lean years, but it has rebounded under new ownership and appears to be flourishing.

In recent years, the course hasn't been overseeded wall to wall, but that could change this fall with the Super Bowl coming to town. Edwards said officials are considering overseeding the course with an expected peak in business in late January and early February.

The facility also has full service restaurant overlooking the island green ninth hole. Inside, there are flat-screen TVs for watching golf and other sports, and plenty of help to serve you. The clubhouse also has its 2,000-square-foot U.S. Open Room, designed for tournament gatherings, large events and even weddings.