What to expect at AT&T Byron Nelson's new Trinity Forest Trinity Forest will present a totally new kind of test for pros at the 2018 AT&T Byron Nelson. Courtesy of Trinity Forest 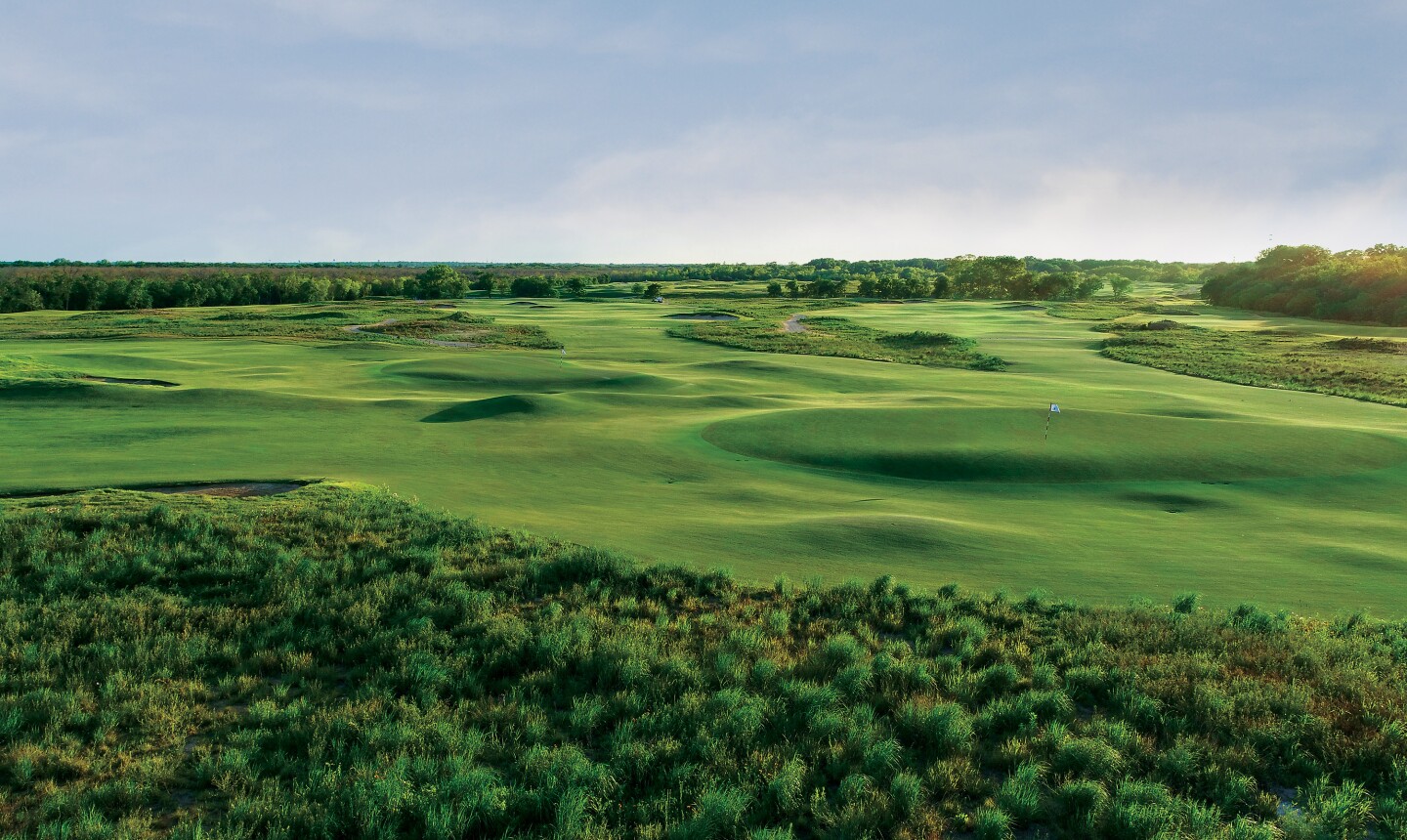 Trinity Forest is part of a forest preserve and the golf course is built on a former landfill. Courtesy of Trinity Forest

DALLAS — The latest addition to the PGA Tour circuit is unlike your standard tournament golf course.

Trinity Forest Golf Club, the new home to the AT&T Byron Nelson, is a 7,370-yard, par-71 layout designed by the team of Bill Coore and Ben Crenshaw. Forget about a well-coifed, lush look with bunkers lining the fairways and everything right in front of you. This one looks more like a holdover from an aerial bomb-drop exercise. Tour players will have to look long and hard to find what they need to maneuver around.

The 18-hole golf course is part of a new private club that occupies an abandoned landfill nine miles south of downtown Dallas. All told, it comprises 400 acres of floodplain, forest and capped construction debris, now built out to include a massive practice range that’s home to the Cameron McCormick Altus Performance Institute and a nine-hole par-3 course that serves the First Tee of Greater Dallas. The facility sits at the center of the 6,000-acre (9.4 square mile) Trinity Forest, the largest urban woodland in the country.

The course has the scruffy, links-inspired look that Coore & Crenshaw have honed at leading resort courses like Streamsong Red in Florida, Bandon Trails in Oregon and Sand Valley in Wisconsin. Except that they all occupy compelling terrain. Trinity Forest occupies relatively flat ground, with no more than 20 feet of elevation change across the site.

When Coore & Crenshaw first assessed the land, it did not show much promise. But club co-founder and president Jonas Woods, a real estate investor and commercial investment manager with experience in buying and developing golf properties in the area, proved persuasive, not least because he was closely allied with movers and shakers in town, including city officials interested in converting the abandoned landfill for community recreation.

It helped that the site did not convey the typical domed cap of most urban landfills. Nor was methane venting an issue given the underlying inorganic waste. A two-foot cover of sand was partially eroded, and when the overgrowth of scrubby trees and grasses was cut down it revealed what Coore refers to as "crumpled ground that looked like eroded seaside dunes." It looked like "it needed to be ironed," with exactly the kind of surface rivulets and native mounding they like to work with.

That’s all Coore & Crenshaw needed to get excited about the contours they had. The problem, however, was routing a golf course on what amounted to 140 acres of uplands surrounded by Trinity River floodplain and forest edge and bisected by a drainage ravine. The 5-acre clubhouse setting was also predetermined by virtue of access to a feeder highway and the need for it to be outside the floodplain or landfill. Inside those parameters, the design team had blank ground to work with.

The flow and continuity had to be created. The result is a course that spills out over the land in a way that is not suggested naturally by the terrain and that occasionally feels non-intuitive. While that’s readily handled by golfers, it will prove more problematic for moving spectators around. Coore & Crenshaw are used to having tees and greens tightly connected and don’t normally concern themselves with infrastructure issues. “We weren’t designing for a tournament,” says Coore. “We had our hands full getting the routing to work and then shaping out the features.”

Their work snuggles in, sometimes to the point where it’s indistinguishable to the eye at first glance, often because the absence of pronounced elevation or lookouts makes it hard to pick out features. Some of the PGA Tour pros will hate it. If so, that’s probably a good sign, because it means that the holes do not immediately reveal themselves and only players with patience (and good caddies) will be able to settle in.

Trinity Forest is a complicated project. It’s run as an upscale private club, with membership by invitation only at upwards of $150,000 for initiation and annual dues at $15,000. It’s a second or third membership for nearly everyone who joins. Walking is encouraged, whether with caddie in tow or with pull carts, and in the absence of paved cart paths members have use of a fleet of 20 golf boards. Outside play is strictly limited. And yet it’s also a public amenity, hosting 15+ high-profile charity events a year while serving as host to the First Tee and to SMU varsity golf.

Founder Woods has aspirations for Trinity Forest that go beyond serving as home to the ATT&T Byron Nelson. “Dallas has not been home to a professional major since the 1963 PGA Championship,” he points out. “We’ve had dialogue with the PGA of America and the USGA about that.” With the PGA of America moving its showcase major from August to May, Dallas now becomes an attractive option.

How well the site can handle huge crowds will be tested this week during the Nelson. So, too, will the golf course. With its bentgrass greens, Trinity Zoysia tees, fairways and approaches, and Buffalo grass roughs, the course presents an austere, British Open sensibility. Its 80 acres of fairways and 9,000-square foot greens are generous to an extreme by PGA Tour standards. But the proliferation of centerline bunkering will prove unsettling and leave many players with head-scratching decisions about laying up off the tee or landing approach shots short so they can play for runout. Wind on this treeless site will also be a disorienting factor.

The delicate approach to the 5th hole at Trinity Forest

The very short, invitingly drivable 315-yard, par-4 fifth will drive players nuts because of its pop-up, convex green and the looming presence of a massive bunker complex that looks tight to the green but actually ends 25 yards short.

Out in the far southwest corner of the property sits an elusive little par three, the 140-yard eighth hole, which plays to a fallaway green bisected by a ridge.

While Tour pros tend to gobble up par fives like snack food, they’ll have a lot to handle on the 630-yard, dogleg right 14th. Here, a massive mid-fairway bunker occupies the dead center of the landing area, forcing players to steer safely but longer left for a clearer second shot or play right and all but give up any chance of going for the green in two. The approach here is blind to a green sitting beyond a rise that’s protected by a very punitive cross bunker 35 yards short. Here and throughout Trinity Forest, it will take discipline to deal with seemingly arbitrary hazards.

Out here, however, there’s been nothing left to chance. Coore & Crenshaw have made a design career of thinking through what they are doing. Players will have to do the same.

Looks like another Chambers Bay disaster at first glance.

I think the whole thing sucks. The way they did it all the money Dallas put in to it and a private club. Plus not telling
The people in los Los Colinas what was going on. Big money talks!

You left off the total disregard for the fan. Parking is miles away, 100 degree temps forecasted and not a single tree or shelter on the course. Zero interest in attending from almost every golf friend I know. 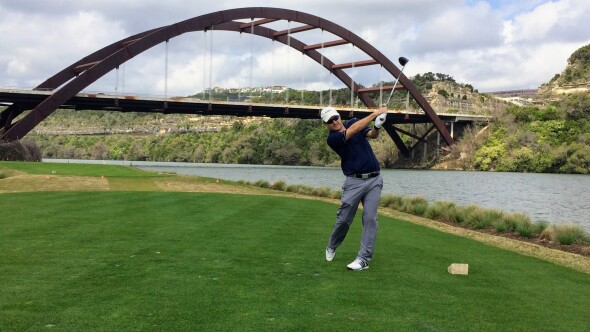 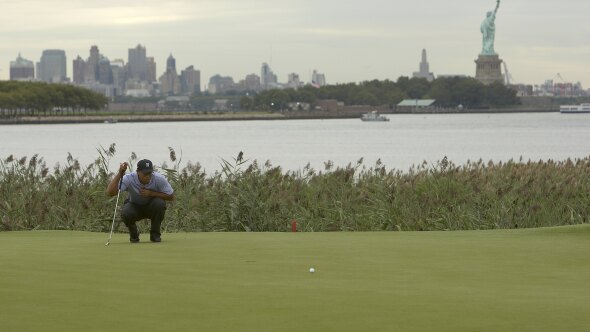 Articles
Landfills find a second life as top golf courses
Golf course architects have their hands full when they are given an old garbage dump or "brownfield" to turn into a beautiful green golf course. More than 70 have been built, including Liberty National, site of the 2017 Presidents Cup.
3 Min Read

By Tim Gavrich, Jason Scott Deegan
Read More
Load More
Popular
Reflections from the 150th Open on the Old Course at St. Andrews
Why Pinehurst is the perfect new home for the World Golf Hall of Fame
New golf courses are elevating Brainerd's status among the Midwest's best summer destinations
Play where the pros play on the new 2022-23 PGA TOUR schedule
Editorial Staff